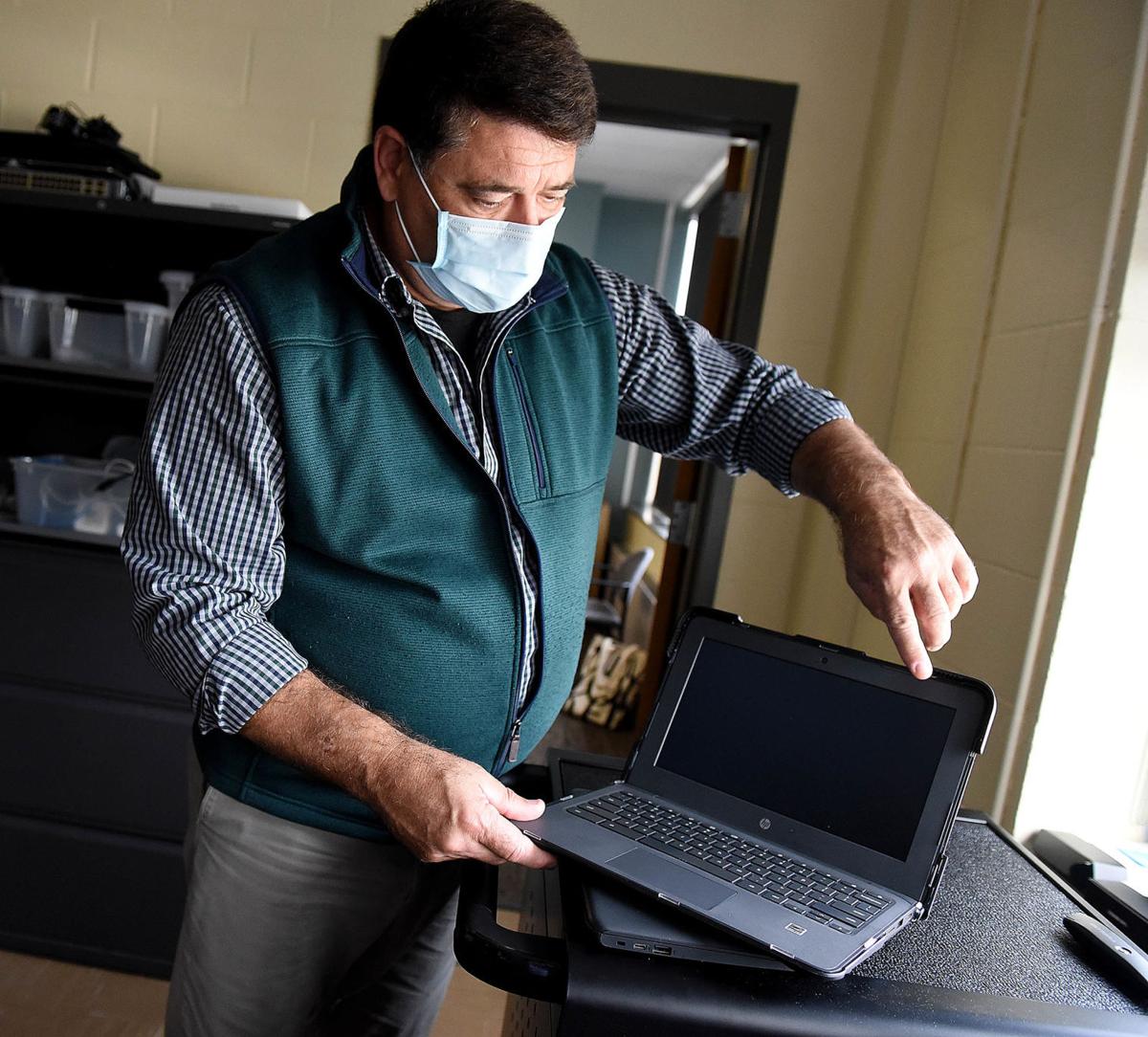 Steve Cross, chief information officer for the Manchester School District, points to protection bumpers he is trying to get for Chromebooks issued to students. 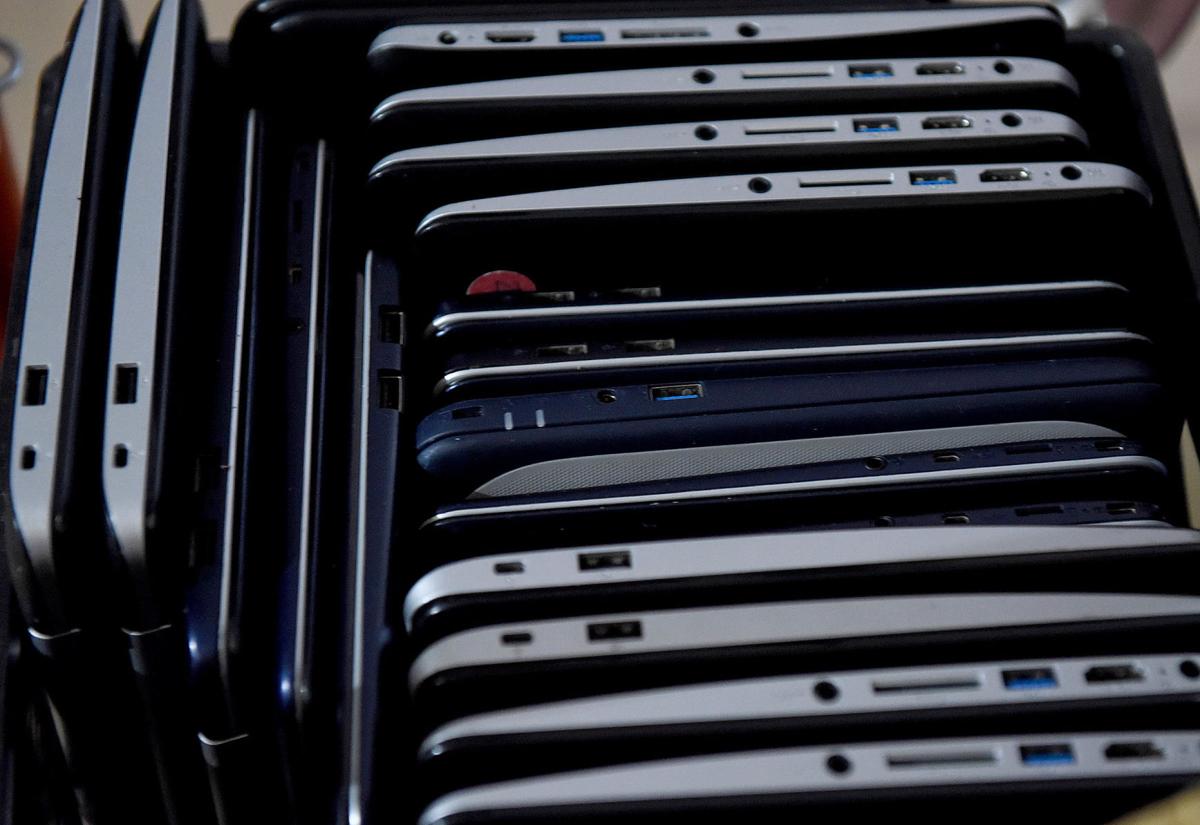 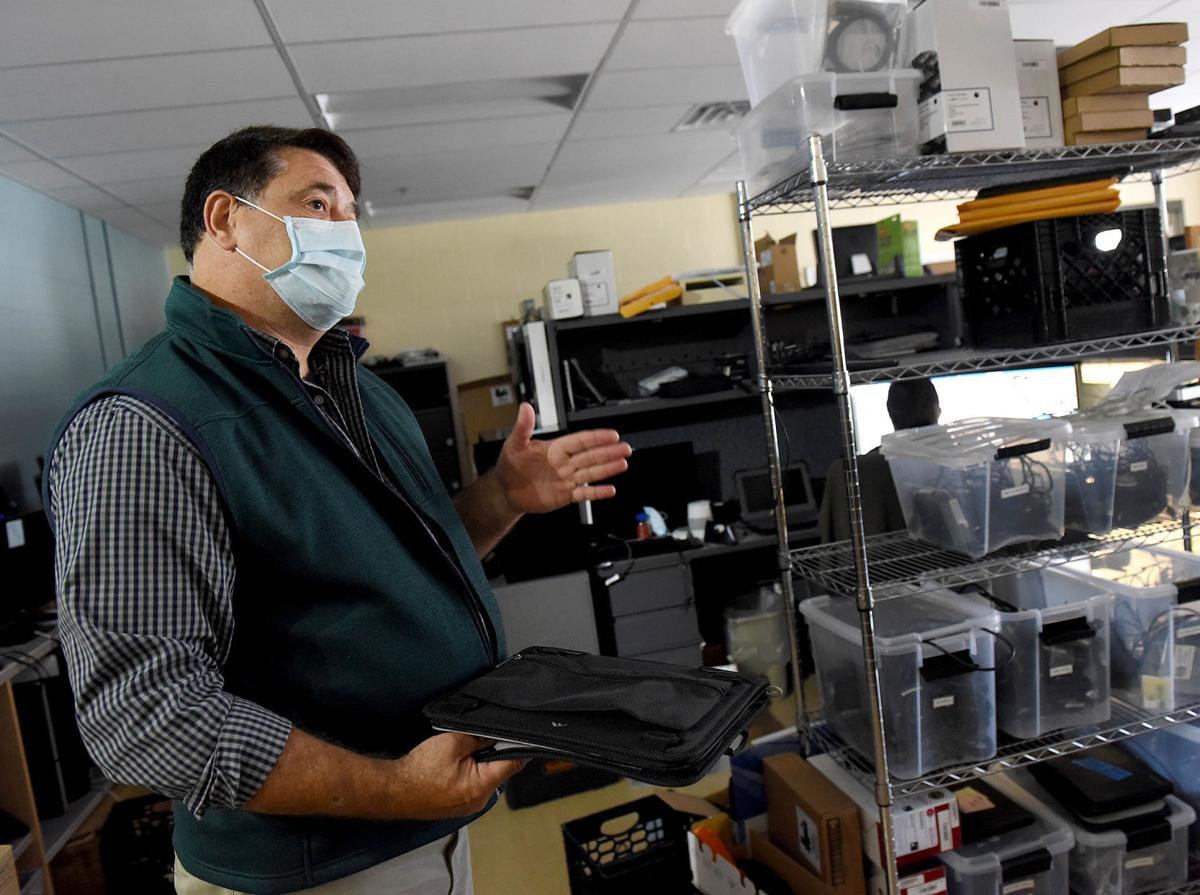 Steve Cross, chief information officer for the Manchester School District, talks about Chromebooks during a tour at the district’s information technology office on Sept. 17.

Steve Cross, chief information officer for the Manchester School District, points to protection bumpers he is trying to get for Chromebooks issued to students.

Steve Cross, chief information officer for the Manchester School District, talks about Chromebooks during a tour at the district’s information technology office on Sept. 17.

The shift to remote learning over a weekend in March meant Manchester had to make sure every student had a computer to use for schoolwork.

At the beginning of 2020, Manchester was a “two-to-one” district — two students to one computer, he said. Cross had replaced thousands of outdated laptops before the pandemic and has purchased thousands more, but some students are still waiting.

“We have 3,100 Chromebooks on order, and we have no idea when we’re going to get those,” he said.

Some schools had a surplus of Chromebooks, so Cross engineered a way to loan some of those schools’ devices to other schools.

“That’s how we’ve been getting devices into the hands of families, moving things around,” Cross said. “We had to scrounge. It was ‘do whatever we can,’ to make sure everybody’s up and working.”

In other districts, particularly in wealthier towns, a laptop for every student is the standard. Providing a computer or tablet for every child is meant to give equal access to online resources, and help all students get comfortable using computers.

Concord already had computers and tablets for most children, said Pam McLeod, director of technology for Concord schools. Students in middle and high school were already taking the computers home.

The challenge in Concord isn’t finding enough computers, but making sure they stay in good repair, and helping students and families use them.

“We’re struggling with families who don’t usually use any kind of technology,” McLeod said.

The shift to remote learning and take-home computers means some of the Manchester School District’s past money-saving moves are now costing the schools.

When Manchester students were using Chromebooks in the classroom, they were stored in locked metal carts in the classroom. The district was able to save about $1 million by forgoing cases and insurance for the devices, Cross said.

Now, with children and teenagers bringing computers home, the district needs tough cases. But Manchester doesn’t have the money to buy computer cases.

“They’re expensive, and we need over 9,000 cases, and we don’t have the money to buy any,” Cross said. “We’re just going to have to hope the kids take care of them.”

Well over 1,000 Chromebooks have already passed through the technology office for repairs, Cross said, and repairs are now a full-time job for some of his staff.

As more students start to come back to classrooms, there’s even more potential for damaging laptops as students take them to and from school. Cross said the district is trying to get computer cases with handles for these students. Each new learning model has presented new technology challenges, Cross said.

“You have to adapt to and think of every scenario,” he said.

Cross said funding has been a huge barrier to making the remote learning experience better for Manchester children.

“We don’t have the funds to buy everything that we need,” Cross said.

The IT department got about $34,000 in CARES Act funds, part of the federal relief bill passed in March. The money has been used to buy equipment that will make remote learning easier for teachers and better for students, like 50 cameras that can follow teachers as they walk around their classrooms.

Cross pointed to the $3.5 million in state education funds that the city’s Board of Mayor and Aldermen voted to use to lower the tax rate instead of spend in schools. An additional $3.5 million would have come in handy this fall, he said.

In Concord, McLeod said the district has spent more than $150,000 just on new software subscriptions. The Concord technology department got some of the district’s CARES Act money too, McLeod said, but she said there are a lot of competing priorities for a limited amount of money — including protective gear for teachers and other school staff.

Cross and his staff said they thought investments in technology would pay off long after the pandemic is over.

Kelly Jobel, Manchester’s data and technology integrator and former classroom teacher, said she thinks remote learning is here to stay. Students can learn on snow days, she said, or a substitute teacher can supervise students through a teacher’s pre-recorded lesson.

Jobel added that the district has seen more families engaging through the online portals, connecting with teachers online. Manchester had long struggled to get families onto the portal, so Jobel sees that as one small silver lining.

Beyond remote learning, Cross said he thinks getting students comfortable using computers and other technology will help them in the long run.

“Kids have to learn technology. Nothing runs without technology,” Cross said. “The funding has to be put where it needs to be to get these kids educated, to put them in a good place to where they’re going to be competitive in the job market.”

The man tasked with overseeing reforms that address a history of sexual misconduct at St. Paul’s School in Concord abruptly resigned on Monday, citing an “intolerable working environment.”

Merrimack Middle School has temporarily closed its building and is implementing remote learning after a staff member tested positive for COVID-19.

More than 20 Olympic athletes, including 10 gold medal winners, want Dartmouth College to bring back the men’s and women’s swimming teams eliminated this year because of COVID-19 financial losses.

The University of New Hampshire and the U.S. Department of Energy National Laboratories have launched a webinar series that celebrates innovation.