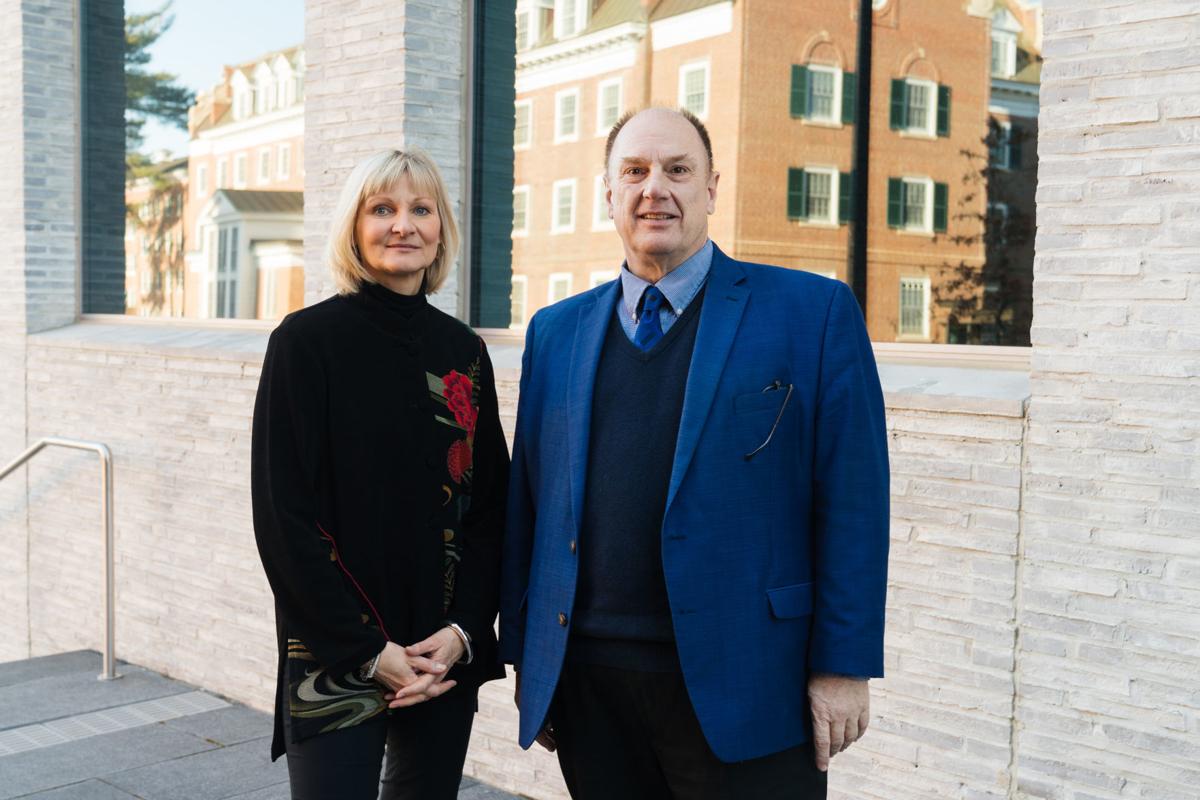 The Hood Museum’s John Stomberg and Dean of Dartmouth College Libraries Sue Mehrer hope the $500,000 grant from the Andrew W. Mellon Foundation will hep the institutions develop a better system for understanding the Native American and indigenous-peoples collections. 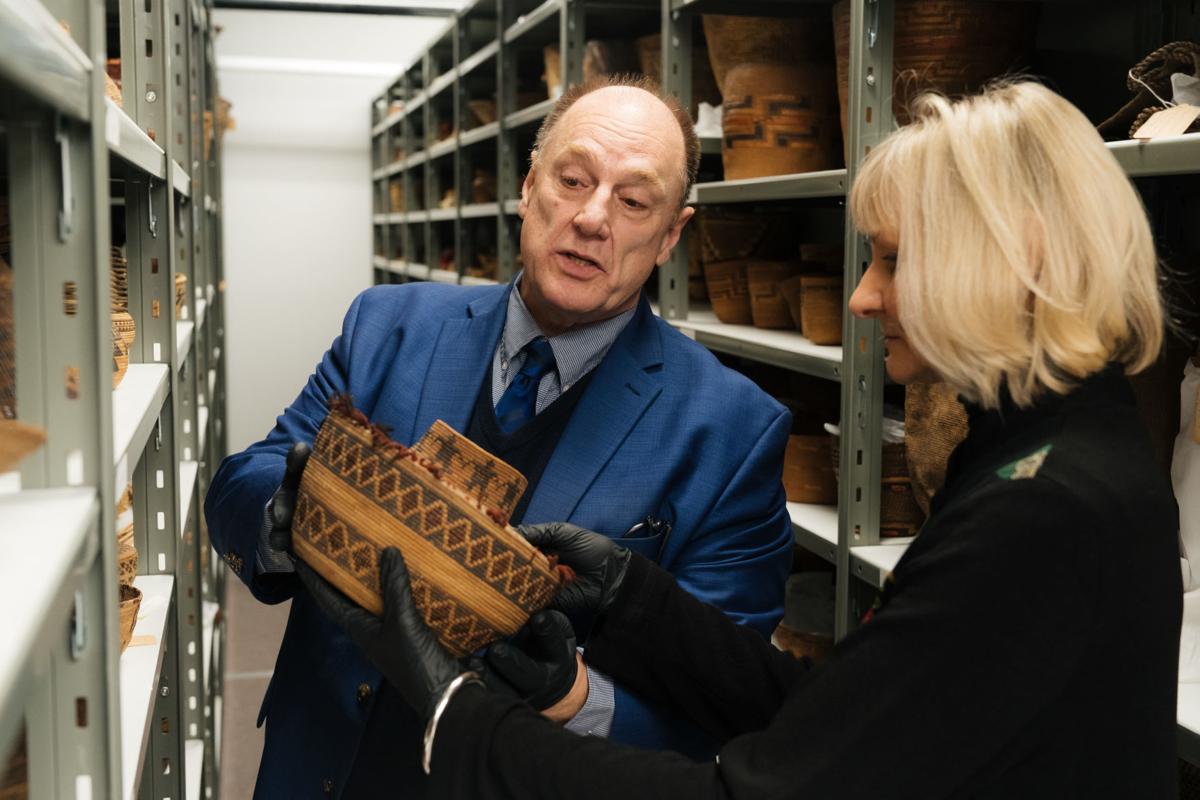 John Stomberg and Sue Mehrer look at a 19th-century basket from the Yokuts, a Native American tribe from central California. Items such as the basket, part of the Hood Museum’s collection, will be used in teaching and research supported by the $500,000 Andrew W. Mellon Foundation grant.

HANOVER — What if everything we know about Native American and other indigenous cultures is wrong — not because the facts are wrong, but because the way we handle these facts is twisting the truth?

That is the proposition John Stomberg, the director of the Hood Museum of Art, and Sue Mehrer, Dartmouth College’s dean of libraries, want to have explored as the institutions team up over the next three years thanks to a $500,000 grant from the Andrew W. Mellon Foundation.

Stomberg said the way in which western institutions like museums and libraries catalogue and process information comes from the European Enlightenment of the 17th and 18th centuries, and those methods are not capable of appropriately dealing with other cultures.

“The ways of codifying information and thought, by squeezing indigenous and Native American knowledge into that framework, we lost a lot,” he said. “We’re distorting the knowledge by the very way we organize it.”

Both the Hood and the Dartmouth libraries have artifacts from Native American and Arctic indigenous cultures. Mehrer said the museum and college use the collections for research and teaching, but that new systems are needed to not do harm to knowledge behind the collections.

“It’s quite different when you’re talking about indigenous communities,” she said.

Stomberg said that when he speaks with Native American and indigenous-cultures scholars about different artifacts and histories, he’s often struck by the shortcomings of attempts to categorize the information.

“I’m often being corrected by Native Americans with, ‘well, sort of,”’ or, ‘you could say that but it’s not really accurate,’” Stomberg said.

Stomberg said the methods of separating out and dividing information does not work with Native American and other indigenous cultures. As an example, he said scholars too often mislabel Native American artifacts as ritualistic, when the true value and meaning of the artifact is somewhat different.

“We call it a ritual pipe, or a ritual basket, but what we mean by ritual means it’s just part of life for a Native person,” Stomberg said. “We apply that term almost willy-nilly to objects that come from Native American and indigenous communities.”

Some thinkers tend to separate out religious practices and beliefs from everyday living, Stomberg said, while that is not necessarily the case for Native American peoples. Creating this sort of divide does damage to the understanding of artifacts, culture and history of these peoples.

“Things are either religious or not in the way we describe them in our museum,” he’s said. “But for some Native people there is no distinction; all of life can be, in a way, rife with spiritual belief.”

Realizing that not only did they have a problem with how they store and process artifacts, Stomberg and Mehrer also knew they would need help.

“We weren’t the people to fix this,” Stomberg said.

The grant will fund two positions at the museum and libraries to facilitate a different understanding of the cultures and artifacts, he said. Mehrer said the goal is to look at the systems as a whole and develop new ways of understanding.

“Part of our exploration is thinking about our infrastructure, exploring and describing the collections, and bringing in indigenous voices into that dialogue,” she said.

Stomberg hopes the people they bring in will help connect the museum and library staff with Native American people so that they can gain a better and deeper understanding of the collections.

“We’re going to be working with Native communities and indigenous scholars to come up with ways to open up and reorganize knowledge and histories,” he said. “We don’t have a specific goal, we don’t want to rewrite the encyclopedia — we want to open it up.”

Stomberg said the grant will hopefully help the museum and library to be a resource for Native American and other indigenous people, so that their histories and cultures are better preserved and are more accessible. The grant will help the institutions get going on the path to a better system, he said.

“How do we create a system where we’re not always getting it wrong?” he said.

Dartmouth was founded 250 years ago with the purpose of providing education for Native American peoples. However, for the first two hundred years of its existence, Dartmouth saw only 19 Native Americans graduate. The college started making changes in the 1960s and 1970s, and has since enrolled about 1,000 Native American students.

New Hampshire’s congressional delegation criticized an ICE proposal that could force international college students to leave the country if they take only online classes.

The Trump administration could allow families to use federal education funding elsewhere if the local public school does not open during the coronavirus pandemic, the U.S. education secretary said on Thursday.

The Nashua School District will announce in early August how it plans to reopen city schools this fall, according to Superintendent Jahmal Mosely.