Whether police officers should remain in New Hampshire schools — and if they do what limitations they should face — remains a contentious topic for a commission studying police reform in the state.

A defense lawyer on the 14-member panel this week called for taking police out of schools, and replacing them with social workers or psychologists.

“Our children, and the schools they attend, are not the places where the dangerous elements in our society are,” said public defender Julian Jefferson, who practices in Manchester, in comments submitted to the commission. 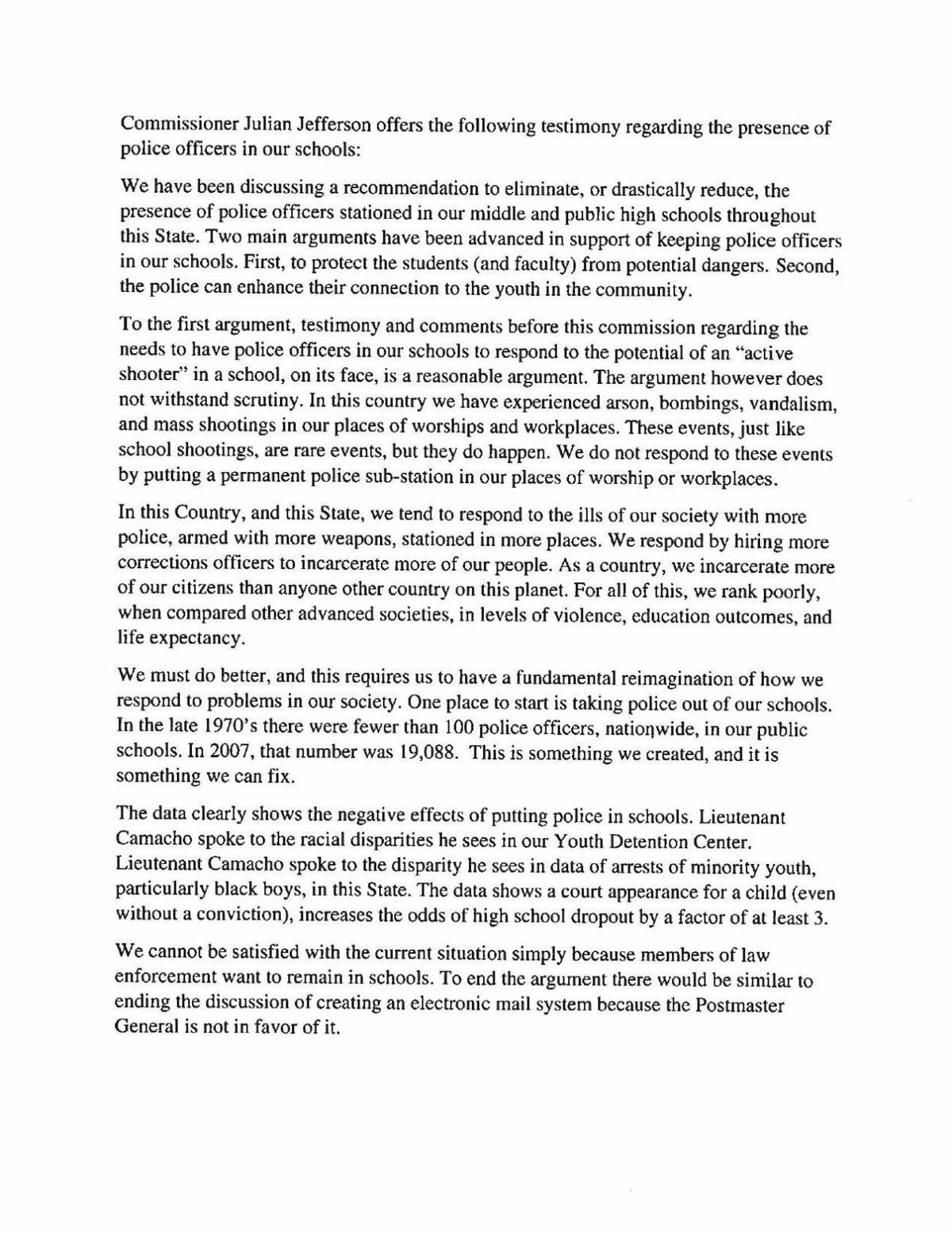 Jefferson has faulted school resource officers for arresting preteens. And he recounted a recent felony riot charge against a black high school student after he punched someone who called him a racial slur.

He said the fight involved nine students and was witnessed by more than 200. Eight additional officers had to be called in, he said. The juvenile was never put into handcuffs, but was later summonsed to juvenile court, he said.

Nashua police provided details of juvenile investigations for felony crimes over the last five years and the number of juvenile riot arrests. 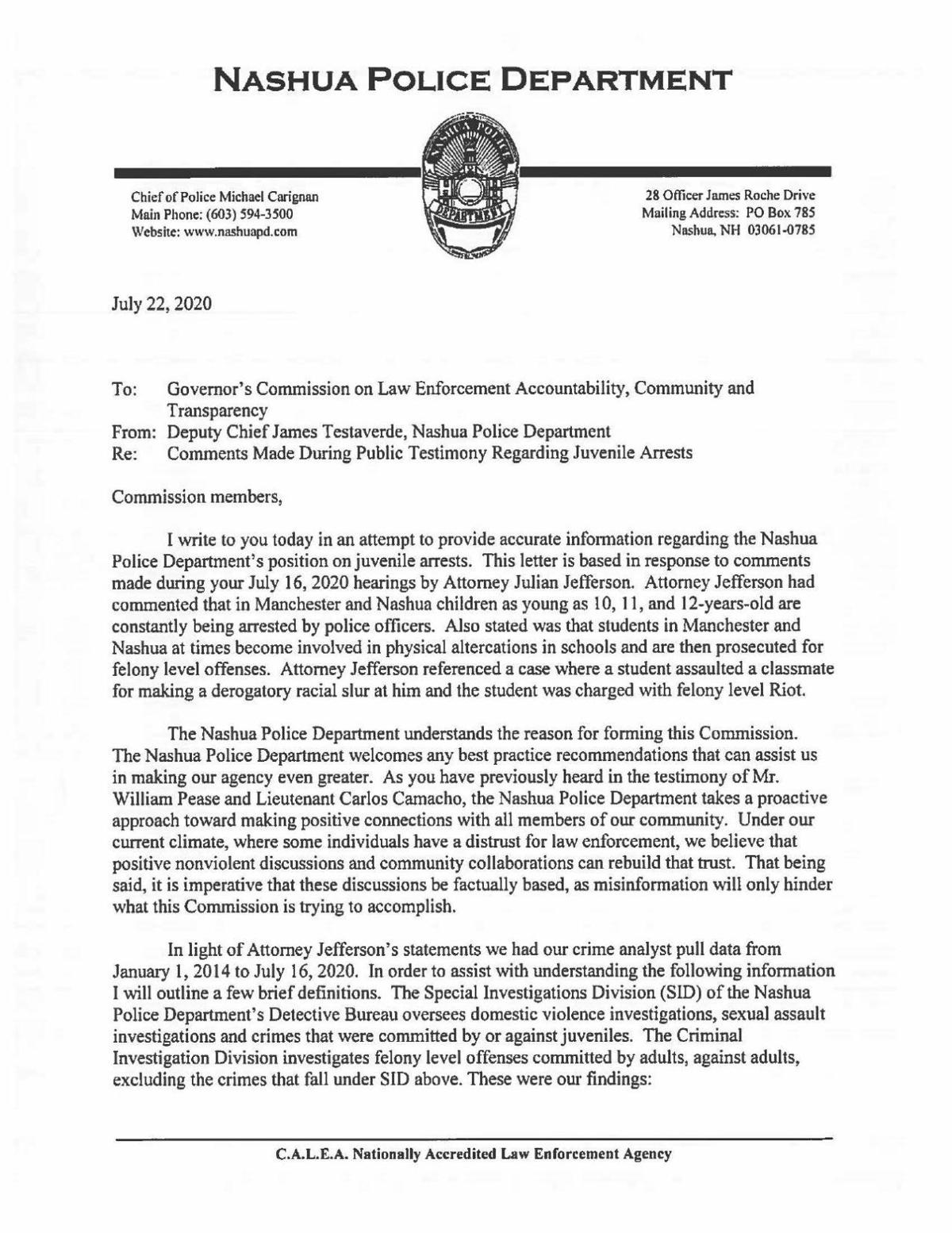 The commission meets at 9 a.m. Friday to finalize its report on issues dealing with police training and policies.

Although the future of school resource officers was initially included among the draft recommendations, members decided to take it up in subsequent sessions.

In a letter dated Wednesday, Jefferson told the commission that there are more than 19,000 police officers assigned to the nation’s schools and national data show that a court appearance by a juvenile triples his odds of becoming a dropout.

He said disparities exist in the number of arrests of black boys in the state compared to their percentage of the population.

“In this country, and this state, we tend to respond to the ills of our society with more police, armed with more weapons, stationed in more places,” he wrote.

But Larochelle said school resource officers protect students and participate in school programs both during and after school hours.

“They develop relationships with students and staff that are not only invaluable to the safety of the school, but crucial in the development and success of the students,” Larochelle wrote the commission on Wednesday. 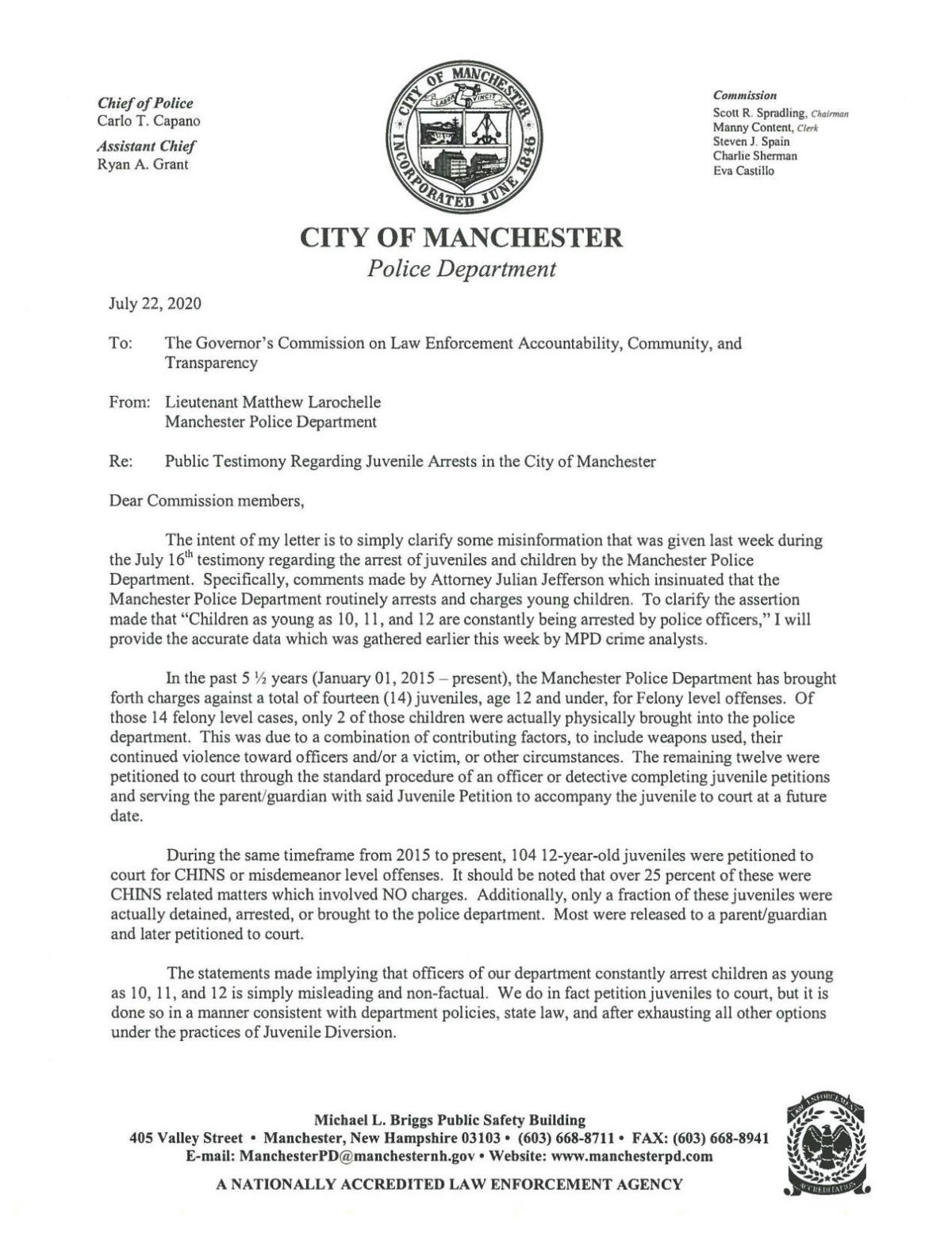 Manchester schools pay city police up to $725,000 for nine officers, who are stationed in city middle schools and high schools.

In an email, school district spokesman Andrew Toland said there is no memorandum that spells out do’s and don’ts for the officers.

A written agreement says SROs remain under the control of the police department and will make themselves available to solve any problems schools may need help with. Positive interactions with students are encouraged. 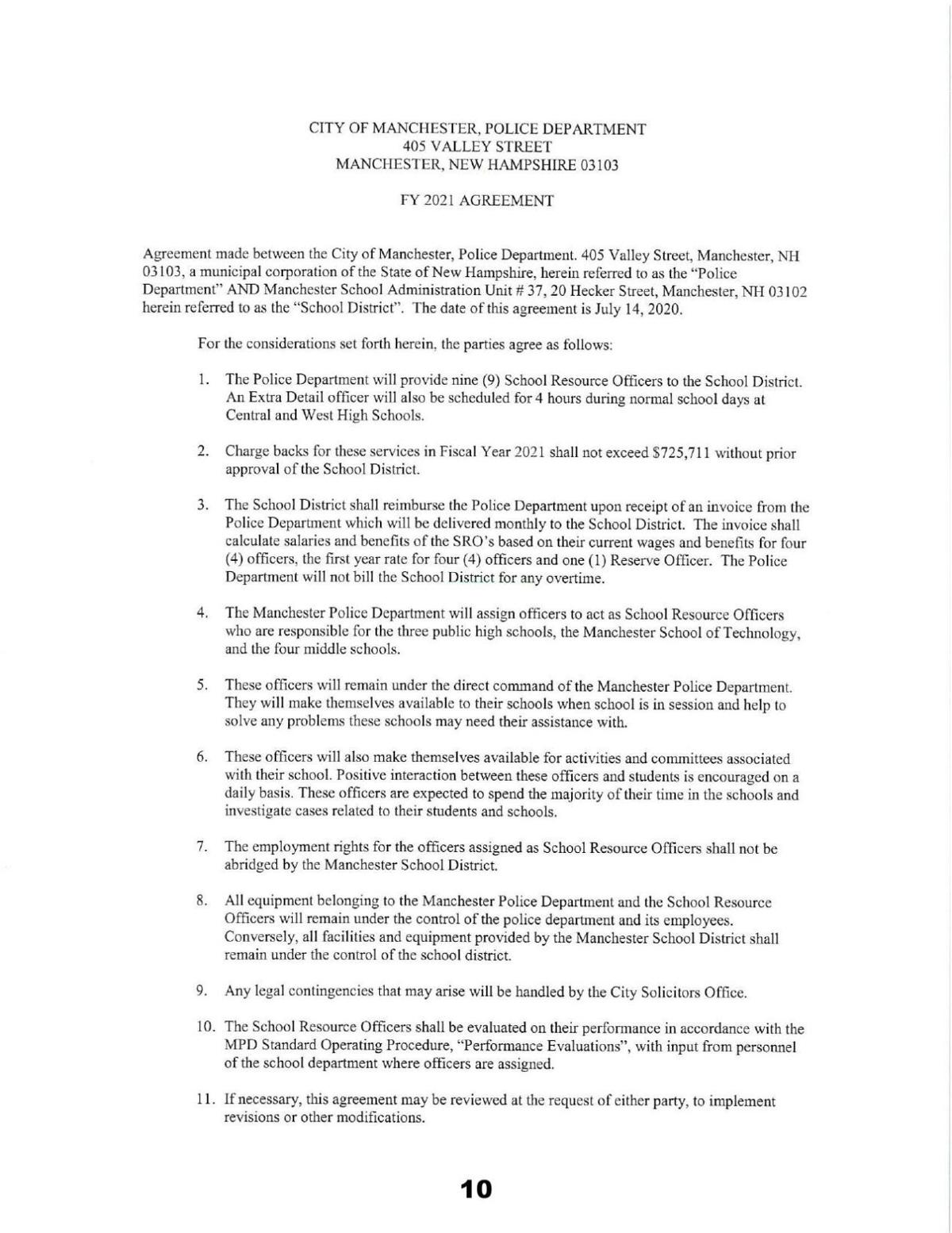 Formed in the wake of the May 25 Minneapolis police killing of George Floyd, the commission so far has limited its work to training, policies and procedures.

Recommendations will go to the governor and legislative leaders. The commission is seeking an extension to address issues of community relations, accountability and transparency.

Draft recommendations include training to address issues such as implicit bias, de-escalation techniques, mental-health awareness, use of force and an officer’s duty to intervene when another officer is misbehaving.

Recommendations call for the elimination of a special training program for part-time officers.

They encourage the state Police Standards and Training Council to work with civil liberties and civil rights groups to develop policies regarding bias and diversity.

And they call for study committees to delve into issues such as the racial makeup and mental health status of prison inmates, qualified immunity for police officers, choke holds, and the use of mental health providers rather than police to answer certain 911 calls.

Manchester, Nashua educators among seven finalists for NH Teacher of the Year

The man tasked with overseeing reforms that address a history of sexual misconduct at St. Paul’s School in Concord abruptly resigned on Monday, citing an “intolerable working environment.”

Merrimack Middle School has temporarily closed its building and is implementing remote learning after a staff member tested positive for COVID-19.

More than 20 Olympic athletes, including 10 gold medal winners, want Dartmouth College to bring back the men’s and women’s swimming teams eliminated this year because of COVID-19 financial losses.