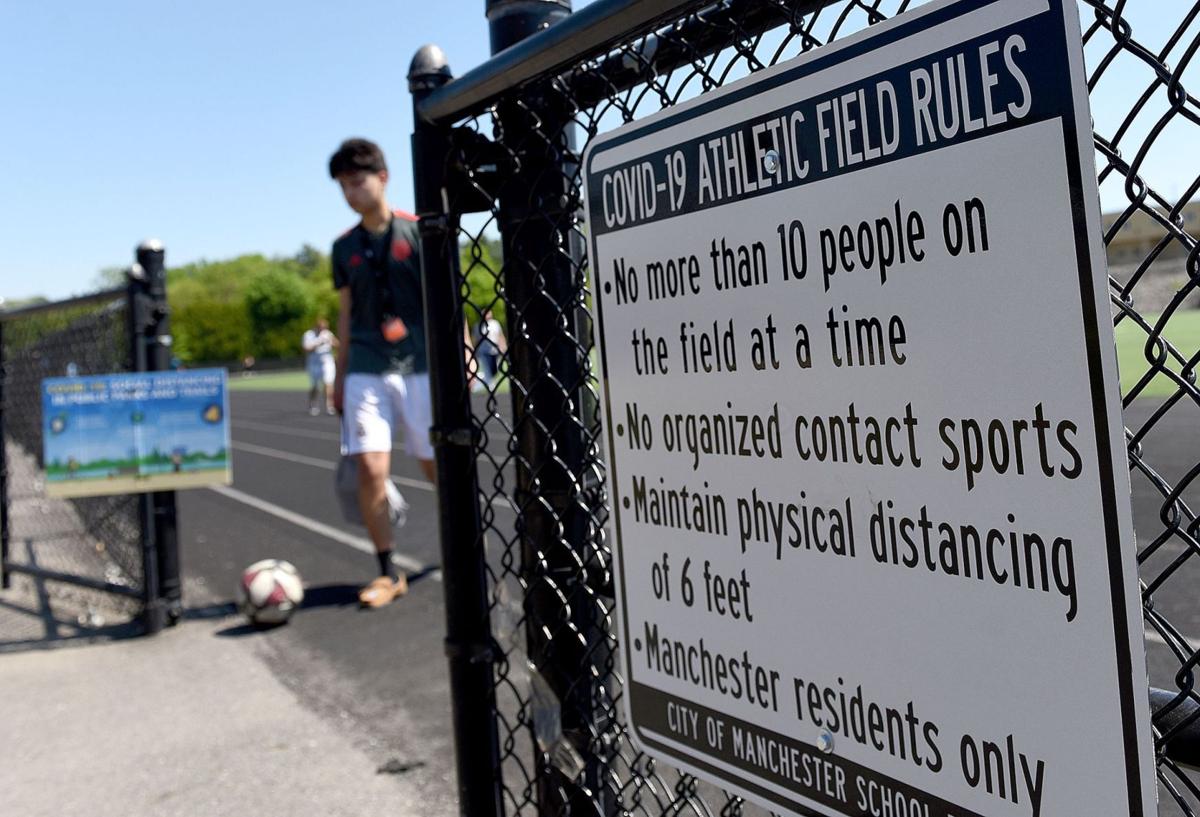 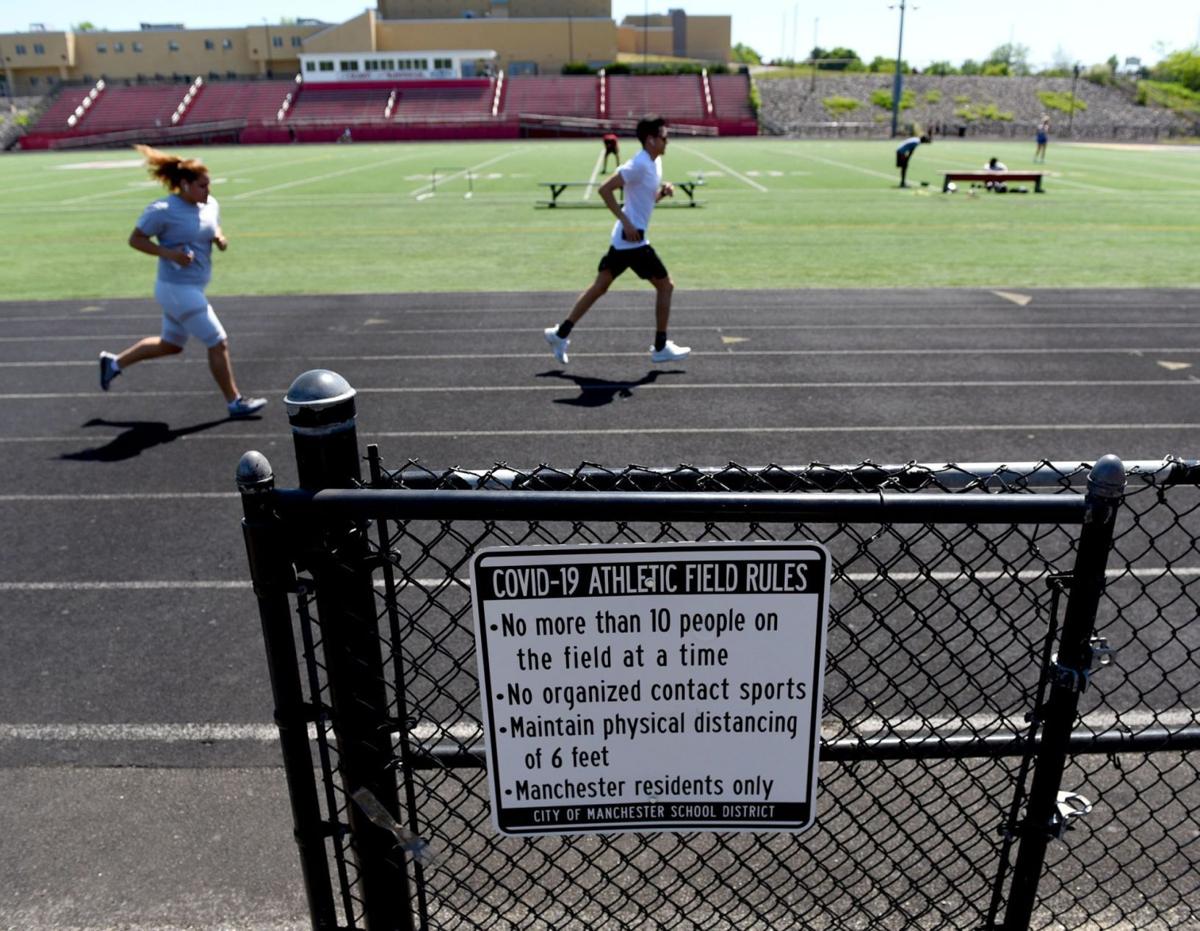 People jog around the track at Manchester Memorial High School on May 27, 2020.

People jog around the track at Manchester Memorial High School on May 27, 2020.

City school board members voted this week to authorize Superintendent John Goldhardt to close the facilities because of reports of out-of-town teams and players using them without permission during the pandemic.

Christine Pariseau-Telge, the city’s athletic director, told school board members Tuesday that earlier this month an estimated 150 “rather large” individuals were caught playing flag football on the turf field at Manchester High School West without permission. Many urinated on school buildings, she said.

When city police responded to the scene, Telge said, they didn’t feel “comfortable” removing them.

“The comments made by Ms. Telge are extremely frustrating, and show a lack of understanding on her part about what a police officer does,” Capano said. “The officers did everything they should have done.”

Telge told school board members Tuesday night that on Saturday, May 16, she and Assistant Superintendent Amy Allen received text messages and pictures showing a large group playing flag football games on the turf field at West.

“There was no one abiding by any sort of rules or wearing any sort of masks,” Telge said. “I received some texts with more pictures of these participants basically vandalizing the facilities at West High School by urinating on different buildings, because as the fields are closed we don’t have any sort of bathroom facilities down there.”

Telge said while she was there she spoke with a Manchester police officer responding to an alarm going off inside West.

Telge said she went down to the field and “proceeded to try and remove 150 rather large individuals from our West High School field.”

“Many of them were disrespectful to me, and some of them did attempt to get in my face,” Telge said.

She said eight police officers responded to West, and their presence may have spurred some in the group to leave.

“My supervisor is adamant that never took place,” Capano said. “With a group that size, I think the officers handled the situation exactly as they should. We are looking to educate people about what they can and can’t do in certain places and situations.”

Capano said signs were put up May 22 at West and Memorial declaring the fields open to Manchester residents only, limiting groups to no more than 10 people and prohibiting organized contact sports.

“My officers talked to the organizer of the game, and he said he organized it on social media and it got out of hand,” Capano said. “He never expected that many people to show up. He also told them he didn’t know they weren’t allowed to use the field, because he had seen other people using it.”

Mayor Joyce Craig said city police have been stretched thin recently because of the pandemic.

“Our police are extremely busy right now in our community, and the orders coming in from the governor’s office are extremely difficult to enforce,” she said. “What our police officers and others do is educate individuals as to what the rules are, but there’s little else they can do unless there’s a sign up — which we now have — or other information indicating this is private property.”

Telge said that with Gill Stadium and the new turf field at Trinity High School locked up, people are heading to West and Memorial, including teams from surrounding communities.

The school district is responsible for everything “inside the fence” at West and Memorial — the football fields and track sites, said Ward 9 board member Art Beaudry.

“I’d hate to lock the fields up because I know there are a lot of senior citizens in the neighborhood that like to go up there and walk and try to get some exercise,” Beaudry said.

School board vice chair Leslie Want said she has strong feelings on the fields issue.

“I walk by Trinity’s brand new park every day, and it’s locked,” said Want. “It has been locked all along, despite the fact that taxpayers paid 40% of the field. And quite honestly, it disturbs me to hear that we have people coming to our community to use our fields because they’ve chosen to lock their own fields.”

“The folks that we’ve chased off of there have all been from outside the city of Manchester,” Goldhardt said.

School board members voted 10-4 to authorize Goldhardt to lock the turf fields at West and Memorial within 10 days if the new signs prove ineffective.

Litchfield teachers are questioning the district’s new grading system, though the superintendent said they rejected training last spring that would have cleared up any confusion.

Board to vote on $1.8 million building for Nashua preschoolers

The Nashua School District is considering purchasing a $1.8 million building on Franklin Street to consolidate all 16 preschool programs into one location.

School districts across the state are seeing drops in enrollment and reporting more families homeschooling their younger children this fall.