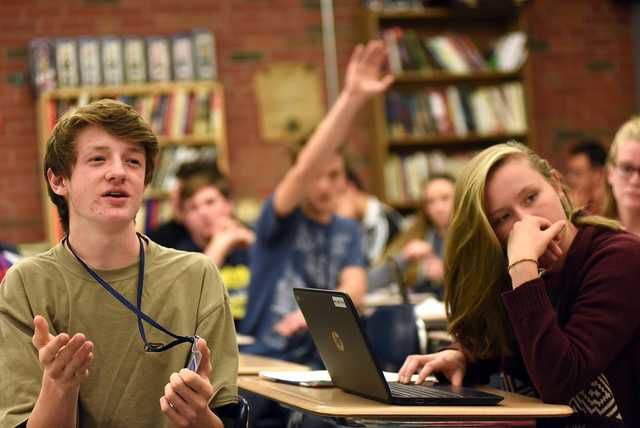 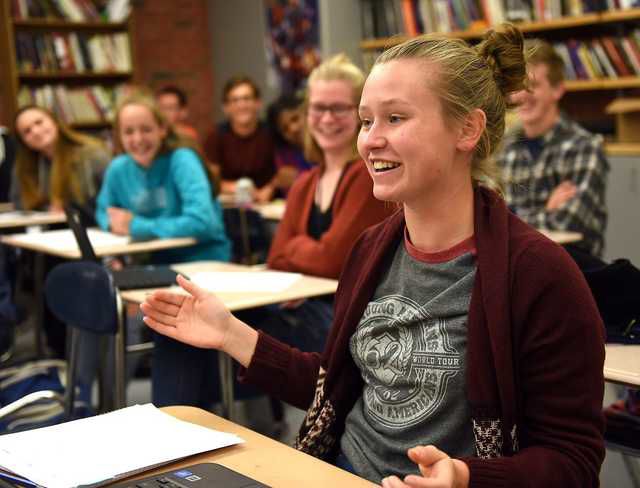 Senior Shelby Houghton makes a point during the class. 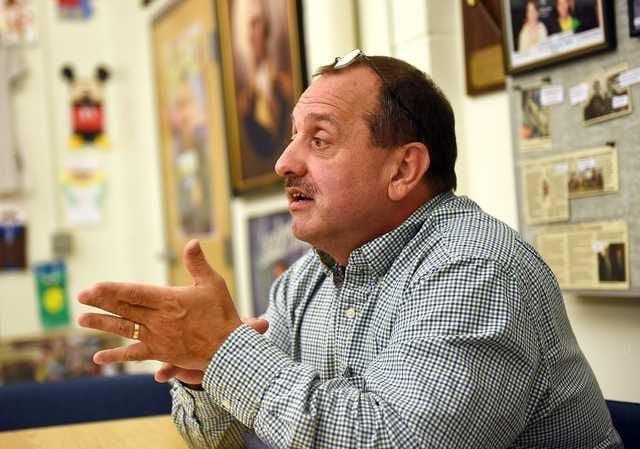 Dave Alcox, who has won national awards for teaching civics, poses questions to his students during class. 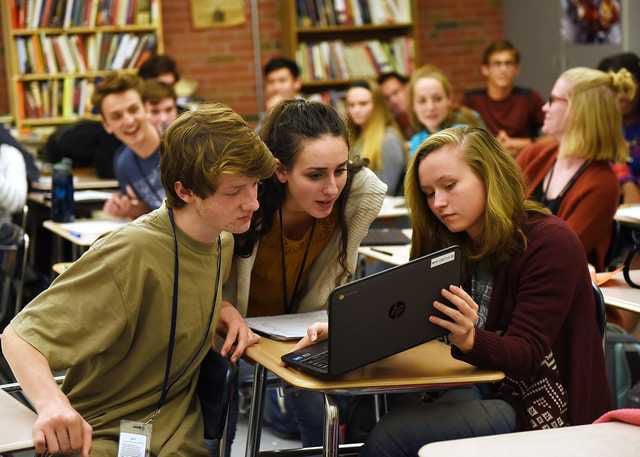 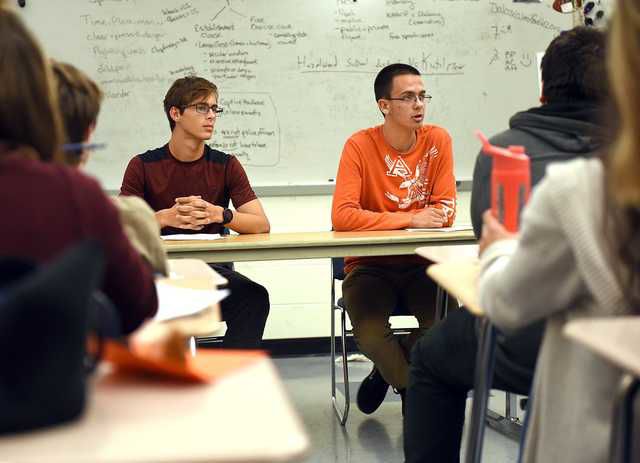 David Army, right, and Blake Audibert present a case in Dave Alcox's “We the People” class at Milford High School on Thursday. 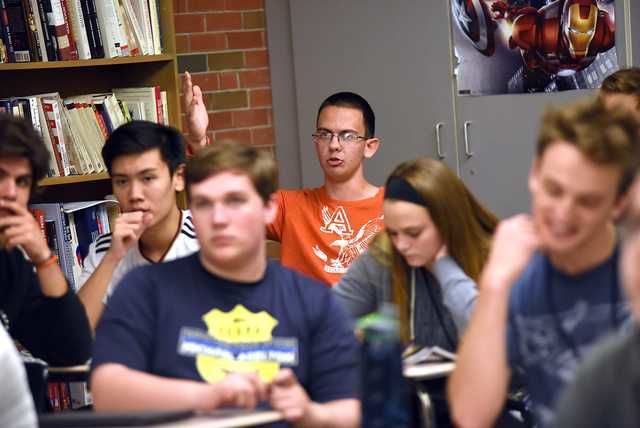 David Army, who is going into the U.S. Army in June, adds to the class discussion. 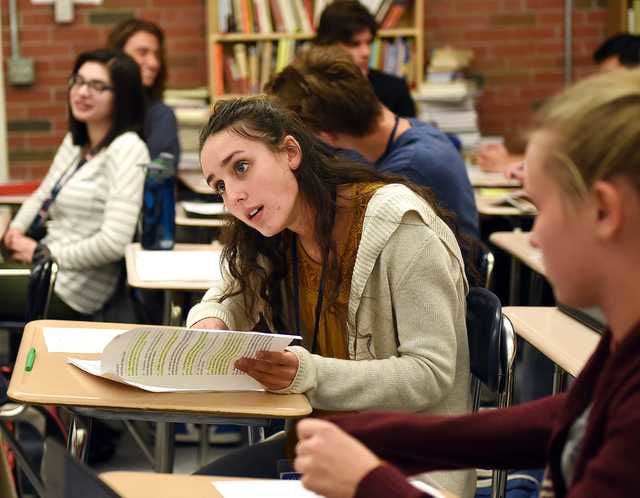 Olivia Wisbey looks over a court case before making a presentation in the civics class, which last week focused on landmark Supreme Court cases. 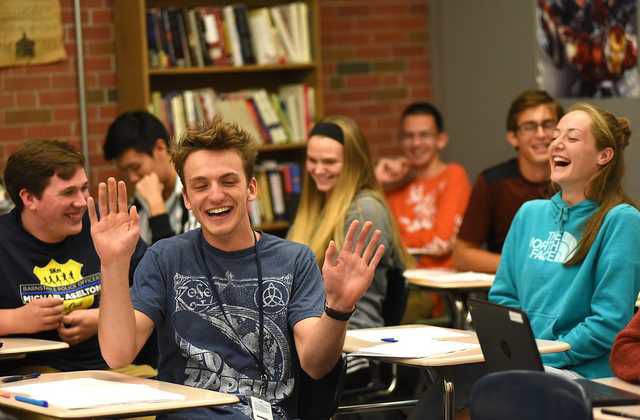 Todd Bieschke gestures after making a joke in teacher Dave Alcox's “We the People” class at Milford High School on Thursday.

Senior Shelby Houghton makes a point during the class.

Dave Alcox, who has won national awards for teaching civics, poses questions to his students during class.

David Army, right, and Blake Audibert present a case in Dave Alcox's “We the People” class at Milford High School on Thursday.

David Army, who is going into the U.S. Army in June, adds to the class discussion.

Olivia Wisbey looks over a court case before making a presentation in the civics class, which last week focused on landmark Supreme Court cases.

Todd Bieschke gestures after making a joke in teacher Dave Alcox's “We the People” class at Milford High School on Thursday.

It's the last block of the day on a perfect fall afternoon, but the energy level is soaring inside Dave Alcox's classroom at Milford High School. Even after the bell rings, students linger to finish an impassioned debate about the First Amendment.

This is "We the People," a civics education curriculum that explores the Constitution and the rights and responsibilities of citizens.

Last week, Alcox's students were presenting the arguments in landmark Supreme Court cases. The issues were weighty - and relevant.

Can schools mandate drug testing for students in extra-curricular activities? Can a principal bar a school newspaper from publishing articles about teen pregnancy and divorce? If a school offers a nondenominational prayer at the start of the day, does that violate the "establishment of religion" clause in the First Amendment?

Alcox is president of the New Hampshire Council for Social Studies; he's won national awards for teaching civics. He has a gift for engaging the students, pushing them to defend their positions, and they rise to the challenge.

Noting New Hampshire's opioid crisis, Alcox asks whether that's sufficient cause for schools here to adopt drug-testing policies across the board.

That wouldn't fly with most parents, argues Olivia Wisbey, a senior. "There needs to be a reasonable suspicion that their student is involved in drug culture," she said.

Over the 90-minute class, the students debate the school's role "in loco parentis," limits on free speech, and what constitutes a reasonable search.

They're outraged by a case involving a school with a zero-tolerance drug policy, where a school nurse searched an eighth-grader's underwear looking for ibuprofen. "That's just wrong," declares Todd Bleschke, a senior.

The Milford class, while exemplary, is not unique.

New Hampshire schools are required to teach civics as part of U.S. history and government, and legislators last year passed a law mandating civics testing in high school, including "the nature, purpose, structure, function, and history of the United States government, the rights and responsibilities of citizens, and noteworthy government and civic leaders."

But the state's social studies standards haven't been updated in more than a decade, so civics education is driven at the local level, by individual teachers and schools.

. In Hampstead, eighth-graders complete "personal action" projects designed to make a difference in their community.

. In Bedford, middle schoolers learn about political dissent by acting out the events leading up to the Boston Massacre in 1770.

. A Keene fifth-grade class drafts its own classroom Constitution at the start of the school year, setting out rules and expectations.

. And in Canterbury, elementary school students re-enact the drafting of the U.S. Constitution.

Martha Madsen, president of the New Hampshire Institute for Civics Education, said that over the past year she's seen a surge of interest in civics. A recent workshop for middle-school educators drew 60 participants, with a waiting list.

Madsen thinks the new focus on civics is in part driven by the divisiveness of political discourse in the country. "Really, people of every stripe are concerned about this," she said. "That's what makes it a hot topic."

Andrea Cameron teaches at Canterbury Elementary School, where students in third, fourth and fifth grade put on a play called "Shhh, We're Writing the Constitution," each September in honor of Constitution Day. They've even taken their show on the road, performing at schools in Belmont and Laconia.

Older students play the parts of the Founding Fathers and representatives of the 13 Colonies; younger students are in the chorus. "Because we've done it several years, they look forward to their chance to shine," Cameron said.

And when they're done with the play, students can talk knowledgeably about the debates that went on when the country was founded.

But Cameron said civics education goes beyond special projects, or memorizing facts about government or history. "I want to make them thinkers, to be able to argue in a respectful manner," she said.

Riley Matthews, 17, a senior, said a good citizen participates in the civic life of the community. "Whether it be actively doing something like protesting when they think something is wrong, standing up for what they believe in, or simply going out and voting ... and making sure their beliefs are being represented within their government."

David Army, 17, said the current climate is not what the founders envisioned. "This country wasn't supposed to be this divided," he said. "It works well when we work together."

And that makes civics education more important than ever, he said.

Army - who is going into the U.S. Army in June - identifies himself as "right-leaning," but said he gets his news from a variety of sources. "What makes this nation great is that we can live together with differing political opinions for how we should exercise those individual rights while still maintaining the overall community good," he said.

Alcox said more than 500 Milford students have taken the "We the People" class since 1998; the curriculum was developed by the Center for Civic Education in California and is administered here by the New Hampshire Bar Association's law-related education program.

It culminates in a competition in which students "testify" and answer questions before a panel of judges; Milford has been the state champ for the past six years.

Alcox said his students are lucky to live in New Hampshire, which he calls "the last bastion of democracy," with its town meeting tradition and first-in-the-nation primary. Last year's "We the People" class attended political events and volunteered at the polls on Election Day.

He wants to inspire a lifelong passion for civic involvement. "I always tell my kids, 'You're going to retire some day, but you never retire from being a citizen.'"

It seems to be working.

"I never want to be one of those citizens who complains about an issue and never contributes to the outcome," said Shelby Houghton, 17, a senior who plans to study sociology in college. "If you want things to change, you have to be part of it."

Matthews wants to be a teacher. "I feel like having all this political background ... has helped me see the world in a different way," she said.

And that, she said, "is going to help me go into the world and teach this to younger generations."

Wisbey, who wants to be a journalist, turned 18 a week ago. Friends asked if she planned to buy lottery tickets or cigarettes.

But she's excited about something else: "I can vote now."

World-class clinical research is being performed in the Granite State and the team that underpins the endeavor shares one thing in common … they are all women.

The closure of the STEM Discovery Lab at the University of New Hampshire in Manchester was jarring, said director Sarah Grosvenor. “We had kids in our classrooms one day, and the next day it was all canceled,” she said.

Manchester school board members are optimistic about the announcement that all grade levels will return to school buildings part-time in October.

WHILE OPPORTUNITIES in science, technology, engineering and mathematics continue to outpace other sectors, stigmas still exist that prevent many girls from considering such careers.