The University of New Hampshire acknowledged the ineptitude of the Granite State’s only U.S. president last year when it decided to rename its law school after him, believing the school’s reputation had supplanted Franklin Pierce’s questionable legacy.

In a document provided to the Union Leader this week, officials said the name Franklin Pierce has taken on a new, distinct meaning — derived from the school’s former identity, Franklin Pierce Law Center — separate from the president and his historical reputation.

“This separate identity connoted prestige in intellectual property law and legal education, and became recognized around the world,” read the September 2019 document.

That decision is now under attack from students and alumni who say the Democrat accommodated the expansion of slavery during his single term as president from 1853 to 1857.

“It always struck me as strange that an educational institution, let alone one dedicated to the study of law, the Constitution and justice, is named after a president they will privately admit was inept,” said Garth Corriveau, a graduate who has been vocal in his opposition to the Franklin Pierce name. 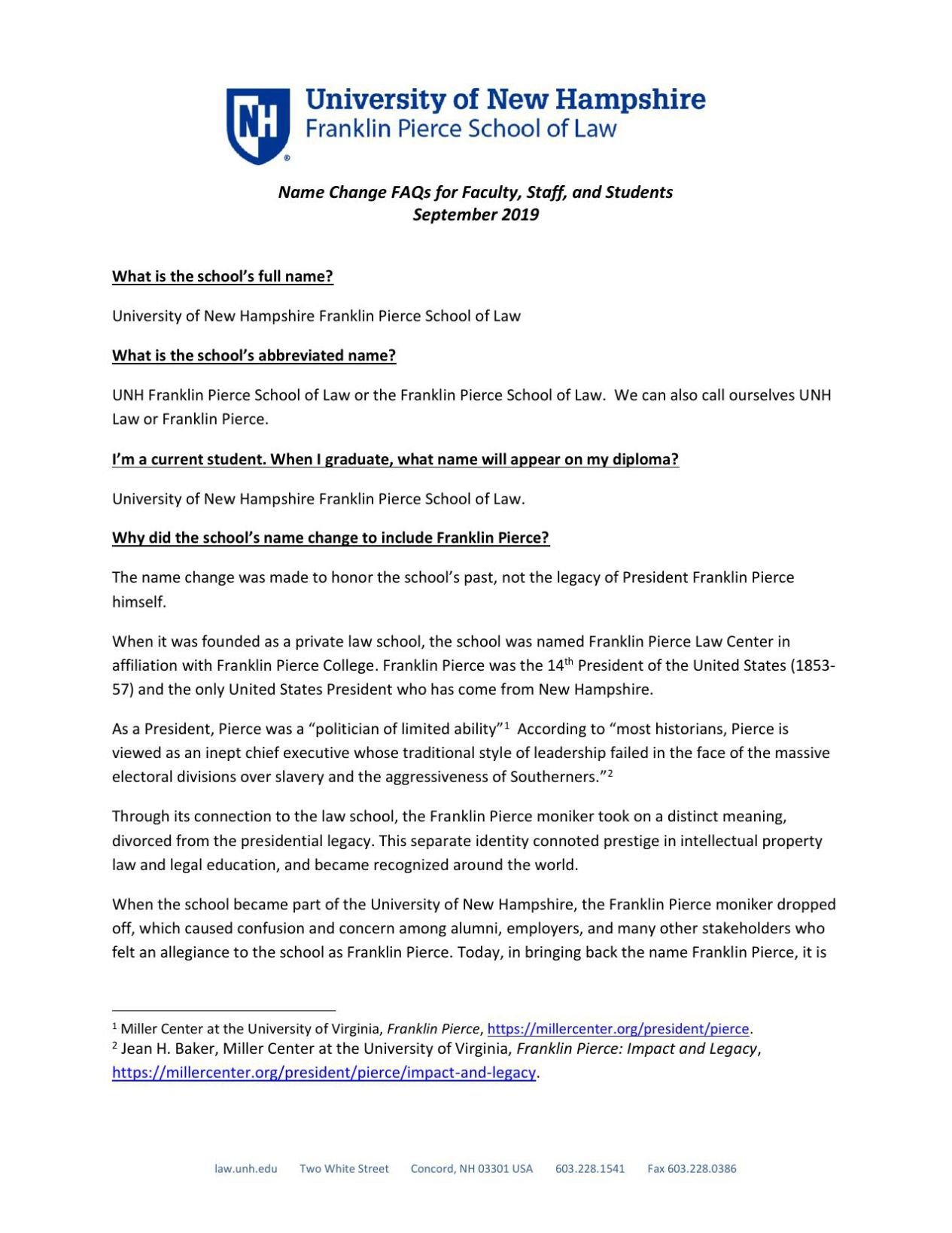 The state’s only law school was founded in 1973 in Concord as the Franklin Pierce Law Center. When it became part of UNH in 2014, the university dropped the Pierce name. But the loss of Pierce’s name created confusion among alumni, employers and stakeholders who felt allegiance to the school, the document reads.

The school announced the rebranding of UNH Franklin Pierce School of Law in May 2019 at a reception in Boston for 200 alumni.

Kevin Tracey, a veteran marketing professional, said he doesn’t think the school can divorce itself from Pierce’s legacy as the country rethinks issues of systemic racism. While some issues go away quickly, this one won’t, he said.

He said companies change their names all the time. To successfully rebrand the law school, UNH would have to launch a marketing campaign with a slogan to connect itself to intellectual property law, which is the school’s forte, he said.

It’s not clear if an outside marketing organization was consulted when it came to the name change last year. An email sent to college spokesperson Erika Mantz was not acknowledged.

The dean of the law school, Megan Carpenter, has said the school will make a decision about Pierce by Aug. 1.

UNH’s thoughts on Pierce are contained among a list of Frequently Asked Questions on the UNH website.

Access to those questions and answers was restricted to students, faculty and staff. The university provided them to the Union Leader after the newspaper filed a Right-to-Know request for the document.

It includes the statement: “According to most historians, Pierce is viewed as an inept chief executive whose traditional style of leadership failed in the face of the massive electoral divisions over slavery and the aggressiveness of Southerners.”

New Hampshire’s only online school is reporting quadruple the enrollment it had last year.

A graduate student at Dartmouth College has ended her nearly month-long hunger strike after school officials announced Friday an external investigator will look into allegations of sexual harassment she brought forward earlier this year.

School leaders around New Hampshire struggling with how to be in school next month are balancing the same state guidelines and feeling the same push-and-pull of parent concerns — and landing in completely different places.

Nashua Community College and Rivier University will reopen their campuses this fall with extensive changes and precautions in place.