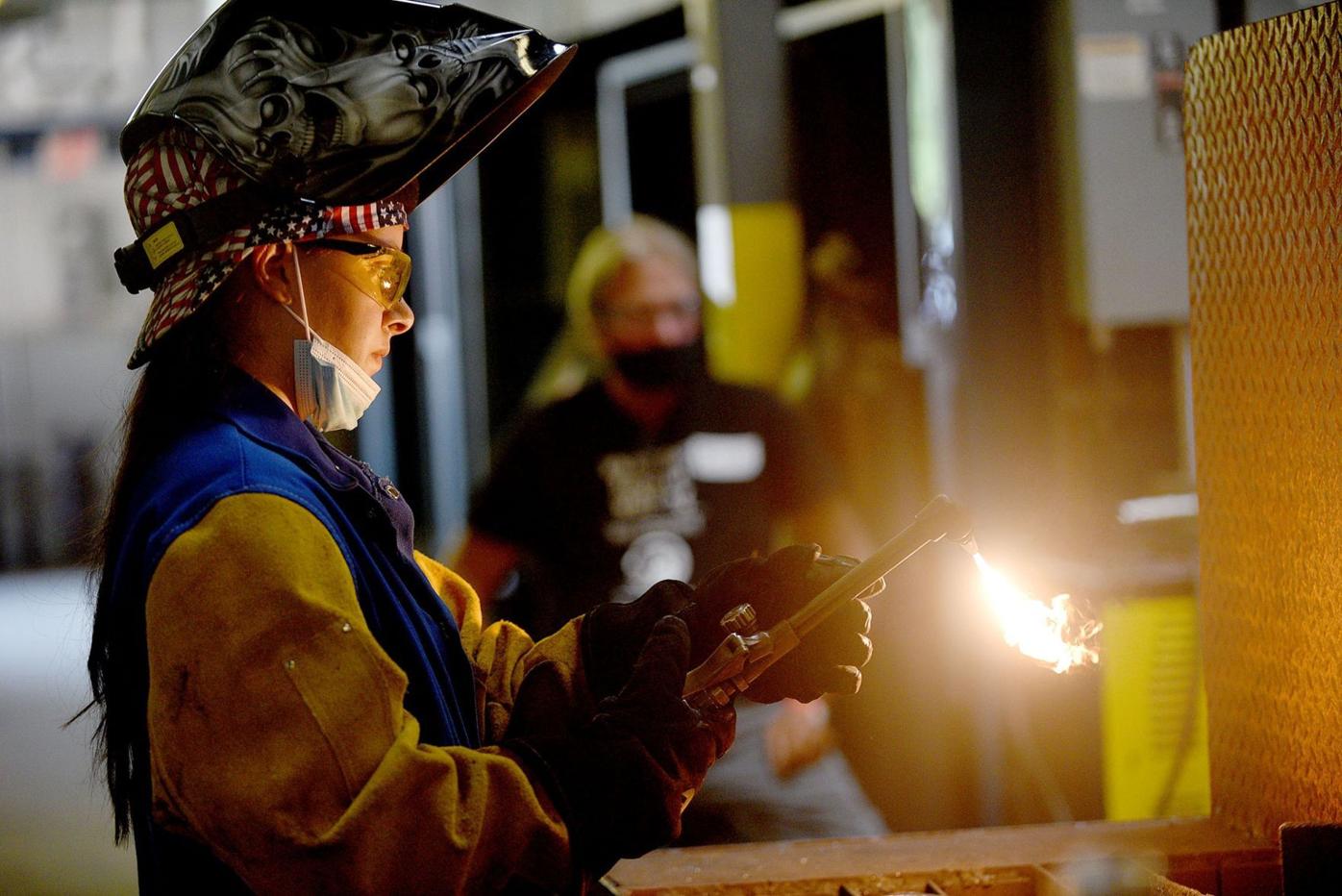 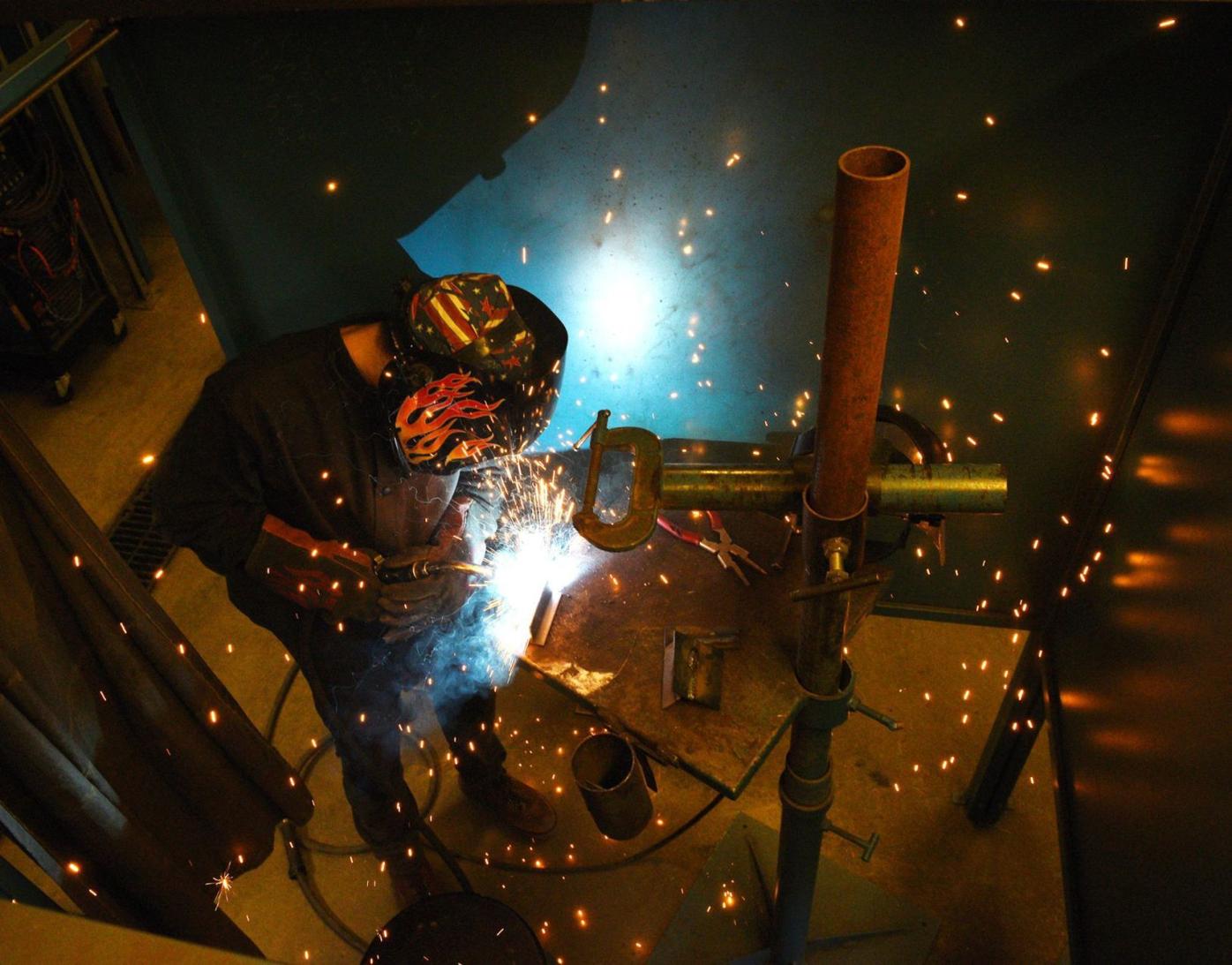 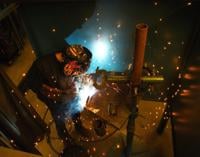 Sparks fly as John Shortill, a student at Portsmouth High, competes during the New Hampshire State Welding Skills Contest at Manchester Community College on May 21. 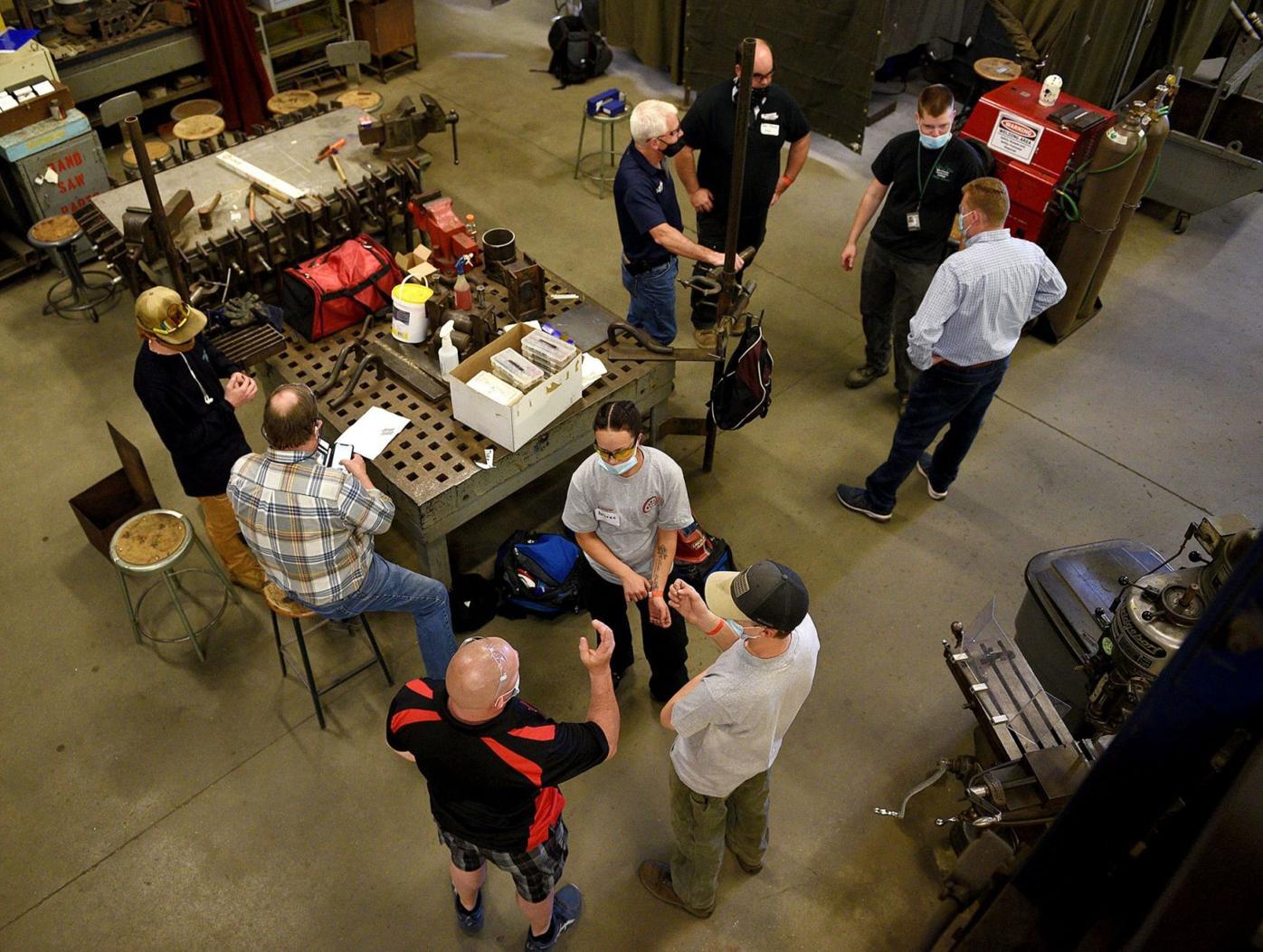 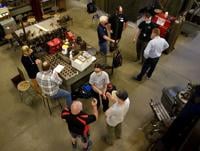 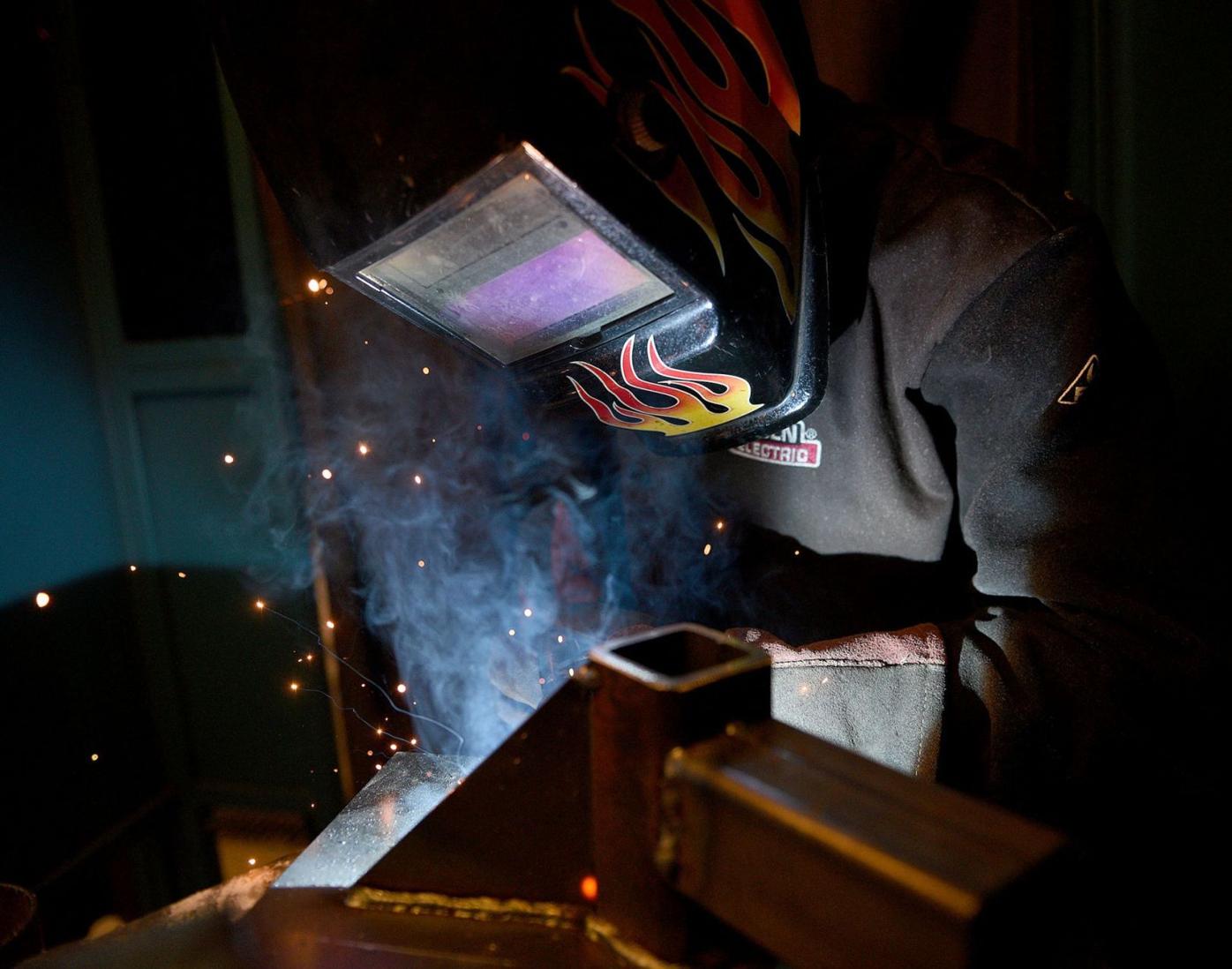 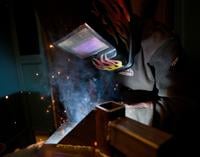 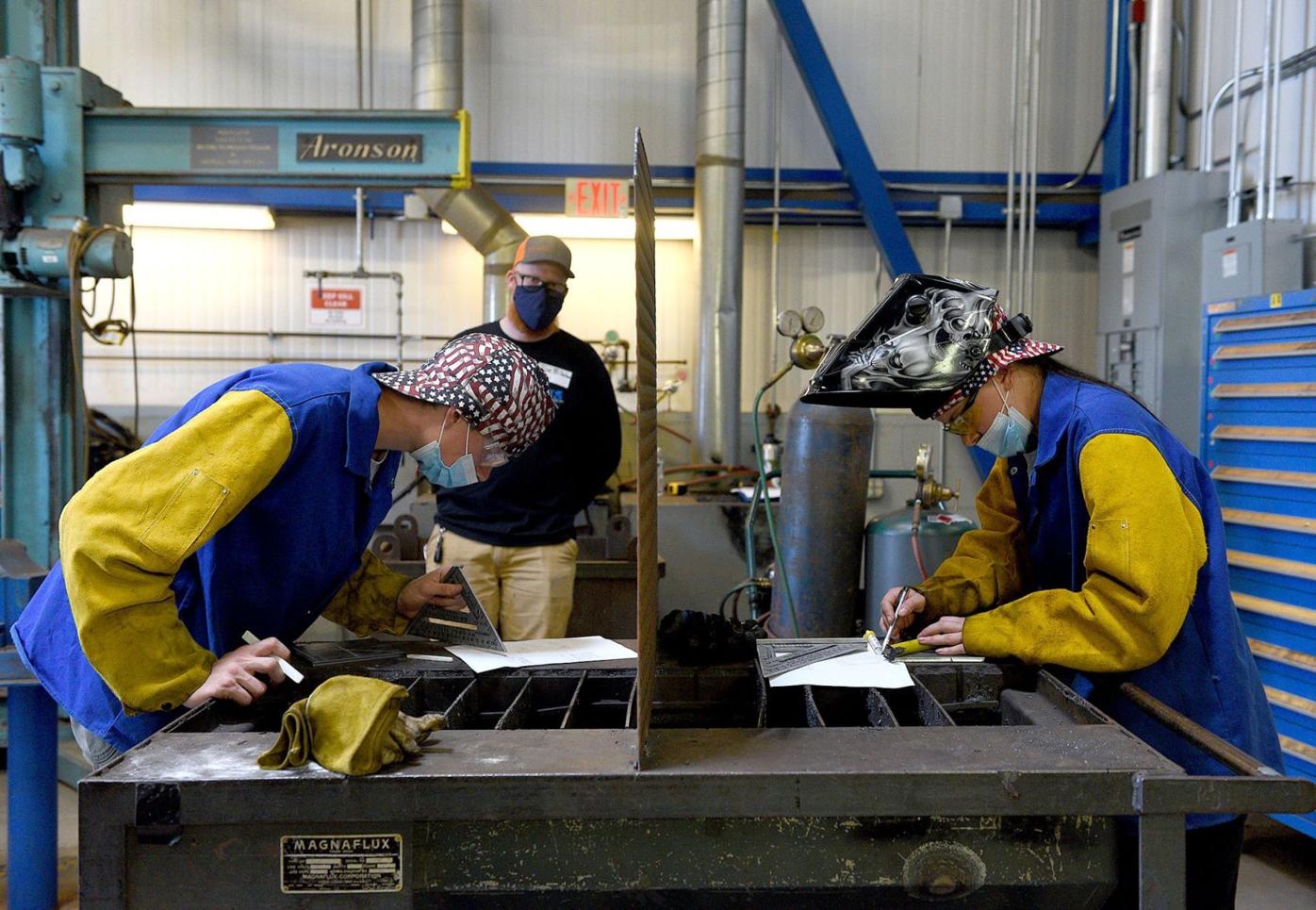 Wyatt DeBlois, left, and Aubree Poirier,  students at Berlin High School, measure steel for their tests during the New Hampshire State Welding Skills Contest at Manchester Community College on May 21.

Sparks fly as John Shortill, a student at Portsmouth High, competes during the New Hampshire State Welding Skills Contest at Manchester Community College on May 21.

Wyatt DeBlois, left, and Aubree Poirier,  students at Berlin High School, measure steel for their tests during the New Hampshire State Welding Skills Contest at Manchester Community College on May 21.

With national competitions for vocational high schoolers still on hold, a group of New Hampshire metal fabricators teamed up with welding programs at community colleges and high schools to hold a welding contest of their own.

Hollie Noveletsky, CEO of Novel Iron Works in Greenland, spearheaded the contest, bringing together the colleges, companies and technical high schools. But Noveletsky wants to grow the contest, and hopes it will help draw more students into the trade.

Noveletsky’s company teamed up with two other fabricators – SL Chasse Steel of Hudson and Capone Steel, a Massachusetts company with a presence in Berlin. The companies connected with welding programs at Manchester Community College, White Mountains Community College and Great Bay Community College.

Together, the colleges and the companies invited the state’s career and technical education high schools to send their top welding students to compete for a scholarship. Any student who had completed two welding courses was invited to compete in three regional contests, and the winners of those contests competed at Manchester Community College on Friday.

“It was a fun competition,” said Addison Kady, 17, of Portsmouth, a high school senior who hopes to land a welding job after he graduates in a few weeks. He said he liked getting the chance to test his skills outside the classroom.

“It tested our abilities on stuff we would do day-to-day around the job,” Kady said, like reading blueprints and performing different welding processes with different materials.

Dan Michel, 17, of Portsmouth said he liked being able to work with different machines. It felt like good practice for a job, he said.

“In the real world, nothing’s going to be perfect,” Michel said.

Meeting other students and adults who shared their interest in welding was the best part of the competition, said John Shortill, 18, of Portsmouth,

“It’s good to meet other high schoolers with similar goals,” he said.

Next year, said Noveletsky and Heather Wells, an associate professor of welding at White Mountains Community College, they hope to draw more students to the contest.

Wells said she thought the contest was a good opportunity for students not just to show off their skills, but meet people working in the metal fabrication field who have followed different paths.

Bringing together the colleges and different companies is a good way to show students the range of opportunities in welding — and strip away some of the stigma some high school students feel about choosing to go into the trades.

“There are pathways in welding,” Wells said, and plenty of opportunities for career advancement. “It’s not just welding, and it stops there.”

Austin Beutner has been an investment banker, first deputy mayor of Los Angeles, and publisher and chief executive of the Los Angeles Times. But none of those jobs were tougher than the position he is soon leaving after the grueling covid-19 year: superintendent of the Los Angeles Unified Sc…

Franklin Pierce University President Kim Mooney said this week that the school is going to require COVID-19 vaccinations for all students in the fall.