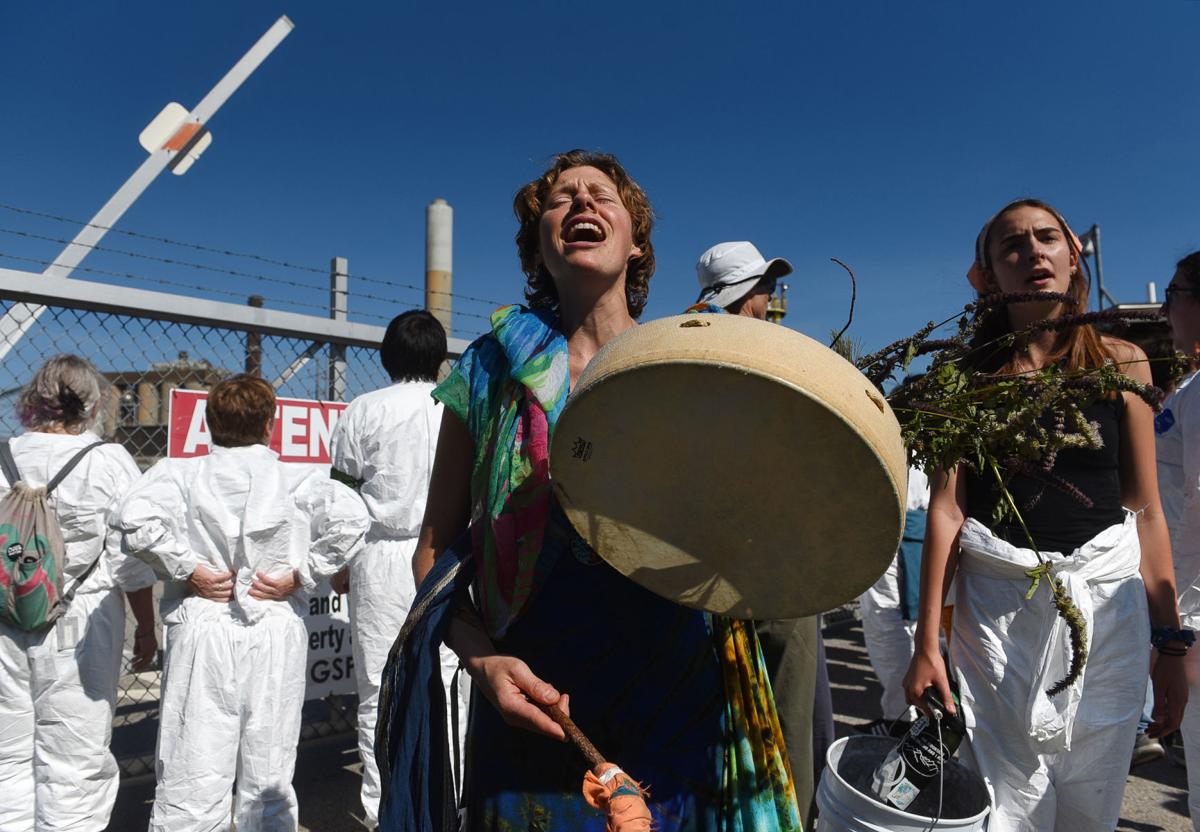 Mikaela Marvion of Putney, Vt., sings at the main gate of the Merrimack Station coal-fired plant in Bow during a protest Saturday. 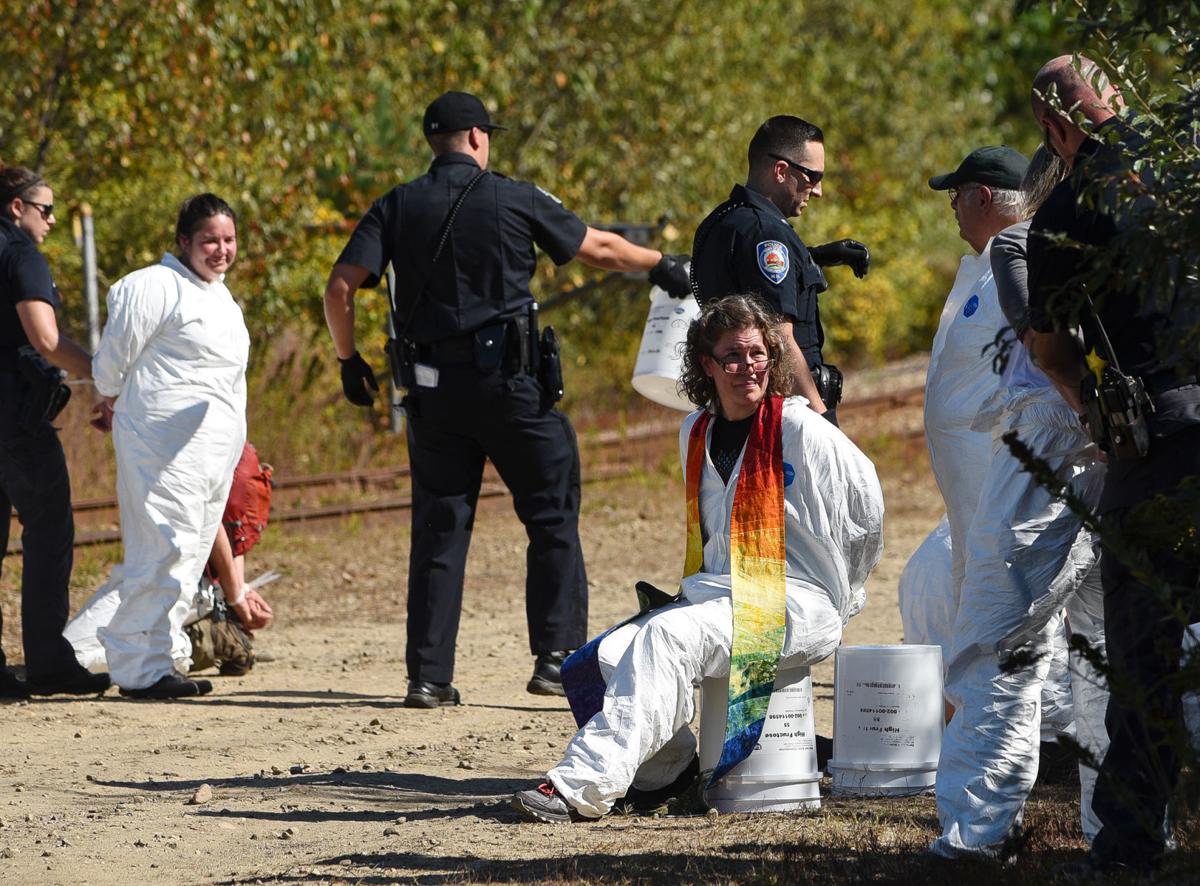 Emma Schoenberg of the Climate Disobedience Center, left, and the Rev. Kendra Ford from the First Unitarian Universalist Society of Exeter, are arrested Saturday on the grounds of the Merrimack Station power plant. 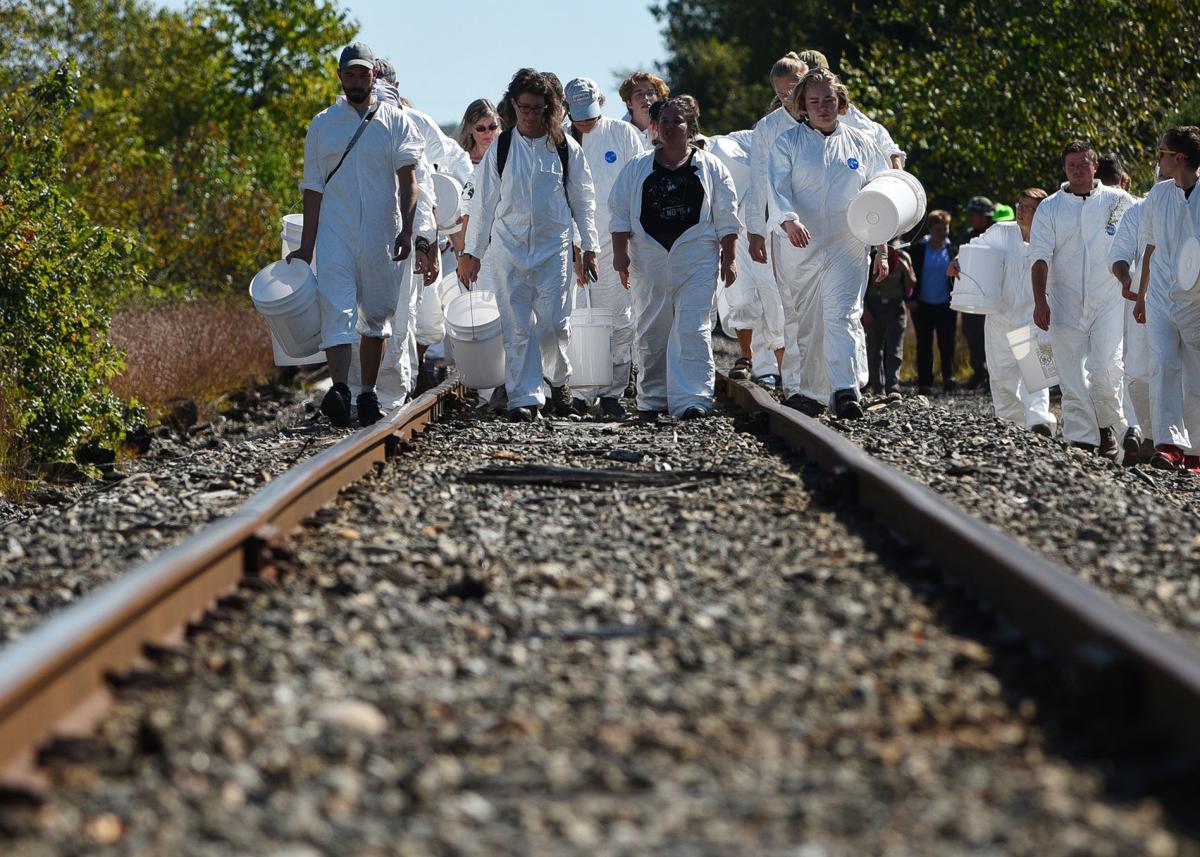 Protesters, dressed in hazmat suits, walk on railroad tracks toward the Merrimack Station coal-fired plant during a protest Saturday. 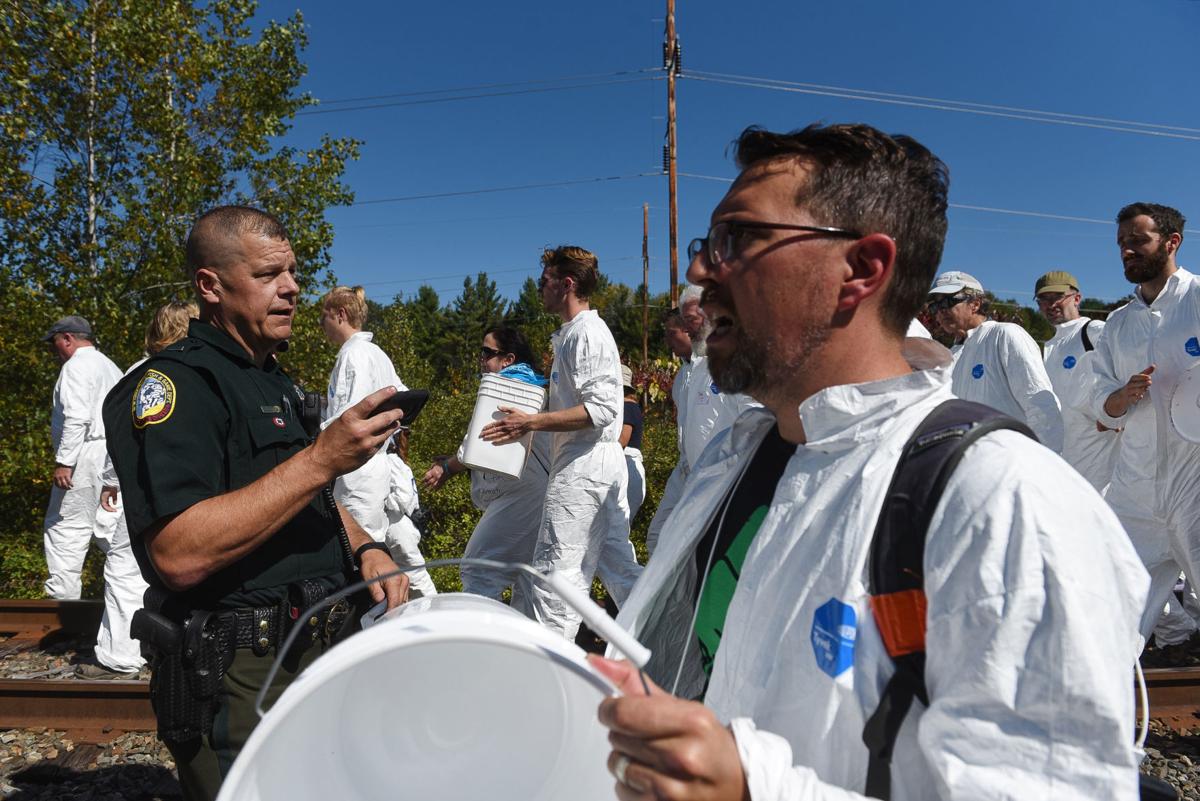 A Fish and Game officer tries to warn protesters, who are dressed in dressed in hazmat suits, of the risk of arrest as they continue walking on railroad tracks toward Merrimack Station during protests against the in Bow coal-fired plant on Saturday. 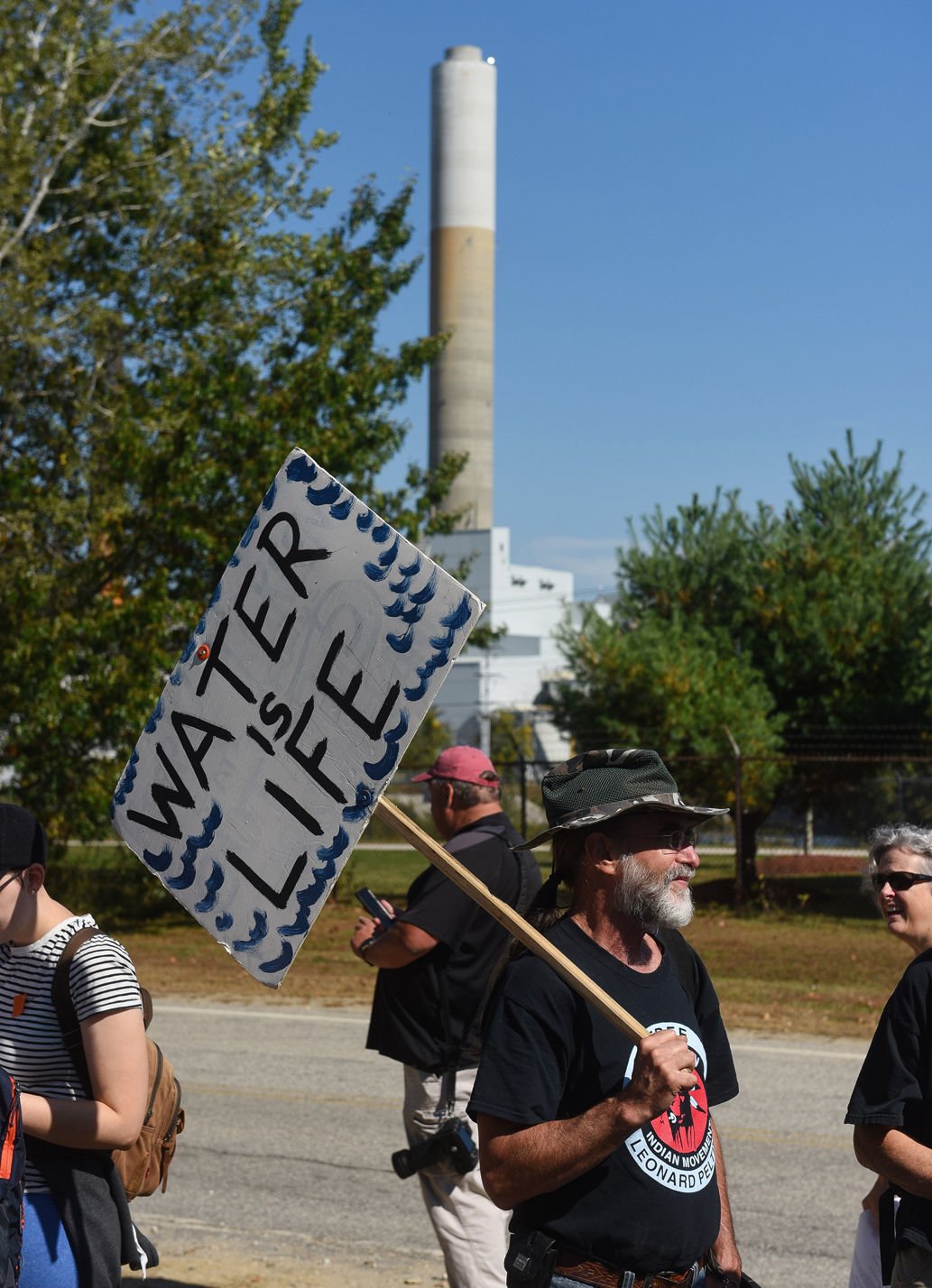 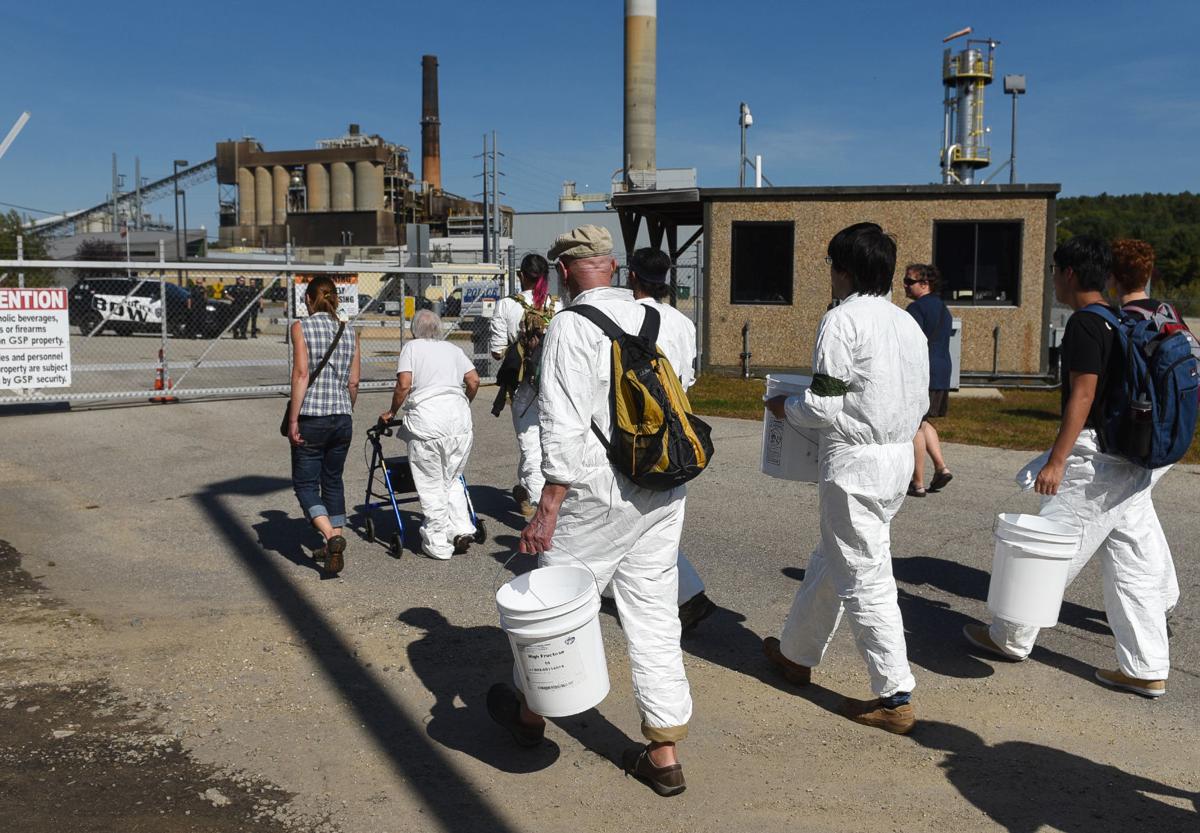 Protestors walk to the main gate of the coal-fired Merrimack Station during protests in Bow on Saturday. 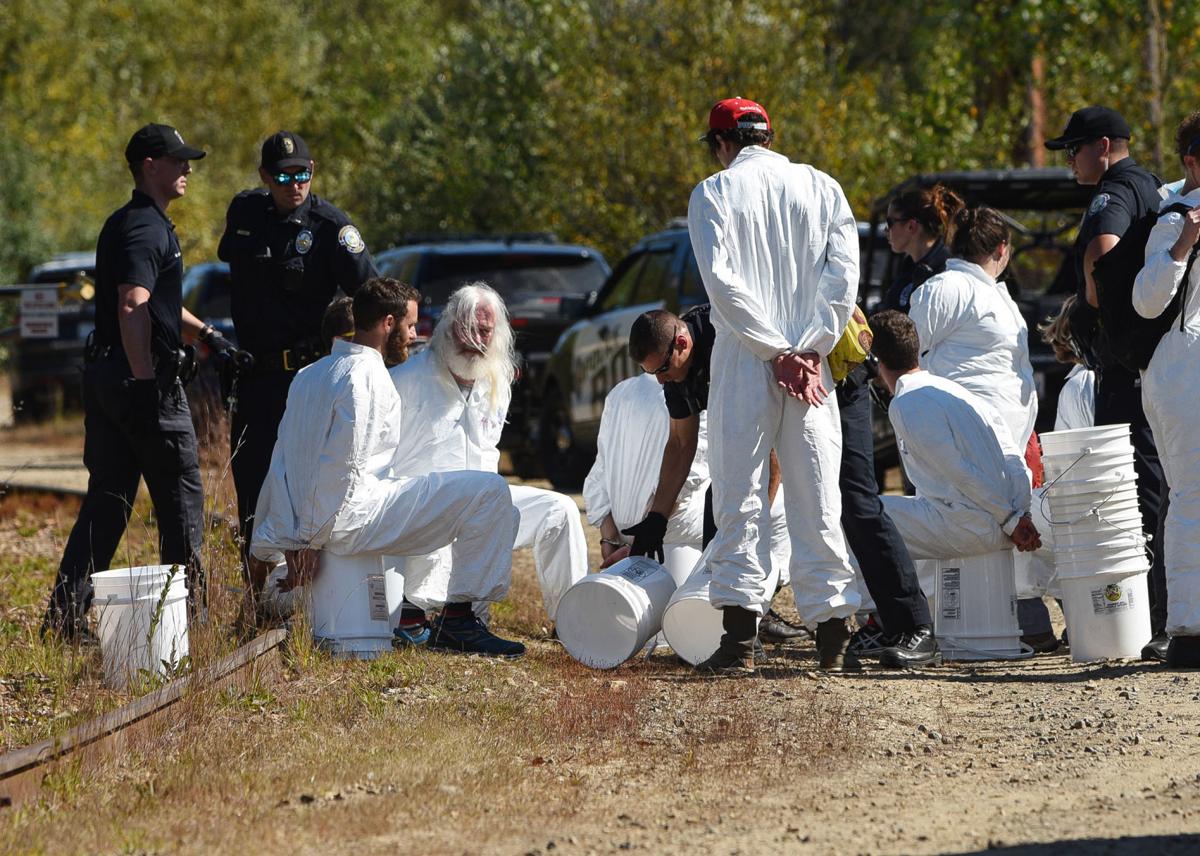 Protesters are in handcuffs Saturday. More than 60 people were arrested Saturday.during protests at Merrimack Station in Bow. 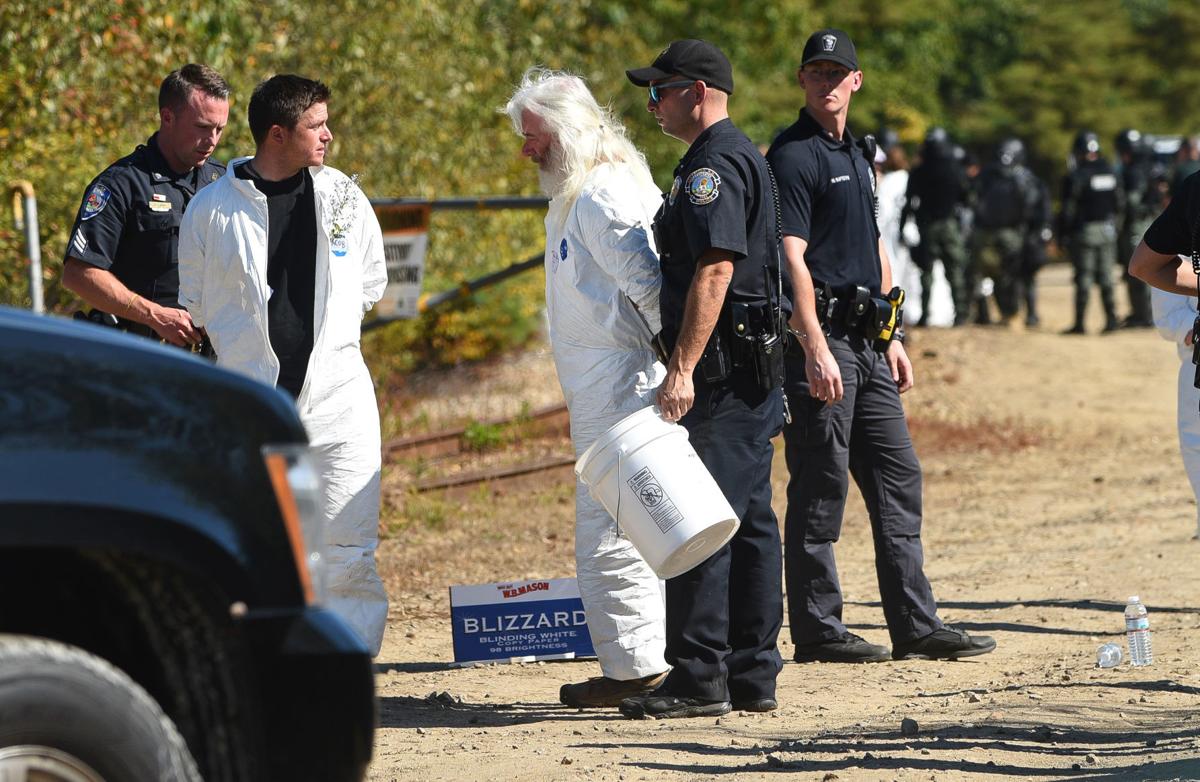 Police make arrests during the protest at Merrimack Station in Bow on Saturday. 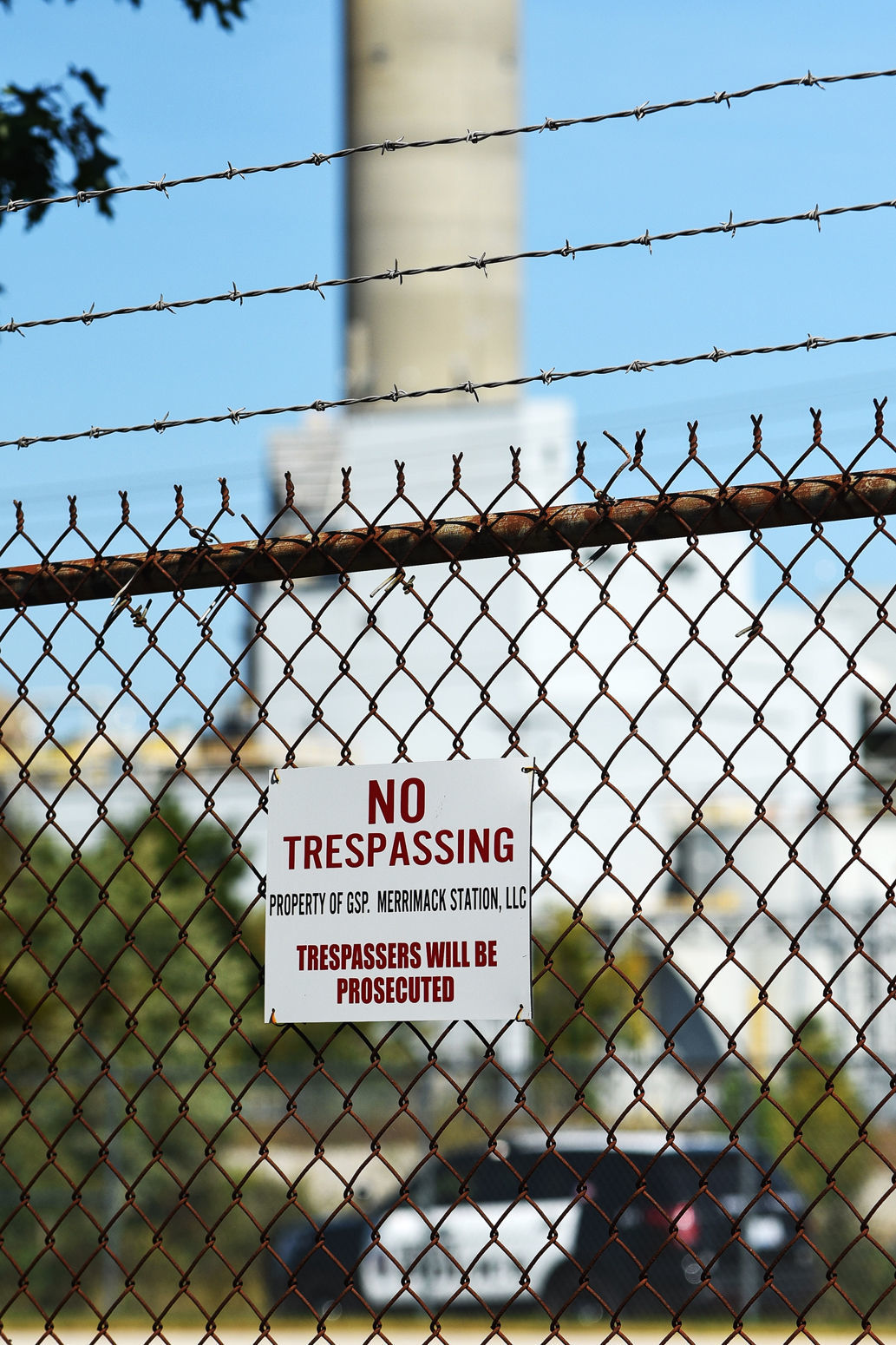 Signs at Merrimack Station warn visitors that trespassers will be prosecuted. 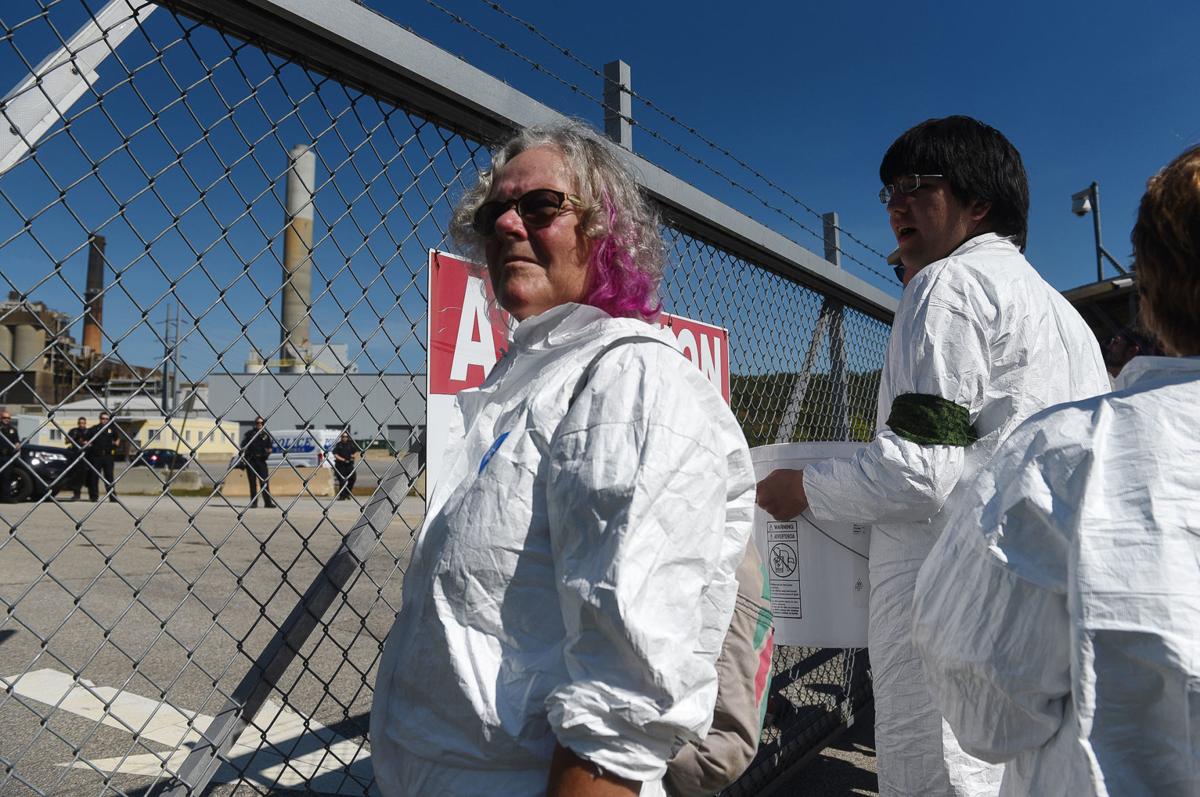 Protesters gather at the main gate of the coal-fired plant on Saturday.

Mikaela Marvion of Putney, Vt., sings at the main gate of the Merrimack Station coal-fired plant in Bow during a protest Saturday.

Protestors walk to the main gate of the coal-fired Merrimack Station during protests in Bow on Saturday.

Protesters are in handcuffs Saturday. More than 60 people were arrested Saturday.during protests at Merrimack Station in Bow.

BOW — Sixty-seven activists were arrested Saturday for trespassing at the Merrimack Station coal-burning power plant, in what organizers said was the largest environmental civil disobedience action since the Clamshell Alliance demonstrations against the Seabrook nuclear plant in the 1970s.

The group had been planning the action for weeks, and the arrests were not unexpected.

They chose the Bow plant on the Merrimack River because it has two coal-fired steam units, along with two kerosene-powered turbine units. The coal-fired units “serve as seasonal and peak demand resources,” according to the website for Granite Shore Power, which purchased the plant from Eversource in early 2018 as part of the state’s deregulation of the electric market.

Those arrested were part of a group of about 300 people from across New England who attended a “No Coal, No Gas” rally held in the ballfield across from the plant. For three hours, folks of all ages sang, chanted and cheered as speakers called for action on climate change — starting with shutting down the nearby power plant.

Lilly Tague-Bleau, 15, a sophomore at Manchester Central High School, told the crowd that climate change demands an immediate response. “As sea levels rise and events of extreme weather continue to occur at alarming rates, we are left with no choice but to take action and step in now,” she said. “We must work before this movement becomes nothing but damage control.”

“It seems like our leaders only care about the short term, but ‘I’ll be dead when it matters’ does not apply to me and my children,” she said, as the crowd erupted in cheers.

About halfway through the rally, those who had decided in advance they would “risk arrest” headed out, dressed in Tyvek suits.

One group marched to the plant’s front gate on River Road, stopping at a chain-link fence to sing and chant. A larger group kept walking, turning into an industrial park and moving onto the railroad tracks leading to the back entrance to the plant.

They sang as they walked — “You Do Not Walk Alone” and “What Must Be Done” — while keeping the beat on white plastic buckets.

Emma Schoenberg from the Climate Disobedience Center, one of the organizers of the event, led a call-and-response from the group as they walked: “This is a global issue. As we walk, sing your songs, chant your chants, and allow yourself to grieve. And as you walk, allow yourself to feel hope.”

Then with an impish grin, she said, “Before we go … let’s wave at that chopper up there.” And the group all turned, waving and smiling at the state police helicopter that had been circling overhead all day. Then they moved onward toward the plant.

The owners of Granite Shore Power issued a statement about Saturday’s arrests: “We respect and support the right of any person to express his or her views. Unfortunately, today’s protest and trespassing was more about making a scene and breaking the law than about conveying an informed point of view.”

When the protesters reached the access road to the plant, a line of local and state police officers were waiting for them. They held one last group meeting. “We have a very quick decision to make,” Schoenberg said. “Do you want to cross the barrier?”

The group signified their resolve with thumbs up. But one young woman, her hair in braids, called for the protesters to refrain from chanting and drumming as they approached the police.

“The reason I am here is for love of people and planet, and that is what moves us forward,” she said. “What’s going to give me the courage to cross that border is love, not anger.”

The protesters helped each other over the concrete barriers and moved forward until they were stopped by the waiting officers. There were no scuffles, and the protesters stood or sat as they were taken into custody; some continued to sing quietly.

Organizers said those arrested were released on personal recognizance. Bow police said no injuries or property damage were reported.

Earlier in the day, police also arrested Jay O’Hara of Portland, Maine, on a warrant for illegal dumping, in connection with an August incident in which he and other activists dumped coal taken from the Bow power plant in front of the State House.

Saturday’s rally and civil disobedience event drew participants from across New England. Around 130 people stayed in Concord Friday evening at the Unitarian Universalist Church, where they made plans for the civil disobedience action and shared a potluck meal before sleeping on the floor.

Espahbad Dodd of Portland, Maine, said he has never done civil disobedience before, but said at 76, “I feel like it’s time to put myself on the line.”

Dodd said he’s been impressed with the young people who are speaking out about climate change, and wants to support them. “I’m not going to be around, but they’re going to be around, and their kids,” he said. “When you think of the state the planet’s going to be in, it’s sorrowful; it’s a shame. It saddens me to think of what we’re losing.”

Brynne Martin, 34, of South Burlington, Vt., echoed his urgency. “We have to start taking steps toward making our planet liveable and safe for future generations,” she said.

Martin, a pre-school teacher, said she planned to risk arrest. “I have told my director there’s a chance I might not make it in on Monday,” she said.

Mary Beth Raven, 58, of Merrimack, said she has asthma. “And there’s no reason why the fossil fuel industry needs to keep polluting the air and making it harder for me to breathe when there are other alternatives,” she said.

In its statement, Granite Shore Power said Merrimack Station operates 80 percent less than it did in 2006, and has decreased carbon emissions by 85 percent. It said the plant “is essential in providing a secure pathway for alternative energy development, and any claim that Merrimack isn’t needed would be misinformed.”

“On the coldest days and hottest nights, when the availability of gas is severely constrained, our team provides necessary heat and power for our homes and small businesses, keeping people safe and preventing dramatically higher costs on New Hampshire residents,” it said.

Pat Martin, 69, a retired electrical engineer from Rindge, chairs her town’s energy commission. She said a coal-fired plant is not the best resource to use for peak power generation. “It takes a while to ramp it up,” she said. “And yet that’s how it’s used.”

New Hampshire, Martin said, is a “donor state” when it comes to power generation. “Everything gets sited in New Hampshire because we have a lot of land. How about siting some renewables instead, so it’s useful afterward; it doesn’t become a hazardous waste site.”

Karen Sargent of Westminster, Mass., 67, said it doesn’t matter that the Bow plant is only used seasonally. “They could still use other things, and we ought to be transitioning to other peak fuel systems rather than relying on coal or gas,” she said.

Sargent was planning to risk arrest Saturday. “Because it’s time to do more than just marches,” she said.

Stephanie Scherr, 53, of Fitzwilliam, is a middle/high school science teacher. “I’m here because I’m deeply concerned that our state legislators are still unwilling to say no to fossil fuel expansion,” she said. “It’s time for them to wake up. They have children too.

“We need to put people before politics, and planet before profits,” Scherr said.

Sue Durling of Hillsborough was thinking about her 11 grandchildren as she got ready for the demonstration. “Tears come to my eyes when I realize what life is going to be like for them when they’re my age,” she said. “We screwed it up. We have to do what we can to fix it.”

More than 60 commercial fishermen and their supporters testified Tuesday in favor of a bill that would block any attempt to develop offshore wind projects anywhere along the Maine coast.