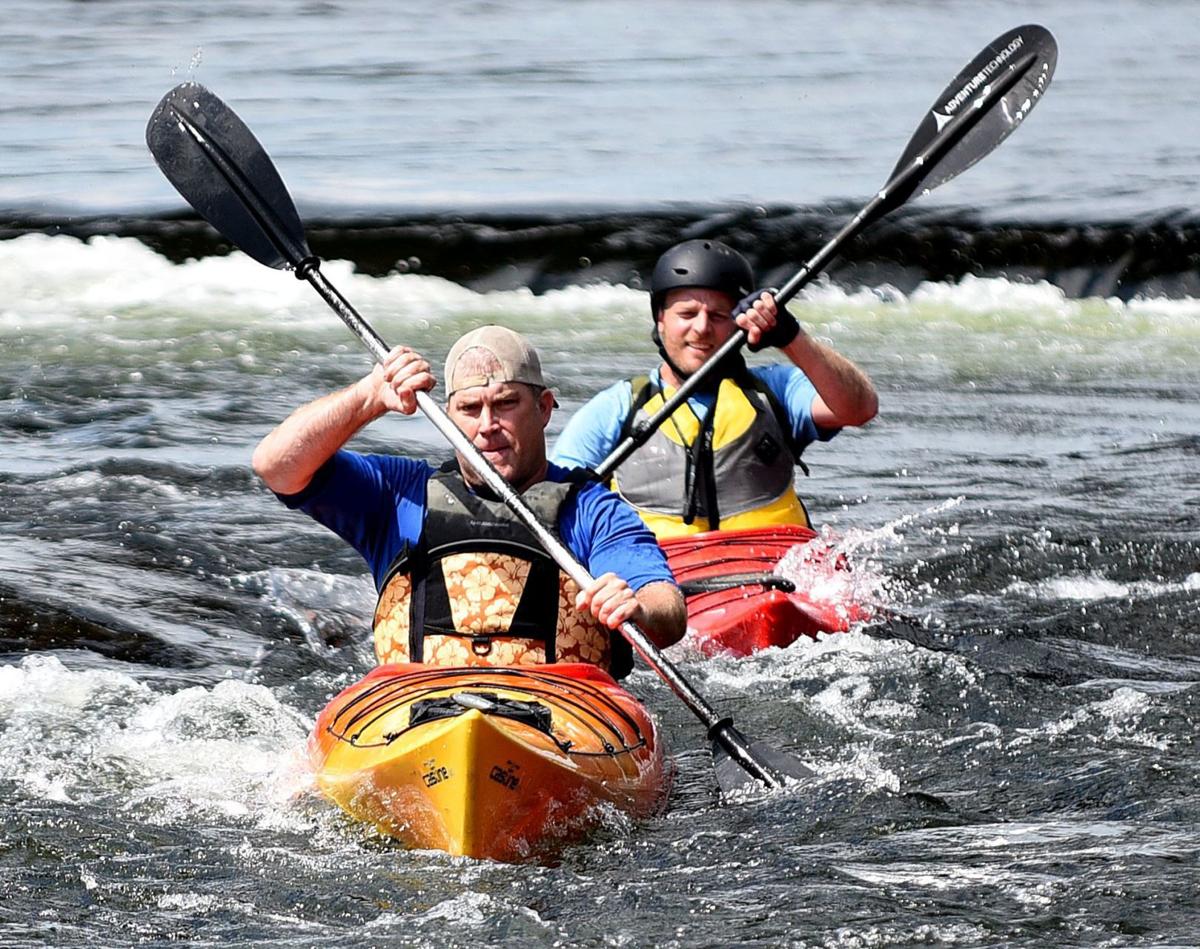 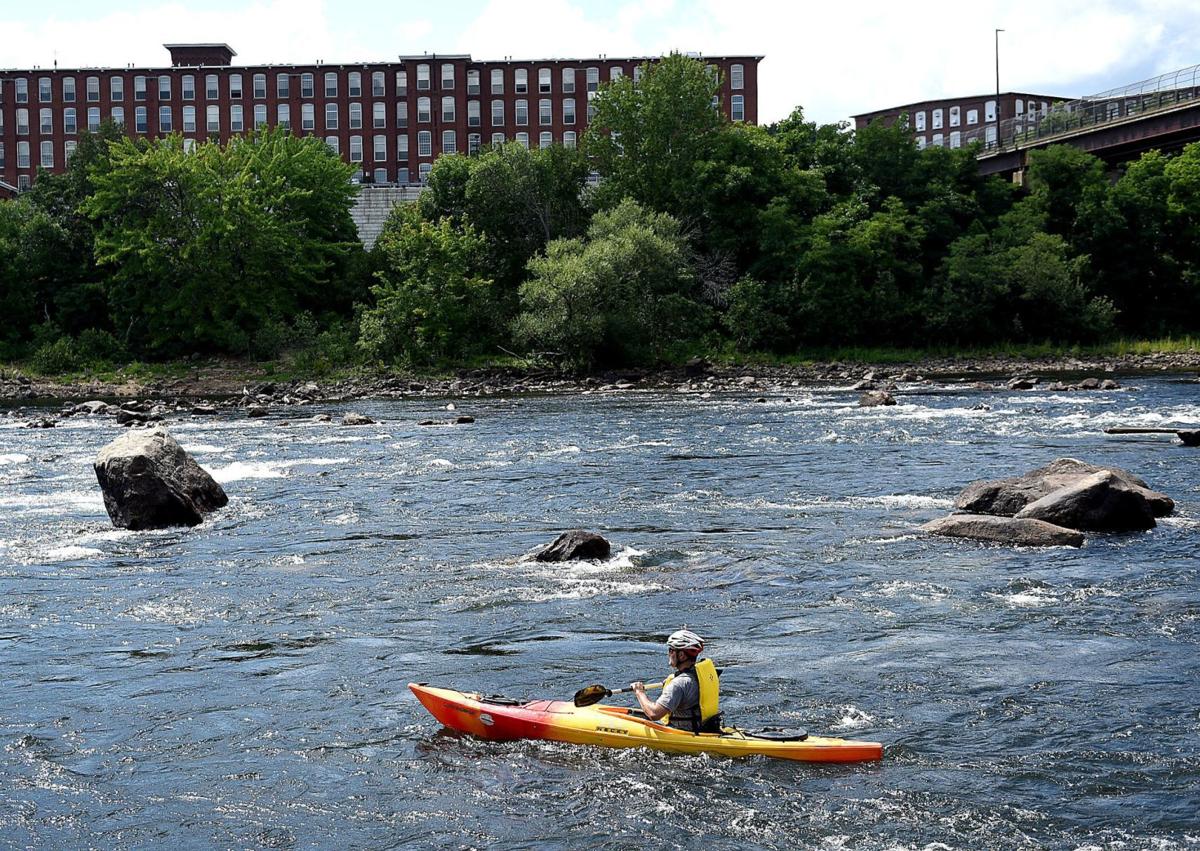 Dougan Sherwood, president of the Haverhill Chamber of Commerce, navigates the rapids at Arms Park in Manchester on Aug. 8, 2019. He was paddling the river from Franklin to Plum Islland with a group of community leaders from Massachusetts to highlight ther river’s importance. 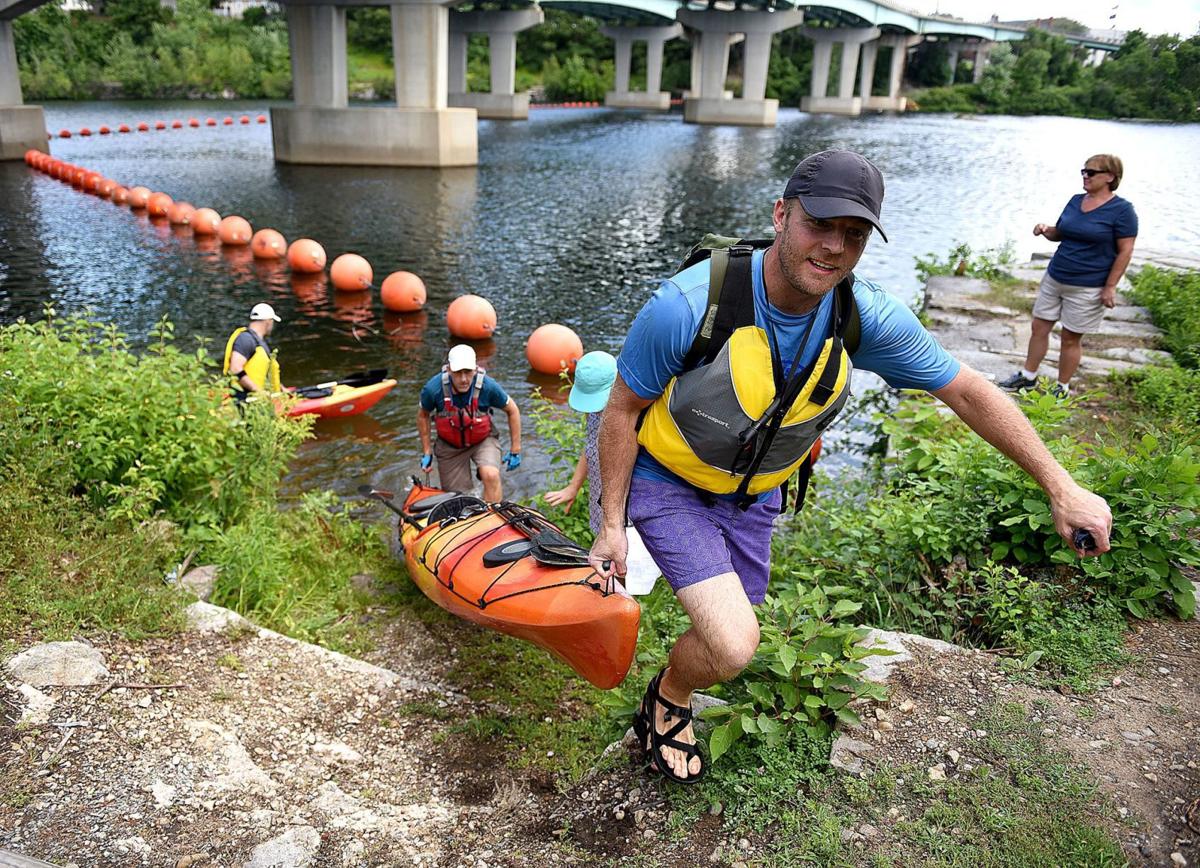 Derek Mitchell, executive director of the Lawrence Partnership, climbs up the banks of the Merrimack River just above the Amoskeag Dam on Thursday. He was paddling the river from Franklin to Plum Island with a group of community leaders from Massachusetts to highlight the river’s importance to the Bay State.

MANCHESTER — Massachusetts politicians, environmentalists and business leaders visited Manchester by kayak Thursday, part of a four-day trip to raise awareness of the Merrimack River, which flows through the two states.

Two Massachusetts state reps and a state senator were among the 10 people who are kayaking the historic 117-mile-long river.

While the Merrimack has grown cleaner over the years, trip organizers faulted the city of Manchester for not announcing releases of raw sewage when they occur, usually after a flash rain storm.

“It all flows down the river, and we’re at the end of it,” said Rep. James Kelcourse, who represents Newburyport, Salisbury and Amesbury. Four other cities with waste water treatment systems along the river post or email notices when overflows take place.

“That’s all people want — just let us know, so I don’t let my dog go in the water two hours after a release,” said Dan Graovac, president of the Merrimack Valley Watershed Council. The council organized the trip.

On hand to eat lunch with the group was Fred McNeill, who runs the Manchester Environmental Protection Division.

He said “some type of notification” system should be up on the Manchester city website by the end of this month. But he said it won’t be a real-time notification system because not all of the city’s outfalls have meters to detect overflows.

McNeill said the city is in negotiation with the state Department of Environmental Services and the U.S. Environmental Protection Agency about sewer overflows, and one of the topics deals with meters and overflow notification. A consent decree with the regulators should be reached by year’s end, he said.

McNeill said Manchester has eliminated overflows on the West Side, a 10-year project that cost $58 million. A $212 million project to eliminate half the overflows in the east side of the city is underway.

“Nothing makes me prouder than the fact that 500,000 people get their drinking water downriver from my plant,” McNeill said.

The Massachusetts entourage started their trip on Wednesday in Franklin, where the Merrimack begins at the confluence of the Pemigewassett and Winnipesaukee rivers. They saw at least a dozen bald eagles, herons and peregrine falcons. But they also saw a lot of junked tires and other litter, Graovac said.

They had planned to camp along the way, but spent Wednesday night at a Canterbury farm to avoid the heavy rains. They also had the opportunity to negotiate rapids from Class 1 to 3 in Manchester.

Other paddlers included a community college president, a chamber of commerce president and leaders of development groups in the Merrimack Valley. They said communities are finding recreational and economic opportunities along the river and its tributaries. In Lawrence, for example, the Spicket River Greenway includes 3 1/2 miles of walking paths and parks, said Heather McMann, executive director, Groundwork Lawrence.

“I think the future of economic development for Haverhill is inextricably tied to access of the river,” said Dougan Sherwood, president of the Haverhill Chamber of Commerce.

No Granite Staters were part of the trip. But representatives from the Southern New Hampshire Planning Commission, U.S. Sen. Maggie Hassan and U.S. Rep. Chris Pappas greeted the paddlers when they portaged the Amoskeag Dam.

Graovac said the trip developed informally, and his group did not find a lot of interest in New Hampshire.

“We haven’t had a lot of traction in New Hampshire,” he said, “but we’re changing that.”

NH homeowner: Check your air and water for radon

A Nottingham resident has a message for New Hampshire homeowners: Check your air and water radon levels.

As U.S. cities struggle to rein in garbage while propping up pricey recycling efforts, more companies are profiting from America's growing waste problem and leaving local communities to face the environmental consequences.