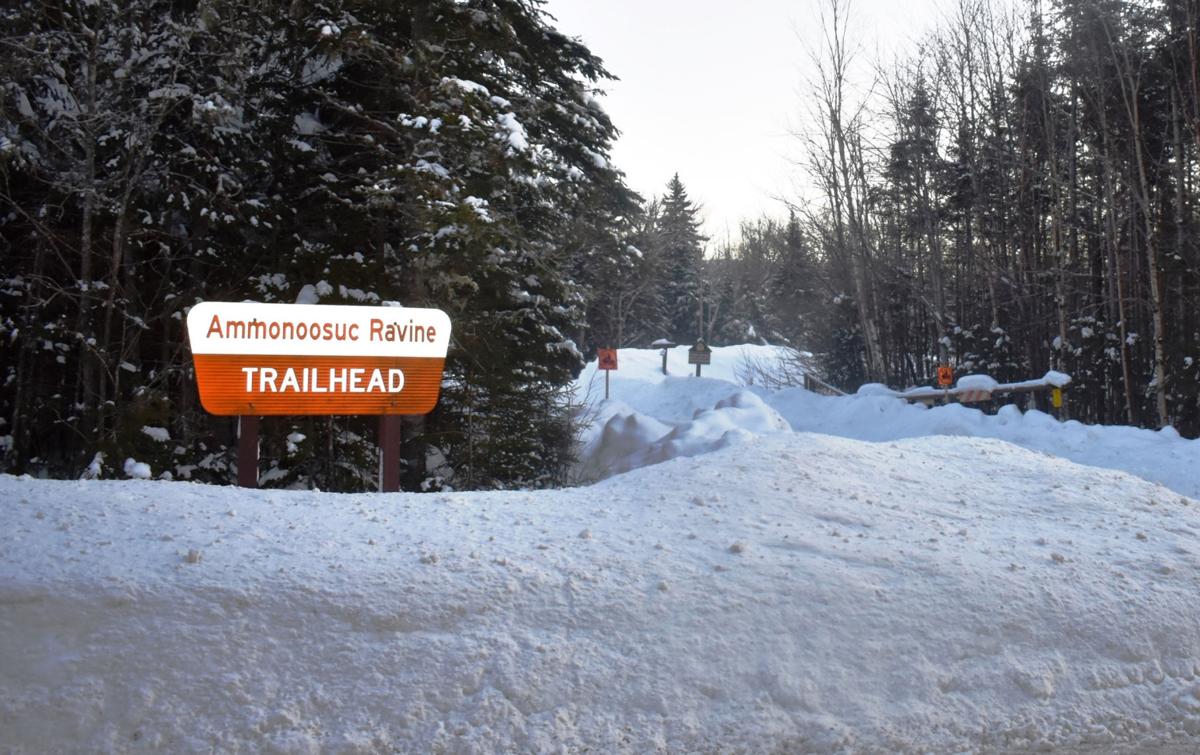 Located off Base Station Road, the Ammonoosuc Ravine Trailhead, shown on Feb. 12, is where Ian Forgays of Lincoln, Vt., parked his vehicle and began his ascent of the ravine, where he was killed in an avalanche on Feb. 1. 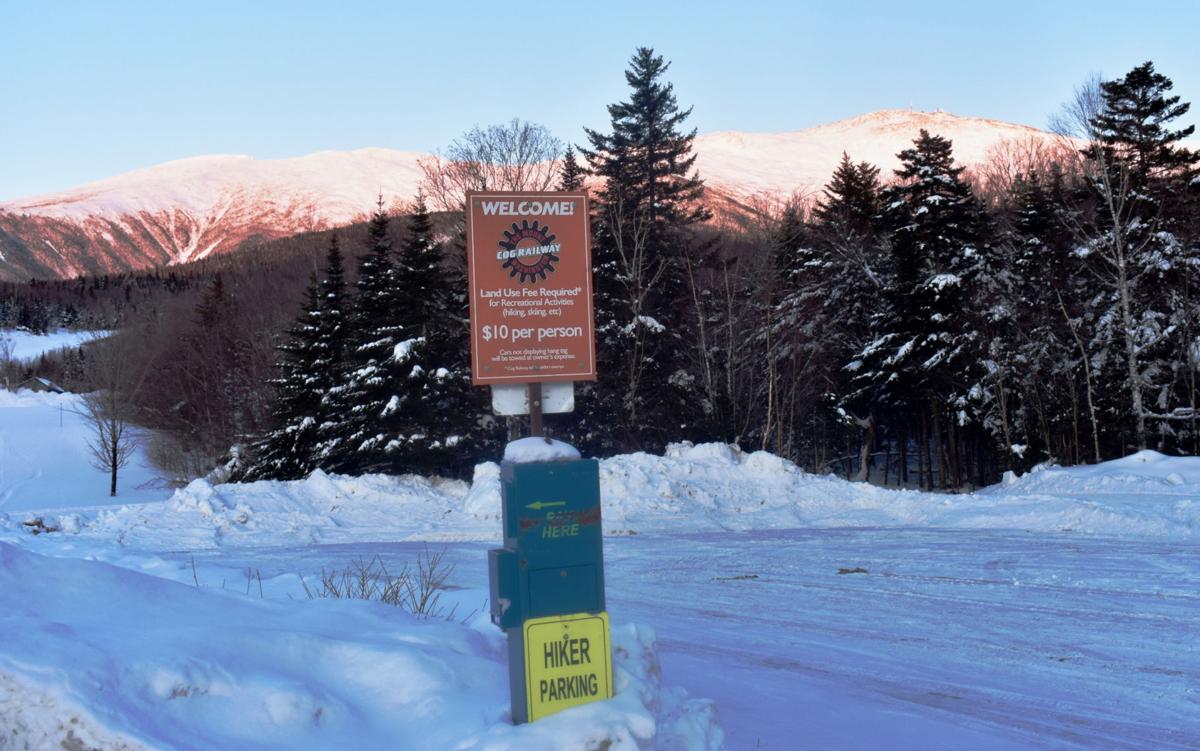 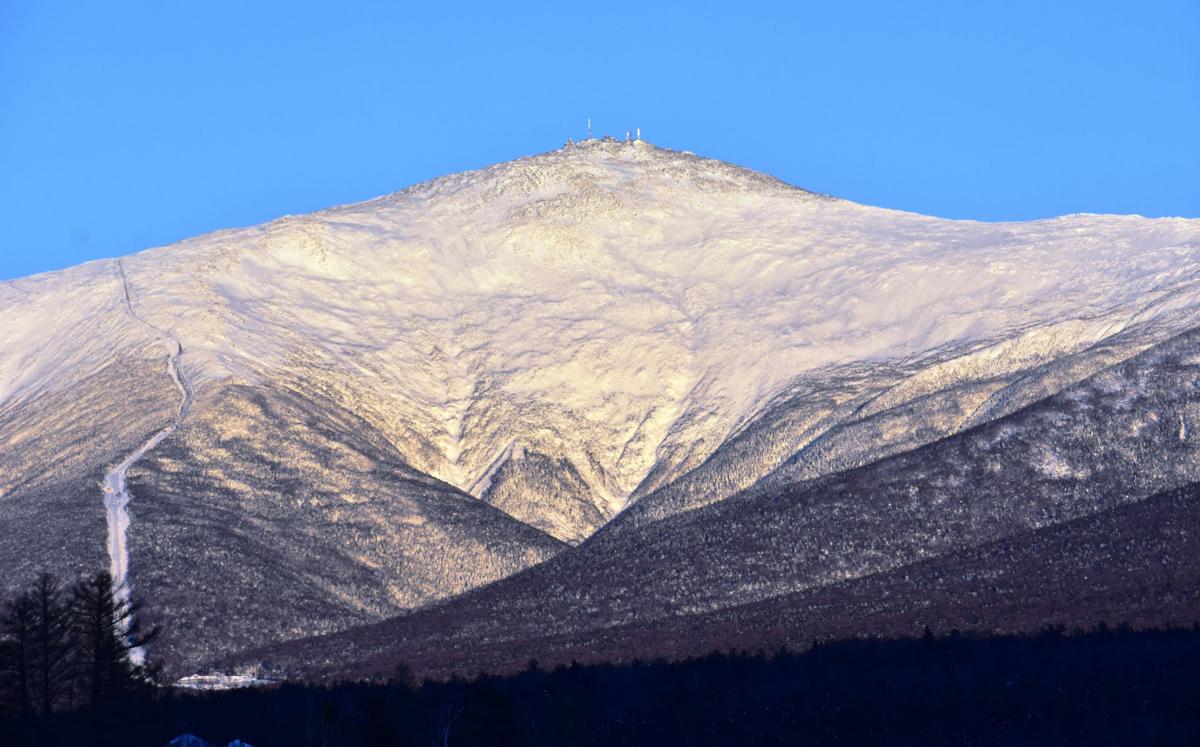 The setting sun on Feb. 12 illuminates the western side of Mount Washington. The tracks of the Cog Railway are visible at the left, the Mount Washington Observatory is at top in the center, and below it is the Ammonoosuc Ravine, where a Vermont man was killed Feb.1 in an avalanche.

Located off Base Station Road, the Ammonoosuc Ravine Trailhead, shown on Feb. 12, is where Ian Forgays of Lincoln, Vt., parked his vehicle and began his ascent of the ravine, where he was killed in an avalanche on Feb. 1.

The setting sun on Feb. 12 illuminates the western side of Mount Washington. The tracks of the Cog Railway are visible at the left, the Mount Washington Observatory is at top in the center, and below it is the Ammonoosuc Ravine, where a Vermont man was killed Feb.1 in an avalanche.

A Feb. 1 avalanche in the Ammonoosuc Ravine on Mount Washington that killed a backcountry skier, though rare, was a warning that sometimes being experienced and well-equipped isn’t enough, first responders said.

In a report last week, the Mount Washington Avalanche Center said Ian Forgays, 54, of Lincoln, Vt., triggered an avalanche in which he perished from asphyxia.

Forgays was one of 15 people killed in the U.S. by avalanches between Feb. 1 and Feb. 8, making that the deadliest seven-day period since the Forest Service’s National Avalanche Center started tracking deaths.

According to the Avalanche Center report, Forgays knew the challenges and acknowledged them in texts he sent the day before he died in which he said he intended “to move slowly and intentionally.”

“By all accounts, he was a very accomplished skier with many of the steepest lines in the Whites under his belt,” the report continued, before noting that Forgays found “a triggerable slab in mostly safe avalanche conditions.”

The circumstances were “rare but not unheard of,” the report said.

If Forgays had been with a skiing partner, it “may have saved his life,” the report said, but “given the terrible terrain trap below, maybe not.”

A terrain trap is a choke point on a slope where avalanche debris accumulates.

The report summed up that “If there are lessons to be learned from this accident, they aren’t new. Skiing technical lines, in a thin snowpack above a notorious terrain trap, with no partners, even on a low danger day, raises the stakes tremendously.”

Lt. Mark Ober, head of the New Hampshire Fish and Game Office in Lancaster, said in a telephone interview that the Feb. 1 avalanche in the Ammonoosuc Ravine was his first there in 15 years on the job.

He said he had been aware for a while of a group of “hardcore, experienced” backcountry skiers on the west side of the tallest mountain in the Northeast, who have gone unpublicized because they “generally don’t get themselves into trouble.”

Fish and Game located Forgays’ vehicle at the Ammonoosuc Ravine trailhead on Base Station Road, Ober said, not far from The Cog Railway.

“We went up thinking he (Forgays) might have been in an avalanche.”

Forgays was wearing an avalanche transceiver that was broadcasting a signal searchers were able to pick up on their own units.

Without the transceiver, “we would not have found him until the snow melted, probably in June,” Ober said.

In speaking with Forgays’ family and friends, Ober said he learned that Forgays knew the area where we was skiing on Feb. 1 “like the back of his hand.”

“This was his passion for years,” Ober said. Forgays worked hard the rest of the year so he could ski the backcountry in the winter, he said.

But a day after Forgays’ body was recovered from under 13 feet of snow, Ober said he was contacted by a U.S. Forest Service employee who encountered backcountry skiers planning to ski Ammonoosuc Ravine specifically because it had been the scene of a fatal avalanche.

“By going out there you’re putting a lot of other lives in danger,” said Ober, including conservation officers, snow rangers and the members of the area’s all-volunteer search-and-rescue organizations.

Dave Govatski of Jefferson said that though Tuckerman Ravine on the east side of Mount Washington is well known for spring skiing, the Ammonoosuc Ravine has quietly and gradually acquired that reputation in the winter.

A former 30-year employee of the Forest Service, Govatski also is a former Appalachian Mountain Club hutman and a “Red Liner” — someone who has hiked all of the trails in the AMC White Mountain Guide.

He and Jim Cyrs, who is a conservation officer, backcountry skier and possibly one of the few people in New Hampshire with a degree in snow science, agreed the western side of Mount Washington is growing in popularity.

The popularity is due in part to proximity, Cyrs said.

Drivers coming off Interstate 93 first encounter Mount Washington from the west. They can park for $10 at The Cog, he said, and go up the Ammonoosuc Ravine Trail, which places them in skiable terrain faster than driving through Crawford Notch and then up Route 16 to Pinkham Notch, from which they have to hike up to two hours to take a single run down Tuckerman Ravine.

“Everyone thinks of Tuckerman Ravine in terms of backcountry skiing,” Cyrs said in a telephone interview. “But there’s skiing all over the Whites, and danger can happen anywhere.”

He said backcountry skiing is growing in popularity because the equipment has become better, less expensive and more available.

Fred Carus, the lead snow ranger at the Mount Washington Avalanche Center, advised skiers to stay on slopes with a grade of 30% or less.

And whatever you’re doing in the mountains, “It’s safer with a partner,” Cyrs said.

“When you’ve learned enough (about avalanches), you should go out and learn some more.”

NH homeowner: Check your air and water for radon

A Nottingham resident has a message for New Hampshire homeowners: Check your air and water radon levels.

As U.S. cities struggle to rein in garbage while propping up pricey recycling efforts, more companies are profiting from America's growing waste problem and leaving local communities to face the environmental consequences.