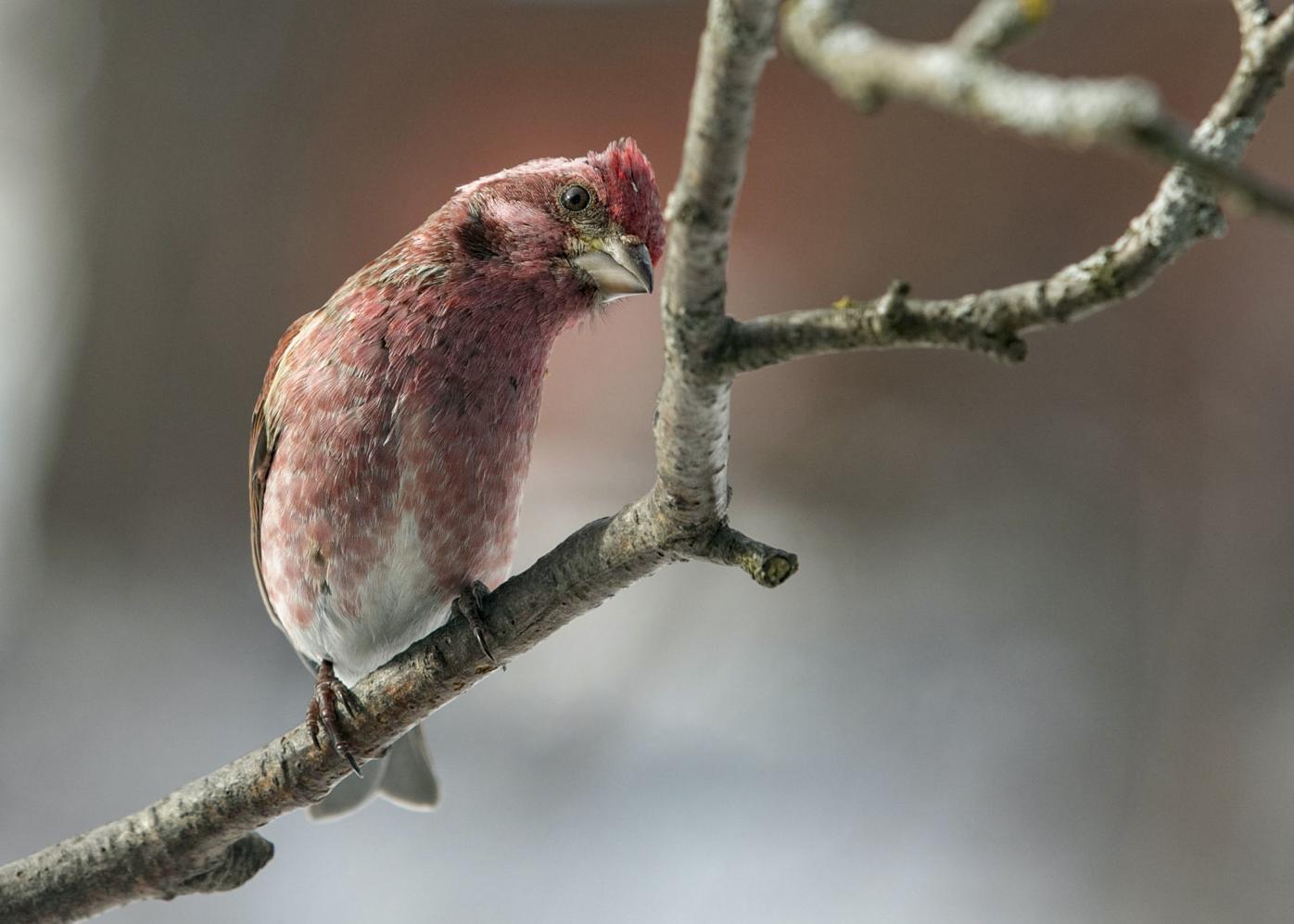 The purple finch, New Hampshire’s official state bird, will move north to escape the heat as the planet warms, according to a study released Oct. 10 by the National Audubon Society. 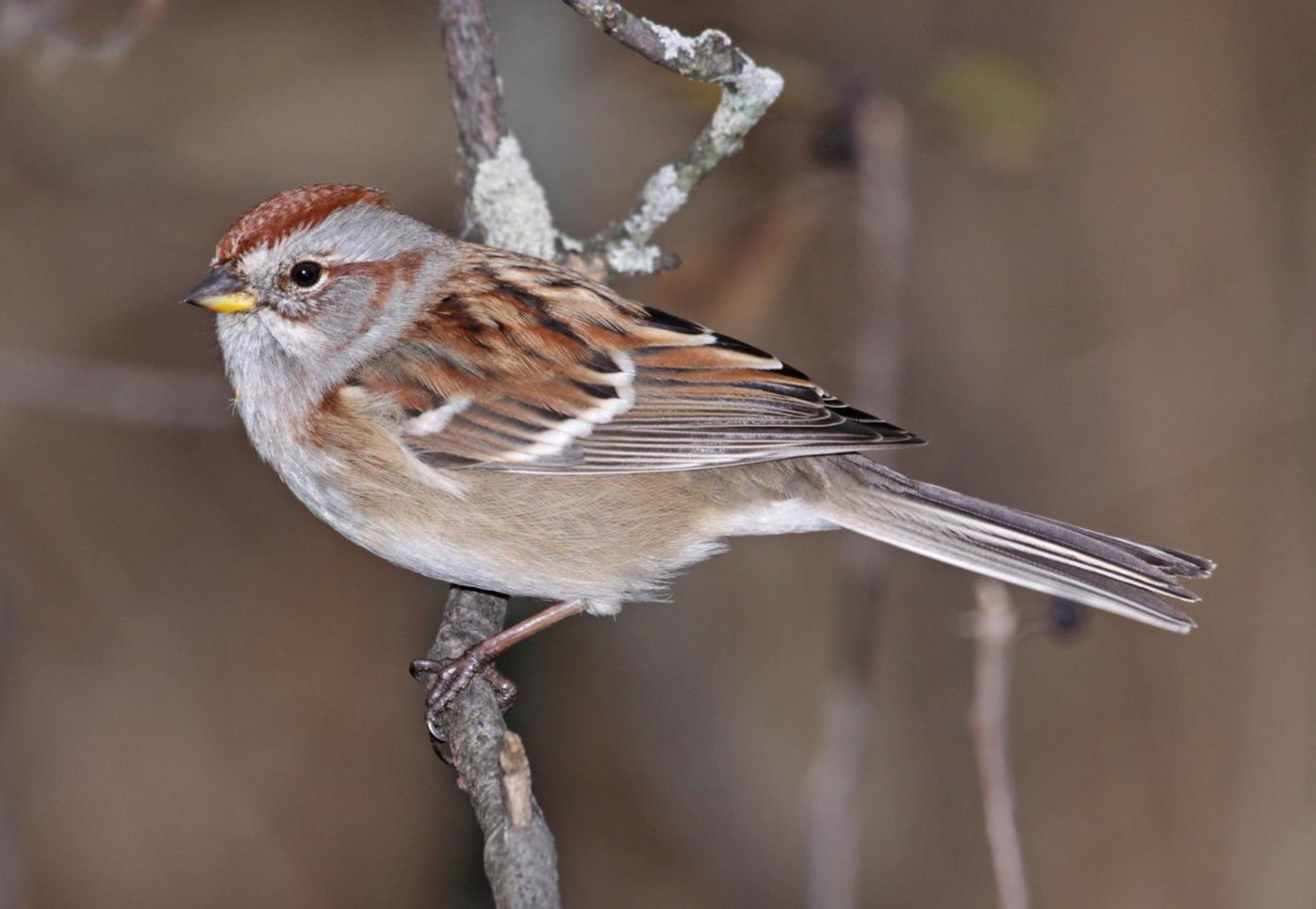 Grassland-dwelling birds such as sparrows, above, and meadowlarks have been hit especially hard. According to the study by Cornell Lab of Ornithology, more than 700 million birds across 31 species that make their homes in fields and farmlands have vanished since 1970.

If you’ve noticed being in the outdoors has become quieter and the landscape a little more drab, you are not alone. Entire species of birds have disappeared from our forests, fields and backyard feeders, experts have noted.

The colossal change is documented in research that was released by Cornell Lab of Ornithology last month, which found a decline of nearly 3 billion birds. The report is billed as the first comprehensive assessment of net bird population changes in the United States and Canada.

That means nearly 1 in 4 of all Eastern forest birds and 1 in 3 of all boreal forest birds that once brightened the landscape with their flashy feathers and cheerful songs in 1970 are no longer with us.

Dave Erler, senior naturalist at Squam Lakes Natural Science Center in Holderness, said he has observed a lot fewer birds stopping by for a snack. He hasn’t had to refill any of the six feeders and only added seed to an open tray-style food stop because the contents were old and rain-soaked.

“It’s pretty sobering. I would definitely like to know if anyone has a good theory. I’ve been feeding birds for 45 years year-round and have never seen anything like this drought of birds at the feeders,” he said.

The science center staff annually muster an army of citizen volunteers who help collect valuable data about bird populations. Some have been banding and monitoring birds at their winter feeders for more than 30 years.

Cornell Lab of Ornithology conservation scientist Ken Rosenberg led an international team of 12 scientists in an analysis of decades of data on bird population, including the Audubon Christmas Bird Count.

Reasons for the decline

Pesticide use and loss of habitat to farmland are some of the most significant contributors to the decline in bird populations, according to Rosenberg. Although scientists have known for a long time that certain bird species were threatened by human activities, this study reveals that these issues apply to birds of nearly all species.

The study found that the vast majority of birds that have disappeared aren’t rare or vulnerable endangered species, but include many familiar backyard birds like sparrows, juncos and starlings considered common and abundant.

And with the plunge in the bird population comes the loss of a number of key ecosystem services they provide, including pollination, eating insects, dispersing seeds and scavenging, among others.

Cook Anderson, a resident at the Taylor Community in Laconia, who has been an avid bird watcher for more than 60 years, said he has personally observed the declining number of birds.

He attributes the drop to habitat changes in many of the areas where certain species winter, coupled with the increasing amount of light pollution that disrupts the navigational abilities of nocturnal migrants.

“It’s a very complicated issue, but there is definitely a decline in some species,” Anderson said.

While mortality among young birds making their first migration to their wintering grounds is typically high, Anderson said, collisions with wind turbines and the guy-wires on illuminated communication towers, are proving fatal to breeding-age birds.

“It’s perilous being a small bird,” he said, noting those migrating up the Eastern Seaboard often encounter wind that blows them out over the ocean. Unable to land to rest, they ultimately exhaust themselves and drown.

The rarest bird in New Hampshire he has been privileged to see was a female gyrfalcon that was drawn by a group of ducks to a flooded area of Gilford Meadows in March.

“She made a half-hearted attempt to catch a duck,” Anderson said, adding that he had been looking for an Iceland falcon for 45 years.

The decline in North American bird populations over time works out to a loss of about 1 in 4 birds. However, the decline does not appear to be evenly distributed — most of the drop-off observed by the researchers is attributed to just 12 species, including some sparrows and warblers.

“The deficit is really significant,” said Dave Eastman of Tamworth, a naturalist who writes, broadcasts and lectures on environmental topics.

Eastman is a former member of the board of directors for the North American Bluebird Society. In the 1990s, he built 11,000 natural log-front birdhouses and distributed them across the country at stores dedicated to backyard birders.

He said the birds Granite Staters enjoy in the summer are long-range flyers from the interior jungles of Central and South America, or the Caribbean. While people in the East have always perceived that birds fly south for the winter, the more accurate view is that tropical residents come up here only for a few months. The conservation of these neotropical migrants is complex, Eastman said, because you must take into account both their breeding grounds and overwintering areas, and the migration routes in between.

“At first, the deforestation of the Amazon rainforest was blamed for the birds’ demise. However, the main problem rests closer to home, and we have something to do with it. If one thinks of all the houses built along the rural roads we used to live on as kids in the ’50s, one can grasp what’s happened. Those undeveloped tracts of land we used to call ‘the woods’ are what have disappeared,” he said.

Grassland-dwelling birds such as sparrows and meadowlarks and woodland birds such as the northern bobwhite and the wood thrush have been hit especially hard. According to the study, more than 700 million birds across 31 species that make their homes in fields and farmlands have vanished since 1970.

“We are really altering how this planet works,” Eastman added.

The plunge is attributed to changes in agricultural practices, including an increased use of pesticides and the conversion of open prairie into cropland. Pesticides kill insects some birds feed on and concentrated farming destroys nesting habitat.

To curb the losses of farmland birds, researchers contend that agriculture must be remade in nature’s image: less dependence on chemicals, more diverse in its flora and more hospitable to local fauna.

A bright spot in the study is the finding that waterfowl numbers, including ducks, geese and swans, are on the upswing. Experts credit conservation efforts mounted by groups like Ducks Unlimited with contributing money to preserve wetlands and create wetland refuges. Habitat protection, Eastman agrees, is a proven method in reversing the decline.

A threat to NH’s state bird

The same alarm about the threats posed by climate change is raised in a new report from the National Audubon Society. “Survival by Degrees: 389 Species on the Brink.” The report, which was released Thursday, identifies one of those species as the purple finch, New Hampshire’s state bird.

According to the report, if the Earth warms by 3 degrees Celsius, (5.4 degrees Fahrenheit) by 2100 as predicted, 13 out of America’s 50 state birds, including the purple finch, might struggle to live in the states they represent at least one season of the year.

Pamela Hunt is senior biologist for avian conservation at New Hampshire Audubon. She said scientists know the purple finch population is declining, but the reasons for that are less clear.

According to the study, the purple finch could lose 99% of its summer range in the state, and as the temperatures rise, could bypass New Hampshire altogether to stay within the conditions they have evolved to inhabit.

“Yes, they are a northern-adapted species that could be impacted as habitat shifts from climate change,” she said. “But there are lots of other things going on, and we don’t know how they will respond, or the time frame in which they will do it.”

Hunt said habitat changes due to climate change and development may be contributing to the decline of bird species. She also said “anthropogenic” (resulting from human activity) causes, such as cats, window and building strikes, power lines and wind turbines are estimated to kill 3 billion birds a year. “And cats are most of that,” she said.

“We’re slowly learning we might have another pesticide issue on our hands like we did with DDT years ago,” she said. “These new pesticides we thought might be safe might have sub-lethal effects on birds.”

That means birds might lay fewer eggs, and there might be fewer insects around that birds eat.

Meanwhile, add in the potential effects of climate, such as cold springs and heat waves that kill nesting baby birds, habitat loss and rising sea levels.

What bird lovers can do

But Hunt said there are steps bird lovers can take to protect their local birds: “Keep your cat indoors. Don’t spray pesticides on your property. Do something on your windows to minimize bird strikes.”

Even the kind of coffee you buy can help, she said. “Shade-grown” coffee — Hunt calls it “bird-friendly” — reduces habitat loss and requires fewer pesticides than plantation-grown coffee.

The Audubon study does include some optimism. The report’s authors looked at what would happen if humans could slow the rise of the Earth’s temperatures. Preventing just a 1.5-degree Celsius increase would reduce the vulnerability of 76% of North American bird species, they said. And 38% that would be vulnerable under the higher-temperature scenario would no longer be classified as vulnerable at all.

On Tuesday, the United States Fish and Wildlife Service and the Smithsonian Institution plan to release their annual state of the birds report, which is also expected to describe declines in bird populations and threats from changing ecosystems.