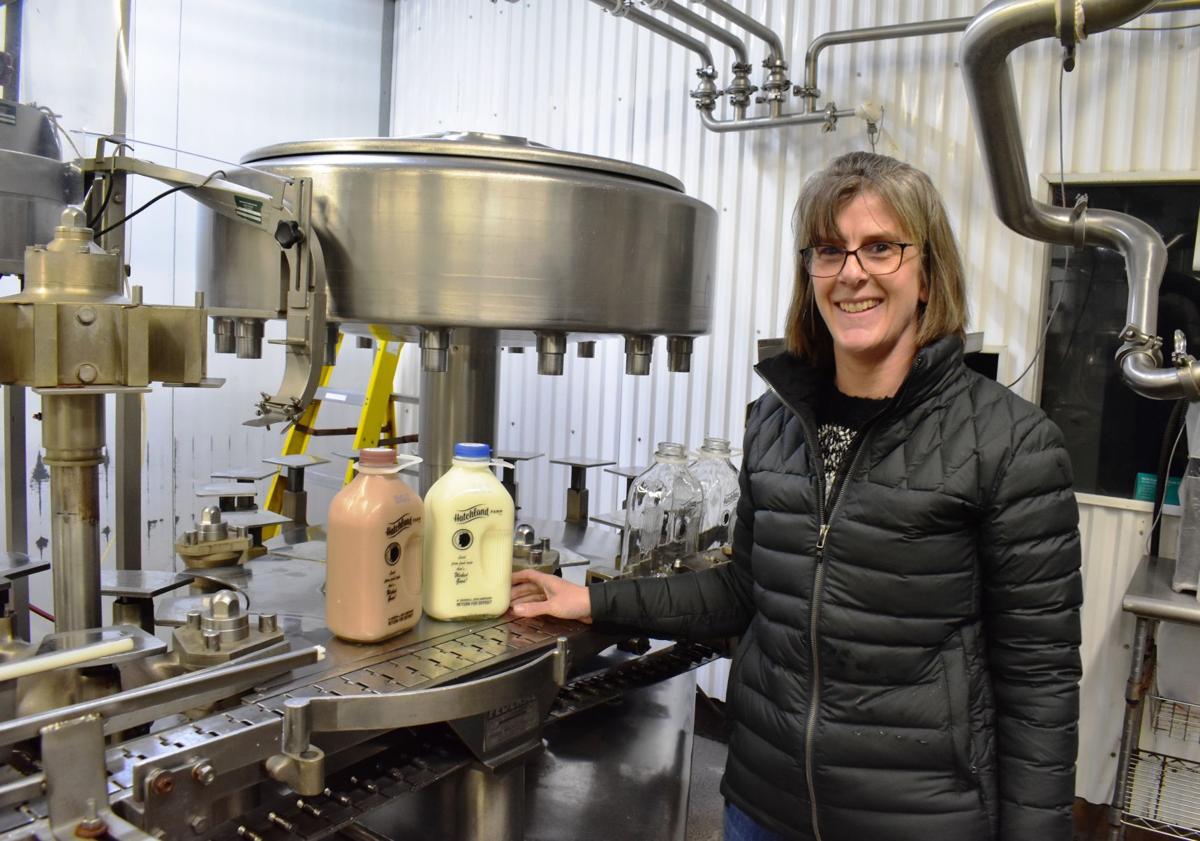 Kris May of Hatchland Farm stands in the dairy’s processing facility on April 16 with bottles of chocolate and regular milk produced there. 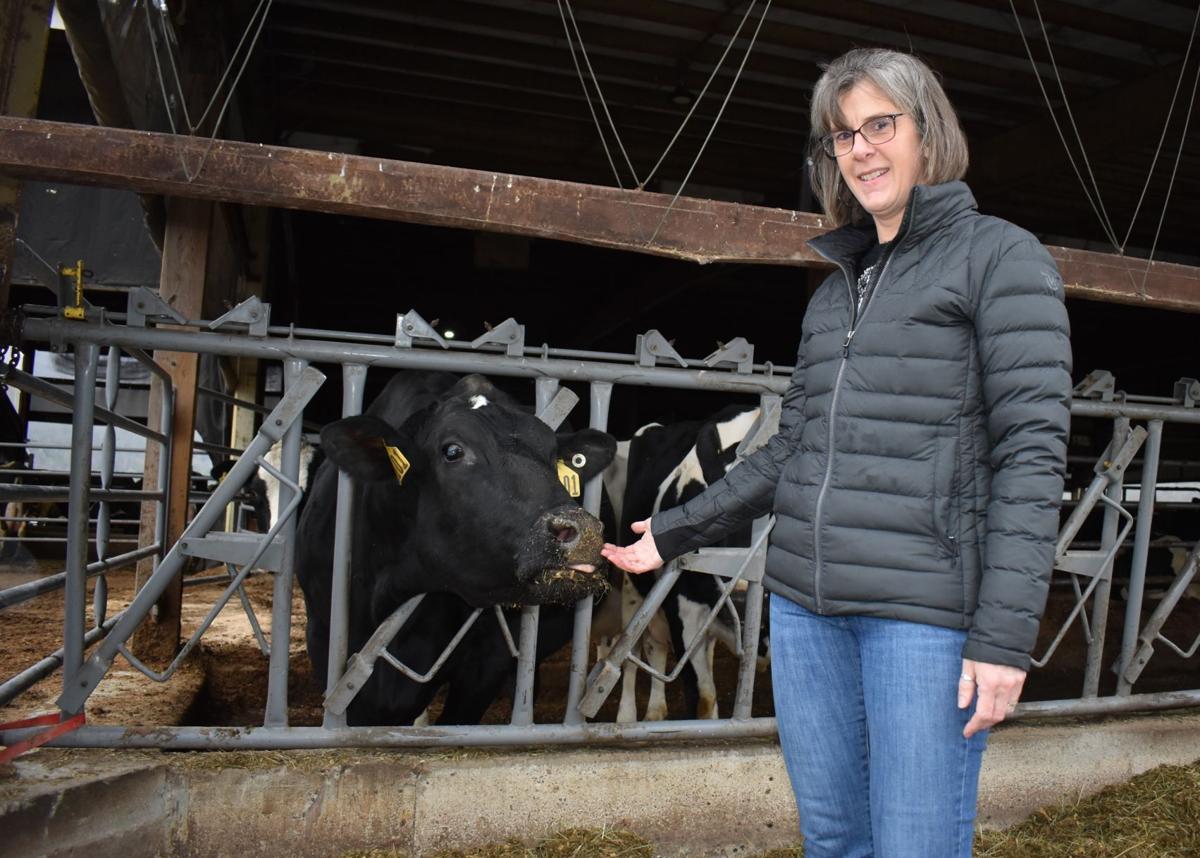 Kris May and one of the more than 400 cows at Hatchland Farm in North Haverhill. 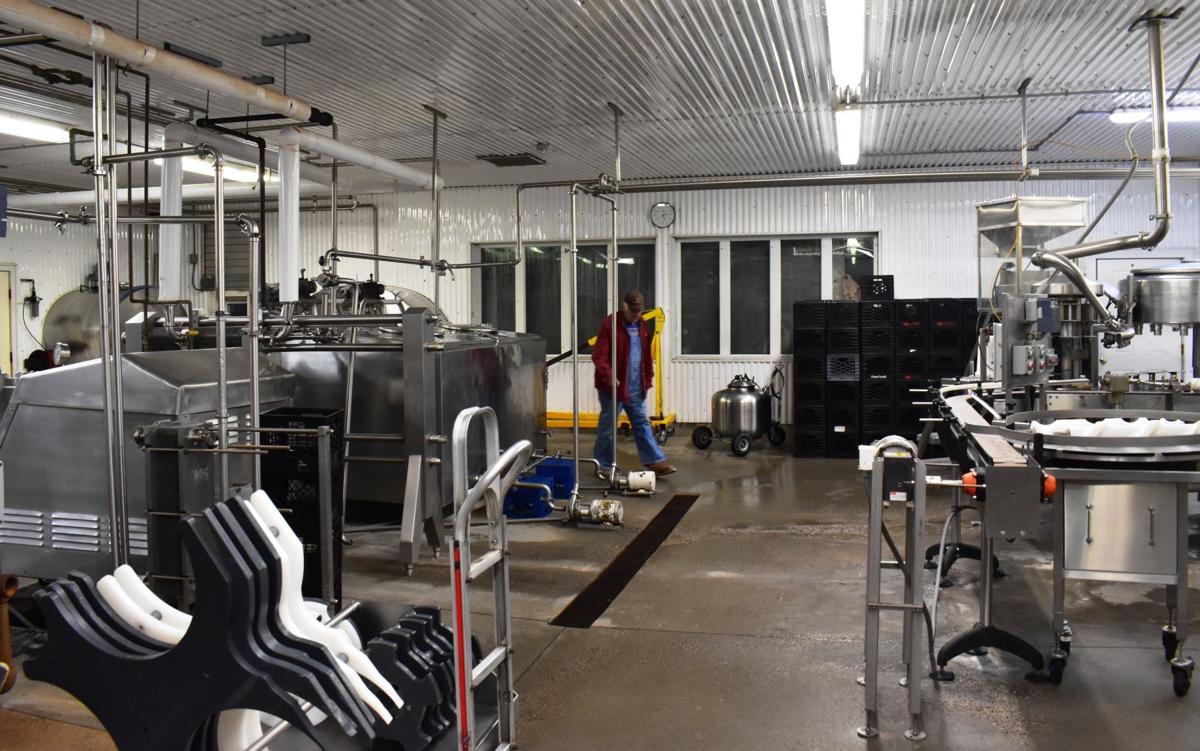 Howard Hatch, the founder and namesake of Hatchland Farm, walks through the processing facility at his dairy.

Kris May of Hatchland Farm stands in the dairy’s processing facility on April 16 with bottles of chocolate and regular milk produced there.

Kris May and one of the more than 400 cows at Hatchland Farm in North Haverhill.

Howard Hatch, the founder and namesake of Hatchland Farm, walks through the processing facility at his dairy.

NORTH HAVERHILL — Years before it became an environmental mantra, “reduce, reuse and recycle” was how New Hampshire dairy farms, including Hatchland Farm, were able to be good stewards of their lands and cows while also, unknowingly, being “green.”

Celebrating its 50th anniversary on Aug.1, Hatchland, on the east bank of the Connecticut River just below the Grafton County Complex, has a herd of 435 milking cows, “mostly Holsteins,” Howard Hatch pointed out.

Family-owned and operated, Hatchland produces and processes its own milk, cheese and ice cream products. The dairy sells milk in every New England state except Connecticut, and it operates a year-round farm store on Route 10 in North Haverhill that is also home to a seasonal ice-cream stand.

Later this year, the store and stand will move into new larger digs a short distance away.

As that project moves forward, the farm — under the guidance of Hatch, 75, and his wife, Kendra, their son Preston, daughter Kris May and her husband, Dave — will soon enter its sixth decade.

Among the largest producer/handler dairies in the Granite State, Hatch said his farm would be “a statistic if we weren’t both a little ‘old school’ and ‘new school,”” too, in terms of operation.

He notes proudly that he purchased two multi-story buildings from Grafton County for a total of $2.25, that he now uses as an office and residence for workers.

Although the farm’s rapid-release milking parlor was new when it was installed in 2011, most of the processed milk ultimately ends up in a glass bottle, which May said was not only old school, but also greener than putting it into plastic containers.

The water used to cool down milk is recycled as drinking water for the cows, then as wash-down water in the milking parlor and finally as an additive to make a liquid manure fertilizer that is stored in an underground tank.

Every year, an outside contractor comes to the farm to withdraw the manure and then inject it into the farm’s 675 acres on which corn and hay are grown to feed the cows. The process takes just two days, said Hatch, whereas when he did it, it took two weeks.

Aware that climate change is resulting in a drier environment, Hatch and May said Hatchland in the past five years has heeded the advice of Grafton County agricultural officials and began using “no-till” techniques to plant crops.

May said that when Hatchland put its new milking parlor online 10 years ago, it “cut our milking time in half,” while in connecting the parlor to the processing plant the farm made the tunnel larger than it needed to be, which permitted the water recycling.

Another savings is achieved by using a heat exchanger to raise the temperature of the cold milk entering the vat pasteurizer to about half of the target, she said, which increases the overall efficiency of that process.

Hatch added that during the winter, cold air is pulled into the processing plant to keep it cool, and both he and his daughter touted the benefits of glass versus plastic containers.

A past recipient of the Green Pastures Award, Hatchland Farm in 2020 was named the Cohase (Vt.) Chamber of Commerce’s Business of the Year for its stewardship, said Hatch.

Amy Hall, director of Granite State Dairy Promotion in Concord, said that because New Hampshire’s dairy farmers and their families live on their farms, “Taking care of the land, water, and surrounding environment has always been, and will always be, a top priority.”

Treating farm land “with anything less than the utmost respect and esteem,” said Hall, “is not a business model NH dairy farmers are interested in.”

More than 60 commercial fishermen and their supporters testified Tuesday in favor of a bill that would block any attempt to develop offshore wind projects anywhere along the Maine coast.