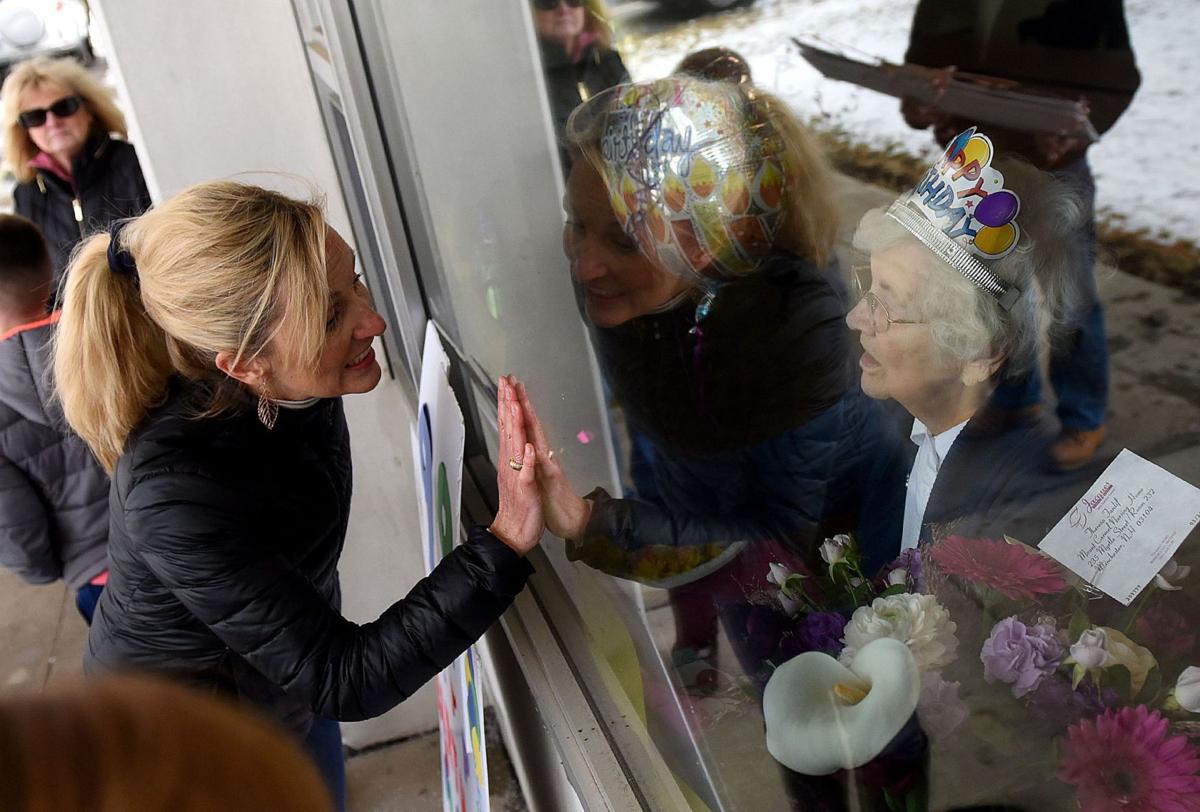 Therese Tardif is greeted on her 99th birthday by her daughter, Lisa Ford of Gilford, through a window at Mt. Carmel Rehabilitation and Nursing Center in Manchester on Tuesday. 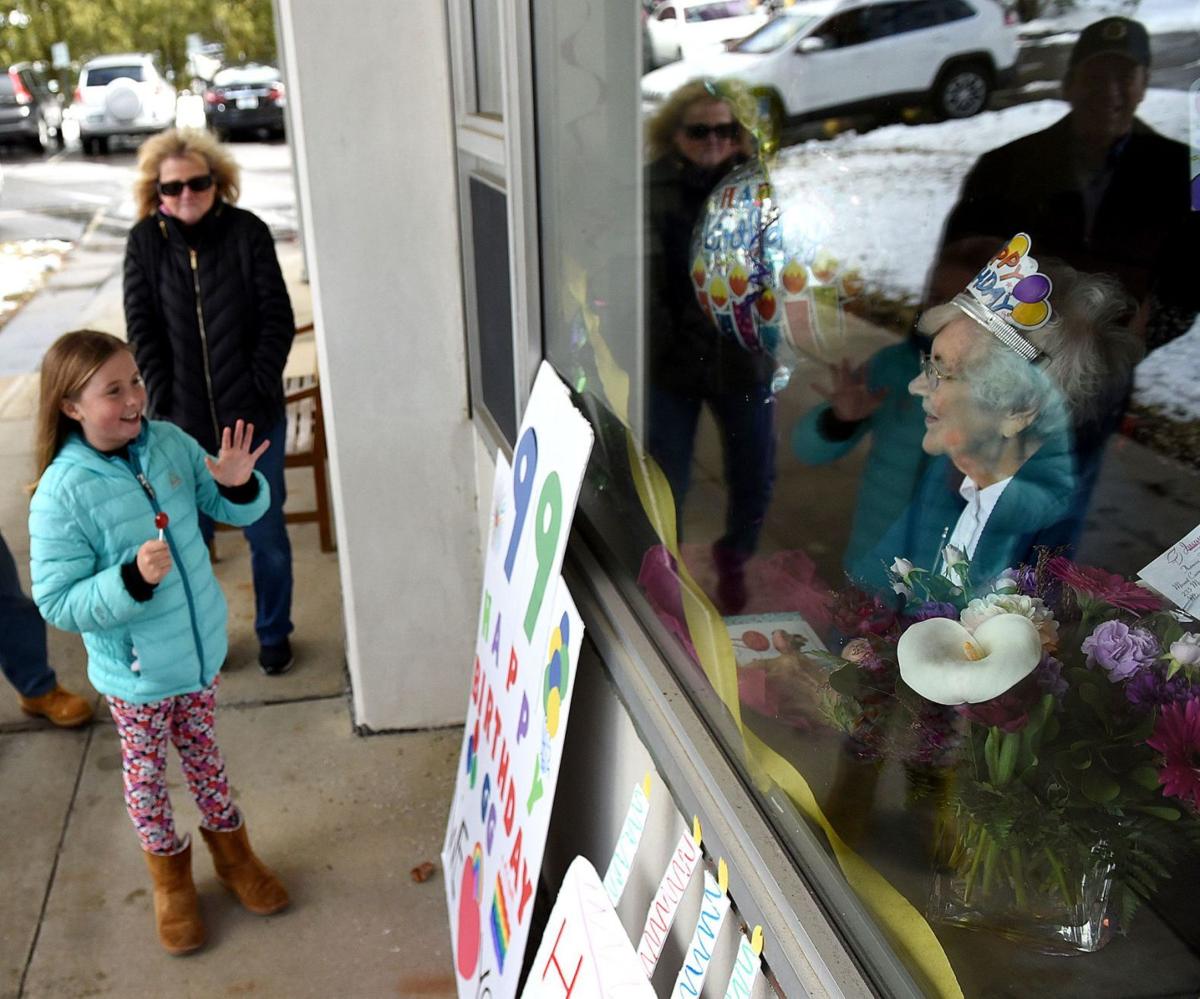 Casey O’Donnell, 8, of Londonderry waves to her great-grandmother, Therese Tardif, as she celebrated her 99th birthday. 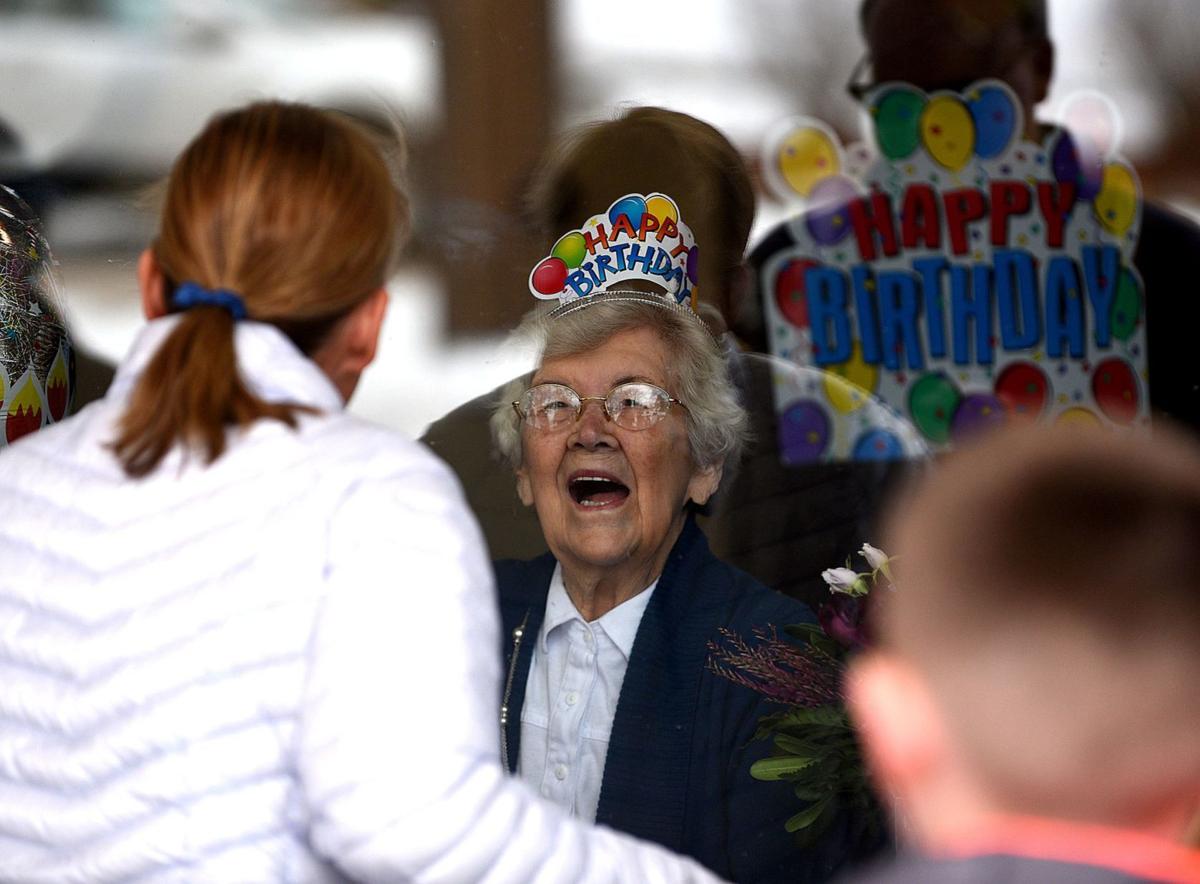 Therese Tardif celebrated her 99th birthday inside with her family outside at Mt. Carmel Rehabilitation and Nursing Center in Manchester on Tuesday.

MANCHESTER — Before the coronavirus crisis hit, Therese Tardif’s family had planned a big party for her 99th birthday on Tuesday.

But a bash at the Puritan Backroom, like last year, was out of the question. And since the governor halted visits to nursing homes earlier this month, Tardif’s children and grandchildren could not visit her at Mt. Carmel Rehabilitation and Nursing Center.

Drawing inspiration from families of elders around the country, Tardif’s family decided to celebrate just outside the nursing home’s window.

“Let’s give it a shot,” said daughter Judy O’Donnell.

Four of Tardif’s seven children, a grandchild and two great-grandchildren gathered outside Mount Carmel on Tuesday afternoon, with a few in-laws tagging along.

Around 1 p.m., they sang “Happy Birthday” outside. On the other side of the glass, nursing home staff perched a paper tiara on Tardif’s head and presented her with a cake.

Tardif stood against the picture window, and pressed her hand to the glass.

Linda Zapora, another daughter, said it was hard to be able to see her mother but not touch her. They could not hear her voice clearly through the window, could not give her a hug. But Zapora said her mother is most worried about keeping her family safe.

“She understands,” Zapora said.”I wish we could come in and see her. And she says ‘No, no I don’t want you to get sick.’”

After about 20 minutes outside the window, the family dispersed. Back to remote work, back to homeschooling. As they got in their cars, Zapora’s husband, Tom Zapora, called out.

“Can’t wait ‘til we have a party again!”

At least 38 people at the Mt. Carmel Rehabilitation and Nursing Center have tested positive for COVID-19 — seven staff and 31 residents.

A group of Nashua parents whose children have been in fully remote learning since March 2020 are seeking to remove Board of Education members they claim are denying students the right to free and adequate education.

The first Martin Luther King Jr. Day since the start of a racial justice movement sparked by the death of Minneapolis man George Floyd will also be the first in recent memory where celebratory breakfasts, acts of service and other events won’t take place due to the coronavirus pandemic.

I ’m a COVID-19 testing technician.

When lawmakers met on the lacrosse field at the University of New Hampshire on Dec. 2, at least 61 state representatives ignored orders, ordinances and policies requiring them to wear facemasks, according to a Union Leader tally.