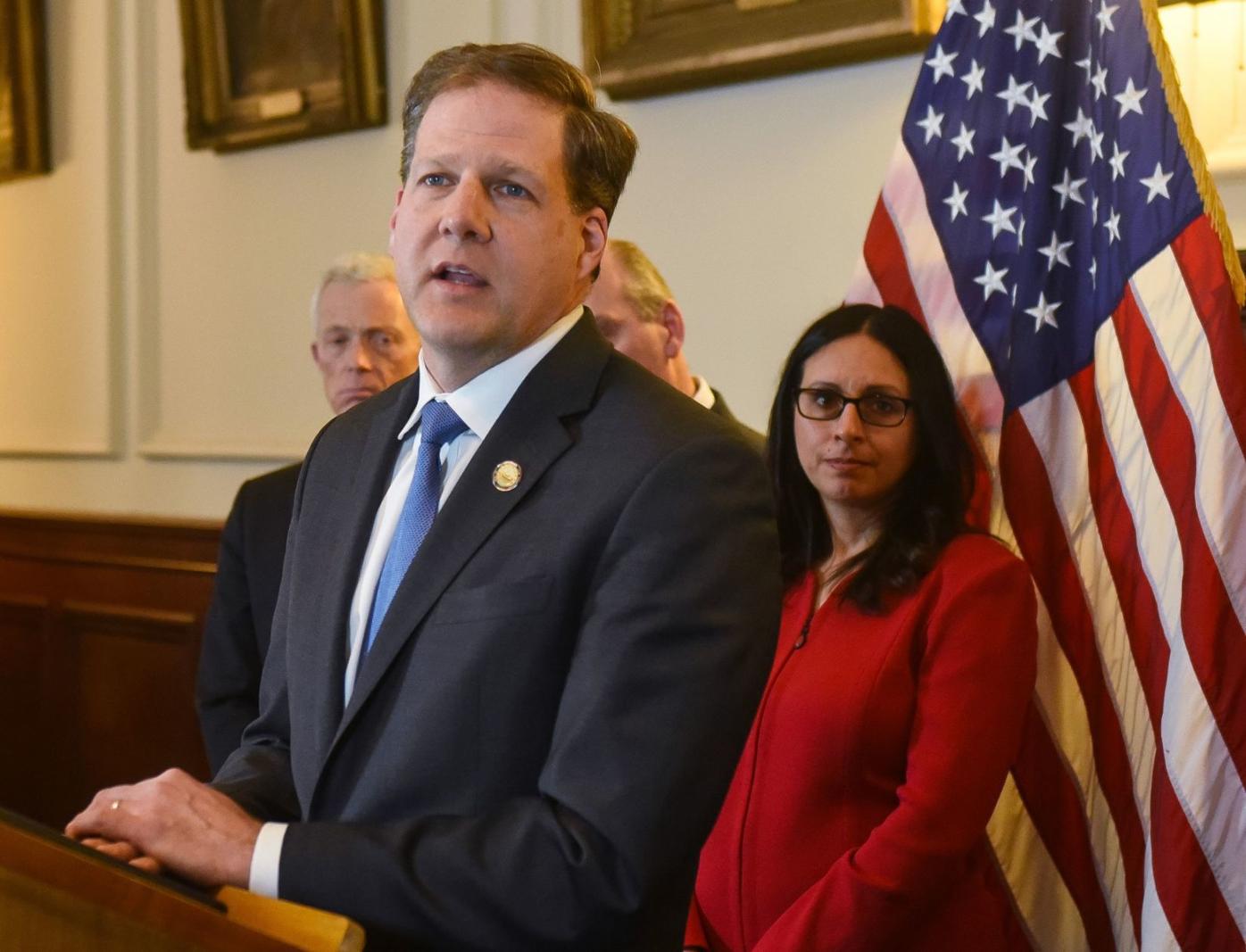 Gov. Chris Sununu speaks to reporters during a press conference on the state’s emergency plans for the dealing with the COVID-19 virus held at the State House in Concord on Friday. 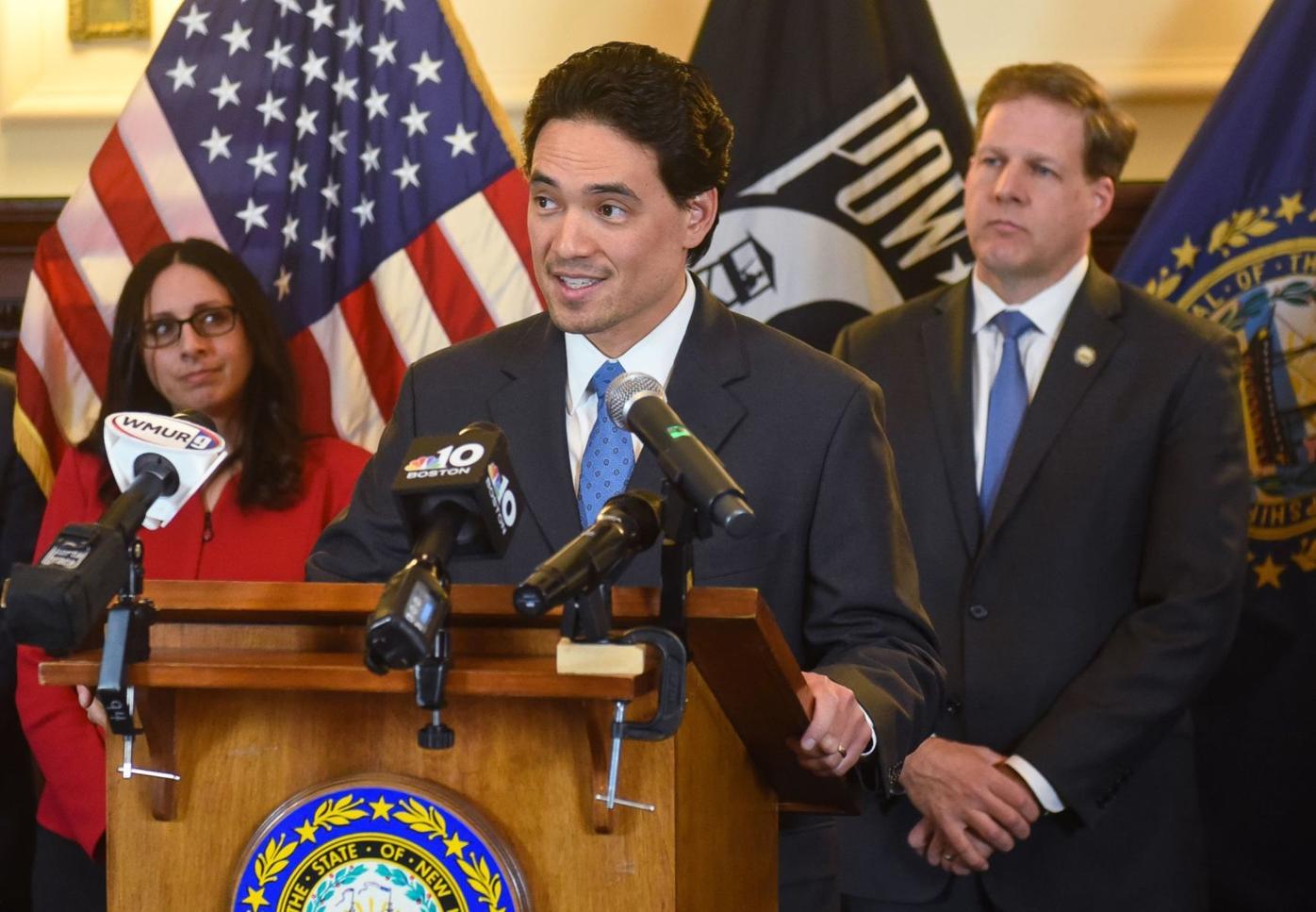 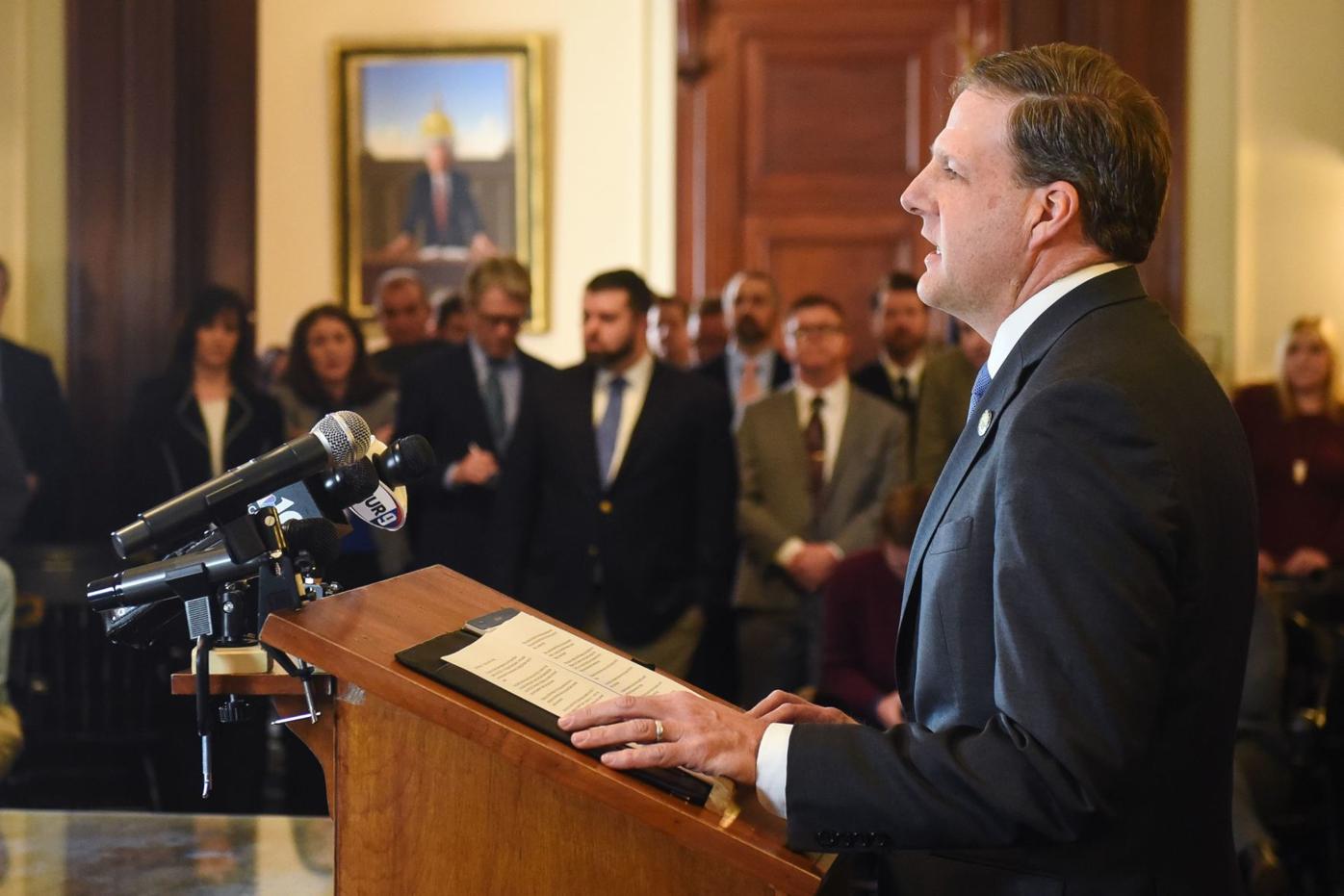 Gov. Chris Sununu talks about the state’s emergency plans to deal with COVID-19 at a press conference Friday at the State House in Concord.

Gov. Chris Sununu speaks to reporters during a press conference on the state’s emergency plans for the dealing with the COVID-19 virus held at the State House in Concord on Friday.

Gov. Chris Sununu talks about the state’s emergency plans to deal with COVID-19 at a press conference Friday at the State House in Concord.

A ban on visitors at nursing homes and assisted living centers was one of 18 steps Gov. Chris Sununu outlined as he declared a state of emergency over the coronavirus COVID-19 Friday.

Flanked by the state’s top public health, education and legal officials, Sununu stressed the risk to the general public remains low, with six confirmed cases of the virus and about 200 people in the state remaining under monitoring in self-isolation.

The emergency declaration “will allow the state to remain on top of the situation,” Sununu said at a State House news conference.

“It is imperative that residents remain calm. The one thing we can count on we know is truly that spirit of community, we have to keep that spirit moving forward.”

Sununu said while the stockpile of test kits at the public health lab isn’t large, any health care provider who sees a patient at risk of having COVID-19 is able to order a test to be done by a private lab such as Quest Diagnostics. The tests done that way take three to seven days to complete, state officials said.

Earlier Friday, President Donald Trump announced several other lab testing companies have been approved to offer other tests. Trump said there will soon be a series of “drive-thru” testing sites in the parking lots of major retailers including Walmart, Target, CVS and Walgreens.

State Epidemiologist Dr. Benjamin Chan said the state has enough tests to handle the current demand at the public health lab and the state will receive another 500 tests from the federal government next week.

The ban on nursing home visits, intended to protect elderly residents and their caregivers, takes effect at 11:59 p.m. Sunday.

The ban does not apply to medically necessary personnel, visitors for residents receiving end of life care or visitors necessary to provide for a resident’s psychological needs as determined by a licensed medical care provider.

Later Friday, Catholic Medical Center in Manchester announced that it would prohibit hospital visitors starting at noon on Saturday.

Sununu said it was premature to recommend closing all public schools but noted the state has changed its rules to allow all school districts on their own to decide to offer students to be taught remotely.

And it’s not yet time for New Hampshire to impose any limit on public gatherings.

“At this time we are not banning any kind of large community gatherings,” Sununu said.

“I think people on their own are making smart decisions at the community level about events.”

The governor said he would urge Congress to pass and President Trump to support allowing the use of federal Medicaid grants to pay for the testing and treatment costs for low-income individuals who don’t have insurance.

“We want to break down that cost barrier to testing for everyone,” he said.

Affected were postseason tournaments for all four ice hockey divisions and six divisions of basketball. Earlier, the plan had been to continue the majority of the NHIAA’s championship schedule with limited crowds, including the Division I boys and girls basketball and hockey championships.

After receiving notice on Friday that some schools were not able to play or host games, officials decided to suspend play, according to Jeff Collins, the league’s executive director.

“The general state of affairs across the country were a factor,” said Collins. “Look, we want the kids to play, but we have to be concerned about safety.”

Pelham police said they are limiting face-to-face contact with the public and asking people to not walk into the police station to file reports.

When emergency situations warrant a police response, officers will keep approximately 6 feet away from people when appropriate.

“These precautions are being put in place in order to continue sufficient staffing until the pandemic is minimized,” Police Chief Joseph Roark said in a statement to residents. “Our quality of service will continue at the highest professional level, however, the manner in which we do day to day business, is changing temporarily.

“Again this is for the safety of the public and first responders,” he wrote.

Residents should call the station for non-emergencies. Officers will take a report over the telephone. Email can be used for written statements or photographs of minor property damage.

The department has suspended fingerprint services at the station, car seat installations and assistance for VN verifications.

Gov. Sununu sent a letter Friday warning members of the Legislature’s Fiscal Committee of potential revenue shortfalls because of the COVID-19 pandemic.

“While New Hampshire has taken a number of steps to make our economy stronger than our neighbors, there is no way to predict the ultimate impact (from the pandemic) on New Hampshire’s economy and subsequent state revenue for the next 18 months,” the letter read.

The Republican governor goes on to say that he has asked all departments to make plans to “potentially reduce expenditures in the future.”

“The state is taking all steps necessary to address this pandemic,” the governor writes, “but we obviously do not know what actions, and what funding, will be needed as we move forward.”

After notifying the community that the child of a Farmington staff member had tested positive for COVID-19 and canceling classes for all schools on Friday, superintendent Ruth Ellen Vaughn said she was informed the information she had received was “incorrect.”

Vaughn sent out her original message to the Farmington School District community on Thursday night, saying that the schools would be closed “in an abundance of caution for cleaning.”

“All weekend activities will be canceled. At this time, we plan to continue with our professional development for staff on Monday, and hope to reopen on Tuesday,” Vaughn wrote.

Before noon on Friday, Vaughn wrote another message saying that she had “received clarification that the early information I received on the close contact of a staff member having tested positive for COVID-19 was incorrect.”

Vaughn said they are continuing with sanitation protocols and plans for staff training next week.

“I will provide further updates once I receive word on results and guidance from DHHS on our next steps. Thank you for your understanding in this fluid situation,” Vaughn wrote.

Organizers have called off this month’s March 29 St. Patrick’s Day Parade in Manchester.

“We are canceling out of the concern for the safety, health and well-being of our downtown partners, spectators, fans and participants,” read a post on the parade website.

The parade website lists 15 sponsors, including Comcast, Anthem Blue Cross and Brady Sullivan, and smaller businesses with Irish roots like Wild Rover Pub, The Shaskeen and the Ancient Order of Hibernians.

Partner airlines at the Manchester-Boston Regional Airport are reporting a dip in passenger travel through the end of March, according to airport officials.

“Preliminary information from our partner airlines is showing a softening of demand in our market through the end of March,” said Cheryl Paiva, a spokeswoman. “We anticipate this to continue for the foreseeable future.”

The airport expects travel return to normal after the disruption from COVID-19 passes.

The Lebanon Opera House has canceled all shows through April 30 and will be in touch with ticket holders about refunds and exchanges. The opera house will decide in early April if May and June events will be canceled as well.

At the Tupelo Music Hall in Derry, Sunday’s Dave Mason performance will be the last for a while. Owner Scott Hayward said he hopes customers will take a credit toward future shows or wait for the rescheduled performances instead of a refund.

The New Hampshire Philharmonic Orchestra is postponing its Drawn to the Music concerts that had been scheduled for this weekend in Salem. New dates are expected to be announced next week.

The state’s liquor commission said it has stepped up cleaning of the dozens of New Hampshire Liquor and Wine Outlets.{div}Employees have been instructed to clean often-touched surfaces like door handles and touch screens on an hourly basis. The commission is providing employees with gloves and hand sanitizer and is stocking sanitizing wipes near the carriages.

Democratic New Hampshire Congressman Chris Pappas and more than 100 other House members have called on Health and Human Services Secretary Alex Azar to establish a special period for enrollment in the Affordable Care Act Marketplace, because of the COVID-19 pandemic.

In a statement, Pappas pointed out that federal authorities have done so in the past for disasters such as Hurricane Harvey and Hurricane Dorian.

“By taking the crucial step of opening the federal exchanges at this time, Granite Staters would have the ability to protect not only themselves and their families but our communities as a whole,” Pappas said in a statement.

Close to 30 million Americans live without insurance and an estimated 44 million are underinsured, the lawmaker said in a letter to Azar.

Facing a medical emergency because of COVID-19, the healthcare system in New Hampshire is bracing for a potential surge in patients.

“This will be a challenge for our healthcare system,” Sen. Jeanne Shaheen said on Friday during a roundtable discussion with city leaders and emergency management officials.

There is already a shortage of masks, respirators and hospital gowns, according to Shaheen, who said she is hopeful that the recent $4.9 million allocated to the state to combat the disease will result in the production of more personal protective equipment for not only patients, but medical workers as well.

Panic-buying has led to empty store shelves and even rationing of essentials like toilet paper, hand sanitizer and disinfecting wipes.

For first time, NH cancels superior court jury trials for a month due to coronavirus fears

In an unprecedented move, the New Hampshire Judicial Branch has canceled all criminal and civil jury trials in Superior Court for the next 30 …

CONCORD — New Hampshire retailers remain split over whether to more fully open up their stores to more customers or stay open at 50% capacity due to COVID-19, officials said.

NH skiers must 'mask up' this season

CONCORD — Skiers and snowboarders must wear masks at all times except while “eating, drinking or descending down the hill” under proposed COVID-19 rules for the coming ski season in New Hampshire.