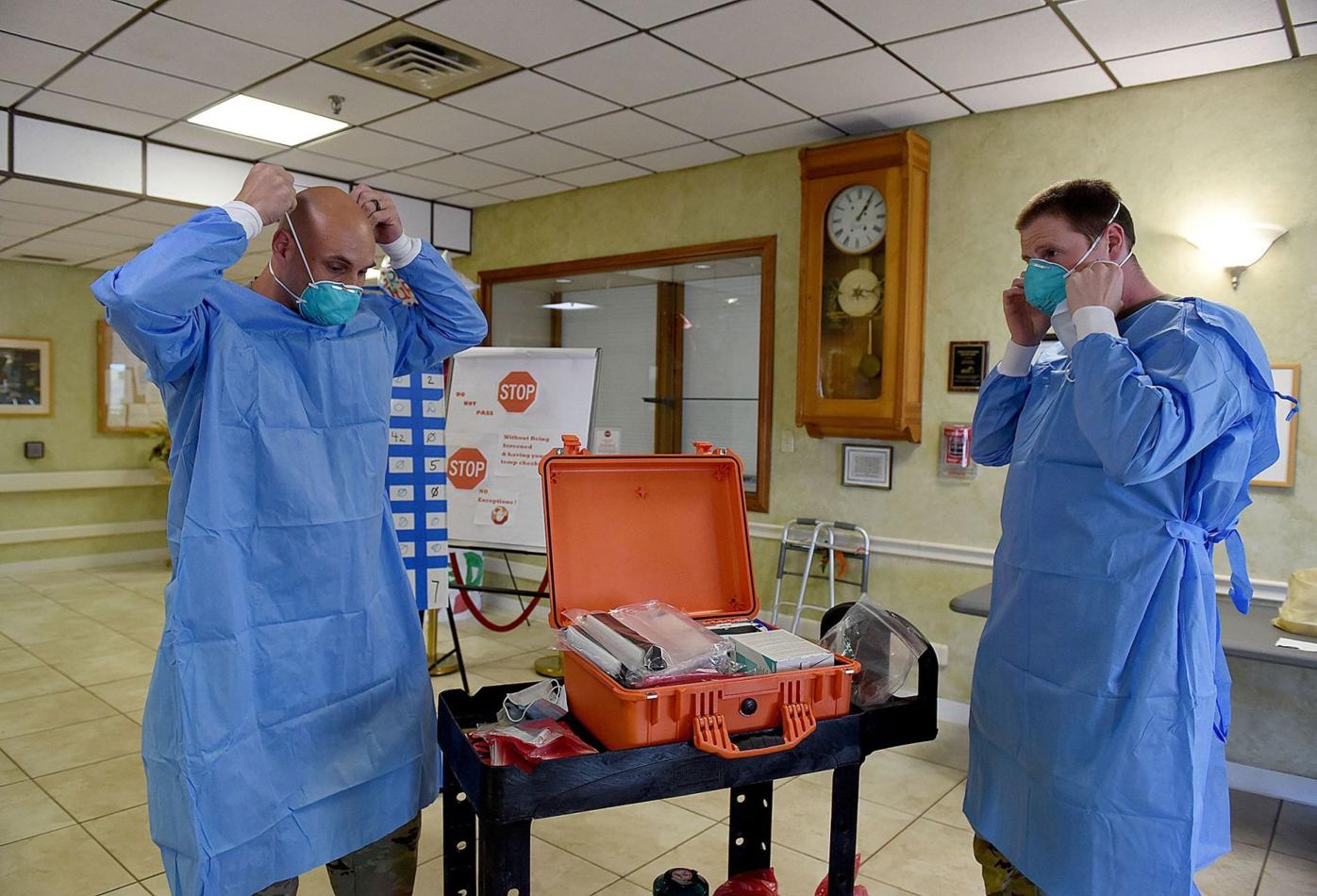 Army National Guard Sgt. Derek Richardson of Conway, left, and Sgt. Timothy Huntley of Portsmouth put on protective equipment for another round of COVID-19 testing at Hillsborough County Nursing Home. 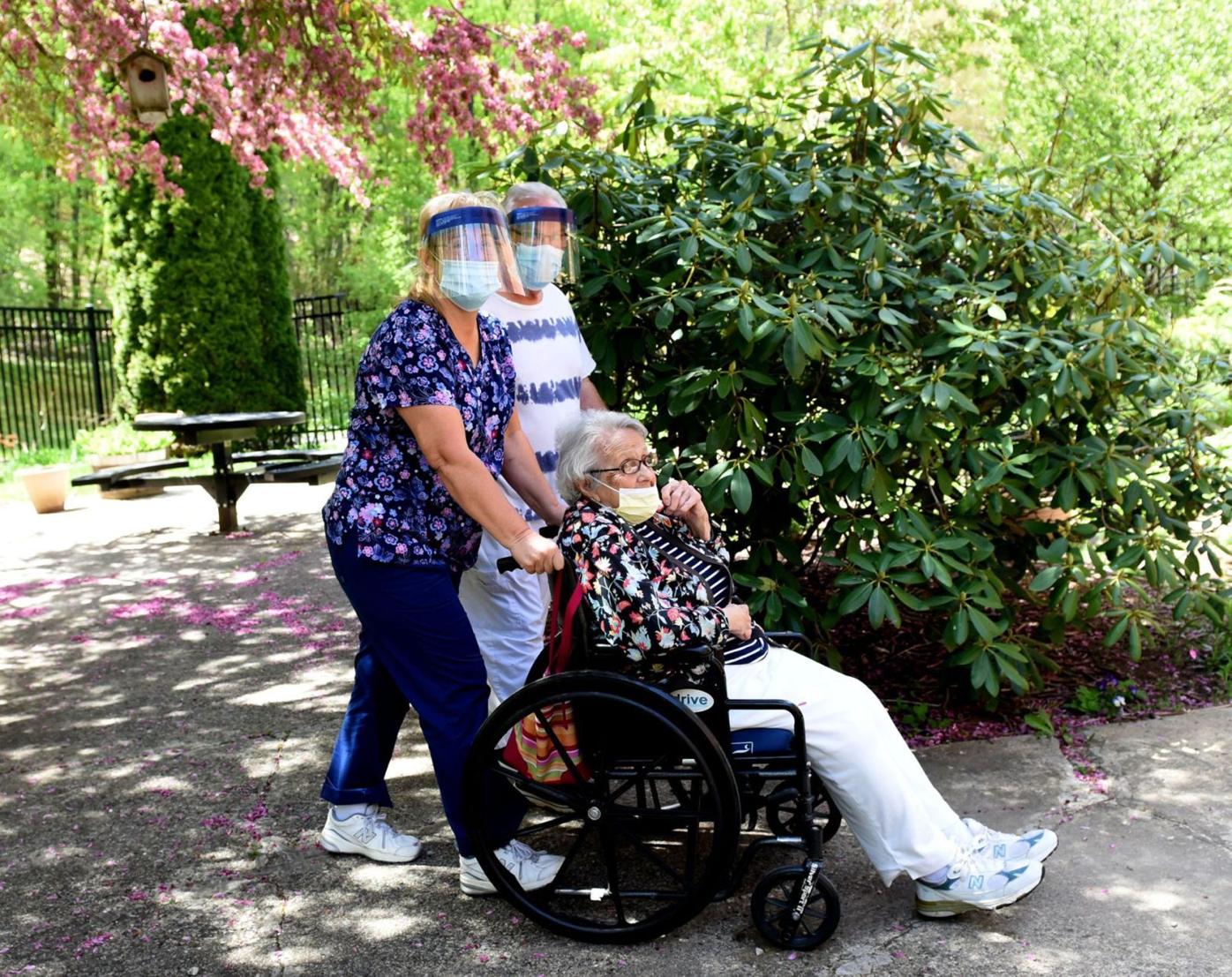 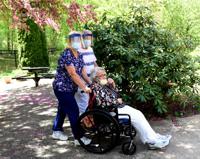 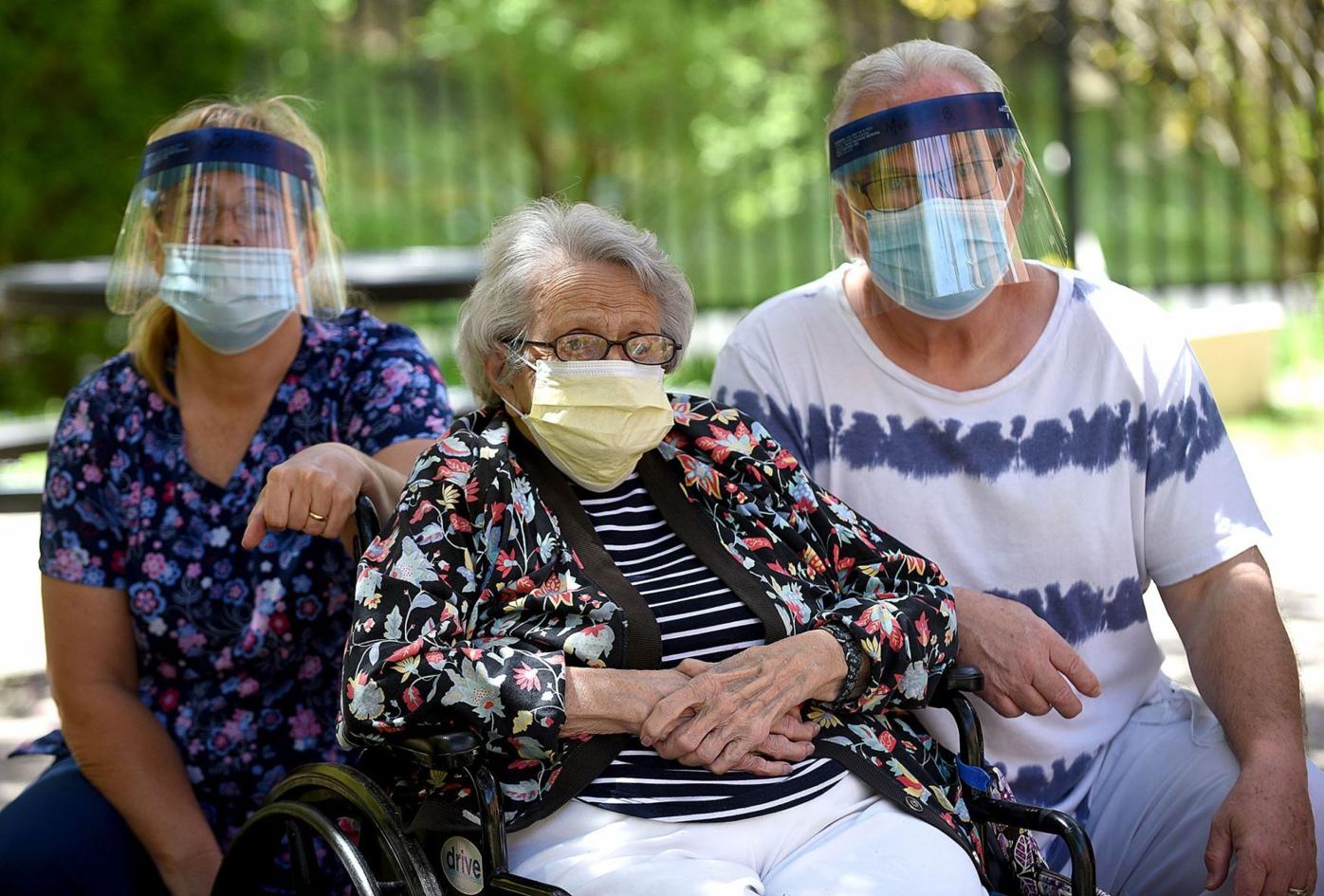 Staffers Bonnie Briggs, left, and David Schulze pose with resident Annette Richer at Hillsborough County Nursing home in Goffstown. Richer, 92, says some residents are managing the isolation caused by the pandemic, but “others spend time crying because they want to see family.” 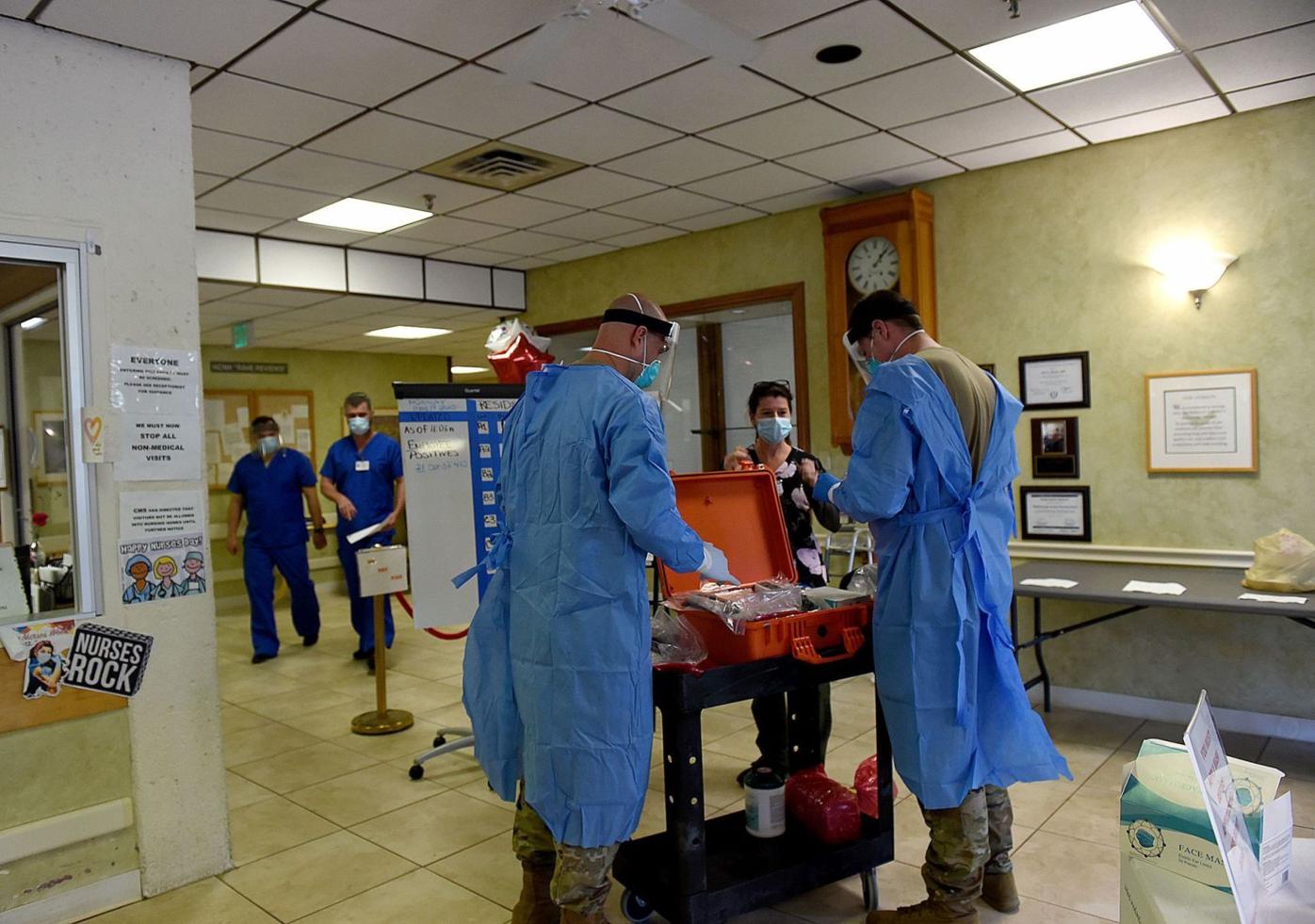 Army National Guard Sgt. Derek Richardson of Conway, left, and Sgt. Timothy Huntley of Portsmouth put on protective equipment for another round of COVID-19 testing at Hillsborough County Nursing home in Goffstown on May 19, 2020. 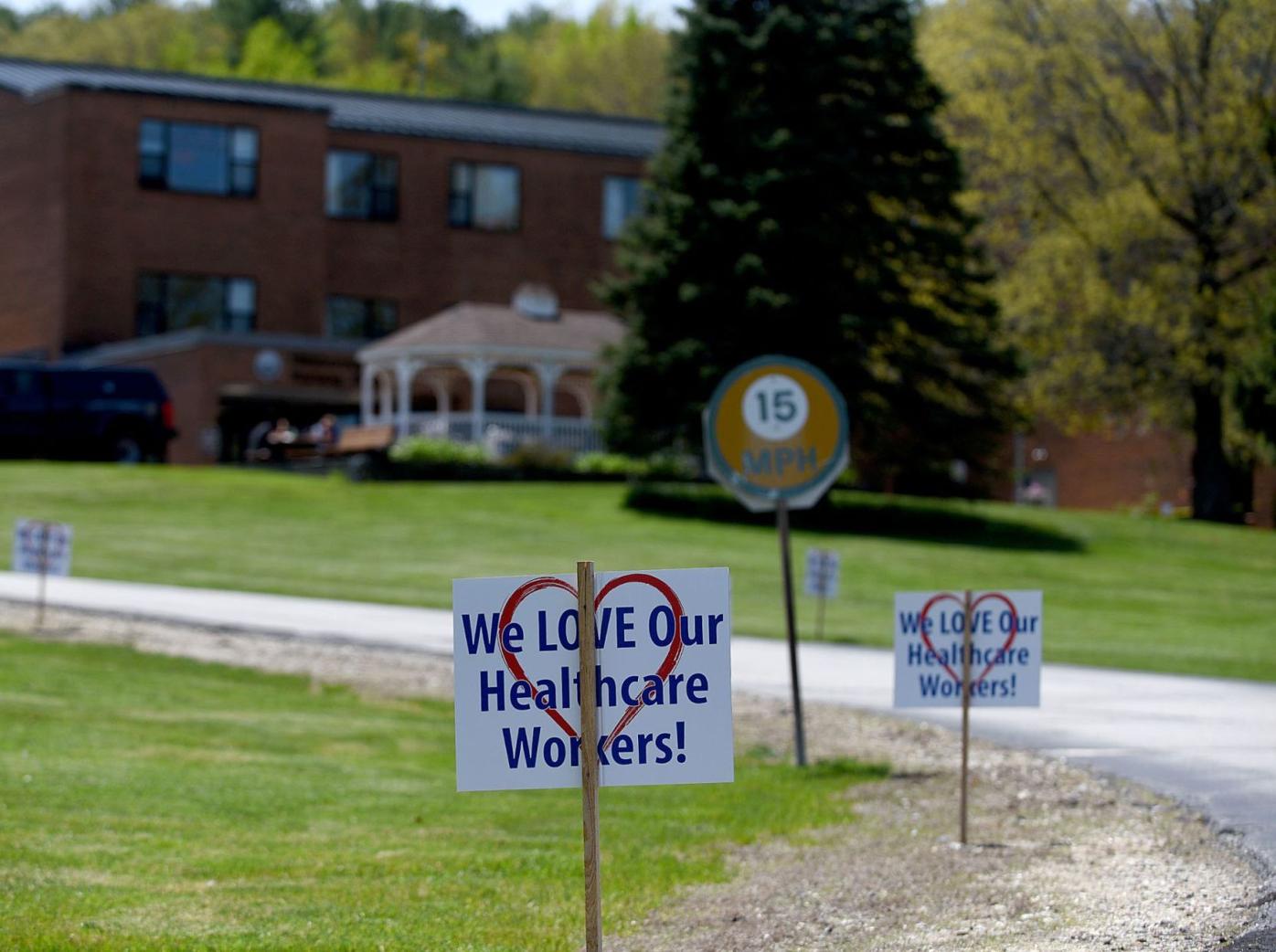 Signs of support line the driveway to Hillsborough County Nursing Home in Goffstown. 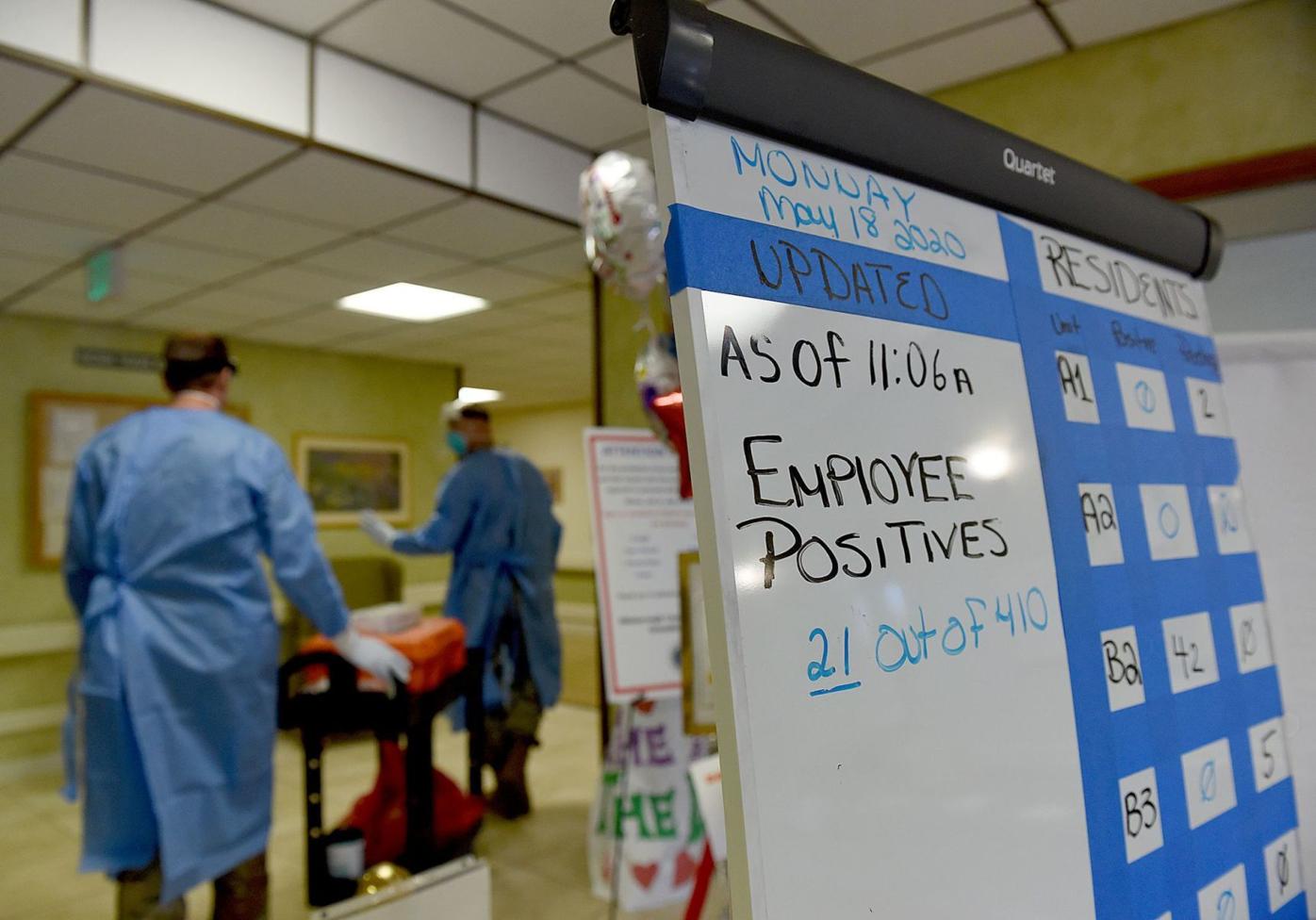 The number of employees who have tested postitive for COVID-19 is kept up to date on a board near the front desk at Hillsborough County Nursing Home in Goffstown. The count was 21 on Tuesday morning.

A s Christine Benner celebrated a subdued Mother’s Day two weeks ago, she received a simple text that would upend her life.

It was a report of a single positive case of COVID-19 — a resident at the Hillsborough County Nursing Home in Goffstown, where Benner works as a licensed nursing assistant. A carefully erected dam of testing, isolation and other infection control measures was cracking.

It was an outbreak.

The numbers kept increasing as test results came in. As of Friday, the nursing home had reported infections of 45 patients and 22 staff.

Weeks earlier, Benner let her bosses know she would work with COVID-positive patients when the time came.

“Who else is there to help out other than someone who’s been through everything?” asked Benner, who has worked at the county home for 40 years.

The nursing home is one of 15 long-term care facilities experiencing a COVID-19 outbreak. Nursing homes are where 78% of COVID-19 fatalities have occurred. They also are where people are most likely to get COVID-19, according to the state.

Fear is the hardest

With 300 beds, Hillsborough County Nursing Home is one of New Hampshire’s largest nursing homes, more than twice the size of most.

Its operation has received above-average rankings from the federal government. But like all nursing homes, the county-run facility was struggling with issues such as staff shortages and Medicaid payment levels before the outbreak, said Administrator David Ross.

Pandemic, personal protection equipment shortage, supply chain breakdown, staffing crisis, school and child care closures — any one of those things could be cause for a disaster drill, said Ross, who has 30 years in nursing home administration.

“This is the hardest time in my career,” he said. “There’s so much fear in the building. Fear from staff. Fear from families. Fear from the residents,” he said.

Ross welcomed a reporter’s questions, believing in the necessity of getting the word out as he senses anger and disillusionment with nursing homes. He also made Benner and a resident available for Zoom interviews.

Benner works the day shift on the B2 unit, which has become the COVID-19 ward.

She enters through the B2 dining room, which has been converted into an employee-support room. Employees take their breaks there. They use separate, makeshift rooms to don and to shed their daily PPE — a head covering, two surgical masks, a face shield, a gown, two sets of gloves, a pair of booties.

The residents don’t have PPE and wear mostly johnnies.

Many B2 residents have been weakened by fevers and gastrointestinal issues. They need to be cleaned and hydrated. Initially, falls were a problem because the residents, unaware of their weakness, tried to get out of bed and collapsed, Benner said.

The residents are in rooms of two or four. In teams of two, the LNAs work efficiently. For example, as a team they can prop up patients without waiting for additional help.

At times, the mood is light and Benner banters with residents. At other times it can be challenging.

“Some of them say they don’t want to die this way. They want to make it to the next day. It’s a day-by-day thing, we tell them,” Benner said.

In the first week, one resident died after being transported to the hospital.

“It’s a loss for us, a hard loss,” Benner said, her tough composure breaking. “I have no answers (about how to stop it). It’s a virus that just spreads so quickly, and it infects our elderly so hard.”

As of Thursday, 19 of the 45 COVID-19 residents had transitioned out of B2, either surviving slight symptoms or never developing any.

The unit has no air conditioning or fans in order to avoid transmission of respiratory droplets.

After a couple of hours, the workers are drenched in sweat, but face masks prevent someone from even taking a drink of water. The LNAs and nurses watch out for each other, sending one another to the patio or the dining area when a face turns red or a stomach turns nauseous.

The workers are wrapped up so tightly that they call the moment they remove their masks and shield an “air-gasm.”

Three and a half hours is about all one can handle before taking a break, Benner said. She has worked some 12-hour shifts, and some work weeks have run 50 or 60 hours. That’s because it’s hard to find help.

As of last week, Ross had 130 vacancies among the staff of 400. That included employees who are out in compliance with quarantine guidelines. It also includes the 25 or so staff who quit when Ross announced the outbreak.

“I have to respect that,” he said.

Others struggle but eventually come to work.

Ross recently spoke to a nurse who sat in her car for 15 minutes gathering the strength to start her shift. She finally did, but called home and made arrangements for her 5-year-old daughter to live with relatives.

“These people need me,” the nurse told Ross.

Ross said he has filled some vacant slots with per-diem workers and furloughed hospital workers. But as hospitals resume more services, those workers likely will leave, he said.

He has tried to boost morale by placing signs at the facility to show appreciation for his workers, and he arranges a ceremony that includes hand claps for the shift changes at B2.

The nursing home is unionized, and people doing Benner’s job start at $12.40 an hour, a low rate that forces Ross to emphasize the benefits when he interviews applicants. For people who make it a career, the pay can climb to a top hourly rate of about $24.

On top of that, Gov. Chris Sununu has added a $300 weekly stipend. Benner said she has yet to see that check, but she knows it is coming.

If staffing shortages continue, state health officials are drafting crisis standards of care, which would reduce work demands and get more people on the job. Residents would remain in bed. They would be bathed and showered less. Staff would cut back on the distribution of unnecessary medications such as vitamins and eye drops.

Other standards involve speeding up licensing of LNAs and permit asymptomatic COVID-positive workers to work in COVID units.

Ross has said he won’t have positive COVID-19 staff working on B2 right now. But he said “at times we are approaching” reduced standards for patient care.

What now? What next?

If more outbreaks occur, the state can call in the volunteer Medical Reserve Corps, said Beth Daly, the state’s director of disease prevention.

An outbreak prompts a team of state officials to become involved and brings new guidelines into play. The state reviews a nursing home’s infection and control measures and arranges for frequent testing, Daly said.

It also makes housing available for workers who don’t want to go home and risk infecting their families.

Daly said a nursing home shouldn’t be judged by an outbreak, given how frequently the virus is transmitted by asymptomatic and pre-symptomatic carriers.

Even before the outbreak, the nursing home was in a near-lockdown mode. No visitors or volunteers. Dining rooms and activity rooms were barely used.

Residents spend most of their time in their rooms.

A retired medical technologist, Annette Richer used to work in a hospital lab and helped with blood tests, autopsies and biopsies, all without the benefit of PPE.

Activities and socializing are limited to hallways, and residents must maintain social distancing. Meanwhile, any staff who has contact with patients must wear a mask and face shield, even outside B2.

“Some are OK with it,” Richer said about the isolation. “Others spend time crying because they want to see family.”

When will it end?

Ross said there’s no telling how the virus entered his nursing home. Nearly all infections involved residents of B2.

Employees are the usual source. But the nursing home allowed families to gather outside the windows of residents, and in some cases they opened windows, removed screens and touched one another, Ross said.

He admitted feeling smug last month, thinking his nursing home would escape an outbreak. Then an inspector from a Centers for Medicare and Medicaid Services field office in Boston visited at month’s end.

“She said, ‘You folks are doing an amazing job,’” Ross said. “Then she said, ‘Good luck, because it’s coming.’”

In the 19 years since the 9/11 attacks, the New Hampshire National Guard has been deployed multiple times to defend the nation in far-off dese…