A federal judge chastised Immigration and Customs Enforcement on Thursday for not doing enough to identify medically vulnerable immigration detainees at the Strafford County jail. The following day, a worker at the jail’s medical unit tested positive for COVID-19.

For the last two weeks, the jail — which holds immigrants picked up by Immigration and Customs Enforcement (ICE) — has been the subject of bail hearings before U.S. District Court Judge Landya McCafferty, who decides whether ICE detainees should be released because of their vulnerability to the coronavirus.

Fourteen ICE detainees have been released — seven by McCafferty and another seven that ICE voluntarily released in the face of the bail hearings.

On Friday, the ACLU said it confirmed that a jail employee tested positive for COVID-19. The employee worked in the jail’s medical unit and had been there on Thursday, said Nathan Warecki, one of the lawyers volunteering on the case, which has drawn help from four prominent New Hampshire law firms and the ACLU.

Strafford County officials issued a statement saying the employee had no inmate contact and has been sent home according to guidelines.

McCafferty has repeatedly praised Brackett’s operation of the jail. But on Thursday, she released a lengthy order that said Strafford County is not taking special precautions for inmates vulnerable to COVID-19. She called for May 29 hearing where ICE must address a host of issues such as COVID-19 risk reduction, testing of inmates and identification of high risk inmates.

And she said there is no indication that ICE is trying to identify inmates at high-risk. 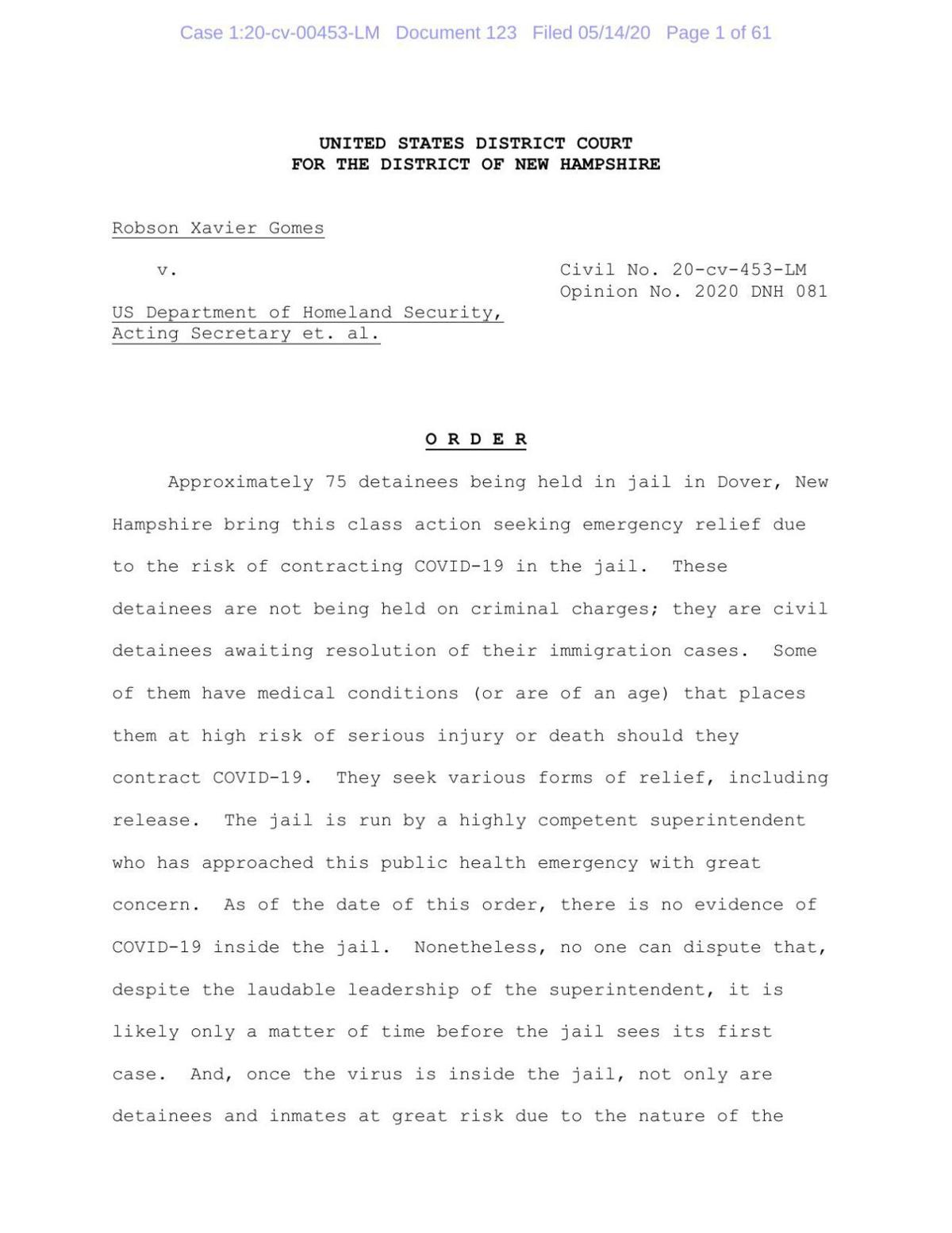 “The court is deeply troubled by respondents’ failure to identify high-risk detainees until forced to do so by this lawsuit,” McCafferty wrote.

An email to the office of the top federal prosecutor in New Hampshire, U.S. Attorney Scott Murray, was not immediately returned.

Warecki, who works for the Manchester firm of Nixon Peabody, stressed that the ICE detainees are not facing criminal charges and have more constitutional rights than typical inmates.

“Safer alternatives (to incarceration) are available, and the court has recognized this by releasing seven detainees after bail hearings,” Warecki said.

Numerous attorneys, many of them working without pay, participated in the bail hearings, Warecki said. One of the most compelling involved a Cameroon native who traveled to south America and presented himself at the U.S. border and asked for asylum.

He has been locked up for 21 months and moved to several ICE facilities while his health deteriorated. He was freed May 7. Warecki said two other cases involved asylum seekers who have no criminal past. Other cases involved inmates with minor infractions such as drunken driving or minor crimes from years ago, he said.

Those with families can move in with them.

Those without family or nearby connections will quarantine for 14 days in hotel rooms provided by the Seacoast Interfaith Sanctuary Coalition, said David Grishaw-Jones, pastor of the Community Church of Durham. After that, church members will put them up in their homes, he said.

A second immigration detainee at the Strafford County jail tested positive this week for COVID-19. The detainee arrived from a Connecticut jai…