A judge has ordered the release of a Valley Street jail inmate who has COVID-19 following “absymally inadequate” monitoring of his fragile medical condition.

Manchester resident Hernan Rijos-Calderon, 32, who is facing several violent felony charges, was ordered to home confinement on Jan. 13. He is the third inmate released from the jail because of COVID-19, according to an organization of defense lawyers monitoring the jail.

In a two-page order, Hillsborough County Superior Court Judge Jacalyn A. Colburn noted that Rijos-Calderon reported that his COVID-19 symptoms had worsened over a 32-day period.

Yet nurses checked him only once a day, he hasn’t seen a doctor since September, and the jail’s head nurse had testified she didn’t know his symptoms were getting worse.

“Given the gravity of the potential implications for someone with known high-risk underlying complications, this seems abysmally inadequate,” Colburn wrote. Colburn urged Rijos-Calderon to visit an emergency room and see a doctor upon release. 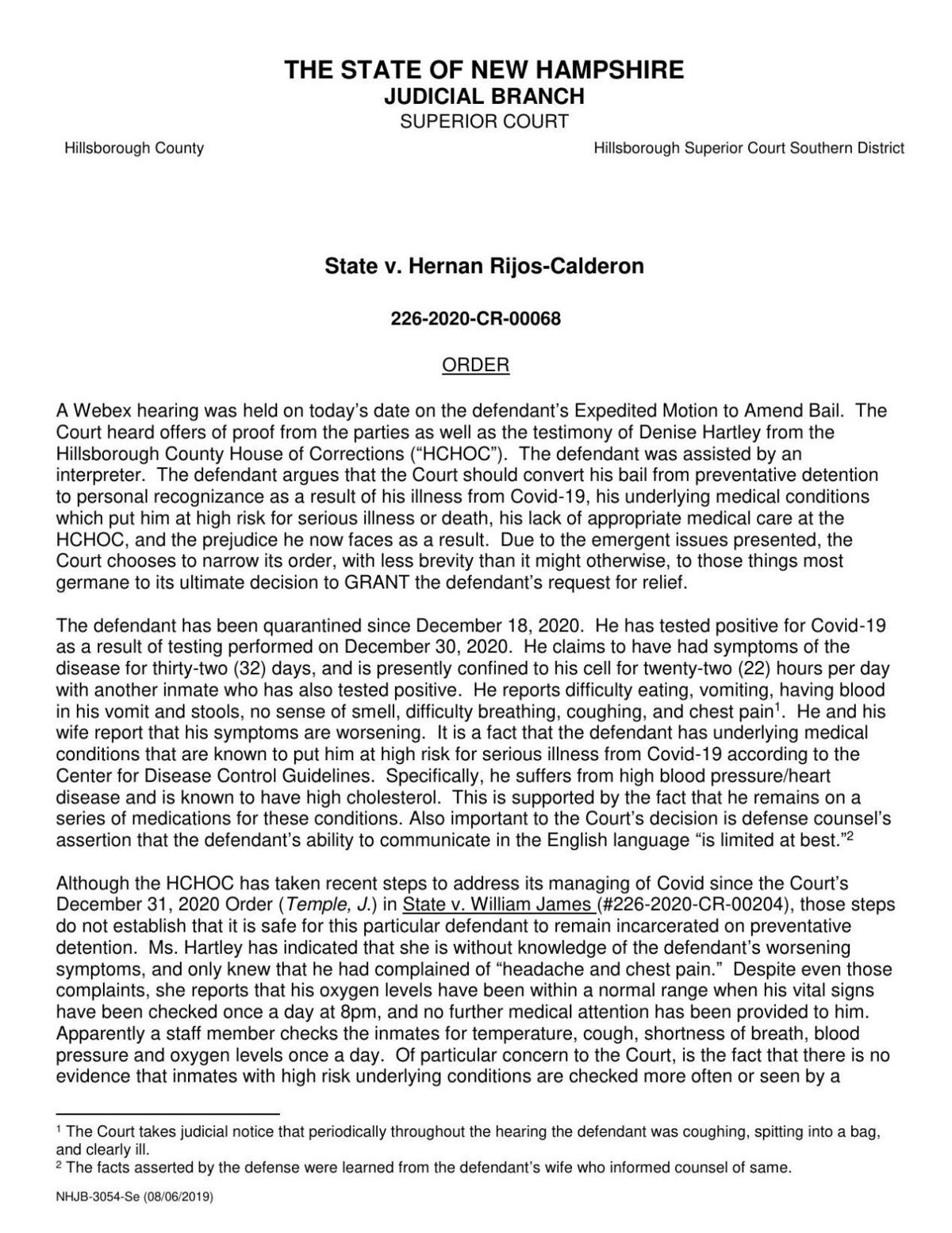 An email sent to jail Superintendent Willie Scurry on Tuesday morning was not returned. He is expected to give Hillsborough County commissioners an update on the jail when the board meets at 10 a.m. Wednesday.

Rijos-Calderon is facing five felony charges, including firing a gun into an occupied Nashua apartment and being a felon in possession of a firearm, and had been denied bail before.

“I think the judges are struggling,” said Jeffrey Odland, a Hopkinton defense lawyer who is a board member of the New Hampshire Association of Criminal Defense Lawyers. “These inmates may be facing a death sentence for lack of proper medical care.”

Odland said the latest ruling shows that the jail has no plan to identify and treat inmates at high risk for COVID-19 complications, and its response to the pandemic is reactive rather than proactive.

“That sort of reactive care is a recipe for disaster,” he said.

In early January, state health officials reported that 102 county jail inmates — slightly more than half of the population of 203 — were infected with COVID-19, as were 27 staff.

At the time Scurry said he was working with city and state health officials. Last Thursday, the state reported 104 inmate cases and 24 staff cases.

Also experiencing outbreaks were state prisons for men in Concord and Berlin and jails in Strafford and Merrimack counties.

On Jan. 11, Superior Court Judge Will Delker ordered Daniel Samaria released. Delker did not focus on Samaria’s medical condition. Rather, he noted that Samaria, who has COVID-19 and was under quarantine, was locked in his cell 22 hours a day.

The free time didn’t give him enough time to speak to his lawyer and prepare his self-defense case, Delker wrote.

“The jail’s lack of screening protocols and apparent lack of sanitization protocols related to the visiting attorney rooms make it risky for defense counsel to enter the jail in order to prepare their client’s defense,” the judge wrote.

Samaria must remain at his brother’s house and only leave to meet his lawyer or attend medical appointments.

T he past year has been tough on everyone, but for those on the front lines of the COVID-19 crisis, it’s been especially exhausting, both physically and emotionally.

A strong arms response: At mass vaccination site, burden of worry is lifted for thousands

With shots in their arms, some 4,000 newly immunized Granite Staters left the mass vaccination clinic in Loudon Saturday feeling a little lighter, worried a little less about their own safety amid the year-old pandemic.

WASHINGTON — Democrats in the U.S. Senate said Friday they had resolved their differences over unemployment aid in President Joe Biden’s $1.9 trillion COVID-19 aid bill, enabling them to move forward with the sweeping package after hours of delay.

Dartmouth College officials think the recent surge in COVID-19 cases, fueled partly by large, off-campus parties, is coming from a new strain of the coronavirus first detected in the United Kingdom.

Ashes in the mail: COVID changes the logistics of death

Ashes in the mail: COVID changes the logistics of death