A Superior Court judge ordered home confinement Thursday for a Valley Street jail inmate who caught COVID-19 there, noting a “cavalier attitude” toward the deadly disease at the facility.

The order came a day after a lengthy hearing that disclosed nearly non-existent testing for inmates, a high rate of infection among staff and practices that do not conform to state and federal guidelines.

“The court is deeply troubled by the cavalier attitude that (Hillsborough County House of Correction) had shown towards its inmates during the COVID-19 pandemic,” Temple wrote.

He noted that James has risk factors that put him at danger for complications. Testimony on Wednesday focused on his hepatitis C condition.

Temple noted that James was being held in a quarantine unit with incoming inmates. He warned they could become infected and spread the virus throughout the facility. 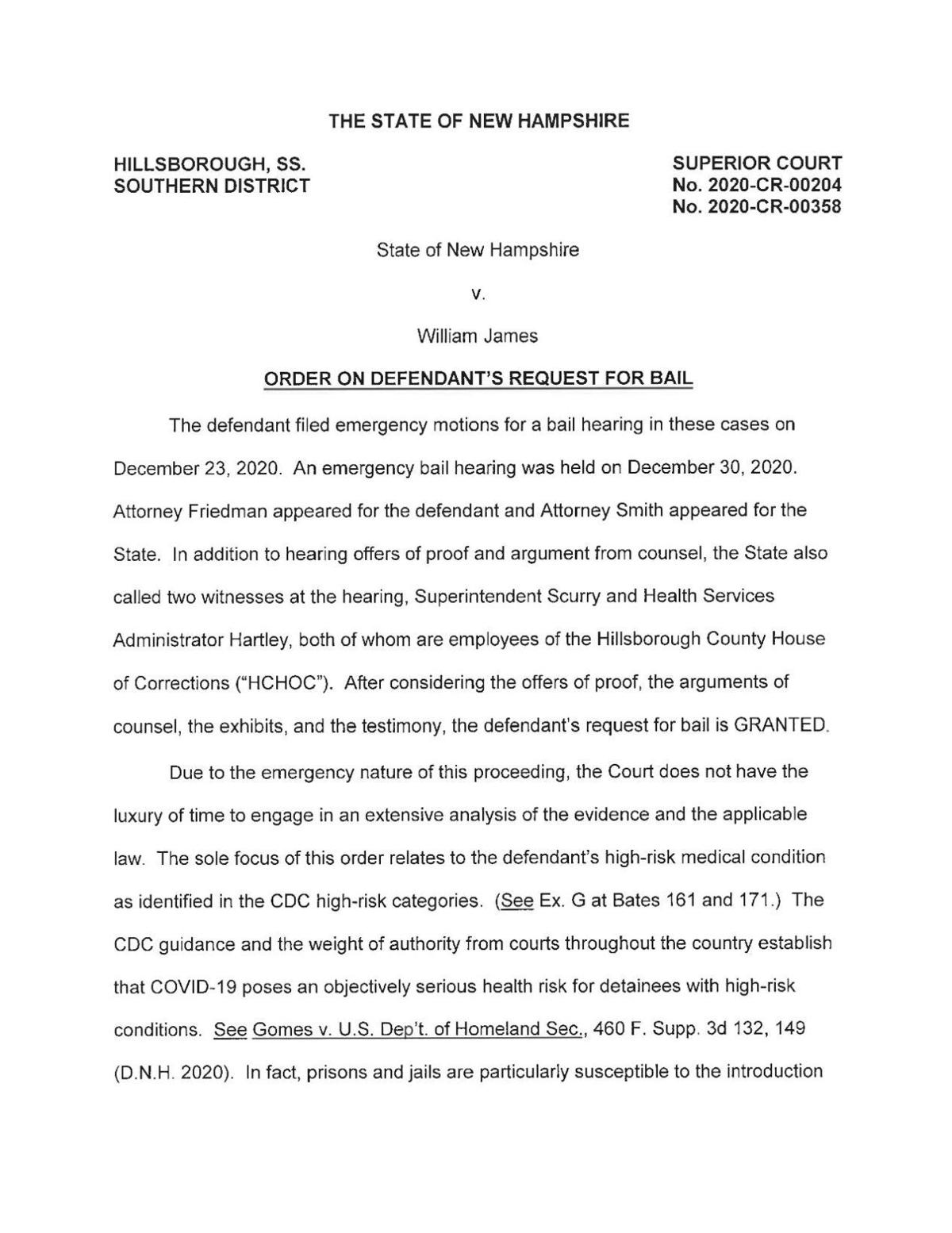 “Suffice it to say, that the deliberate indifference at this facility to the COVID-19 pandemic, particularly as it relates to high-risk inmates, is troubling at best,” Temple wrote.

For months, defense lawyers have complained about the jail and how it handles COVID-19. For example, in June public defenders offered to provide masks to the jail for use by inmates, and the jail refused.

The jail only provided masks in early November and did not mandate their use until Dec. 23. The following day, the ACLU-New Hampshire and veteran civil rights lawyer Larry Vogelman filed a letter with the jail demanding changes and threatening suit if the jail did not follow through.

James was ordered jailed following his arrest on stalking-related charges. Last week, his lawyer filed papers saying his client was suffering from COVID-like symptoms and asked for release to home confinement.

Then on Monday, public defender Elliot Friedman said his client had tested positive for COVID-19.

Under Temple’s order, James must stay with a relative and can only leave home for medical or legal reasons. Temple promised to send James back to jail if he makes any effort to contact the victim in the case.

On Wednesday, jail Superintendent Willie Scurry and health officials said tests were underway in at least one unit at the jail. Deputy City Health Director Philip Alexakos said the results of those tests should be available next week.

Among staff, 37 of 99 people tested have been positive; 22 were currently infected as of Wednesday, Scurry said.

He noted that McAfferty found a “tinderbox scenario” in jails and prisons. Four New Hampshire correctional facilities are experiencing outbreaks: the state prisons in Concord and Berlin and the Merrimack and Strafford county jails.

In his four-page order, Temple said that on multiple occasions Scurry was unaware of guidelines issued by the U.S. Centers for Disease Control of the state Department of Health and Human Services. Scurry took over the top job at the jail in late August.

“The court has no confidence that the defendant will receive appropriate treatment for the potential severe complications that could arise from his COVID-19 infection while incarcerated” at Valley Street, Temple wrote.

But he said that not every inmate suffering from COVID-19 should be granted bail, and jails and prisons in general have medical wards that can attend to the basic health care needs of inmates.

Twenty-two staff at the Valley Street jail currently have COVID-19, Jail Superintendent Willie Scurry said on Wednesday, the same day that the…

CONCORD — Restaurant industry leaders want the New Hampshire Legislature to take a preemptive move that could keep tipped employees from getting a windfall pay raise if Congress raises the federal minimum wage.

CONCORD — A state Senate committee wants to hear from Gov. Chris Sununu’s office as it considers whether to dramatically check the powers of a governor dealing with a future emergency.