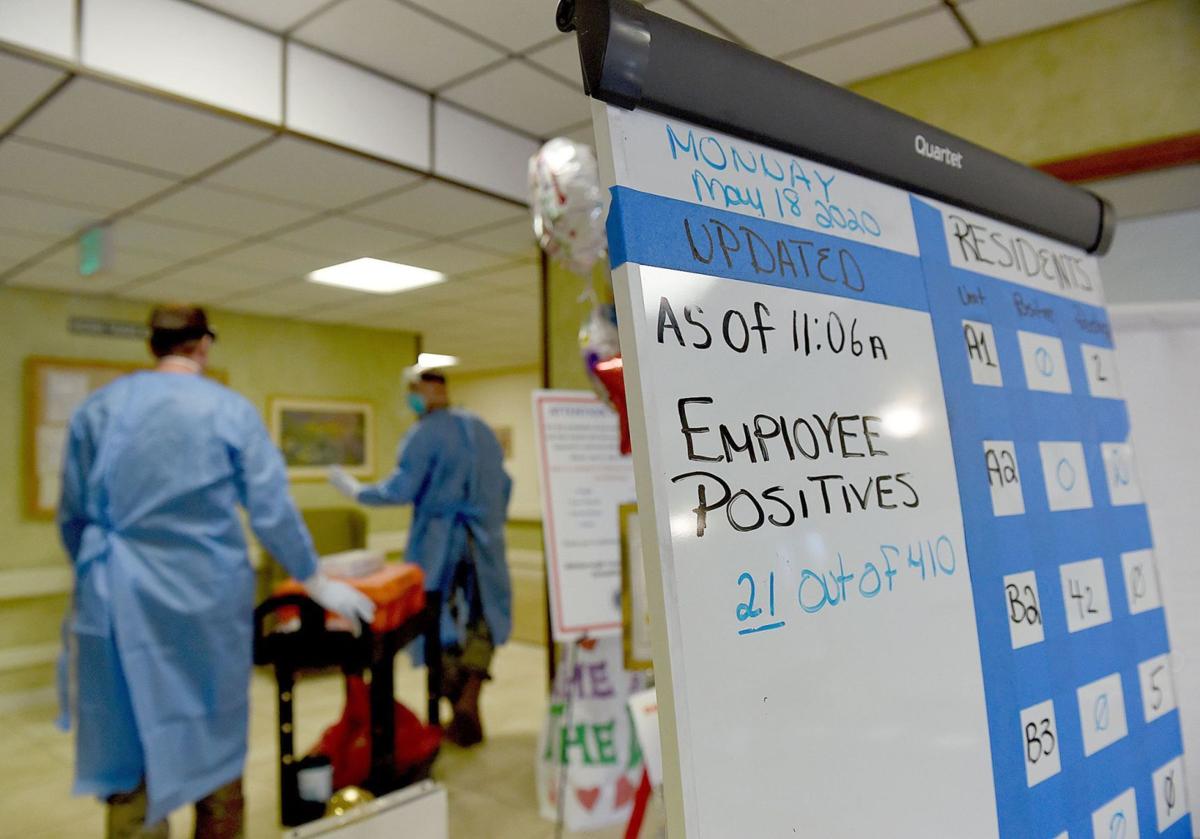 The number of employees (21) who have tested postitive for COVID-19 are updated on a board near the front desk at Hillsborough County Nursing Home in Goffstown on May 19, 2020. 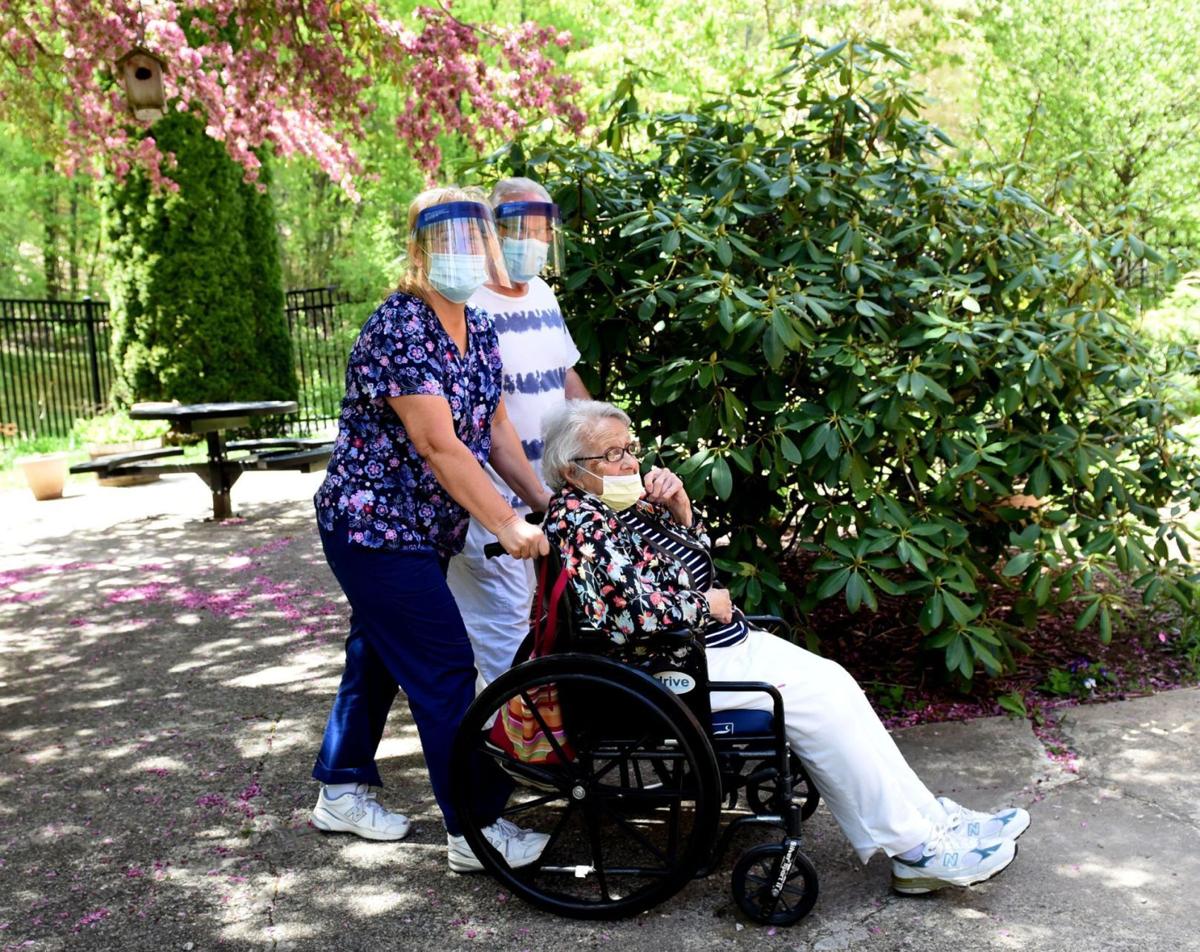 The number of employees (21) who have tested postitive for COVID-19 are updated on a board near the front desk at Hillsborough County Nursing Home in Goffstown on May 19, 2020.

One statistic from the COVID-19 pandemic makes New Hampshire stand out from all other states — the percentage of COVID-19 deaths in nursing homes and long-term care facilities.

Eighty percent of New Hampshire’s COVID-19 deaths — four of every five — have involved residents of long-term care facilities, according to state and federal data.

That percentage is twice the national average.

“Working in an environment like this, the COVID virus is always on people’s minds,” said Marlene Makowski, administrator at St. Joseph Residence nursing home in Manchester.

The U.S. Centers for Medicare and Medicaid Services consistently ranks New Hampshire nursing homes among the best in the country, according to Williams.

So why the high death rate?

“For one thing, we are an old state,” Williams said.

Before the Trump administration stopped tracking the data four years ago, New Hampshire’s nursing home population was the oldest in the country. Age is considered one of the biggest risk factors for serious complications associated with COVID-19.

If you live in New Hampshire and aren’t old, statistically you are more likely to be healthy, affluent and White — all factors that point to a lower likelihood of death or serious complications from the virus.

So with the number of deaths so low in the overall population, it could be expected to be higher in nursing homes, Williams said.

Jake Leon, spokesman for the state Department of Health and Human Services, cited another factor — rates of community transmission that, until recently, had been low, which kept the coronavirus away from the overall population for much of the year.

“As community transmission has steadily increased in the past few months, we are seeing the pandemic take its toll everywhere in the state,” Leon said.

In an email, Gov. Chris Sununu said, “While New Hampshire has not seen the level of devastation brought to most other states, this virus has ravaged long term care facilities across the Country — and NH is not immune.”

“One death is too many, and we will not stop fighting to protect our elderly who deserve the very best care,” he said.

Sununu spokesman Benjamin Vihstadt said Sununu acted quickly to address the threat to nursing homes, shutting down visitation when only seven cases of COVID-19 were confirmed.

According to the most recent state count, as of Tuesday 32 long-term care facilities were experiencing outbreaks among residents and staff. Another 49 outbreaks have run their course and been closed out by state officials.

The term “outbreak” specifically refers to situations where the virus is being transmitted between multiple clusters of three or more infected people.

One of the outbreaks occurred at St. Joseph, a small nursing home currently housing 22 retired nuns.

Eleven staff and 11 patients were infected. The home’s outbreak classification was lifted last Tuesday. No one died during the outbreak, but Makowski said they have lost a few residents to COVID-19.

“A lot of times, people forget we have a fragile population,” she said. “What people need to remember is to go into a nursing home you have to be frail and need care.”

Some of those who died at St. Joseph were well into their 90s and had asthma or lung disease. One resident embraced her end, saying she wanted to meet the God she had been praying to for years, Makowski said.

One of the biggest challenges was keeping staff. Makowski said she was in constant communication with nurses, nursing assistants, cooks, janitors and others asking about their home situations.

“We constantly, constantly played with the schedule,” she said. No one has quit, she said.

A $300 weekly bonus that Sununu instituted in April helped, but when that ran out some workers turned to New Hampshire Food Bank donations, she said.

Leon, of DHHS, said the state has inspected every nursing home and assisted living facility that has had an outbreak. State officials provide ongoing support, including weekly calls and follow-up inspections.

The state provides personal protective equipment on request, with same-day delivery if necessary. It also has provided the equivalent of 850 eight-hour shifts for facilities with staff shortages.

Nursing home residents and staff are included in Phase 1A of the COVID-19 vaccination plan, Leon said. That effort is up and running, with pharmacies providing vaccines to nursing homes.

“The vaccine will allow residents to resume their day-to-day lives,” Leon said.

But Williams said nursing homes will remain vulnerable until residents get the second dose of the vaccination, which he predicted won’t be until the end of February.

Nursing homes will remain at risk as community transmission soars in New Hampshire, Williams said. As of Thursday, state reported an 8.4% positive COVID-19 test rate over the past seven days.

“We are the Chernobyl of COVID-19 in New England at this point,” Williams said. He said the worst lies ahead, as people travel and gather over the holidays.

“Christmas and New Year’s Eve are just another debacle, and we’re going to pay the price for it,” he said.

New Hampshire has bucked most of its neighbors, with Sununu resisting the adoption of tougher restaurant restrictions, travel quarantines and limitations on gathering sizes.

“We are not at the point of mandating more economic contractions or pulling back,” Sununu said last week.

“It was about transparency and preventative action — for our seniors, for our veterans,” said former Democratic House Speaker Steve Shurtleff and state Sen. Dan Feltes in a recent Union Leader column.

In an email, Vihstadt, who said Sununu already had devoted $30 million in CARES Act money to nursing homes, characterized the legislation as an attempt by Democrats to pass an unworkable bill destined for veto.

An earlier version of this story incorrectly reported that Rosenwald's bill calls for a $25 million appropriate for a long-term care fund.

A group of Nashua parents whose children have been in fully remote learning since March 2020 are seeking to remove Board of Education members they claim are denying students the right to free and adequate education.

The first Martin Luther King Jr. Day since the start of a racial justice movement sparked by the death of Minneapolis man George Floyd will also be the first in recent memory where celebratory breakfasts, acts of service and other events won’t take place due to the coronavirus pandemic.

I ’m a COVID-19 testing technician.

When lawmakers met on the lacrosse field at the University of New Hampshire on Dec. 2, at least 61 state representatives ignored orders, ordinances and policies requiring them to wear facemasks, according to a Union Leader tally.