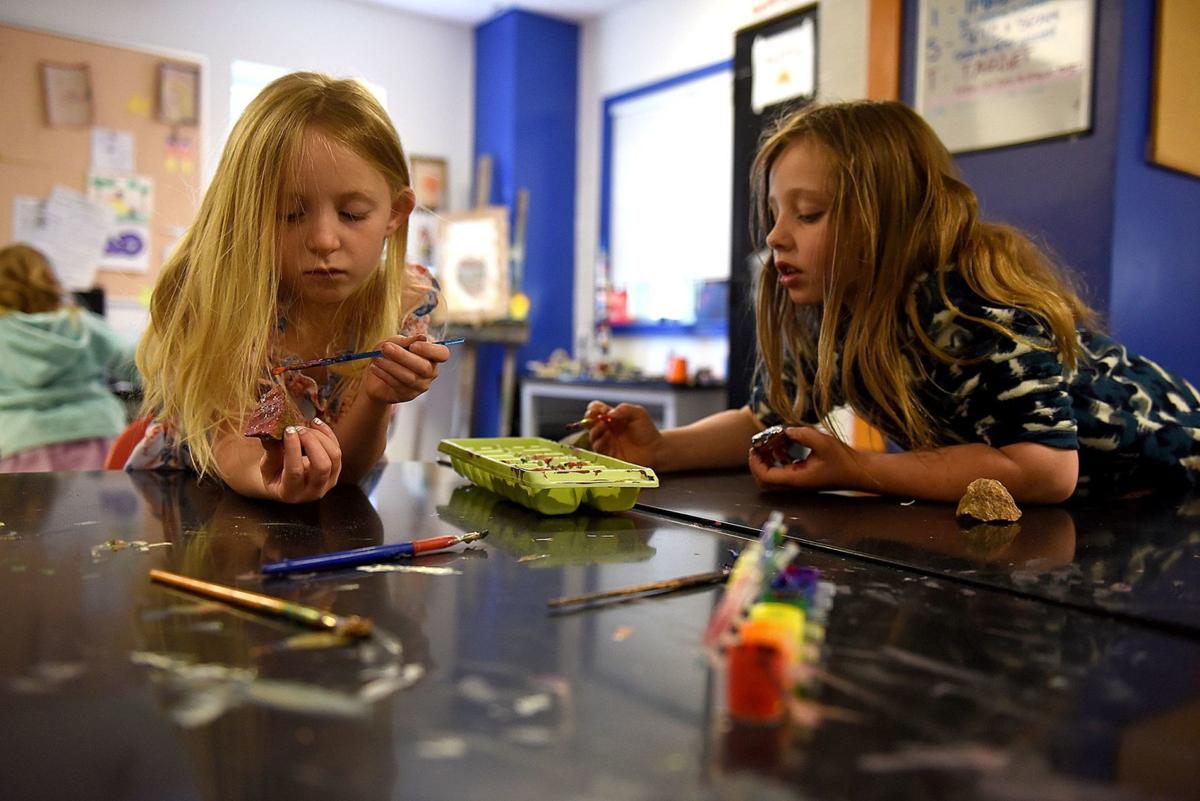 Cecelia Morton, left, and Kylianne Foote paint rocks at social distance daycare at the Boys & Girls Club in Concord on on May 13. 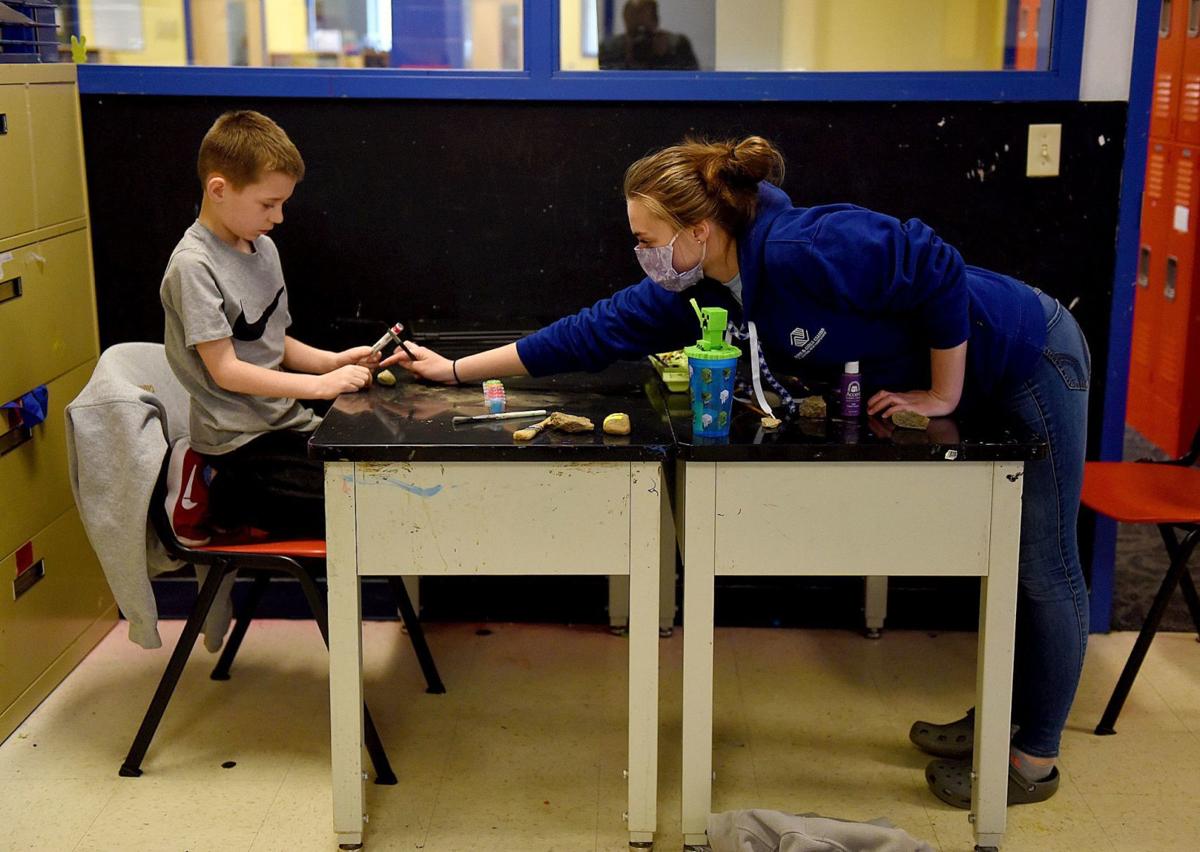 Daycare teacher Elisabeth Valley helps Kayden Blackler with his art project at social distance daycare at the Boys & Girls Club in Concord on May 13. 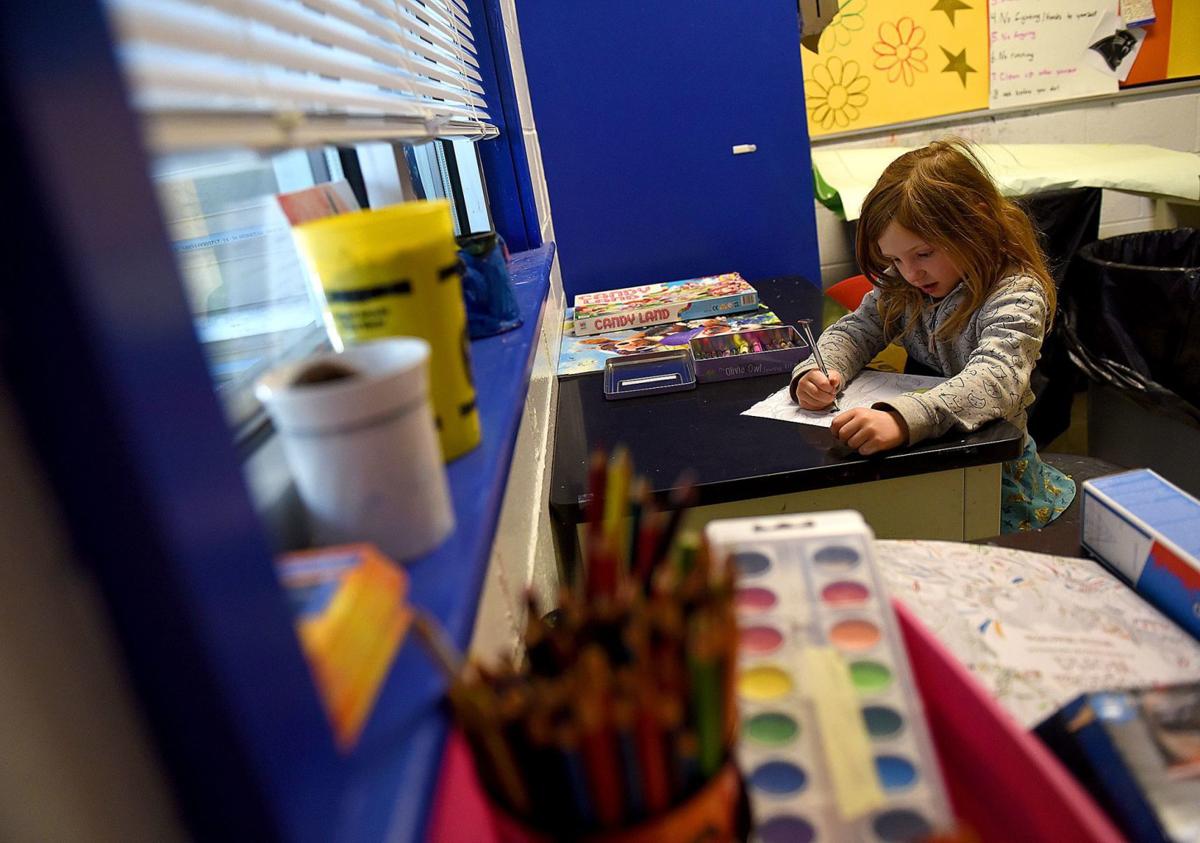 Savannah Foote colors in day care at the Boys & Girls Club in Concord on May 13. The club has been open under an emergency license to provide care for children of essential workers.

Cecelia Morton, left, and Kylianne Foote paint rocks at social distance daycare at the Boys & Girls Club in Concord on on May 13.

Daycare teacher Elisabeth Valley helps Kayden Blackler with his art project at social distance daycare at the Boys & Girls Club in Concord on May 13.

Savannah Foote colors in day care at the Boys & Girls Club in Concord on May 13. The club has been open under an emergency license to provide care for children of essential workers.

Child care providers hope the state will revise guidelines around reopening day care facilities, saying the current rules will hurt their businesses, and their ability to take in the children of working parents.

Guidelines announced Monday would limit groups to no more than 10 people including adults, with little contact between groups to reduce the spread of COVID-19. The 10-person limit is consistent with a ban on gatherings of more than 10 that still applies under New Hampshire’s stay-home order.

But day care providers say this will force them to turn away clients, and could stymie other businesses’ reopening.

“Everybody in the industry understands public safety has to come first, but there has to be some bending and flexing,” said Lisa Schroder, who owns the Alpha-Bits Learning Centers in Manchester. “Having 10 to a room really limits the availability to have work opening up.”

Schroder said her two centers would have to turn away as many as 250 of the children she and her staff cared for before the pandemic if the cap on 10 people per room stays in place.

Child care providers contacted Gov. Chris Sununu’s office with concerns. Sununu said Wednesday he would ask the state to re-evaluate the guidelines. Those guidelines include the cap on how many people can be in a room at once, and requirements that staff wear masks at all times and keep children six feet apart during meals.

“We will do our very best to keep them six feet apart, but it’s just not going to happen,” said Nicole Lamarche, co-owner of the Learning Tree in Londonderry. “They’ve been secluded like us for 11-plus weeks,” she said.

Kay Garber, who owns Early Beginnings in Merrimack, said masks were already proving to be a problem.

“You should have seen our kids today. They were petrified,” Garber said Wednesday, the first day her staff wore surgical masks. Garber said they had to pull the masks down to their chins, to show the children they were not strangers. “Which defeats the purpose,” Garber said.

Garber said she has a compromised immune system, but feels safe in the day care center because of the safety measures she and her staff have in place.

Lamarche said she and many other child care providers who remained open through the pandemic have been doing drop-offs and pick-ups outside. They have been checking children’s temperatures as they come in, and asking parents about possible exposure to the coronavirus.

“We have the ability in child care to really closely monitor these children, and make sure we’re mitigating these risks the best we can,” Lamarche said.

So far, none of the nearly 300 New Hampshire day care centers now open under emergency licenses has been linked to COVID-19 outbreaks. Several providers pointed out the 10-person-per-room limit is not part of the emergency child care license.

Emond said he understood the strain put on child care centers, with the Boys and Girls Club limiting groups to eight children and two adults.

“Our capacity at our main facility on Concord went from 200 to 50. Clearly the budget was based off 200, not 50,” Emond said. “And every child care is faced with the same conundrum.”

He hoped the $25 million in federal CARES Act money Sununu has designated for child care centers will help the facilities survive — though he said they will likely face some losses.

But other providers said they worried about how some child care businesses would survive. There was a child care shortage in New Hampshire before the pandemic, and the shortage seems likely to get worse as some child cares choose not to reopen.

“Every day care is taking a hit,” Schroder said. She said some child care providers will have to close if the state and providers cannot reach a compromise. “Ten per room, that’s just not a number anyone can work with.”

CONCORD — Of 149 new COVID-19 cases reported by the state Wednesday, an “unimaginable” number of them were at the Villa Crest Retirement and N…

After Rosie Dinan gets off her 12-hour night shift as a nurse at Catholic Medical Center’s intensive care unit, she comes home to be mom, play…

As the state starts to reopen, day care centers and organizations such as the Boys & Girls Club are preparing to care for the children of …

HOLDERNESS — The shores of Squam Lake will be a little quieter this summer, now that the oldest family camp on its shores won’t be opening for the season.

Sununu: Economy will start to 'surge' this fall

CONCORD — New Hampshire’s economy will begin to move forward in September and October but not rebound fully until there’s a vaccine for COVID-19, Gov. Chris Sununu said Wednesday.

CONCORD — Partisan disputes before a key House committee Wednesday demonstrated the increasing likelihood that the 2020 legislative session could end abruptly this month.

Pig races, corn dogs, cotton candy and roller coasters will have to wait as more communities are canceling fairs in response to the COVID-19 pandemic.