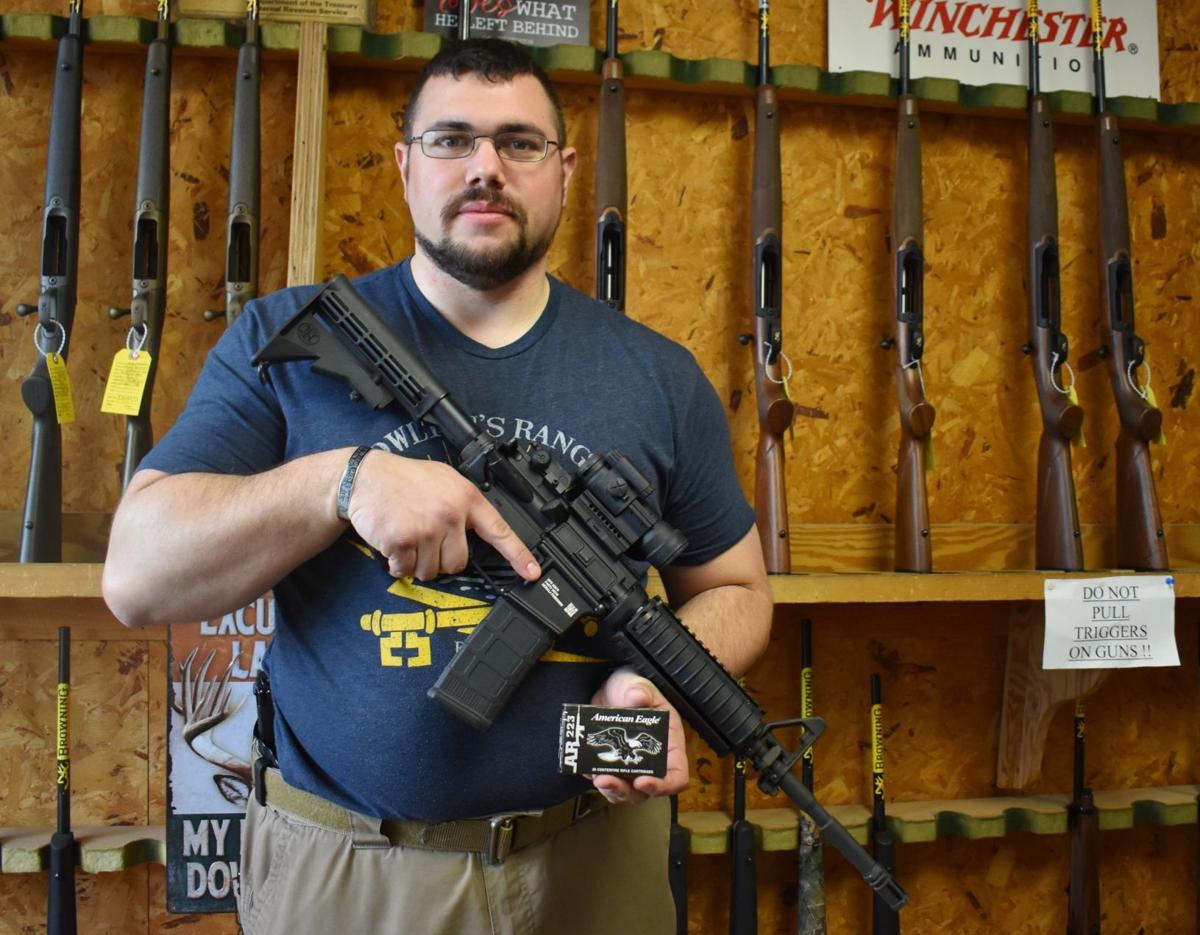 Joshua D’Agnese, owner of The Village Gun Store in Whitefield, poses on Thursday with an AR15 and a box of .223-caliber ammunition, both of which are in short supply at his business. 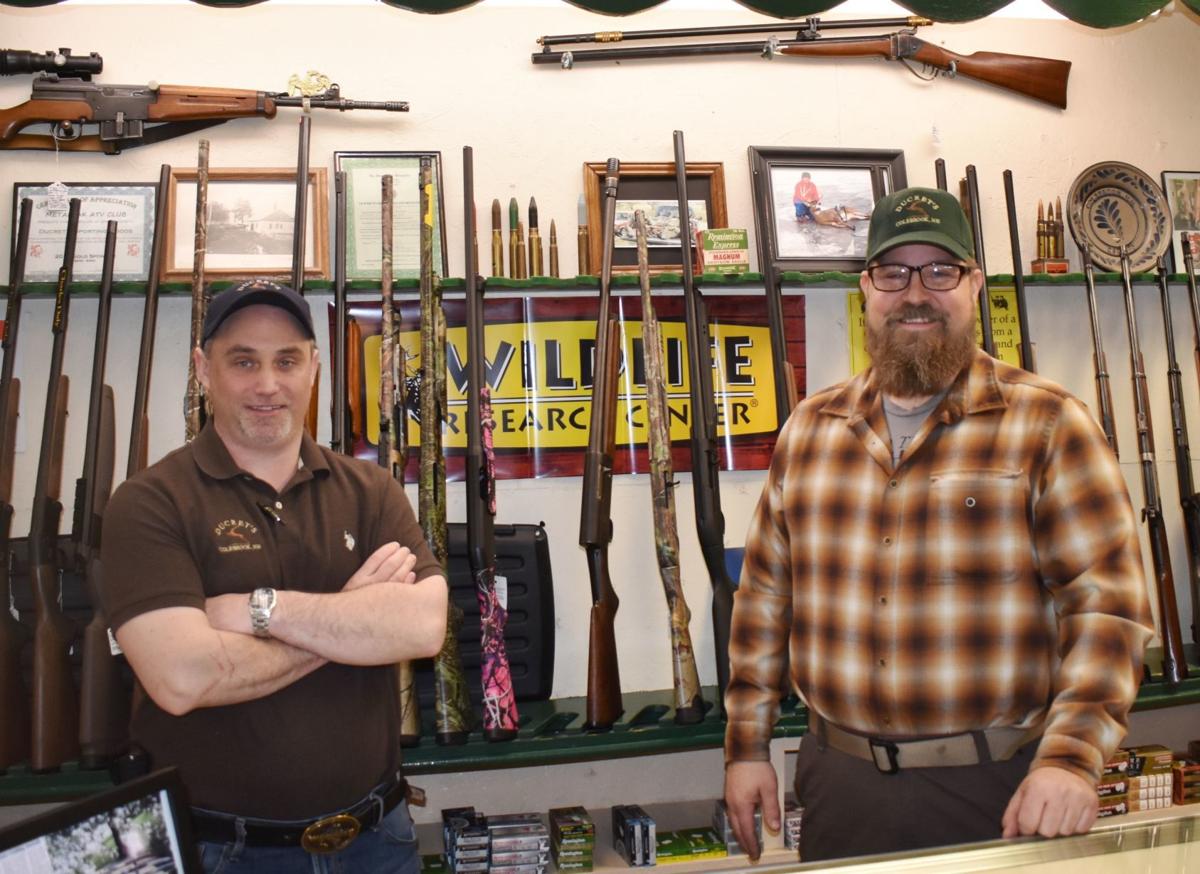 Brian Pariseau, left, owner of Ducret’s Sporting Goods in Colebrook, and employee Jay Wasylyna pose in the store on Thursday. The men said there has been an increase in sales since the coronavirus pandemic began.

WHITEFIELD — Some gun and ammo dealers in the North Country have reported increased sales amidst the ongoing coronavirus pandemic.

The dealers said concerns about the coronavirus appear responsible for some increases, but added that this is the time of year — early spring — when sportsmen start getting back to the outdoors to target shoot or get ready for the turkey hunting season which starts May 1.

Joshua D’Agnese, who has owned The Village Gun Store in downtown Whitefield for five years, on Thursday said there has been less “panic buying” due to the coronavirus than there has been after mass-murder shootings and political changes.

The two latter situations created fears about the erosion of the Second Amendment, he said, and in particular about restrictions on or the banning of certain firearms, such as assault rifles.

Having attended a conference last summer put on by the Bureau of Alcohol, Tobacco, Firearms and Explosives, D’Agnese said he learned that there’s “a plethora” of assault rifles, some 100 million, in private hands.

He said his store was running low on many calibers of ammunition, adding that he rationed it to give as many customers as possible a chance to buy it.

D’Agnese, who served 12 years in the U.S. Army, said when he and his fellow military veterans — all of whom were trained to assess risk — discuss the coronavirus, they come to the conclusion that some people “are overreacting.”

The country, he said, has a pro-Second Amendment president, and New Hampshire has a like-minded governor.

Still, that overreaction has been good for business.

On March 14, D’Agnese said his store was “standing-room only” with potential buyers, while the next day, a man bought ammunition cumulatively worth $3,000, which he paid for in cash. Background checks with state police for handgun purchases, he observed, were taking up to four hours to complete.

Brian Pariseau, who owns Ducret’s Sporting Goods in Colebrook, on Thursday agreed with D’Agnese that more people have been buying firearms and ammunition from his business since the outbreak of the coronavirus.

Sales of ammunition have been good, he said, “but the ammo is hard to come by.” Pariseau has rationed it when necessary.

He attributed the demand for ammunition to: the change in seasons; the fact that many people are getting their income-tax refunds now and want to buy guns; and, in part, to the coronavirus.

Pariseau thinks social media has flamed fears and contributed to some people acting “irrationally” in terms of hoarding certain items.

Jay Wasylyna, who works at Ducret’s, said most customers have “a decent attitude and they’re not panicking.”

“We’re not being shot at; there’s no reason to panic,” said Wasylyna, who is a veteran and is encouraging customers “to spread accurate information” about the strong response by the federal and state governments to the pandemic.

13 new COVID-19 cases in NH, including first in Sullivan County

The number of reports of child abuse have been halved since New Hampshire closed schools and started practicing in social distancing, according to alarmed child advocacy groups.

CONCORD -- Some of the federal money for battling COVID-19 should be used to create a fund to support front-line workers and make direct payments to help citizens with their expenses, Senate Majority Leader Dan Feltes said.

BEIJING/HONG KONG (Reuters) - Beijing is stepping up its oversight of exports of coronavirus test kits after several European countries complained about the accuracy of some Chinese-made tests.

SNHU staggering times for students to retrieve belongings from dorms

SNHU staggering times for students to retrieve belongings from dorms