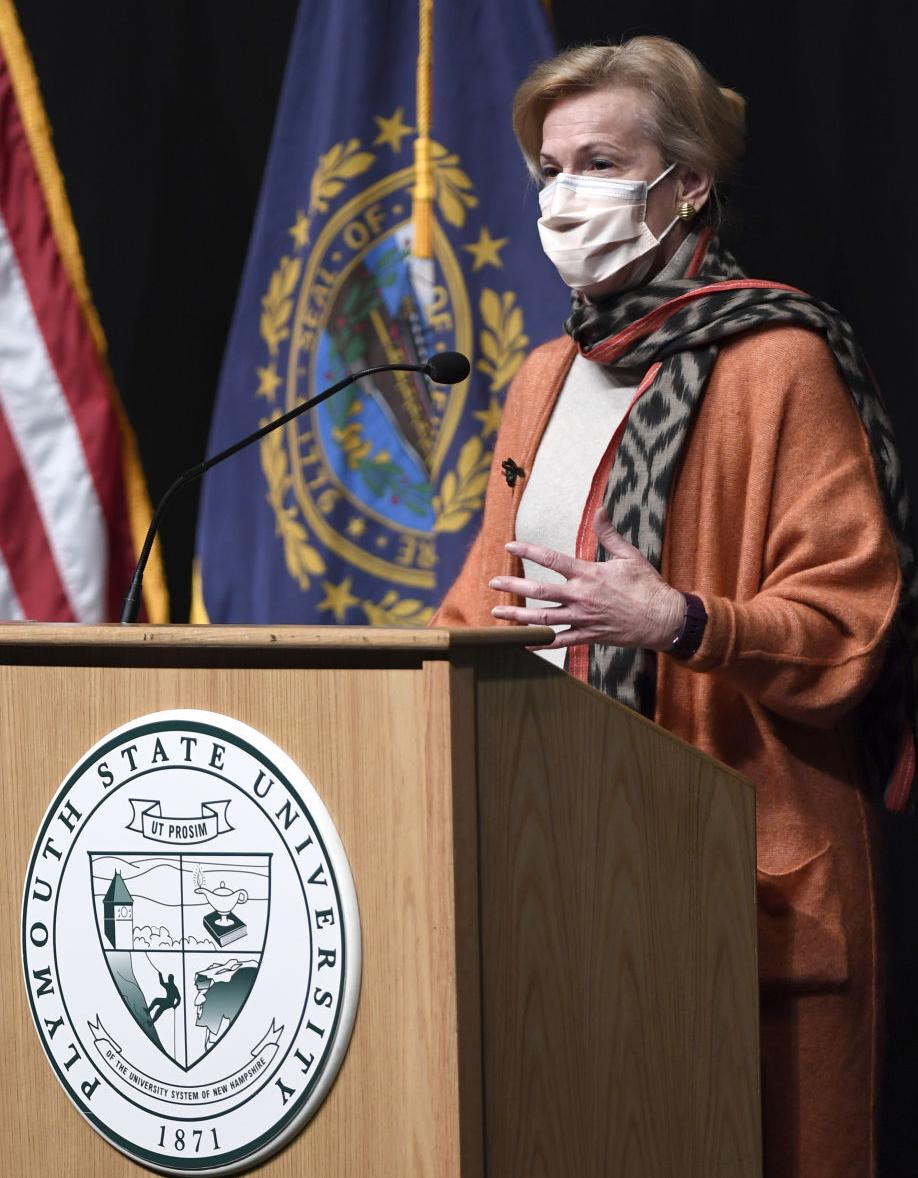 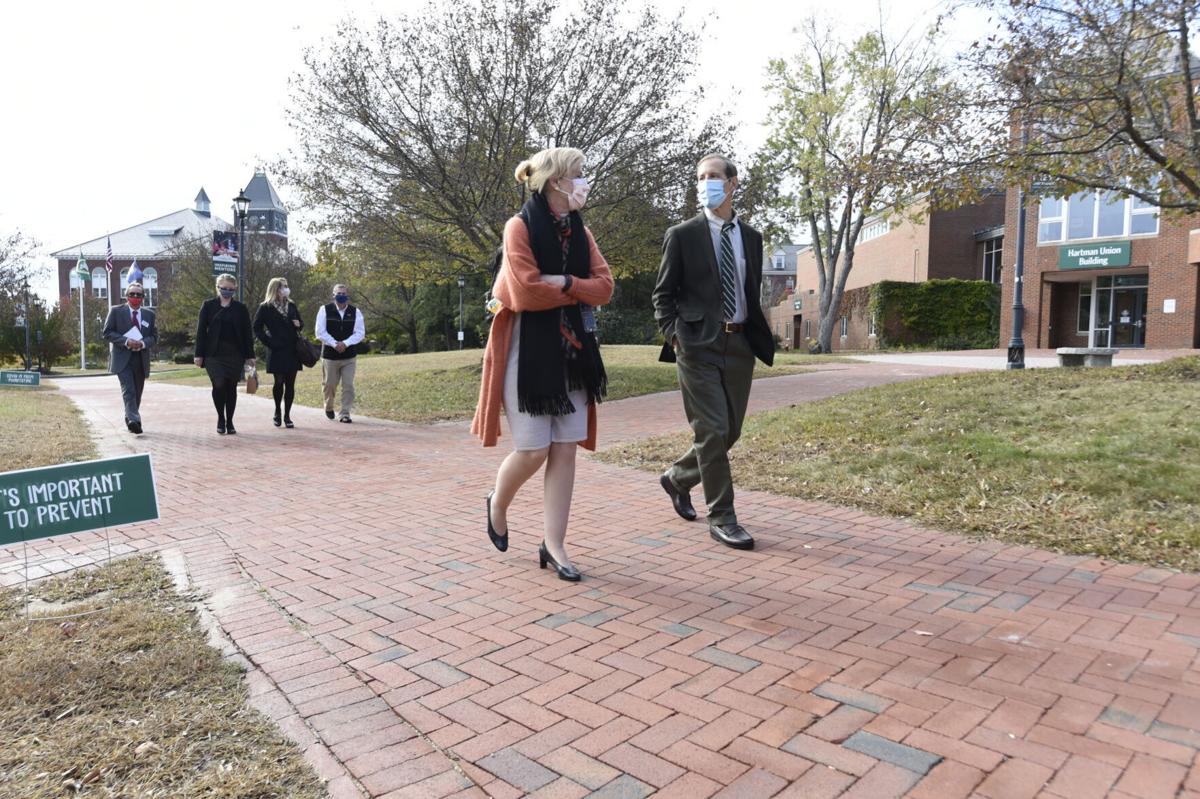 PLYMOUTH — New Hampshire has seen the “early warning signs” of a surge in COVID-19 cases, and residents should model the behavior of the state’s college students, who have kept the virus in check on campus, says the coordinator of the national response to the pandemic.

If not, Dr. Deborah Birx said Monday, the Granite State could end up replicating the rise of virus cases seen in the past month in rural areas of Montana, the Dakotas, Wyoming and Wisconsin.

“It is an example of people letting down their guard and getting comfortable,” said Birx, the U.S. coronavirus response coordinator.

New Hampshire is the 37th state and Plymouth State University the 27th college campus Birx has visited since she took her COVID-19 awareness campaign on the road in June.

The number of COVID-19 cases has gone up in recent weeks in part because the amount of testing has doubled or tripled as colleges and public schools have reopened.

But New Hampshire’s daily rate of positive test results has remained low, at about 1%.

Still, Birx said an increase in that positivity rate of even 0.1% can increase community transmission of the disease, which can quickly multiply as those without symptoms get together in greater numbers indoors.

“These are the early warning signs. Even in places like New Hampshire, you can see dramatic, escalating spread because of silent transmission,” Birx said.

Over the Columbus Day weekend and while traveling by car from the University of Vermont, Birx said she came across many parties or weddings where people were not wearing masks, and she drove by parking lots jammed by leaf-peeping tourists.

“Even though you are a Live Free or Die state, we have seen that attitude across America. This is really a call to action for every American. If you are moving indoors, don’t bring others with you, and if you do, make sure you are distancing one another,” Birx said.

Birx’ older brother, Donald, is president of PSU, and the pair toured the college’s COVID testing center housed in the ALLWell North complex.

“Over the past eight months, not only has Deb been a trusted resource for the nation, but she’s been a sounding board for me, PSU and the entire University System as we planned for the reopening of campus and the continuation of in-person classes throughout the semester,” President Birx said. “She has given us advice and shared perspectives that have given us the confidence to move forward.”

Since reopening the campus to students Aug. 24, PSU has had 18 cases of the virus. Only one was active on Monday.

Birx and her brother toured the Draper and Maynard Makerspace, PSU’s state-of-the-art facility that produces personal protective equipment for first responders, and visited with members of the Marketing Association of Plymouth State (MAPS), a student organization that produced and distributed more than 2,000 free masks to the college community.

Kate Caron, PSU director of environmental health and safety, said the school is averaging about 3,400 to 3,600 tests a week for all students and staff.

Next week, the college will have its own lab that can analyze 300 tests a week and allow it to do follow-up surveillance testing, she said.

Birx praised the testing regimen for the state’s public higher education system. Later Monday, she visited the University of New Hampshire’s Durham’s campus where its testing hub is housed.

“Plymouth State University has shown you can bring students back onto campus and stay relatively COVID-19 free if students and staff practice safe behavior,” Birx said.

“We all have to act in a much more responsible way. You have learned from here. Help us carry that message into communities and in the everyday walk of life.”

A member of PSU’s Student Senate who only gave his first name praised Dr. Birx as a “voice of reason” in the Trump administration. But he warned there have been risky gatherings at the college.

“I know for a fact there are very large gatherings going on campus, 50 to 75 to 100 people-plus in basements,” he said, referring to them as “speak-easy parties.”

“Is it just pure luck the cases have been so low?”

Dr. Birx said there may have been no outbreaks from such events because the presence of the virus is so low in town.

But that could easily change, if students engage with the public at large and bring the virus back onto campus, she said.

“So turn people in anonymously so the staff can work to decrease that behavior,” Birx said. “The problem is the next case. It won’t be one or two. It will be 25 or 50, and then you are quarantining 300 people.”

City aldermen will consider leasing out the JFK Memorial Coliseum ice arena on Beech Street for use as a homeless shelter during the winter months at a special meeting Tuesday night.

CONCORD — As a few dozen advocates honked their car and truck horns in support of battling COVID-19 Monday afternoon, New Hampshire Poor People’s Campaign Co-Chairman Deborah Opramolla of Rindge kept her focus on her disabled son and the need for health care providers to make standards of ca…

As COVID-19 cases surge across New Hampshire, leading to increases in the number of hospitalizations and deaths related to the virus, officials with major health organizations in the state issued statements Monday urging residents to wear masks to slow the spread of the deadly disease.