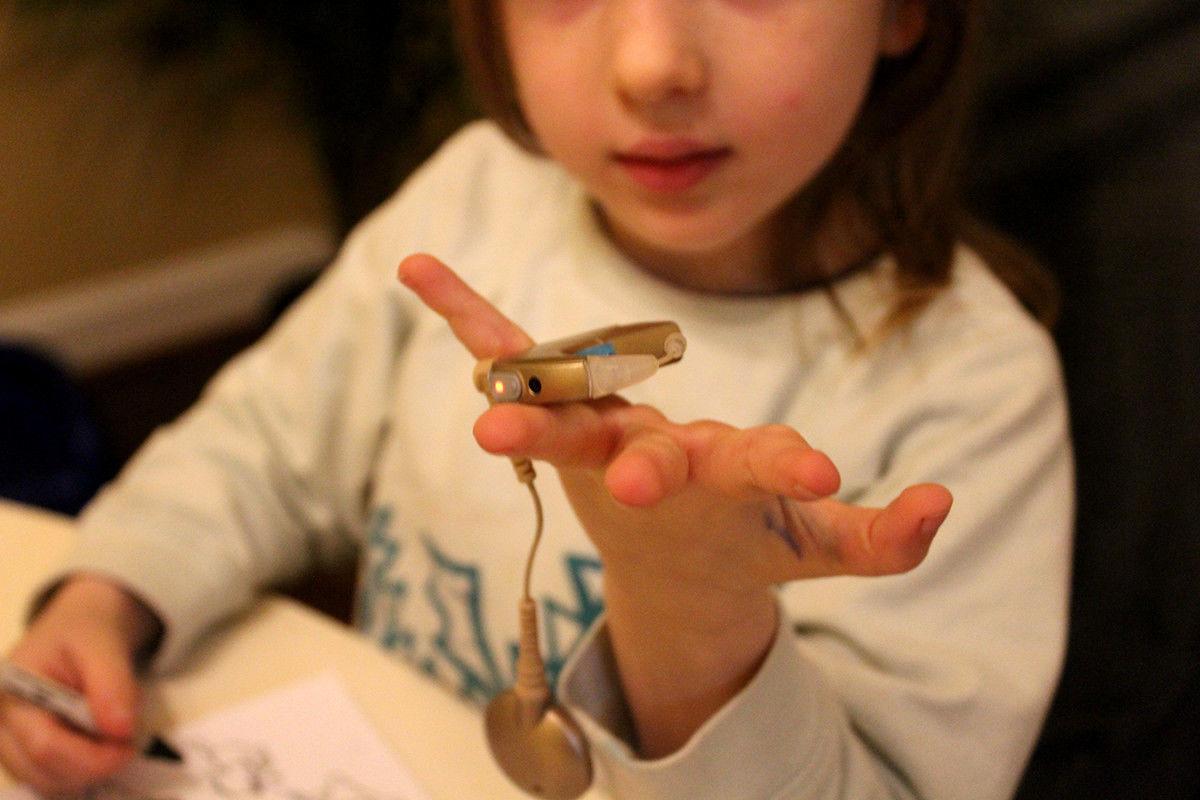 Betty Schottler holds up part of her cochlear implant. 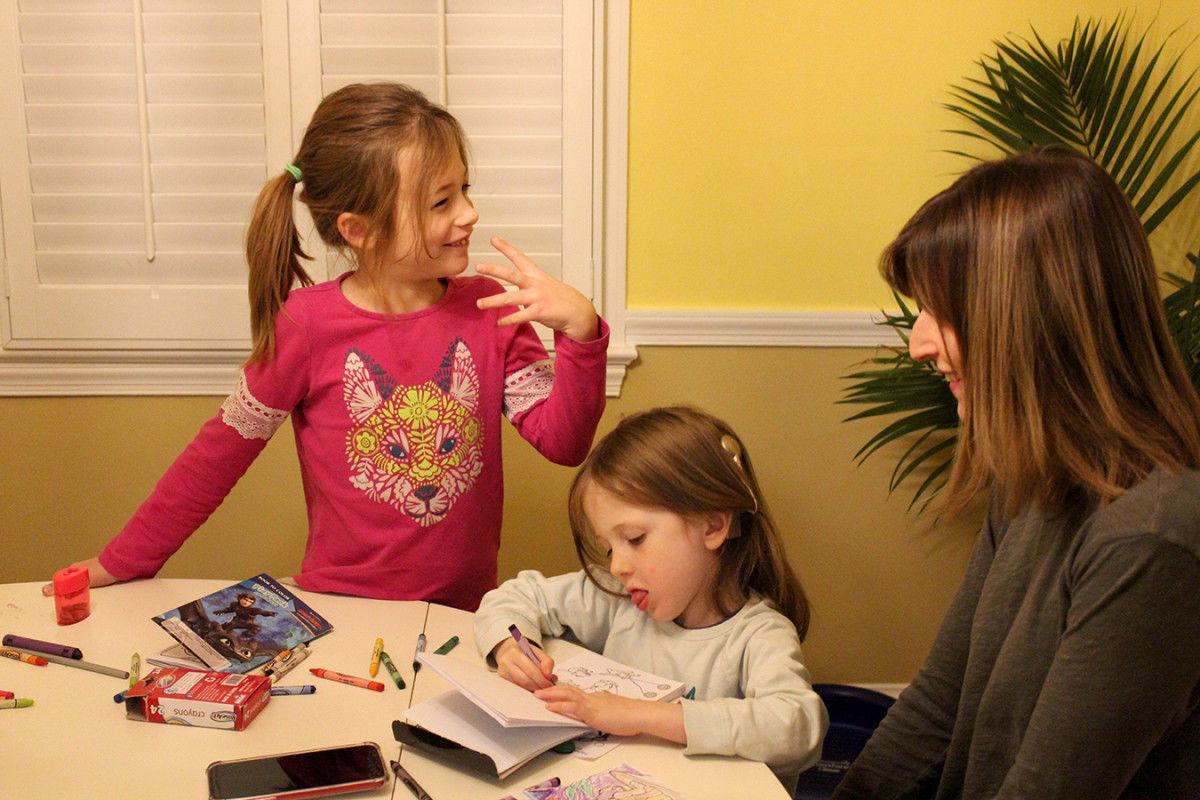 Betty Schottler, center, was born with profound hearing loss. In the early days, it took Betty’s big sister, Ellie, left, banging on a toy drum to capture the newborn’s attention. Now Betty hears with the help of a cochlear implant. At right is Jen Schottler, Betty’s mom. 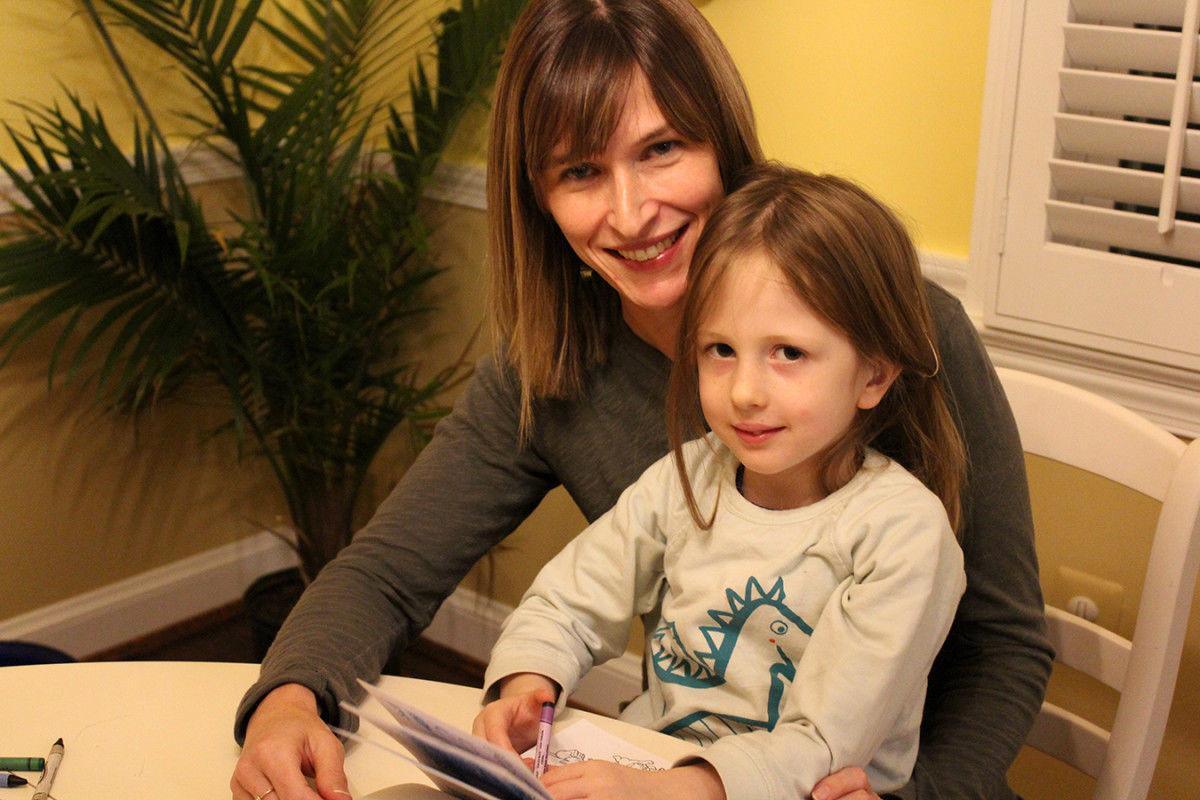 Betty Schottler sits with her mom, Jen Schottler, at their home in Arlington, Va. Betty was born with profound hearing loss and later received a cochlear implant to help with hearing and spoken-language development.

Her mom makes the sounds first, then Betty repeats them to check that her cochlear implant is working.

Betty was born profoundly deaf and got her first set of glittery rainbow hearing aids at 6 weeks old. Then, before her first birthday, she had surgery to place a cochlear implant in the bone behind her ear. The device sends signals to the brain, and the brain recognizes those signals as sound.

For Betty and thousands of children born in the United States with hearing impairment, newborn screening is the first step toward introducing them to the world of sound.

Most babies in the U.S. get screened in the first few days after birth; in 2016, up to 98% of newborns were tested, according to the Centers for Disease Control and Prevention.

Typically, a hearing screener comes to the mother’s bedside and tests the baby in the bassinet. It works best when the child and the environment are quiet.

“A lot of times we swaddle the baby so that the baby is comfortable and can sleep, put the probe in the ear and that test doesn’t take more than five to seven minutes per ear,” said Irene Sideris, a pediatric audiologist with Children’s National Hospital, which is based in Washington, D.C.

The tiny probe looks like an earbud or infant thermometer. It emits a low clicking noise, which stimulates tiny hairs in the baby’s inner ear and makes them vibrate. The test measures the echoes from those vibrations, or otoacoustic emissions.

Most babies pass the testing, and that’s the end of it.

Others newborns get “referred,” meaning the doctor recommends they be screened again as soon as possible, usually within days or weeks.

“They told us that she ‘referred.’ They say referred instead of ‘fail,’” said Betty’s mom, Jen Schottler.

Sideris said a baby might not pass the initial hearing screening for many reasons, including residual fluid or debris in the ears.

The CDC estimates 1.7% of babies were referred for additional screening in 2016.

Three in 1,000 infants are born with hearing loss, according to the American Academy of Pediatrics.

“Newborns get screenings for a million things, and it’s one of them,” Schottler said. “I just remember receiving the piece of paper with the results and the list of audiologists to reach out to.”

Follow-up tests showed that Betty had profound hearing loss and was, therefore, a candidate for the cochlear implant. Trained as a speech pathologist, Schottler knew that if she wanted Betty to start hearing and learning spoken language, the clock was ticking.

Other parents choose to have their child learn sign language or other ways of communicating.

In 2000, the federal government set a goal to have all children screened in the first month of life and to have kids with hearing loss identified and diagnosed by their third month. The government’s goal is to get kids enrolled in early intervention programs by the time they’re 6 months old.

Before screenings were so universal, Sideris said, parents often did not realize their child had problems hearing until age 2 or 3.

“At that point, the child has already lost two years of speech-language learning time,” Sideris said.

Those years are critical, she said, because a child’s brain still has plasticity. If the neurons usually used for hearing and processing spoken language aren’t activated within this window, they’ll be used for something else.

For parents who want their kids exposed to sound, experts say early intervention is urgent.

“That doesn’t mean that if you are 4, 5 or 10 and you have a hearing loss that you would not benefit from hearing aids,” Sideris said. “But the earlier that you are identified, the easier it is.”

The Schottlers, who live in Arlington, Va., connected with a local parent-infant education program and borrowed hearing aids for baby Betty before she got her cochlear implants. Other children may use hearing aids for their entire lives and need those devices replaced as they grow.

Early intervention was a family affair for the Schottlers. Speech therapists came to the Schottlers’ home to teach the family how to help Betty start acquiring spoken-language skills.

In the beginning, Jen and her husband, Brian, did all sorts of things to draw Betty’s attention to sounds. They’d look for subtle indicators — like a blink or a raised eyebrow — signifying she had registered the noise. In the early days, it took Betty’s big sister, Ellie, banging on a toy drum to capture the newborn’s attention.

Later, she would react even when a drop of water sizzled softly on the coffee maker’s hot plate.

Today, Betty loves to color — especially with purple crayons. She’s already reading some of Ellie’s books from kindergarten. She’s a preschooler with plenty to say.