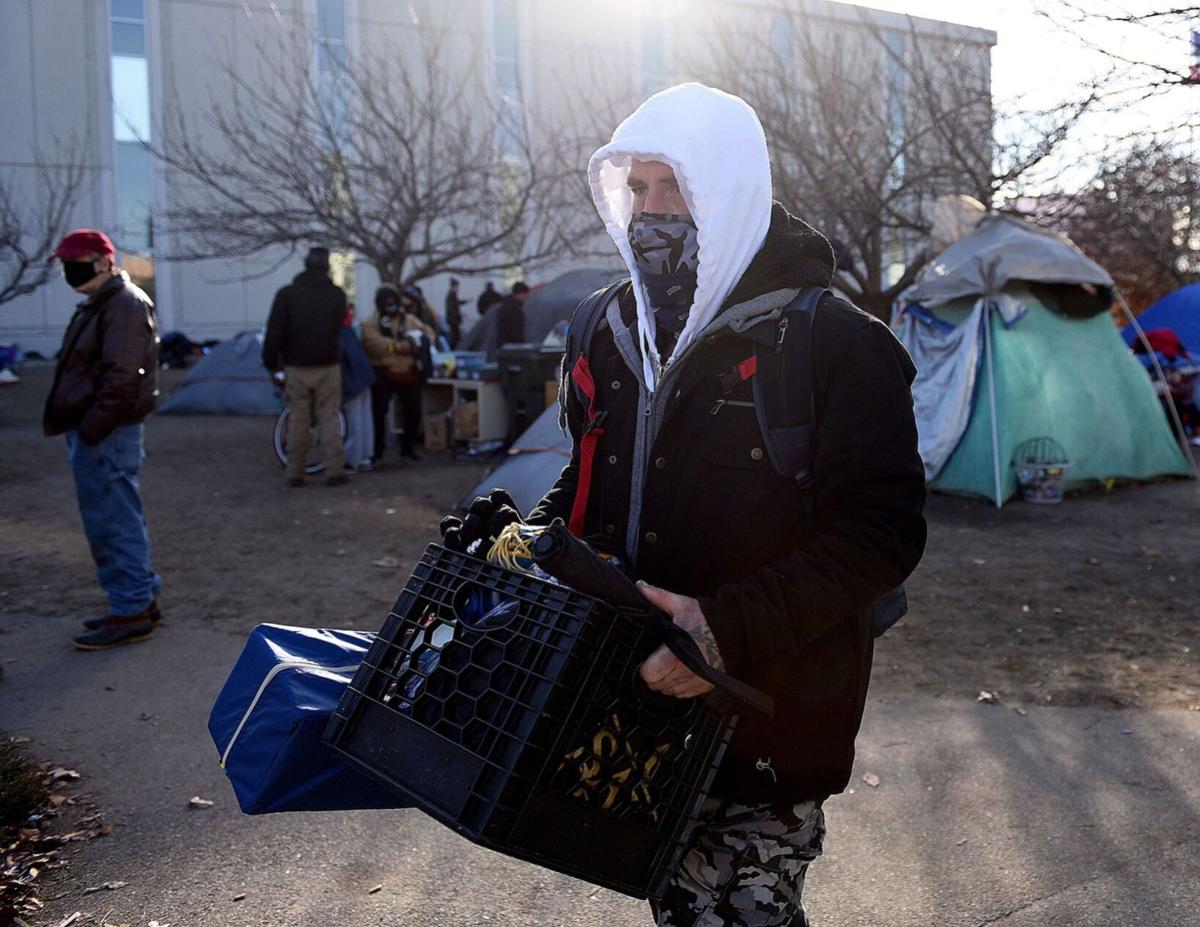 Nick Hoffman carries his belongings to a van waiting to take him to a recovery center on Nov. 19, 2020. Hoffman has been living in a tent on the lawn of the Hillsborough County Superior Court in Manchester. 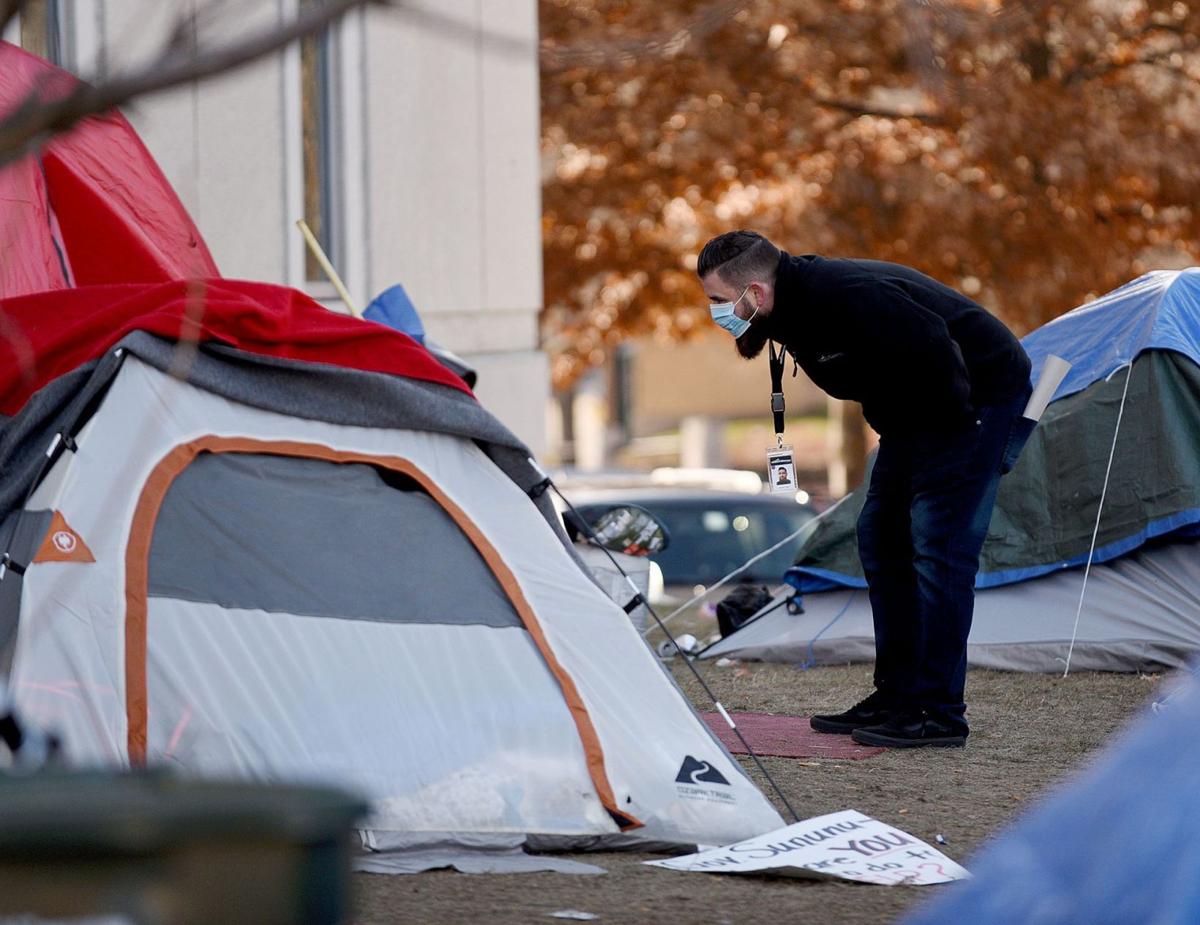 Justin Lever of Granite Recovery Center speaks with a homeless person living in a tent on the lawn of the Hillsborough County courthouse in Manchester on Thursday. Lever is with a team of recovery specialists moving people to recovery centers. 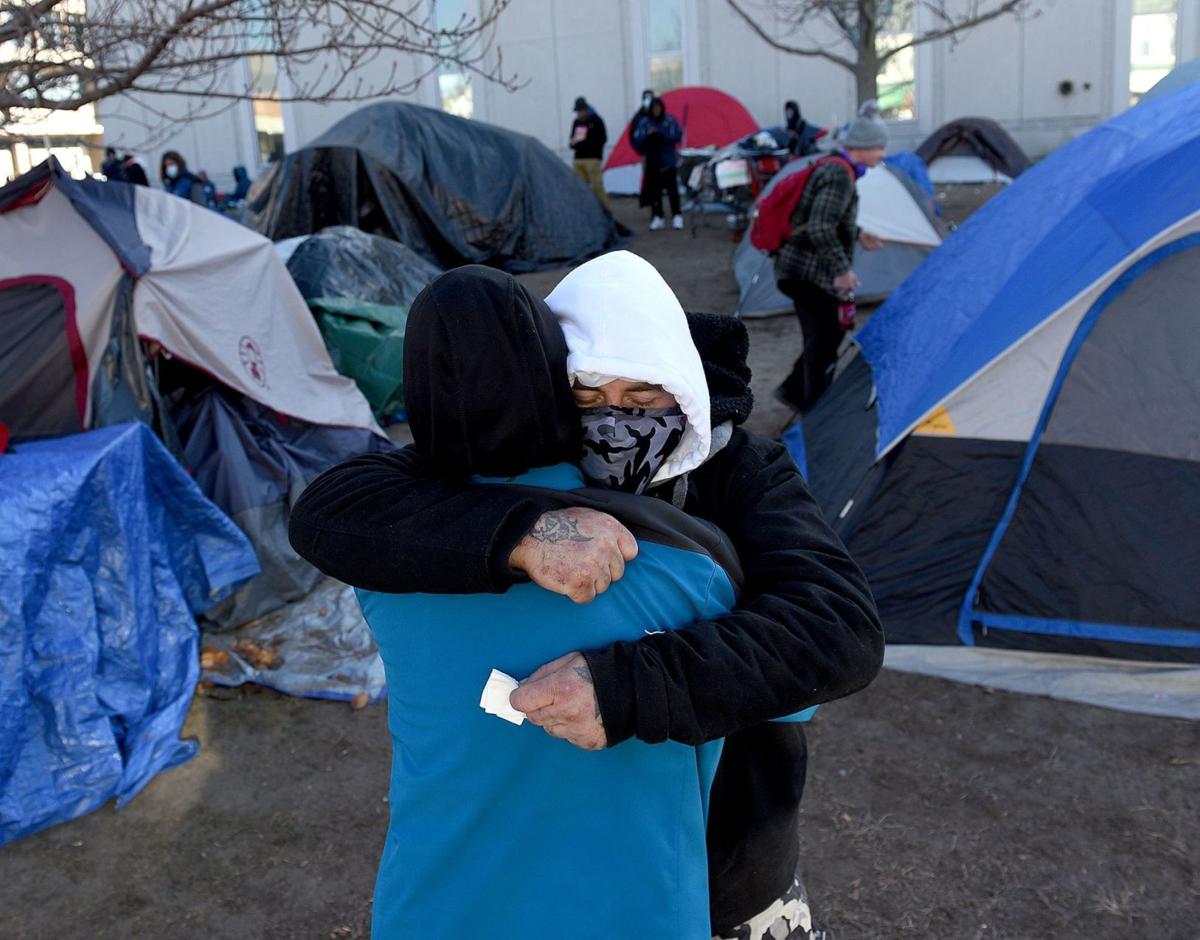 Nick Hoffman (facing camera) hugs his friend Chris Gant before leaving the homeless camp where he had been living outside the Hillsborough County courthouse in Manchester. Hoffman was among more than 20 to go to a recovery center in Derry on Nov. 19. The city is seeking a winter location for a homeless shelter. 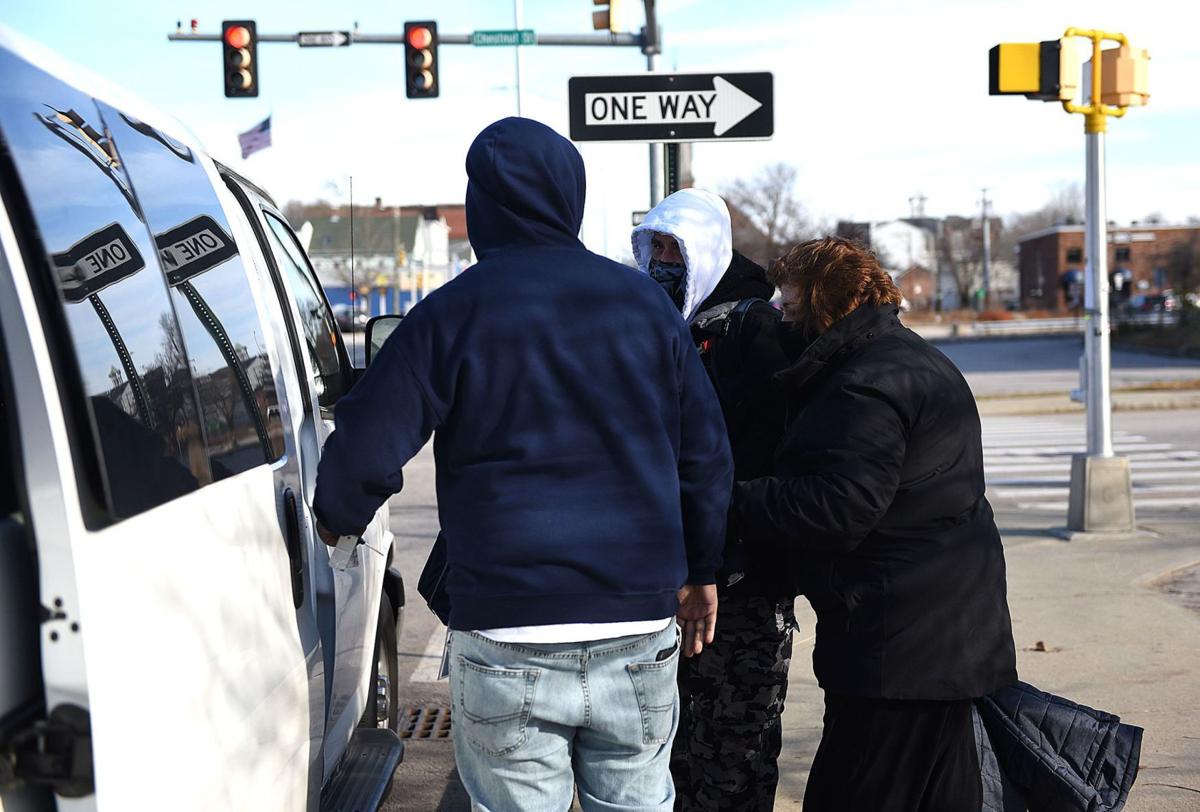 Homeless and living outside of the courthouse, Nick Hoffman, at center, gets helped into a van to take him to a recovery center at Hillsborough County Superior Court in Manchester on Nov. 19, 2020.

More than two dozen homeless people camped at the Hillsborough County courthouse in Manchester traded their tents for warm beds on Thursday, with most of them headed to a Derry recovery center, state officials said.

According to a statement from the state Department of Health and Human Services, 27 people accepted offers of supportive housing.

Meanwhile, Republican Gov. Chris Sununu said protesters at the site have urged some there to refuse housing.

“I can’t tell you how dangerous and frustrating that is,” said Sununu, noting the overnight low temperature was 15 degrees.

He said Manchester city officials have not offered any assistance to the state.

“They’ve been very brazen and vocal about that,” Sununu said.

But, Sununu said, the state is working with Manchester nonprofits directly, and nonprofits from other parts of the state are offering to help.

Fire Chief Dan Goonan said Sununu is lying. Firefighters are at the courthouse encampment as well as camps throughout the city every day. Most of their work involves addressing immediate needs such as physical injuries or illness or mental illness. He said they line up people for housing when beds are available.

When he approaches state officials, “they’re constantly angry that we’ve come to them to ask for help,” Goonan said. “The politics of this is absolutely nauseating.”

On Thursday, Granite Recovery Centers founder Eric Spofford said he had 22 beds at a Derry location and a few more in Effingham in Carroll County.

“This is a warm place, food included,” Spofford said. The state Department of Health and Human Services called him Wednesday night asking if he could help, he said.

People will sleep one or two to a room. Substance abuse and mental health counselors will be available, and Granite Recovery will offer transportation to appointments or to visit family, he said.

He said the state told him to expect the beds will be needed until March. He said open drug use wouldn’t be tolerated, but several campers said workers told them that people in recovery would be segregated from active users.

Granite Recovery represents the most high-profile effort to relocate the courthouse homeless since Monday, the deadline the state set for them to evacuate the property.

As a plain-clothes trooper looked on, state workers and Granite Recovery volunteers tried to coax people into leaving the courthouse for shelter. The overtures came after two frigid nights in which temperatures dipped into the teens.

A buoyant Nicholas Crawford accepted the offer in the early afternoon. Crawford, 26, said he has been at the camp since the summer after getting kicked out of a recovery program for missing a urine test. He said he lost his job because of the coronavirus pandemic.

The first two vans filled up quickly and took off with 15 between them. But volunteers struggled to fill a third van.

“They complain about being in the cold, and then they don’t take the help to get out of it. It makes no sense whatsoever,” Crawford said. He described the camp atmosphere as hectic.

“People here would steal from their own mothers,” he said.

A man who gave his name as Edward said he first agreed to the housing but later turned it down.

“Change messes me up,” said Edward, 27, who said he had a job but lost it to mental illness.

In a statement, state officials said the number of people camping on the courthouse lawn had been pared from 70 on Monday to 45 by Thursday.

It’s unclear how firm that number is. A reporter saw one person get into a van at the courthouse and get out of a car less than a half-hour later and return to a tent.

The homeless on the courthouse lawn are only a fraction of those without homes in Manchester. Throughout the city, about 365 people are homeless and unsheltered, city officials have said.

The camp has drawn media attention and picketers from organizations such as the Mutual Aid Relief Fund and the New Hampshire Youth Movement.

Although the state has promised the homeless will be moved from the courthouse, Mayor Joyce Craig has said she does not want them involuntarily evacuated and end up camping elsewhere in the city.

In a lengthy letter Wednesday, Sununu detailed state spending on homelessness across the state. 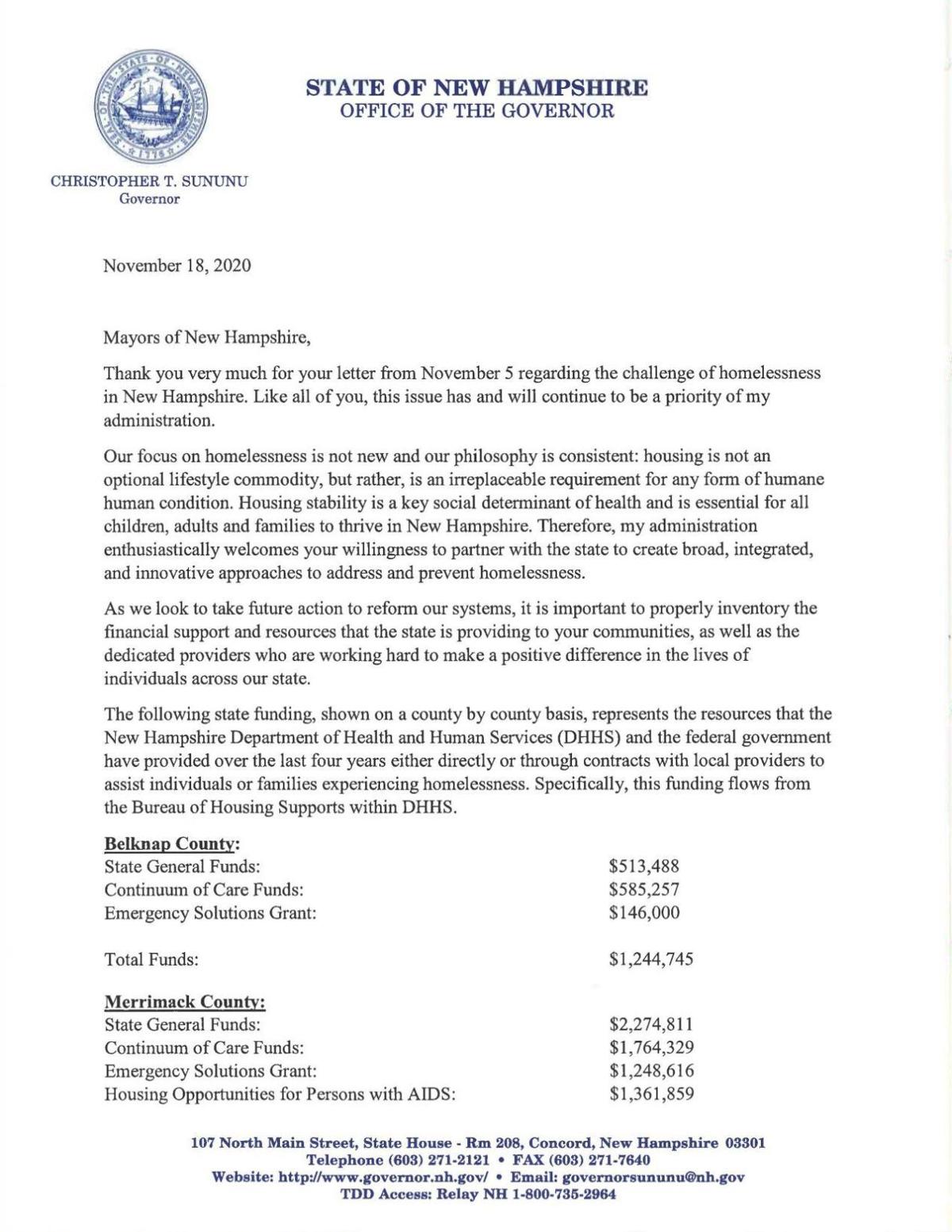 About $6.5 million in state and federal dollars has been budgeted for efforts in greater Manchester to address homelessness, according to the letter.

“Any attempt to politicize, scapegoat, or otherwise undermine efforts to help individuals and families who are experiencing homelessness is reprehensible and will not be tolerated,” he wrote.

In a statement Thursday, Craig said she was glad to see people get housing.

“This is a perfect example of what can happen when the State engages in the fight against homelessness and uses its superior resources to work toward a solution,” said Craig, a Democrat.

Sununu also created a Council on Housing Stability of about 40 members. He has given them until Dec. 14 to come up with strategies and legislative recommendations to address homelessness.

The first phase of the work, due in three weeks, will focus on what he can accomplish by executive order and possible legislation.

DURHAM — The newly elected New Hampshire Legislature, officially now in Republican hands, got off to a chilly start on several fronts on Organization Day at the University of New Hampshire.

American health experts on Wednesday welcomed British emergency approval of Pfizer Inc’s COVID-19 vaccine, a sign that U.S. regulators may soon follow suit in a bid to bring the surging pandemic under control.

The Centers for Disease Control and Prevention on Wednesday said a shorter quarantine period of seven days with a negative COVID-19 test and 10 days without a test would work for individuals showing no symptoms after virus exposure, providing alternatives to the current 14-day standard.

(Reuters) — AstraZeneca Plc will likely get results of its COVID-19 vaccine trial in late-January and could potentially file for an emergency authorization, the chief adviser for the federal government’s Operation Warp Speed program said on Wednesday.

Acts of kindness, moments of grace

Acts of kindness, moments of grace

Fear of flying is a COVID-era conundrum

Fear of flying is a COVID-era conundrum