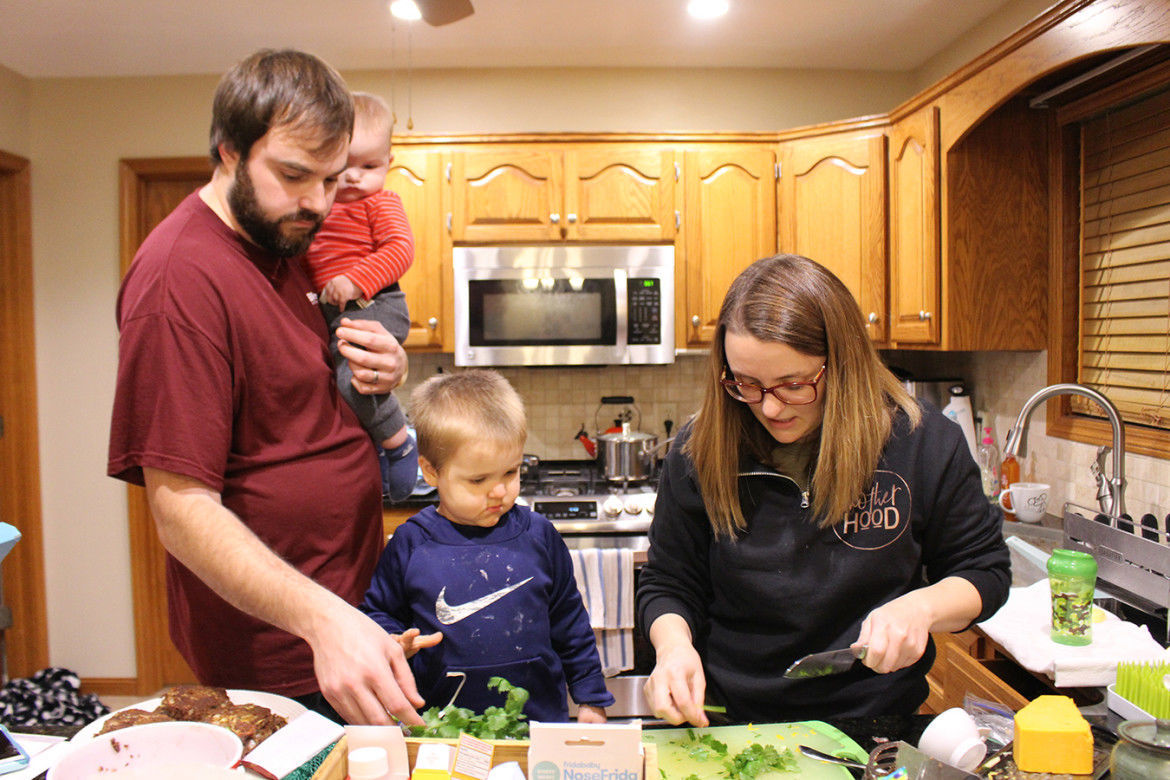 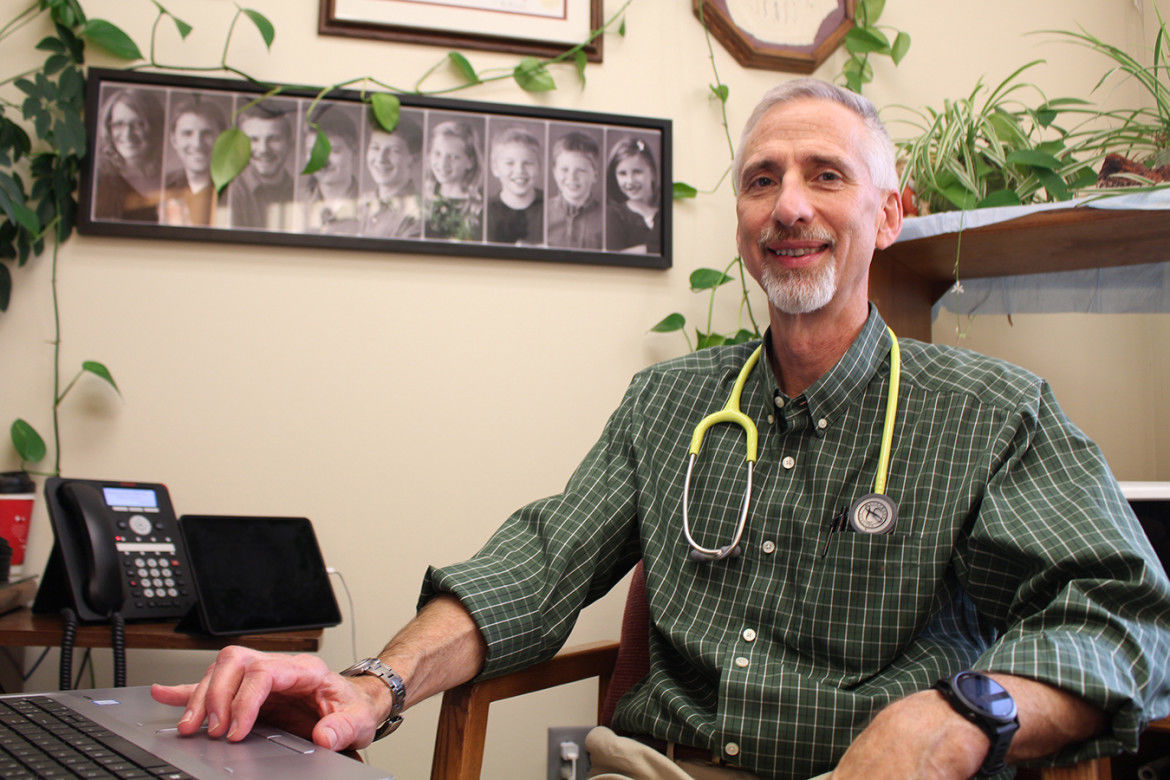 For months after Mercy Hospital Fort Scott closed, patients couldn’t get appointments with Dr. Max Self quickly. “I don’t like to hear that,” Self says. His new employer, Community Health Center of Southeast Kansas, assigned him a medical scribe, who does his computer work. Now, Self says, he can see more patients. 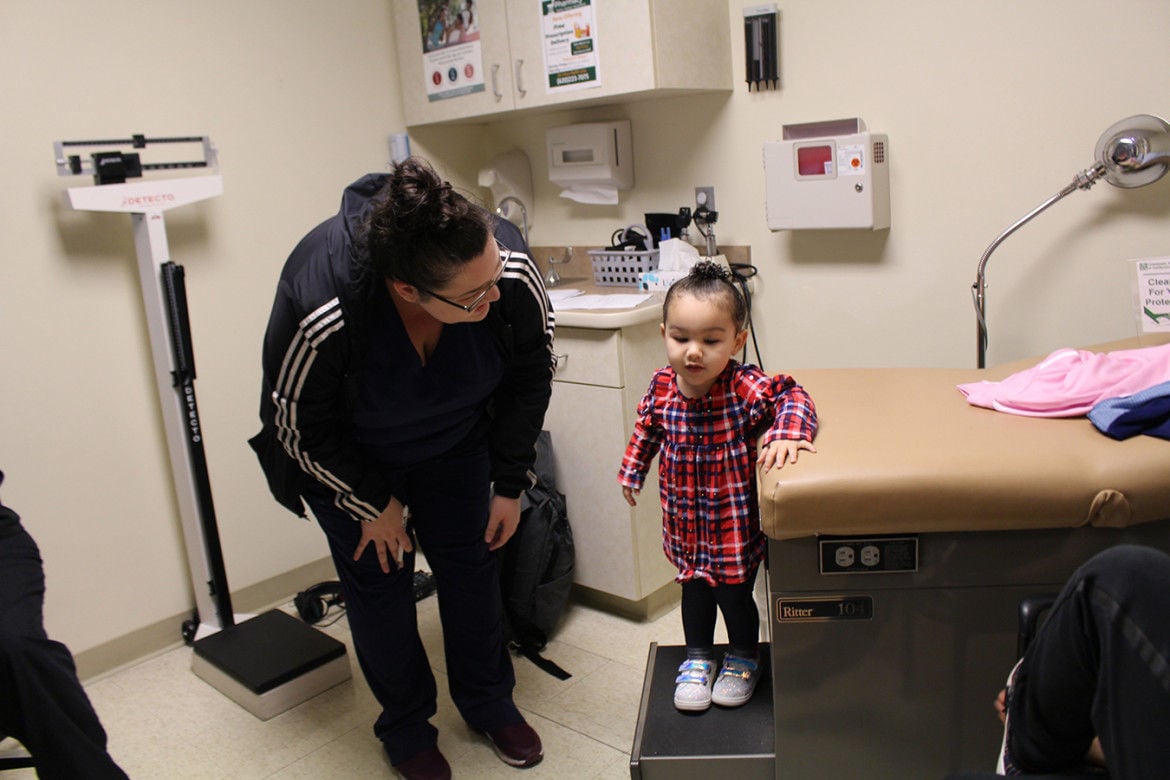 Eliza Oliver helps her daughter, Taelyn, step down from the exam table after her wellness check at Community Health Center of Southeast Kansas. The child’s doctor, who worked at the now-closed hospital, has been given a medical scribe who takes notes. The visit this time seemed more “personal,” Oliver said.

FORT SCOTT, Kan. — Dr. Max Self grabbed a sanitary wipe and cleaned off the small flashlight in his hands. More than 20 years as a family doctor in rural Fort Scott, Kan., has taught him a few tricks: “I’ve got my flashlight. See? Look, you want to hold it?”

Two-year-old Taelyn’s brown eyes grow round and her tiny hand reaches out. But first Self makes sure she opens her mouth wide and he peers down. Behind him sits another staff member — a medical scribe. Self’s scribe gives him the ability to “focus on people,” rather than toggling between a computer screen and the patient. It’s a new perk he didn’t have when he worked at Mercy Hospital.

That hospital closed one year ago and, in the passing months, the small town’s anger and fear evolved into grief, nervousness and — lately — pragmatic hope. Most of the handful of physicians in town stayed, taking jobs at a regional federally qualified health care center that took over much of the clinic work from Mercy. The emergency department, after closing for 18 days, was reopened — run by staff from a hospital that is 30 miles south.

It’s not “all gloom and doom, although we all wish we had a hospital — no doubt about it,” insurance agent Don Doherty said during one of the town’s recent weekly Chamber of Commerce coffee times.

Nationwide, death rates have been higher in rural America than in urban areas since the 1980s, and the gap continues to widen. More rural residents live with chronic conditions, like diabetes, that affect their daily lives. Rates of smoking and premature births are relatively high, and people often die younger in rural areas, contributing to a higher percentage of older residents.

Since 2010, 120 rural hospitals have closed across the country — 19 in 2019 alone, according to data from the University of North Carolina’s Cecil G. Sheps Center for Health Services Research. A national analysis of Medicare cost reports found that 21% of the nation’s remaining rural hospitals are at high risk of closing.

A year ago, after Mercy gave a 90-day notice that it would close, City Manager Dave Martin said the betrayal felt by city leaders led to lawyers and calls with other health care systems about taking over the facility. Now, Martin has realized, “we will not have — or do we need — a hospital.”

But, if not a hospital to care for rural communities like Fort Scott with its 7,800 residents, what is needed? The answers to that question play out every day in Fort Scott and could hold lessons for the rest of the country.

‘You will be taken care of’

Self has cared for his share of struggling patients in this town, where 1 in 4 children live in poverty. Its main corridor — U.S. 69 — is lined with fast-food restaurants. But Fort Scott is “not far off” from what it needs to be healthy. Residents have to travel south 30 miles to Pittsburg, Kan., or north 90 miles to the Kansas City, Kan., area to be hospitalized, but “you will be taken care of,” he said.

Self’s new employer is Community Health Center of Southeast Kansas, which as a federally qualified health center gets a higher level of government reimbursement for Medicare and Medicaid patients than Mercy did, said Jason Wesco, executive vice president at CHC.

The center can also gain grants to take care of the uninsured, which is important in states like Kansas that did not expand Medicaid, though Wesco said CHC has not received any grants for Fort Scott.

Wesco estimates 90-95% of the health care offered before the hospital closed is still available locally. And services have been added, including a much-needed therapist on-site for behavioral health and telehealth access to a psychiatrist and substance abuse services.

“Drive up there, go into the parking lot, you’re like, ‘There’s a lot of people here,’” Wesco said. CHC’s Fort Scott facilities have filled more prescriptions and done more mammograms in a month than the hospital “ever did,” he said.

Local residents like 28-year-old Eliza Oliver, whose daughter, Taelyn, easily passed her annual wellness check with Dr. Self, said it’s much less expensive to get care and prescriptions at the new health center. That part is great, Oliver said, but she still worries about the future of emergency care in town and where people can deliver babies.

Another Catholic hospital chain, Ascension Via Christi, which has a facility 30 miles away in Pittsburg, Kan., stepped in at the last minute to operate Mercy’s old emergency room, signing a two-year agreement. This was vital: While much of the rest of Mercy Hospital Fort Scott had been underused and patient rooms sat empty, the ER handled nearly 9,000 people the year before it closed.

Mercy Hospital delivered more than 230 babies between July 2017 and June 2018. A few months ago, after the hospital closed, Oliver drove a friend who was in labor across the Missouri border more than 20 miles to deliver. “We had to jet over there and even though we made it in time, it’s nerve-wracking,” Oliver said.

Not having a community hospital does require a new mindset. The community still has an obstetrician, but doctors send patients out of town to have their babies. By June 2019, Ascension’s Fort Scott ER staff had delivered three babies for expectant mothers who didn’t have enough time.

Randy Cason, president at Ascension’s Pittsburg hospital, drove to Fort Scott to tell the Chamber of Commerce that doctors needed to “counsel and educate” mothers that it’s no longer a 10-minute drive to the hospital.

Sherise Beckham, a former Mercy dietitian, was anxious on bed rest this spring while awaiting a baby. “You’re on a two-lane highway; a lot of times you get behind a semi, behind a tractor,” Beckham laughed. “Sometimes, you are lucky if you have cell service.”

Beckham’s delivery did not go as planned. After driving to Ascension’s Pittsburg hospital to meet her family doctor, she had an unexpected cesarean section, and the baby, whose heart rate dropped dramatically, was transferred to a neonatal intensive care unit an hour away from home in Joplin, Mo. Now, eight months later, the baby is healthy, though he continues to see a physical therapist who monitors his developmental progress.

Recent research by Katy Backes Kozhimannil, an associate professor at the University of Minnesota School of Public Health, found that rural residents have a 9% greater chance of dying or suffering complications such as heart failure, stroke or the need for blood transfusions during childbirth, compared with non-rural residents.

CMS declined to comment on the timing of the proposal.

Congress, too, has made overtures to passing legislation. Maggie Elehwany, lead federal lobbyist for the National Rural Health Association, said the Affordable Care Act’s promise that hospitals would have more insured patients and less bad debt “never really unfolded in rural America.” The 14 states that have not adopted Medicaid expansion are largely rural and many are in the South, where the greatest number of hospitals have closed.

Catholic nuns founded the Fort Scott hospital more than a century ago and 89-year-old Fred Campbell still recalls a mantra etched in stone over the entrance of one old Mercy hospital building: “Dedicated to suffering humanity.”

“We always felt that, man, come hell or high water, you’re gonna be with us and you’re not going to abandon us,” Campbell said.

But exactly a year ago, its then-owner, St. Louis-based Mercy, a major health care conglomerate with more than 40 hospitals, declared it no longer financially viable.

Within weeks of Mercy closing, a newly built $9 million grocery store closed. A few weeks later, the cancer center closed and, by October, the town’s dialysis center had closed, too. John Leatherman, professor for the department of agricultural economics at Kansas State University, said there’s no doubt Bourbon County took “a big hit” when the hospital was shuttered.

But Fort Scott economic development director Rachel Pruitt said the loss of the hospital has not affected the city’s sales tax revenue. Manufacturers like the community’s largest employer, Peerless Architectural Windows and Doors, with its 400 jobs, continue to expand — just down the road from where Mercy’s 177,000-square-foot hospital building still stands.

City leaders say ideally the community would “right-size” its health care. That would include keeping the current outpatient clinics that provide primary care and an emergency department but also adding some inpatient beds, allowing residents who need short-term hospitalization to stay local. Pruitt said there has even been talk of adding a wound center that could treat injuries among the town’s industrial workers.

And, though the mostly empty Mercy Hospital building feels like a white elephant, that, too, may soon change: Mercy recently announced it would donate land in a repurposed corner of its property to CHC. Health center leaders have hired an architect for a new building that will probably be about 30,000 square feet. Wellness, imaging, walk-in care, a women’s health center, dental care and expanded primary and specialty care would be available.

LITTLETON — Hospital officials are awaiting confirmation from the federal Centers for Disease Control and Prevention as to whether a 19-year-old patient who recently returned from China is carrying the coronavirus.

As primaries near, Buttigieg struggles to make headway with black voters

ORANGEBURG, S.C. — Pete Buttigieg is betting big on Iowa and New Hampshire, hoping success in the largely white states will help him overcome dismal support from black voters by the time more diverse states weigh in on his bid for the presidency.

CHICAGO/SHANGHAI/SEOUL — Airlines including United Airlines Holdings Inc. said they were canceling some flights to China as demand fell sharply and global companies told their employees not to travel on deepening fears over the spread of a flu-like virus.