CONCORD — Six years after medical marijuana became legal in New Hampshire, nearly 100% of patients fail to receive cards to get the drug within a mandated time frame, according to a legislative performance audit.

State law requires the state to approve or deny applications to the Therapeutic Cannabis Program within 15 days of getting them, and then it must issue identification cards within five days of any approval.

But even that most recent and best performance was nearly three times longer than the five-day mandate. 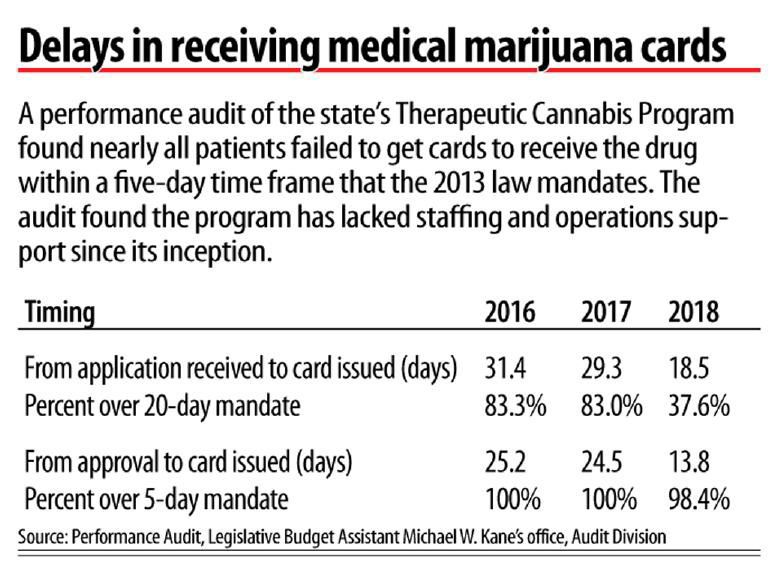 “We found the TCP approved initial applications in all cases within the 15-day standard, however, 98.4 percent of the cards were not issued within the five-day standard,” auditors wrote.

Former Lakes Region Republican state Rep. Ted Wright said he’s not surprised about the results of the first performance audit of the state’s Therapeutic Cannabis Program that found on many fronts a failing grade.

The former Moultonborough resident — viewed by many as the political godfather of the medical marijuana law — has brought many a hard-hearted lawmaker to tears talking about his wife, Cindy, who has battled Stage 4 breast cancer since 1993.

A decade ago, the couple found and got access to an experimental drug, Kadcyla, that would kill the cancer cells in her body.

“She lost 32 pounds; the cancer was gone but she was just wasting away, and I worried it was just a matter of time before I’d lose her. Then one day someone in a medical office setting pulled me aside and said, ‘Somebody just had a joint in our restroom this morning. You might want to try that,’ ” Wright recalled.

“I took that to heart, got some and within an hour we were home and she was eating the biggest meal she had in more than a year.”

The audit plainly states there has been insufficient follow-through since the law passed.

“Although the program was authorized by the Legislature, it did not initially provide a budget during the development phase, which contributed to the program’s inconsistent operations, ineffective client service, inadequate database and immature management control environment over card issuance,” the audit said.

There were 6,480 patients in the program last year, being treated for 7,380 medically eligible conditions.

While ailments like cancer, Parkinson’s disease and multiple sclerosis get the most attention when it comes to using marijuana, the most common qualifier in N.H. is more generally “moderate to severe chronic pain.”

The audit also found the state’s database was so flawed and data so inconsistently entered, it was impossible to verify, and called for a system replacement.

“A common theme running through the nine observations that follow was that adequate staffing had been problematic since the program inception,” the audit stated.

Public Health Director Lisa Morris said her agency has taken these serious findings to heart, and she will move to fill and dedicate three more staff.

“The department is committed to improving operations, improving customer service and improving timeliness of card issuance and over the next year, it will implement needed changes,” Morris said.

But the agency conceded it won’t become fully efficient overnight.

“Considering the depth, breath and complexity of the changes called for, it is expected that the department will need 12 months to fully implement policies to come into compliance,” the Division of Public Health Services said in its response to the audit.

Matt Simon, New England political director for the Marijuana Policy Project, said he has heard it before, and charged these systemic failures initially were by design.

“A lot of this reflects what happened after the law passed. The police chiefs got all upset it was signed, and screamed that it’s an experimental program with stories such as diversion of the drug and that teens would get their hands on it. All these things didn’t come to pass, and in the meantime they let the program sit out there with no support,” Simon said.

“As a result, the Legislature never bit the bullet to really spend to get these cards out on a timely basis.”

Wright said he initially got behind a medical marijuana bill with a home-grow options, but then-Gov. and now-U.S. Sen. Maggie Hassan sent word she wouldn’t support it.

“My preference was to take Vermont’s law, cross out Vermont and put New Hampshire in, but nobody was going to do that. She (Hassan) wanted some control over it,” Wright said.

“My fears came true that it was going to become not only bureaucratic but so expensive that it was unaffordable, and the street levels were going to be much lower than what you were paying.”

Six years later, advocates were back, getting the New Hampshire House for the eighth time to approve a home-grow option for these patients.

The Senate followed suit and passed the bill (HB 364), but on Aug. 2, Gov. Chris Sununu vetoed it, citing black-market worries.

“New Hampshire has reasonable regulations set up to ensure that our therapeutic cannabis program responsibly treats those in need while limiting the diversion of marijuana to the black market and ensuring that products meet public health standards,” Sununu wrote in his veto message.

“This bill would bypass those public health and safety guardrails and make the job of law enforcement significantly more difficult.”

Hampton Democratic Rep. Renny Cushing, one of the sponsors, has said it’s an injustice to make a felon out of someone trying to “grow their own medicine.”

This isn’t a partisan issue; the Senate would override Sununu’s veto if all Democrats were for it.

As for Ted and Cindy Wright, they no longer call New Hampshire home.

After five years on the medical marijuana program here, the Wrights made the difficult decision to leave the Granite State and move 20 miles over the border into Acton, Maine.

Medical marijuana through one of New Hampshire’s five dispensaries was costing them $425 an ounce.

“That’s more than a car payment. We needed to cut our costs, and in Maine, there’s not only legalization but there’s grow your own,” Wright said. “They also allow people with their own plants to gift someone, and that’s what we are relying on now until we start growing.”

“She can’t eat without it, to be honest,” Wright said.

Wright, the onetime squadron leader of an Army National Guard 172nd Infantry Regiment (Mountain), can only marvel at the courage and staying power of Cindy, who has gone through 27 clinical trials.

During one trial, after five years, she was the only one still alive of 50 who took part.

“We are in it for the long haul; this is where it really hits home,” Wright summed up.

“It is a story of hope we like to put out there. You can get despondent and discouraged. There are people we have reached out to say: stay as strong as you can, but whatever you do, don’t ever lose hope.”

The United States has seen its highest ever number of new COVID-19 cases in the past two days, keeping the pandemic a top election issue as Vice President Mike Pence travels the country to campaign despite close aides testing positive.

State health officials are warning that individuals who have tested positive for COVID-19 recently visited several New Hampshire restaurants while the individuals could have been infectious. And that means the potential for community exposures at those restaurants.

For youth hockey teams, COVID tests a small price to pay for getting back to the ice

Getting back to the ice was the most important thing for the Squirt hockey team Jeff Stavenger coaches, after a two-week pause on hockey. A nasal swab is a small price to pay.