For two years in a row, New Hampshire has seen a decrease in drug overdose deaths. But many officials say there is still a long way to go to address the epidemic.

The state anticipates a total of 364 drug deaths in 2019 — 107 fewer than the 471 deaths in 2018, according to the Office of the Chief Medical Examiner. The total includes 80 pending toxicology reports, which can take months to complete.

David Mara, the governor’s adviser on addiction and behavioral health, hopes New Hampshire is turning a corner in the nationwide opioid crisis.

“That is a significant decrease,” he said. “It means that some of the things we are doing in the state are working.”

Mara, who previously served as police chief in Manchester and Portsmouth, mentioned more people seeking treatment through the state’s Doorway opioid response system, launched last January, and other initiatives, including the distribution of naloxone kits.

“The Doorway is getting people into the system and as we keep on building capacity for that system we believe we are going to have a bigger effect on the number next year as well,” Mara said. 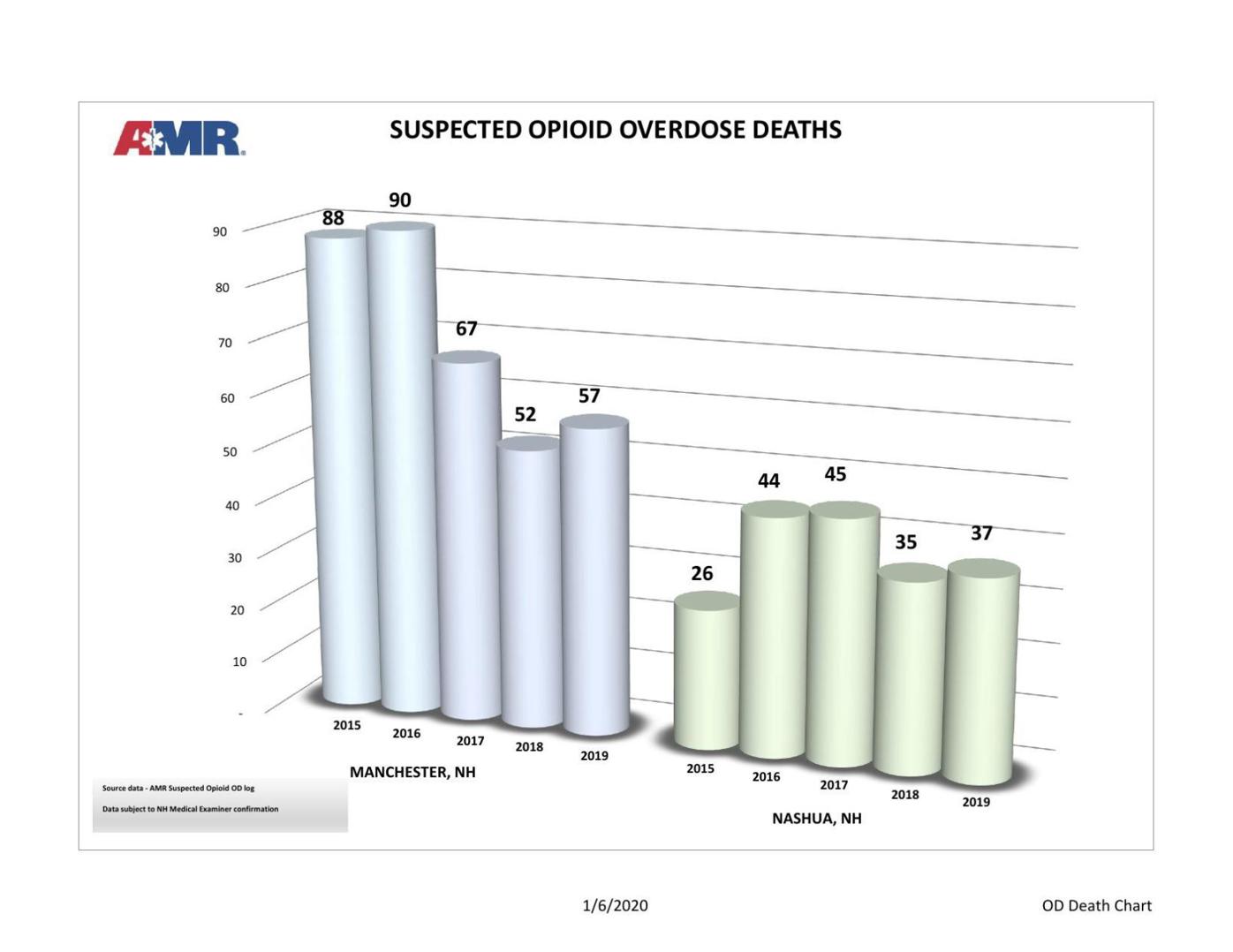 Overdose deaths steadily climbed starting in 2012 before hitting a record high of 490 in 2017.

The 2019 data shows the most deaths come from fentanyl or a fentanyl mix with heroin or other drugs.

Contrary to the statewide statistics, opioid overdose deaths increased in Manchester and Nashua after 20% decreases in 2018, according to data from American Medical Response (AMR), an ambulance service used by both cities.

Overdoses were down 19% in Manchester and 17% in Nashua.

“We think that more people are coming to urban areas to receive treatment, in particular because there is generally more options available in a city like Manchester and Nashua than there would be in a smaller community,” said Christopher Stawasz, regional director for AMR.

People who are in recovery and relapse are more likely to overdose after being clean for a period of time, he said.

“While progress is being made on many fronts and the availability of rapid access to recovery services has grown significantly, the power of the opioid epidemic remains formidable,” Stawasz wrote in an email.

As of last weekend, 10,000 people have sought recovery services through the Safe Station programs in Manchester and Nashua since fire stations first opened their doors to those seeking treatment in 2016.

Some Manchester officials in August decried the Doorway program, saying the city is being swamped by people seeking addiction treatment.

“That is still way too many,” he said of the drug deaths statewide. “I hope people don’t become complacent because of these numbers.”

He is advocating for treatment options closer to Seabrook because he hasn’t seen any evidence that drug use or addiction is down.

“When you look at the Doorways or any of these intake processes there has to be on the other side of the doorway immediate treatment options, not two- or three-day waits,” Sherman said.

In Laconia, the number of deaths and overdoses is down. The city has reported one confirmed fentanyl overdose death with eight pending toxicology in 2019 — down from 12 confirmed deaths in 2018, according to Eric Adams, prevention enforcement treatment officer.

The deaths are likely down because of a combination of prevention efforts and some addicts switching from opioids to methamphetamines, he said.

“I don’t think we are out of the woods yet, but I think that we are moving in the right direction,” Adams said. “I feel like more people in our communities are understanding that it is OK to ask for help.”

While encouraged by the data, Mara said the state still has “a long way to go” in addressing the epidemic. One step is working on prevention efforts and getting more transitional housing options, he said.

“That’s too many people,” he said of overdose deaths. “We have to keep on doing what we’re doing with a goal of eliminating that number and making it go down to zero.”

She wrote scripts for others but used the drugs herself, the Board of Medicine says.

Catholic Medical Center and Southern New Hampshire Health have taken over management of the state’s Doorway program in Manchester and Nashua.

CONCORD — A requirement to wear masks in the State House ended Friday over the objection of Democratic legislative leaders, who said it could put State House staff at risk until more in the state were fully vaccinated.

Drs. Oz & Roizen: The exercise you need in your 20s to enjoy your 40s and beyond

President Joe Biden's ambitious $400 billion plan to improve in-home care for the elderly and lift wages for millions of workers may be limited by states' ability to opt out, based on early proposals from Congress.

Walk away from heartburn and GERD

Walk away from heartburn and GERD