Dr. Jayakumar Patil said he had been working with a board-mandated mentor to improve his practice as the result of an early case that went to the board.

But the board’s decision, signed late last week, involved a complaint that took place before he started working with the mentor.

“I haven’t been given a chance to change the way I was practicing with my mentor,” Patil said. 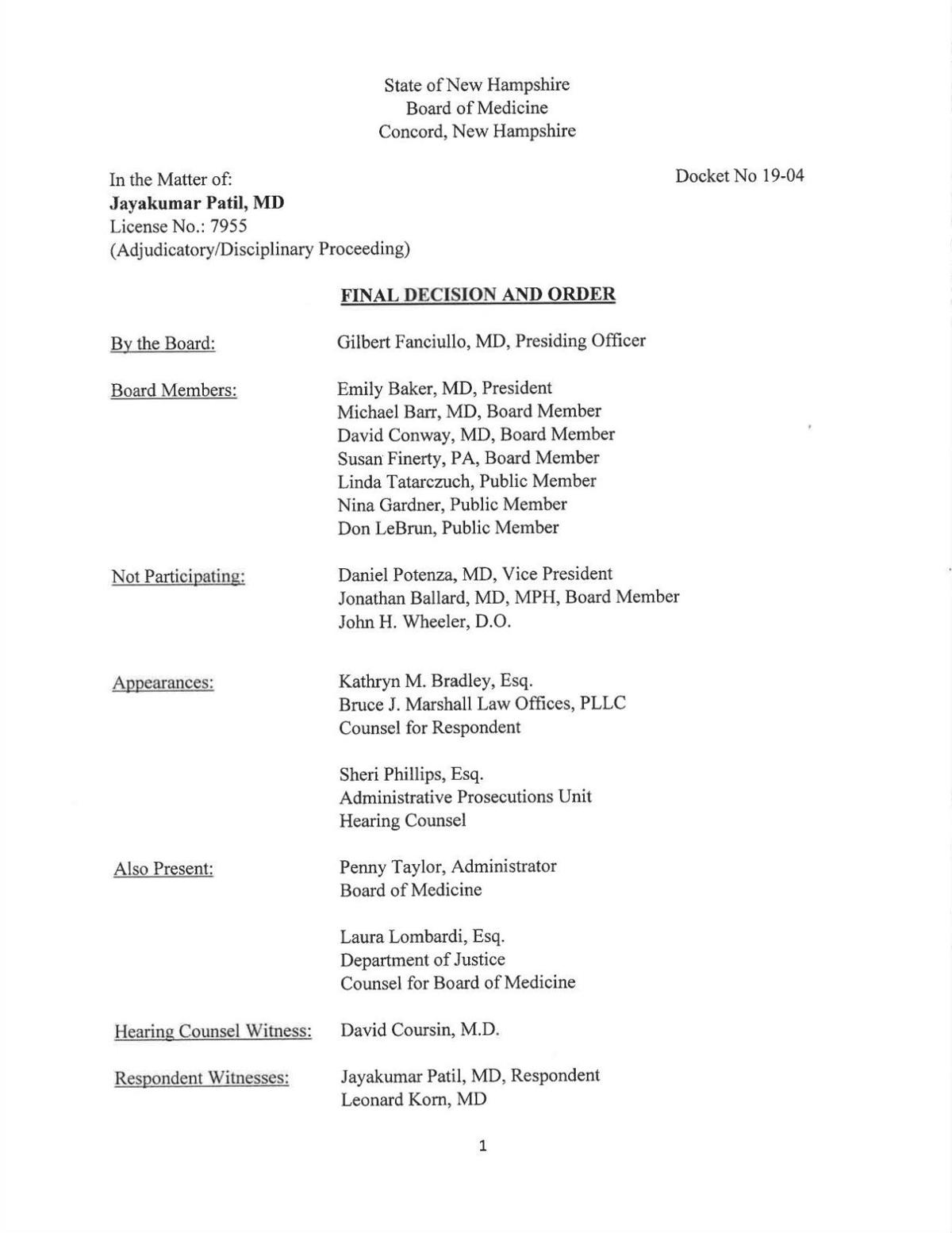 Patil has been a psychiatrist for 31 years and is currently a sole practitioner operating out of a Palamino Lane office in Bedford.

The board gave him 30 days to wrap up his practice.

The board took the rare step to revoke the license after a June hearing that involved a board-appointed expert, medical and prescriptions records involving a patient, and Patil’s testimony.

The board found he violated laws or professional standards seven times in the treatment of a man identified as C.C. in 2017. That treatment — including prescribing stimulants to a man with an elevated heart rate — represented a danger to the patient and did not meet the standards of psychiatric care, the board said in its findings.

“Given these circumstances, and give Dr. Patil’s past history with the Board, the Board finds revocation the appropriate level of discipline,” the board wrote in its Jan. 10 order.

It is the fourth time Patil has gone before the board, each of the other three resulted in settlement agreements that called for fines. The 2017 incident called for course work, a skills assessment and 18 months of monitoring.

Patil complained that the board launched an investigation based on a examination of a patient that took place before he had a chance to work with his mentor. He said his lawyer is working on an effort to get the board to change its mind so he can keep his license.

“That’s all I want. They can watch me closely; that is perfectly fine,” he said.

He also complained that the expert that the board relied on to review his work has never worked on outpatient psychiatry and has little experience with the ailment involved in the case, ADHD.

Patil said he has roughly 1,000 patients, and he encouraged them to write the Board of Medicine about their experience with him.

Daily he receives calls from potential patients who say they cannot find a psychiatrist.

“I feel bad for some of the patients who cannot find another provider or prescriber,” he said.

The revocation case centered on the patient C.C., who visited Patil’s office in early February 2017. He had a heart rate of 118 beats per minute, but Patil did not note the rate on his evaluation form or discuss it with C.C.

The Board’s expert faulted Patil for his diagnosis of ADHD combined type, arguing he did not meet the criteria for the diagnosis. And Patil prescribed Adderall — a stimulant — despite the elevated heart rate.

“That’s a major red flag,” said the Board expert, Dr. David Coursin, according to the Board decision.

He also faulted Patil for exceeding some recommended prescription doses.

Patil told the Board he does exceed recommended prescription doses at times, a practice known as off-label prescribing. He said C.C.’s level of hypertension was not high enough to rule out stimulants. At one point, he prescribed blood pressure medicine for C.C.

His mentor, Dr. Leonard Korn, told the Board that Patil was improving his practice under his mentorship and stressed that C.C. preceded the mentorship.

“Dr. Korn has already spoken with Dr. Patil that changing the dosing frequency of medications too often is not advisable, and to instead make small changes one at a time,” the board wrote.

The 30 day delay in the revocation is to give Patil time to wind up his practice, facilitate referrals, transfer patient records and notify patients, the board wrote.