Officials said the evidence led to no conclusions about the contagion’s source. Nor could they say whether it was spread through food, person-to-person contact, a contaminated environment or other potential contamination routes.

“As a result, this norovirus outbreak is classified as being of indeterminate origin,” the report stated.

A restaurant co-owner faulted the state for leaving out that neither of the two servers who got sick ate any of the food served to the private family party on Nov. 24. 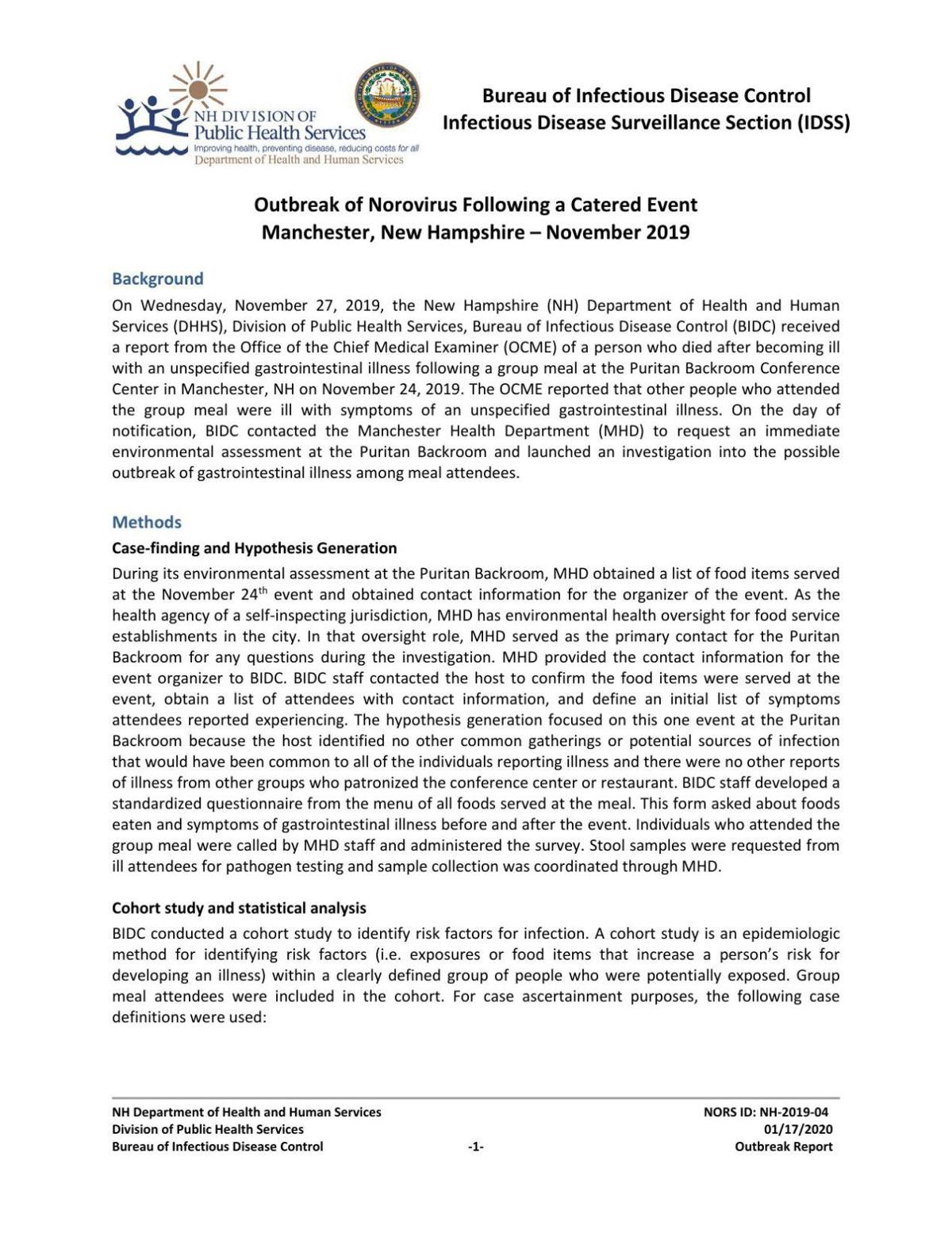 That means the food wasn’t responsible for the outbreak, said Arthur Pappas, a co-owner.

“It is not as clear as I’d like it to be,” Pappas said of the report. “One hundred percent, it didn’t come from the food. I know that.”

The Puritan Backroom is one of the most popular restaurants in Manchester, and partially owned by Pappas’ son, Chris Pappas, the first-term Democratic congressman who represents the 1st Congressional District.

In late December, health officials acknowledged they had traced a norovirus outbreak to a Puritan Backroom banquet center event on Nov. 24, and the disease contributed to the death of an unnamed Hillsborough County resident.

The report is the second from a government agency to address the outbreak.

An inspection by the Manchester Health Department in the days that followed the event found no issues with food-handling and preparation.

The report, dated Jan. 17, generated a lot of facts: 18 guests and two workers fell sick; the median incubation period was 1-1/2 days; macaroni and cheese had the highest risk factor of any food served; hot tea the lowest.

The analysis, based on questionnaires and interviews, centered on when people got sick and what they ate.

Officials developed risk ratios for each food served. The ratio compares the proportion of people who became ill who ate each food to those who didn’t eat the food and became ill.

Macaroni and cheese had the highest ratio — of the 38 who ate it, 17 became ill. None of the two who abstained from the mac and cheese got sick.

The risk ratio of 2.69 compared to a ratio of 0.55 for chicken tenders, 1.02 for duck sauce and 2.18 for ice cream cake, the second-highest risk ratio for the prepared foods.

But the state said those findings weren’t strong enough to conclude anything.

“No statistically significant associations between illness and individual food items consumed were identified,” the report stated.

None of the Puritan Backroom workers reported being sick on the day of the event, and none of the guests was sick in the days leading up to it, the report stated.

Jake Leon, a spokesman for the state DHHS, noted that city inspectors found no violations known to increase the risk for food-borne illness. Therefore, he said, there is “no specific risk to the public from this establishment.

The report contained no additional information about the person who died, who officials have previously described as a Hillsborough County adult.

State officials have said it would be a violation of privacy laws to reveal whether the person had other medical conditions.