CONCORD — Gov. Chris Sununu announced Tuesday that hospitals in Manchester and Nashua will assume the “Doorway” functions of the state’s opioid response plan, stripping the responsibility from the Granite Pathways organization.

Sununu and his recently confirmed commissioner of health and human services, Lori Shibinette, said Granite Pathways had been too slow to forge community connections and did not properly follow up on patients it had placed into programs.

Catholic Medical Center will take over Doorway responsibilities in Manchester; Southern New Hampshire Health will do so in Nashua.

Under the state model, a Doorway serves as the entry point for people seeking help for drug or alcohol issues. That agency then places them in the appropriate setting with treatment providers or other agencies, given their needs. The system is often referred to as a “hub-and-spoke” model. 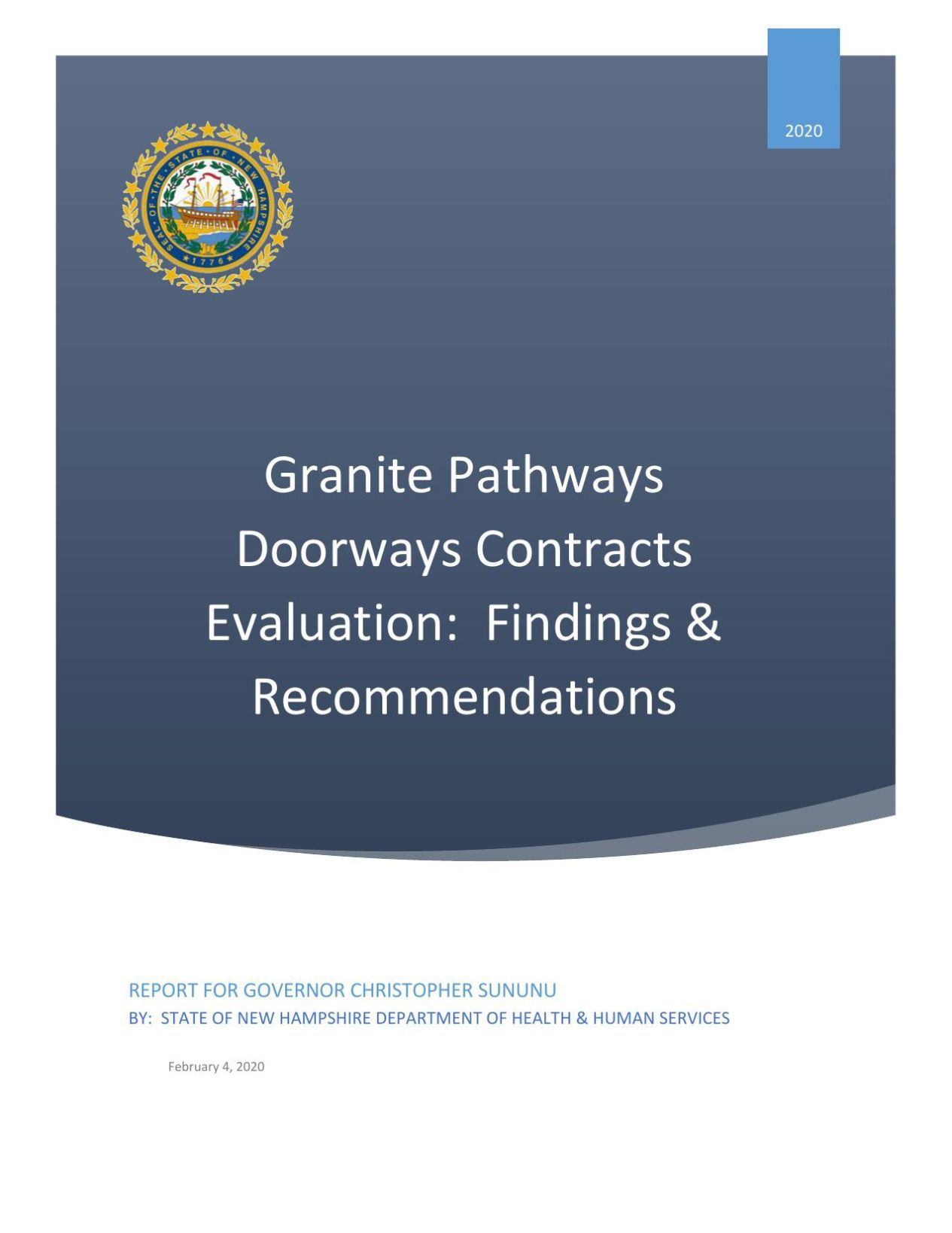 “Granite Pathways struggled to forge those community relationships necessary to be a successful hub,” Shibinette said.

In a lengthy statement, Granite Pathways state director Patricia Reed pledged cooperation in the transition. She said the state asked Granite Pathways to run Manchester and Nashua Doorways because an agreement could not be reached with Manchester hospitals to operate the program.

“As part of that structure, our work in both Manchester and Nashua has made a significant difference. Most importantly, lives have been saved,” Reed said. She credited the many community providers who joined the hub-and-spoke model. 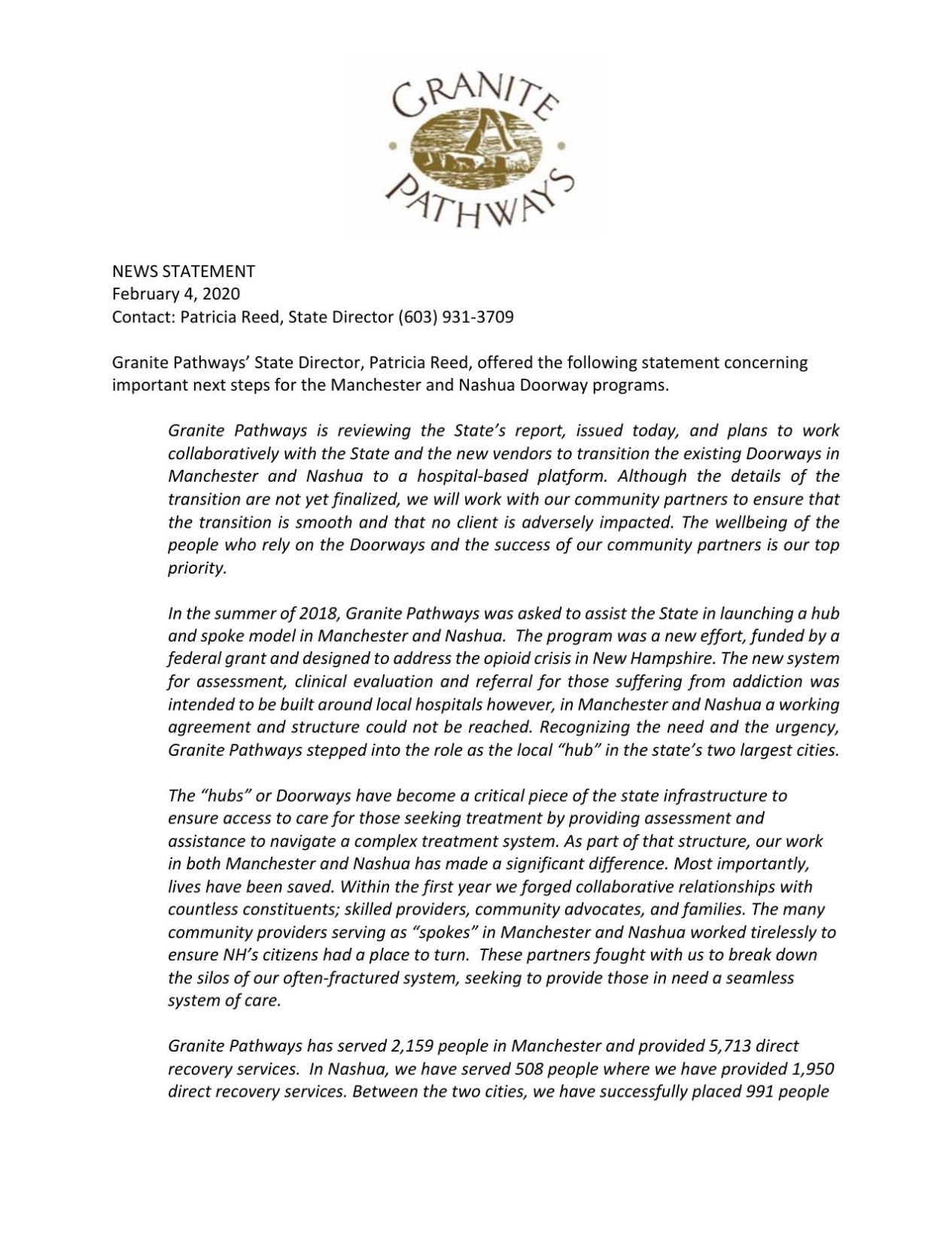 She said Granite Pathways served 2,159 people in Manchester and provided 5,713 direct recovery services. In Nashua, 508 people were served, with 1,950 direct recovery services provided.Alex Walker, the chief operations officer at CMC, said the hospital did not refuse to operate the Doorway in 2018, but Granite Pathways stepped up.” We don’t have to be the lead dog,” he said, “but we want to be part of the solution.”Sununu noted that the state started a review of Granite Pathways this past fall following problems with the residential adolescent drug treatment program that Granite Pathways operated at the Sununu Youth Services Center. Most hubs in New Hampshire are associated with hospitals, and hubs work best when that’s the case, he said.

“We want to be nimble,” Sununu said of the switch.

Democratic gubernatorial hopeful Dan Feltes said Sununu should have been talking to people in the treatment community to understand the real issue.

“Governor Sununu’s Doorway modification does not address the program’s fundamental flaw, which is the complete lack of treatment and bed capacity,” Feltes said in a statement. He said Sununu’s mismanagement exacerbated the homeless crisis in Manchester.

Sununu said 7,000 people have gone through the Doorway program to date, but his office did not provide a breakdown for Manchester and Nashua.

In Manchester, the Doorway operated out of a converted mill building at 60 Rodgers St.

The establishment of nine Doorway programs across the state provided treatment options in communities, and the number of people moving to Manchester for treatment is dwindling, he said.

“There’s always been an epicenter in Manchester, that’s exactly the decades-old habit we’re trying to break with this Doorway system,” Sununu said.

He said Manchester receives a lot of resources for programs such as treatment and recovery, recovery workplaces and housing.

“I am hopeful that upon further review, the state will improve access not only in Manchester, but to all hub locations so individuals have access to treatment options within an hour from where they live,” Craig said in a statement. “This includes building off the success of Safe Station by opening all hubs 24 hours a day, and ensuring adequate recovery are available across New Hampshire.”

Shibinette said her department is finalizing its contract with the two hospitals, and it should go to the Executive Council for final approvals in March. That will be followed by a 60-day ramp-up and a 30-day overlap with Granite Pathways.She said Granite Pathways has been performing well with other state contracts, which deal with substance abuse issues. 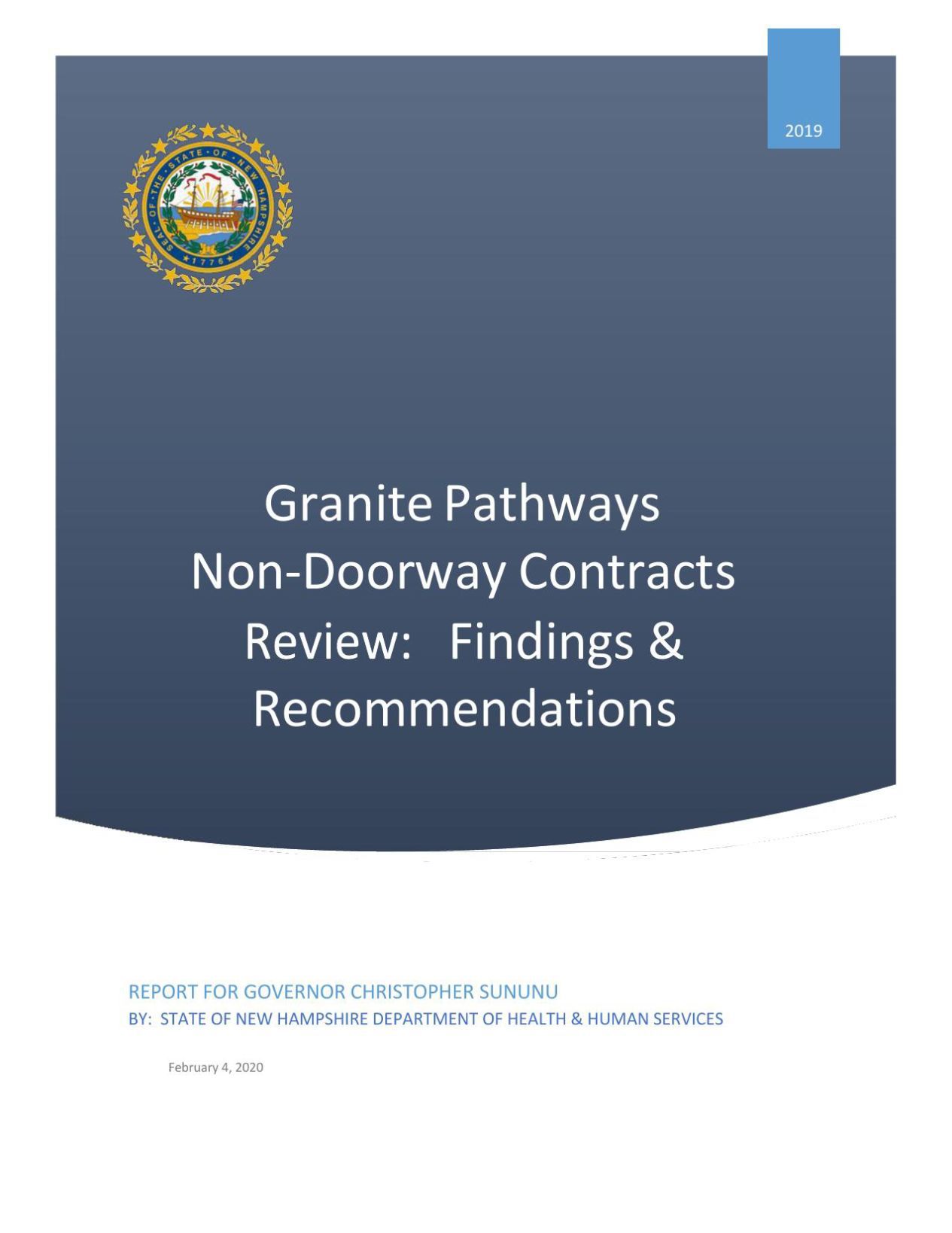 “We want to continue being partners with them,” she said.

A year after launch, need for Doorways services on the rise

Catholic Medical Center and Southern New Hampshire Health have taken over management of the state’s Doorway program in Manchester and Nashua.

SOMERSWORTH, New. Hampshire -- The family of the defiant Baptist pastor linked to Maine's largest COVID-19 outbreak after officiating a wedding near Millinocket in August will gather next month for another wedding and reception, just a few miles from virus hotspots in York County.

Maskless meetings, carpooling to blame for faculty and staff COVID numbers at UNH

After seeing the number of COVID-19 cases among students on its three campuses drop dramatically, the University of New Hampshire is now dealing with a sharp rise in cases involving faculty and staff, at least partly because safety policies weren’t followed, officials said.

Coronavirus deaths rise above a million in 'agonizing' global milestone

The global coronavirus death toll rose past a million on Tuesday, according to a Reuters tally, a grim statistic in a pandemic that has devastated the global economy, overloaded health systems and changed the way people live.

A pandemic upshot: Seniors are having second thoughts about where to live

A pandemic upshot: Seniors are having second thoughts about where to live