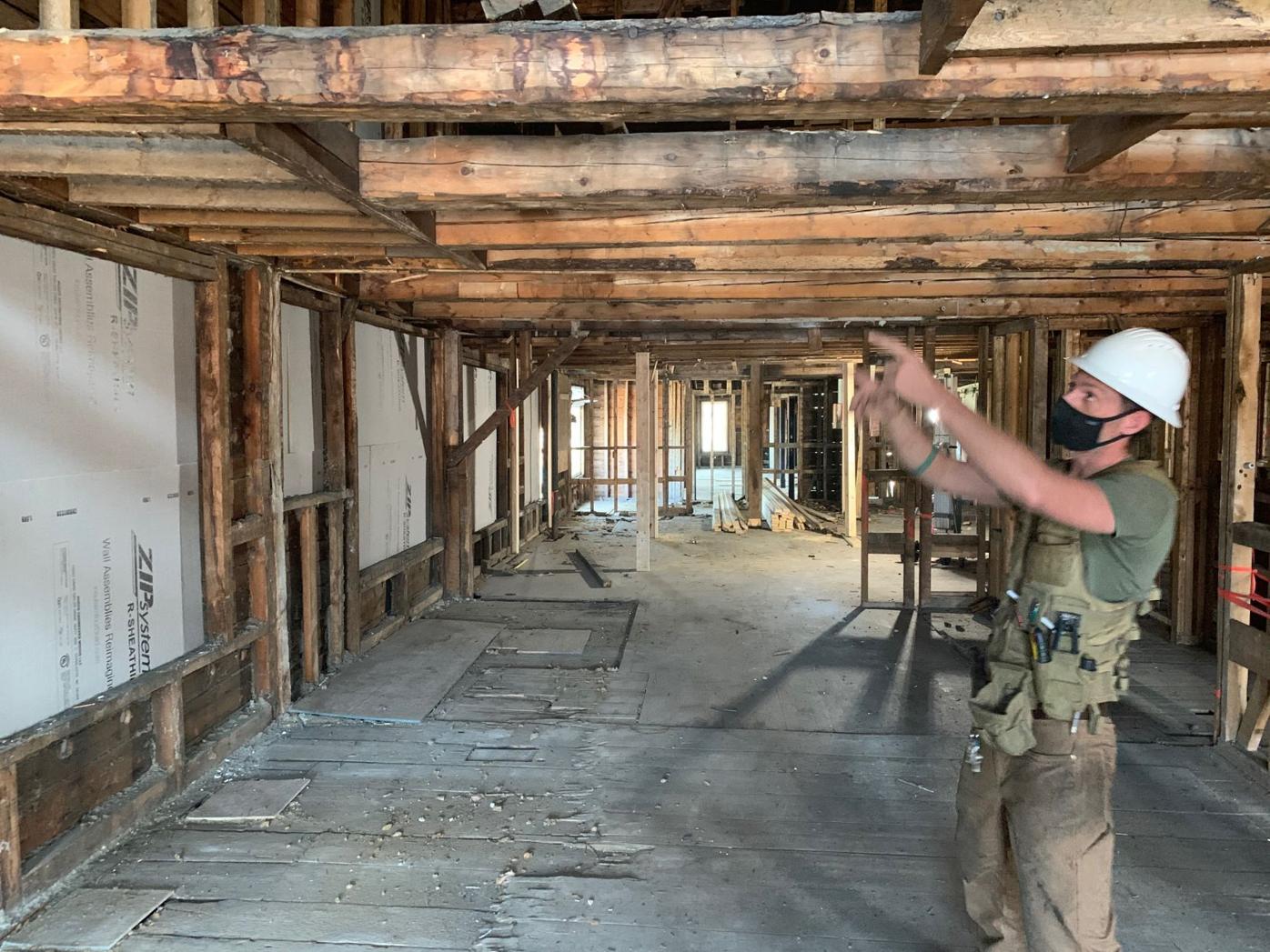 Ben Schott of Garland Mill, the company overseeing renovation of the former Parker J. Noyes Pharmaceutical Company building in downtown Lancaster, points out some of the structural elements of the 150-year-old building. 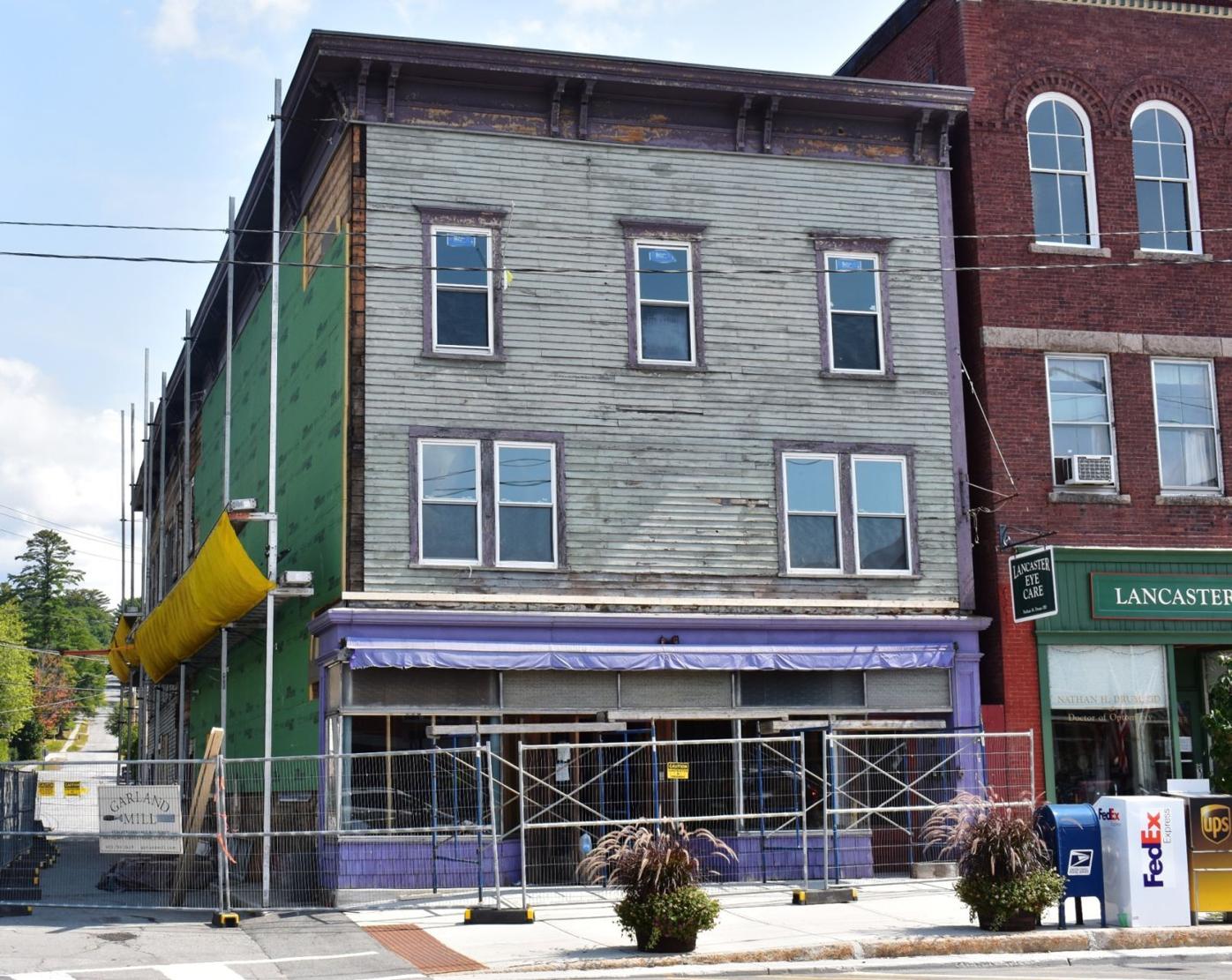 A Northern Forest Center project in downtown Lancaster is giving new life, inside and out, to the former Parker J. Noyes Pharmaceutical Company. 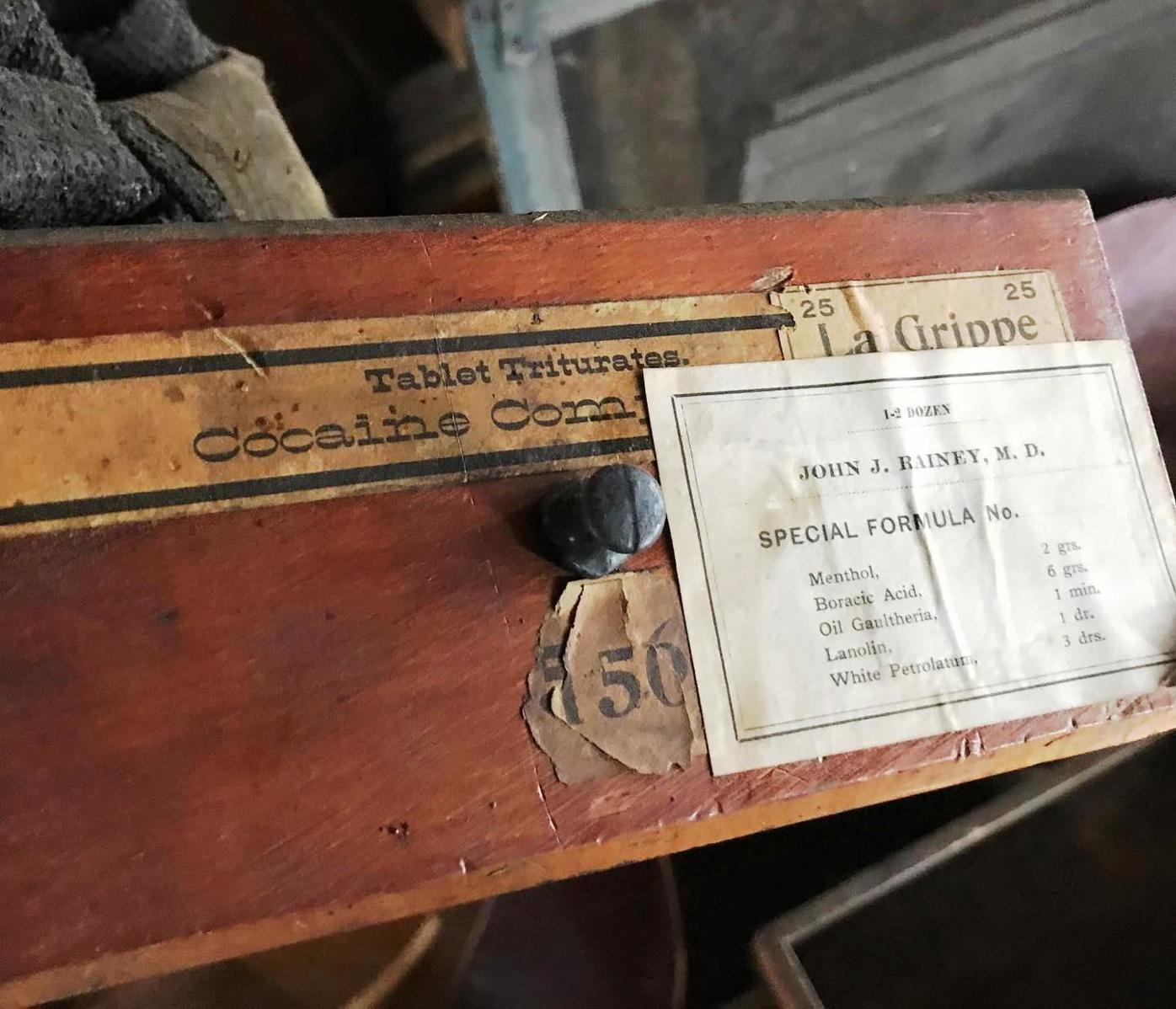 This wooden drawer of “Tablet Triturates” reflects a time when Lancaster was at the epicenter of the pharmaceutical trade. It is labeled as containing a cocaine compound. 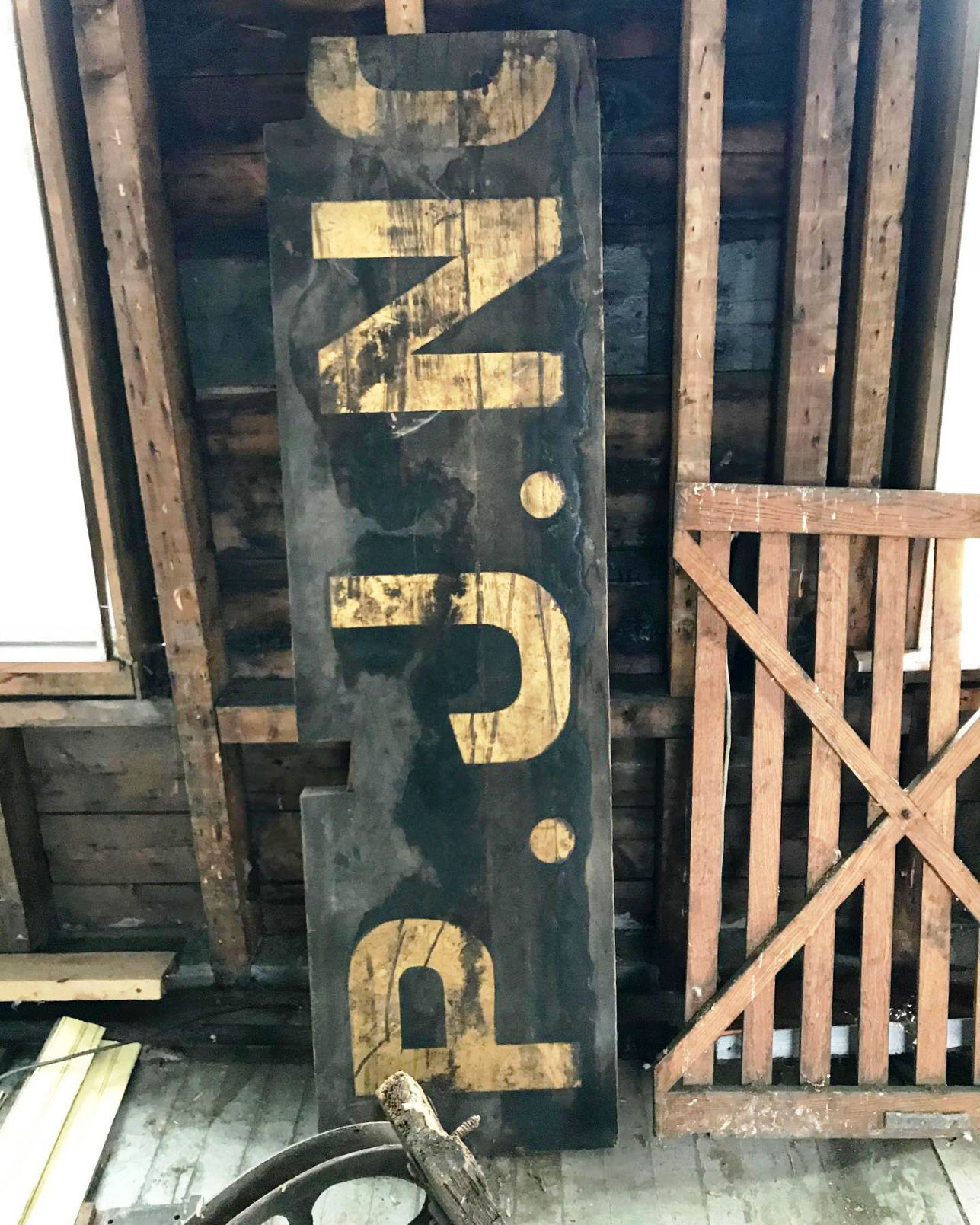 Gold lettering on a black-painted sign identifies this uncovered gem as part of the 20th-century Parker J. Noyes Pharmaceutical Company in Lancaster.

LANCASTER - Wooden drawers marked with labels for cocaine and morphine, hand-hewn beams and old wooden signs are just some of the remnants construction crews have uncovered in a project to transform a 150-year-old building in Lancaster into residential and commercial space.

At the corner of Main and Bunker Hill streets, the building was the former home of the Parker J. Noyes Pharmaceutical Company, which developed the sugar-coated pill more than a century ago.

The Noyes building was purchased in 2018 for approximately $130,000 by the nonprofit Northern Forest Center, which has offices in Concord and South Portland, Maine. The renovated first floor will provide a new, expanded home for Lancaster’s Taproot Farm & Environmental Education Center, along with its Root Seller Marketplace, which is a “locavore” marketplace with a farmer’s market and natural food store. The second and third floors will feature six two-bedroom apartments.

The demolition process began in July, and many of the materials that have been recovered will be reused. David Southworth, who is president of Lancaster’s Garland Mill — the construction manager on the project — is documenting the progress and the many discoveries on his company’s Facebook page. Items include structural pieces, a glass bottle with its label still partially attached, and signatures and dates on some of the wood work.

“We found there are at least four different parts of the building since the original footprint, which dates to the mid-19th century,” said Rob Riley, the Forest Center’s president. “Above the third-floor ceiling, we found a number of old drawer fronts that were part of the pharmaceutical mix that they used back in the day with different labels like morphine, cocaine ...”

They also discovered rough-sawed timbers and evidence that at one time there had been a fire in the building, Riley said. Still, he said, “the structural integrity of the building, despite its age, is quite strong.”

Ben Gaetjens-Oleson, the Lancaster town planner, said the Noyes building had been vacant for about five years and was in danger of being torn down.

“I’m very excited about the redevelopment and (the building) being brought back to its past glory, if not better,” said Gaetjens-Oleson, who hopes the project will bolster the downtown and increase traffic to shops. I’m hoping that the building will be in a condition where it can stay for many generations afterwards.”

Riley said work was on schedule for a September 2021 opening of the Root Seller Marketplace, with the completion of the apartments to follow soon thereafter.

The rehabilitation of the Noyes building is the first venture of its kind in New Hampshire by the Forest Center, said Riley. The project stemmed from a sense that there was “a real opportunity to bring new investment and life into an essentially vacant corner building.”

The Noyes building is a point of pride for the North Country. In 2017, the New Hampshire Preservation Alliance put the building on its “Seven to Save” list, citing it as the place where Noyes’ company patented the sugar-coated pill and later developed the first precision food pellet for laboratory animal use.

“Thanks to Noyes, by the turn of the 20th century, Lancaster was an epicenter of pharmaceutical manufacturing, allowing the company to expand and invest in its research, advertising, and Main Street presence,” according to the Preservation Alliance. “The company also felt strongly about the Lancaster community. During the Great Depression, the Noyes Family constructed a brick oven used to bake bread to donate to neighbors and townspeople.”

Gaetjens-Oleson said the Noyes building redevelopment is among a half-dozen projects in recent years that range from visual to major improvements, but “certainly this is the most substantial because it’s from the ground up.”

The Lancaster Planning Board four years ago adopted new zoning to make projects like the Noyes building easier to undertake, said Gaetjens-Oleson, and the town has also helped upgrade some of the infrastructure around it.

There was already momentum in Lancaster for reviving buildings, and the Noyes project was “a good fit for us,” Riley said. Once completed, at an estimated cost of $2.5 million, property taxes will go to the town.

Housing and commercial space are just two of the elements necessary for a vibrant, year-round community, said Riley. The Forest Center is working to provide others, including recreational opportunities, support of wood-products manufacturing and expanded broadband access. The Noyes building will have a wood-pellet heating system, which the Forest Center said will reduce energy consumption and greenhouse gas emissions.

“All of these things need to work together and I believe, that in many cases, the solutions that are being brought to communities are one-dimensional, and that’s not going to fix the problem. Our approach has many different pieces.”

This timeline is compiled from records released by the Navy from a 1963 court of inquiry looking into the loss of the USS Thresher and its 129 crew members.

PRANJANI, Serbia — A monument shaped like a military transport plane was unveiled on a Serbian hillside on Saturday, commemorating the rescue of hundreds of allied pilots who were shot down by German forces during World War II.

MANCHESTER — The Currier Museum of Art will purchase the Chandler House from the Catholic Diocese of Manchester, saving the 150-year-old Victorian mansion from the wrecking ball, the two organizations announced Wednesday.