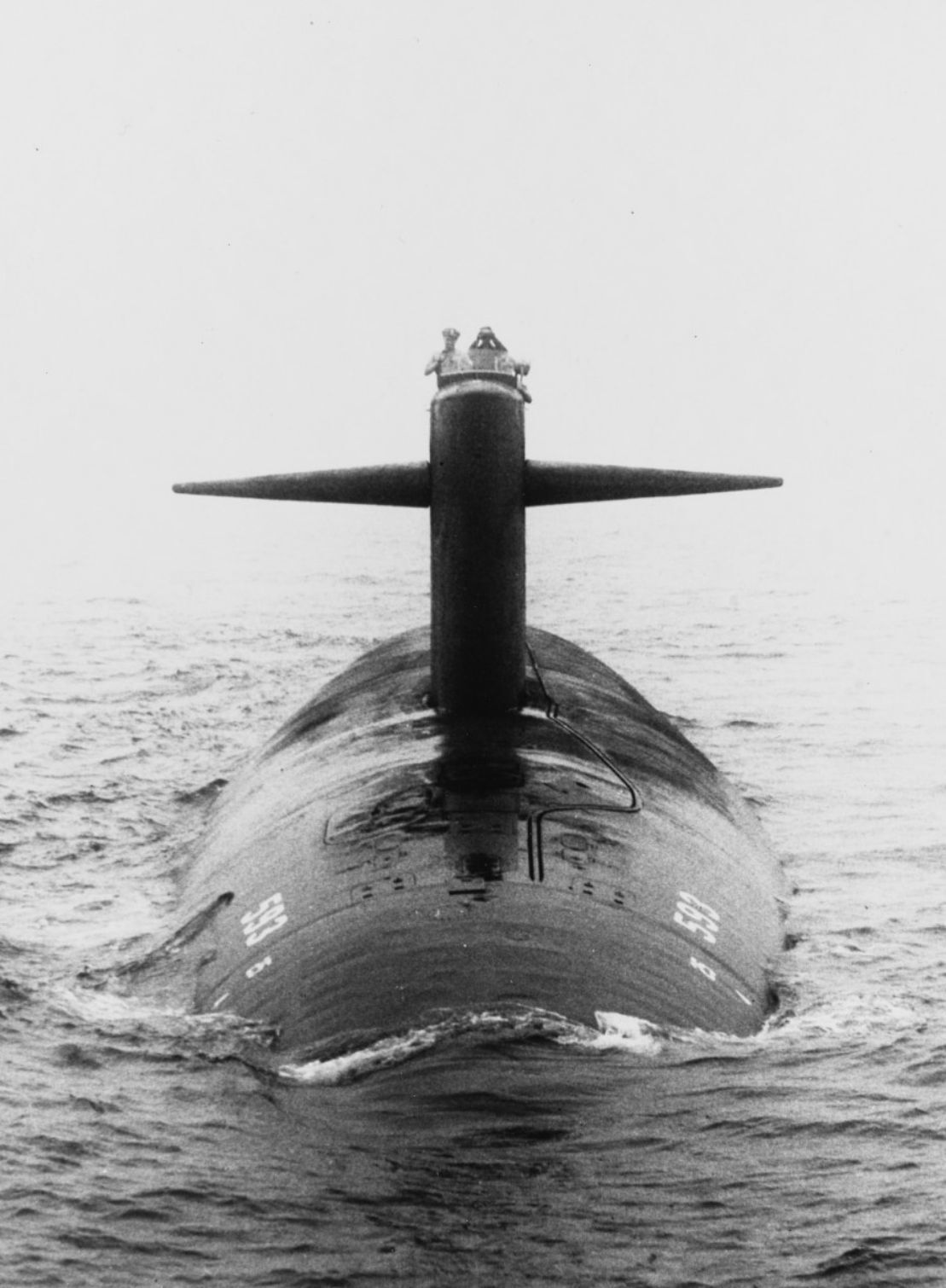 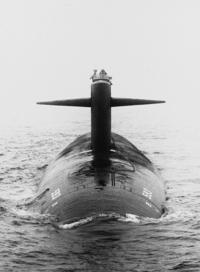 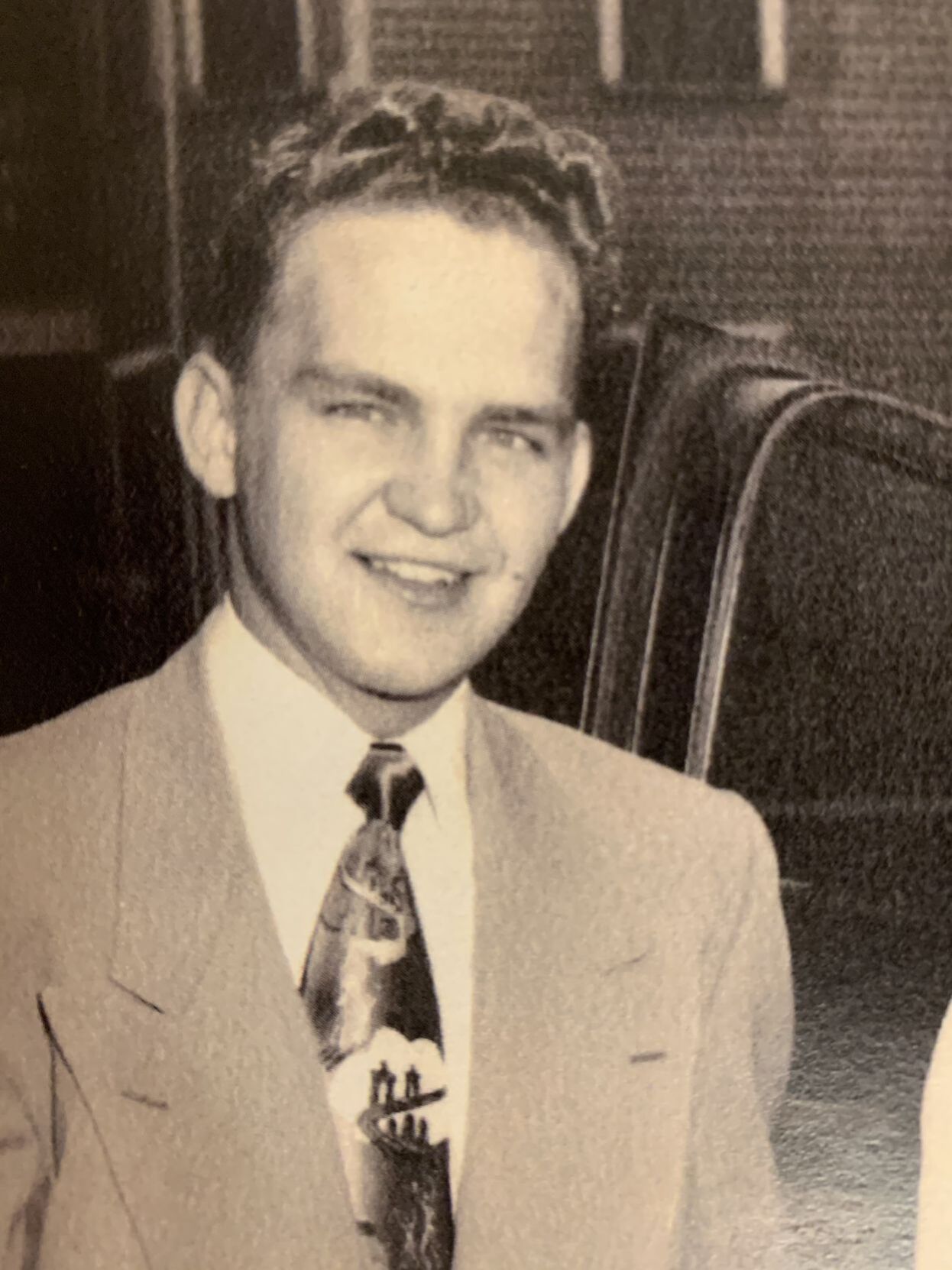 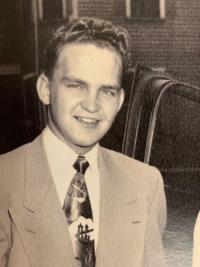 Walter “Jack” Noonis was the chief radioman on the USS Thresher. 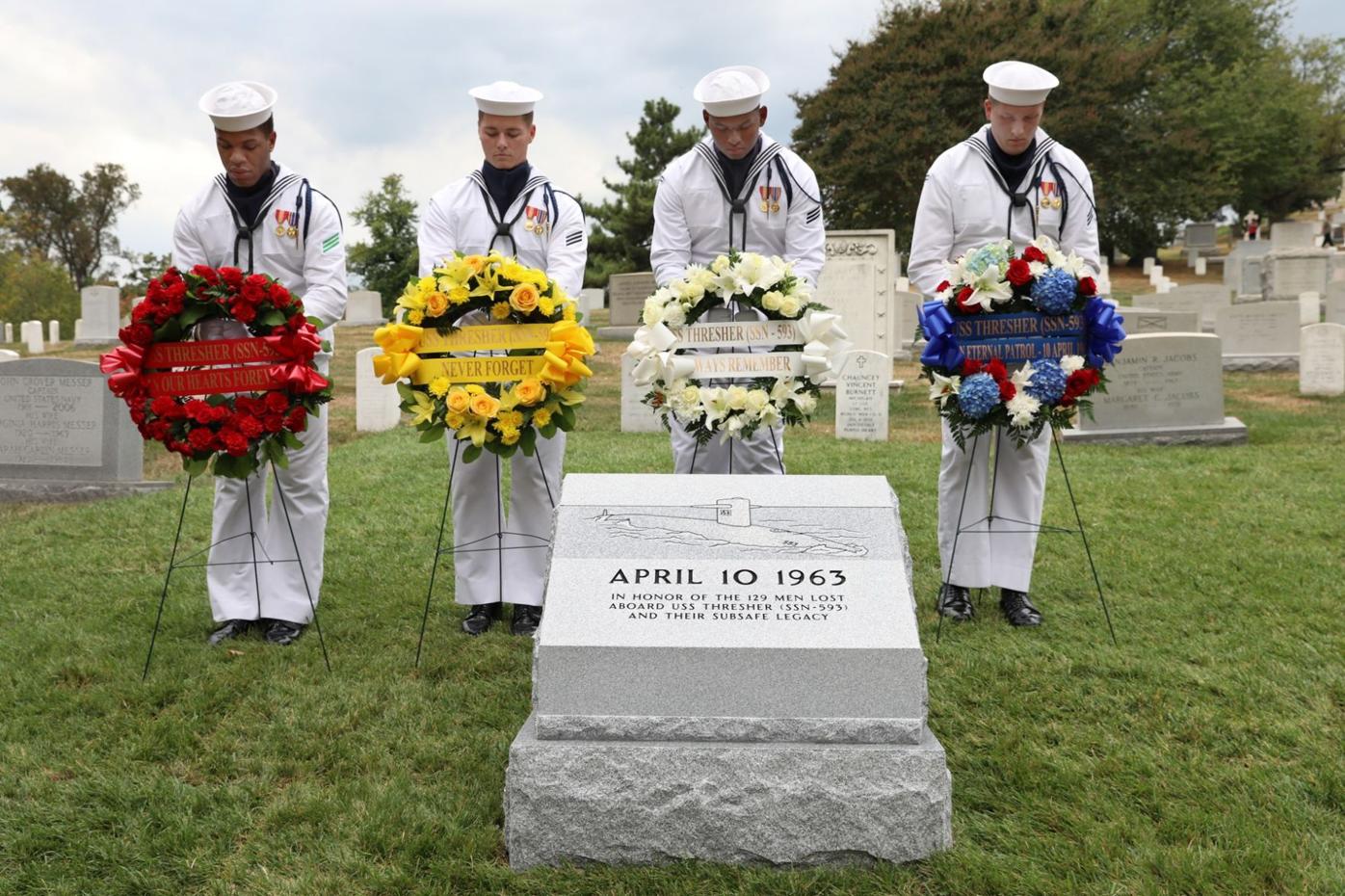 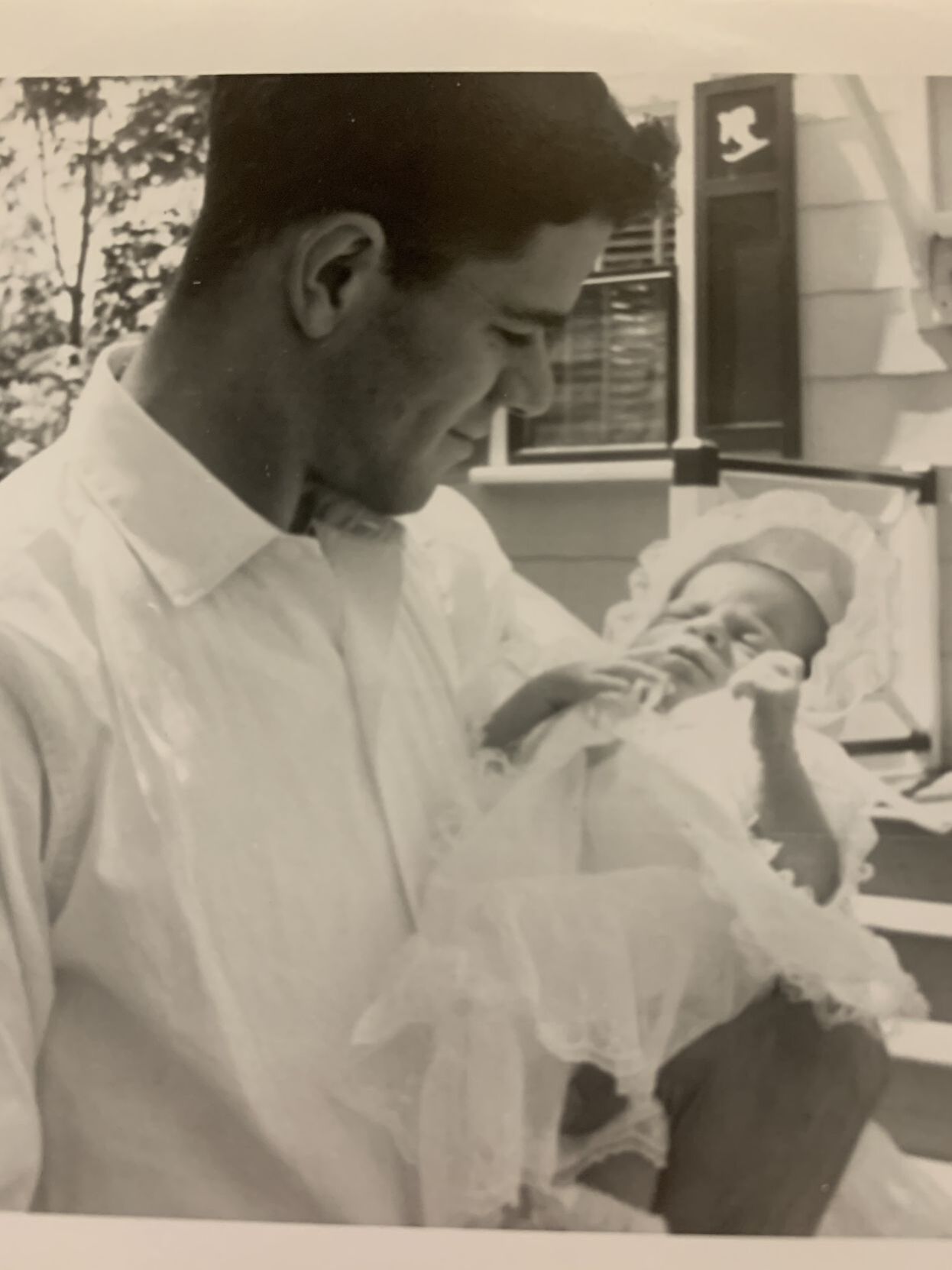 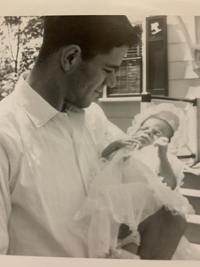 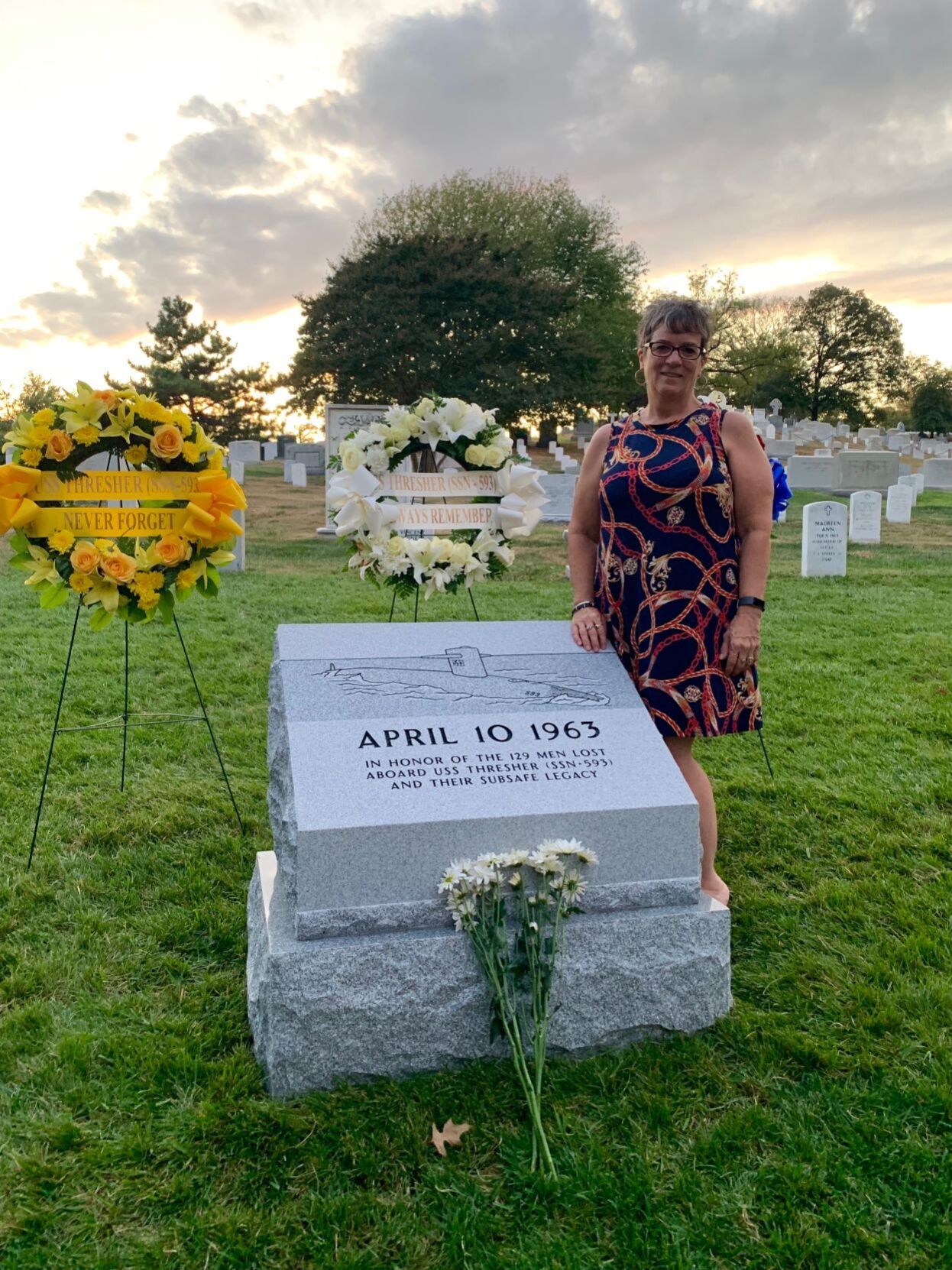 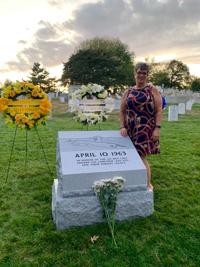 Vivian Lindstrom attended the dedication of the memorial to the USS Thresher crew at Arlington National Cemetery last September. She was 2½ years old when her dad, Samuel Dabruzzi, died when the sub sank in 1963. 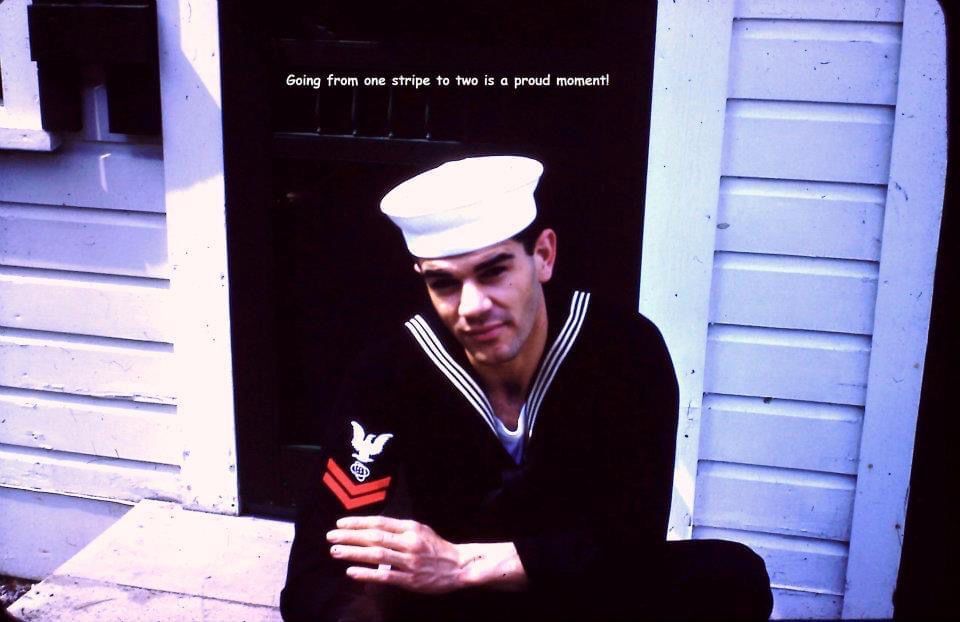 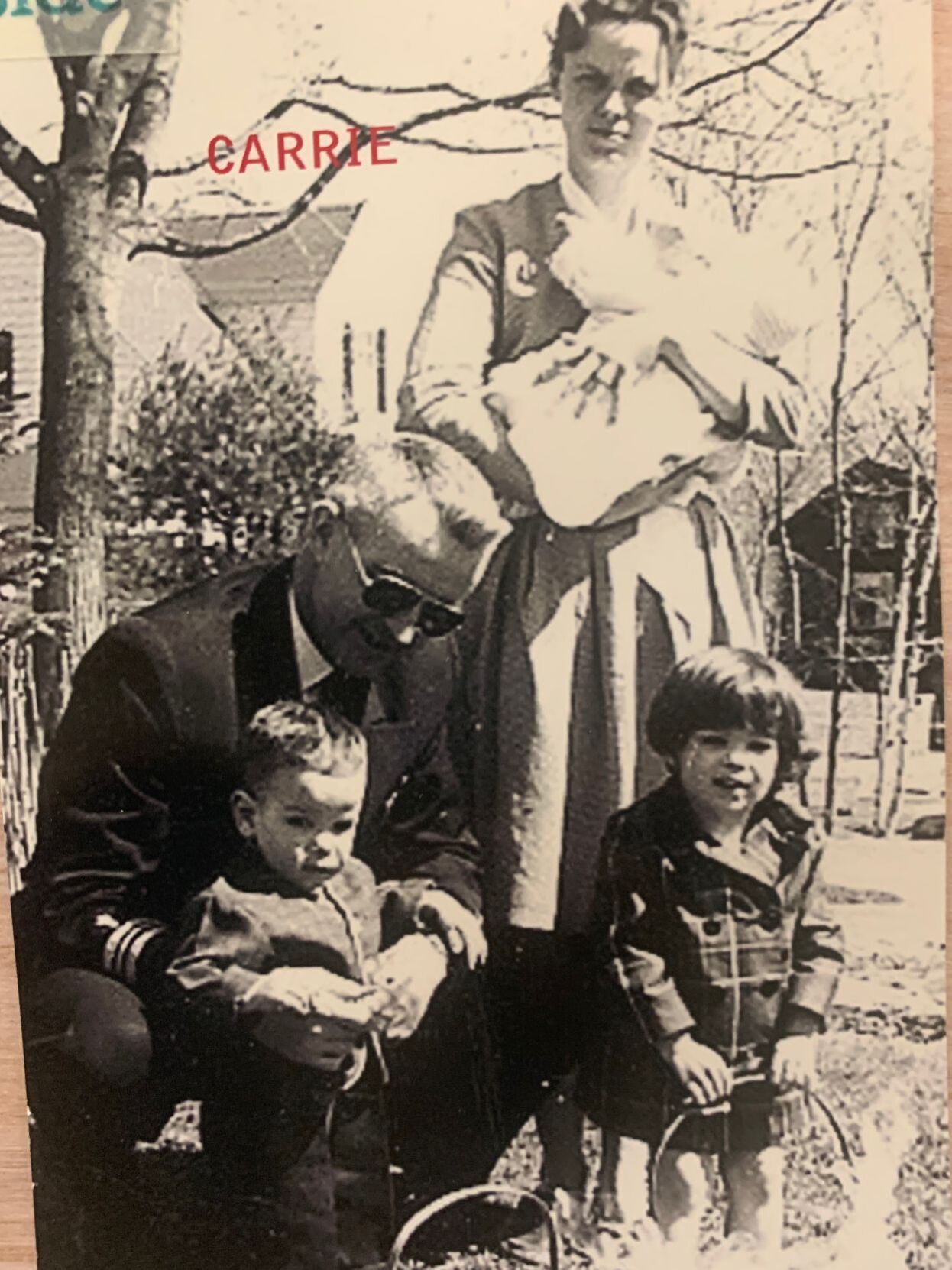 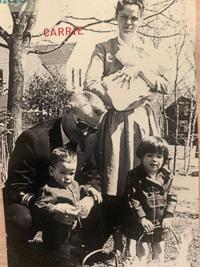 Carrie Dabruzzi and her three small children met with the Portsmouth Naval Shipyard chaplain on Easter Sunday 1963, four days after her husband, Samuel, was lost aboard the USS Thresher on April 10. 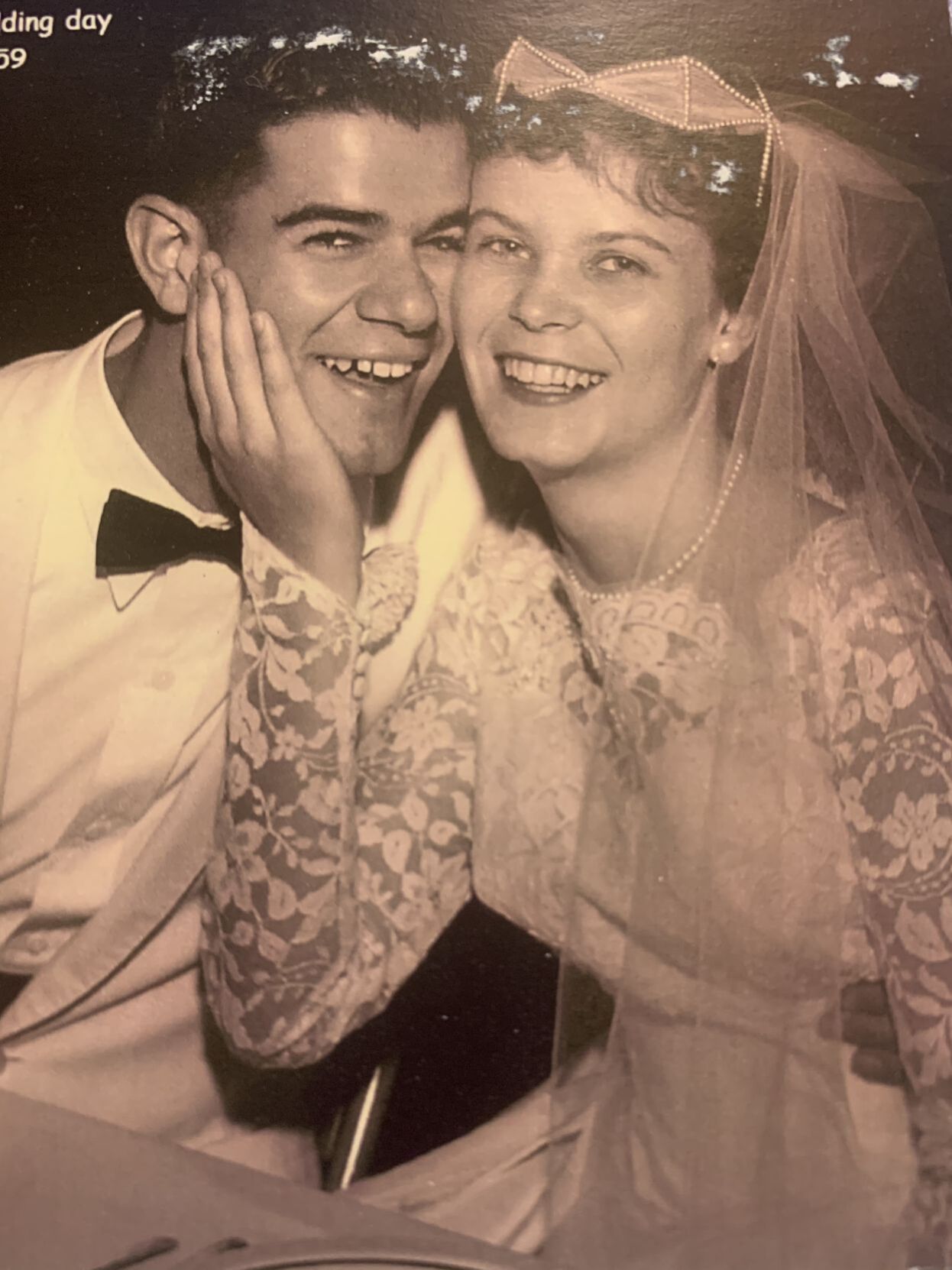 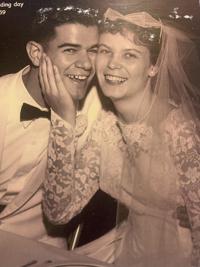 Samuel and Carrie Dabruzzi were married in 1959 and had three children. He died on USS Thresher on April 10, 1963. 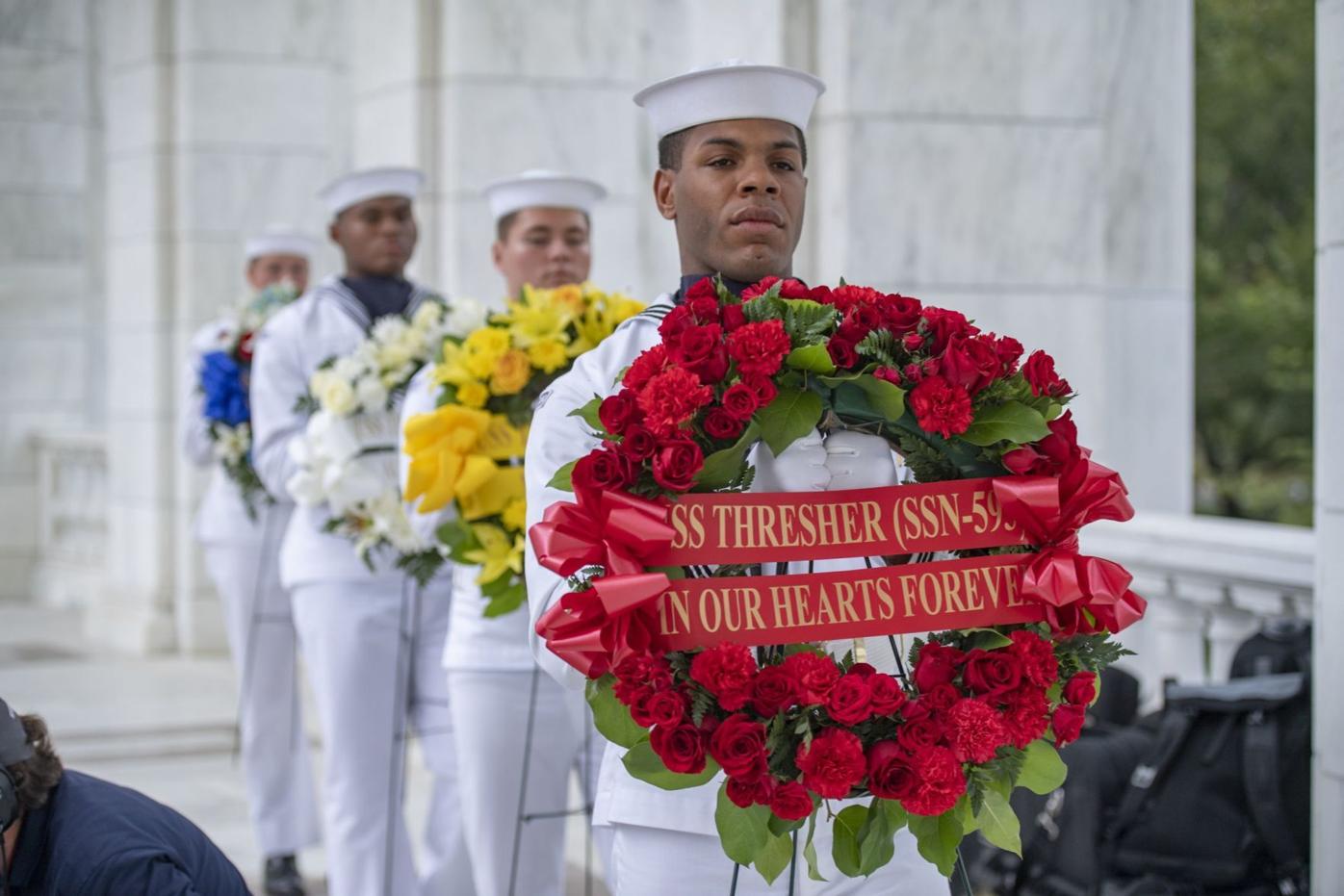 Sailors from the U.S. Navy Ceremonial Guard participate in a wreath-laying procession during the dedication of the USS Thresher National Commemorative Monument at Arlington National Cemetery in September 2019.

Carrie Dabruzzi and her three small children met with the Portsmouth Naval Shipyard chaplain on Easter Sunday 1963, four days after her husband, Samuel, was lost aboard the USS Thresher on April 10.

She remembers her parents were letting her sleep in their bed because she was sick. The telephone rang in the kitchen and she heard her mother answer it. Then: “She was screaming,” she said.

The call was from the Navy, informing the family that the USS Thresher — the submarine on which Joy’s dad, Walter “Jack” Noonis, served as chief radioman — was lost at sea.

The nuclear-powered attack submarine, with 129 men on board, went down off the coast of Massachusetts on April 10, 1963, during the height of the Cold War. The Thresher was the first of her class, the pride of the Portsmouth Naval Shipyard.

The families of the crew had no bodies to bury, no funerals to attend, no graves to visit. The answers lay on the ocean floor with their loved ones. The Navy investigated the accident, but the records remained classified for decades.

Last week, the Navy began releasing declassified documents about what happened to the doomed sub and her crew.

MacMillan, who grew up in Portsmouth and now lives in Brentwood, said the records seem to show that no one thing caused the Thresher tragedy but rather “the cumulative effect” of several things. “I think you just have a domino effect,” she said.

“I just don’t think that the ship was ready,” she said.

When the Thresher was lost, her mother — suddenly a widow with four children under the age of 10 — was distraught, MacMillan said. “The memories are bleak,” she said.

To this day, MacMillan is uncomfortable in tight spaces, and she dislikes gladiolas, which remind her of the funeral sprays that came to the house.

But MacMillan said the wives, parents and children left behind have lived up to the motto on the Thresher crew’s badge: “Vis tacita.”

“He’s the hero of all the Thresher family,” MacMillan said. “He didn’t have a dog in the fight, but he knew what was the right thing to do.

“We deserve to know the facts by now,” she said.

The release of the documents has been difficult for many Thresher families, said Kevin Galeaz, a submarine veteran from Hooksett who organizes an annual remembrance ceremony for the Thresher crew in Kittery, Maine.

Galeaz led the successful push to create a memorial for the Thresher crew at Arlington National Cemetery, which was dedicated a year ago. At the ceremony, Galeaz told the families in attendance: “Your prayers and your dreams have been answered.”

The release of documents is another step forward for the Thresher families. The first 300 pages released last week contain records of a court of inquiry that began just a day after the disaster. Hearings began at the Navy’s submarine base in Groton, Conn., and then moved to Portsmouth Naval Shipyard.

The court of inquiry found that “there was no evidence of sabotage or enemy action in connection with the loss of Thresher.” Instead, it found that the tragedy was due “in all probability” to an initial flooding “casualty” from an opening of between 2 and 5 inches in the engine room.

The flooding likely happened in the engine room when the Thresher was at test depth, the panel concluded. That caused the main coolant pumps to slow or stop, which would have triggered an automatic reactor shutdown. As the submarine sank, the hull imploded, killing all on board.

The court also pointed to “inadequate operating procedures with respect to minimizing the effects of a flooding casualty and the loss of reactor power” and “a deficient air system, susceptible to freeze-up.” It noted that key personnel, including the commanding officer, had been changed a few months before the accident.

Dean Axene, the former commanding officer of the Thresher, testified at a hearing on Saturday, April 13, 1963, at the shipyard. He told investigators that the Thresher’s crew previously had conducted a deep dive “under virtually identical conditions with the dive on which she apparently was lost.”

Before it reached the test depth, instruments indicated that something was wrong, he said, so the dive was terminated and the sub returned to the shipyard. Engineers determined that “the trouble was not with the ship; it was with instrumentation,” Axene said.

The submarine also had been struck by a tug that was guiding it into berth at Cape Canaveral, Fla., the year before the disaster, putting a hole in one of the main ballast tanks. But the hull’s integrity was not affected, Axene told investigators, describing it as “of nuisance value but very superficial.”

“There was no doubt in my mind, and I think this is true generally with everyone that served in Thresher, that she was far and away the best attack class submarine that our Navy had produced,” Axene told the court.

Some members of the doomed crew had expressed concern about the ship’s readiness, according to the records.

Joseph Shafer lost two brothers, both electrician’s mates, on the Thresher. He told investigators they had concerns about some of the sub’s components.

“These two boys were strictly Navy; they never said anything that would be classed as detrimental in any way. It was only an attitude that seemed to grow in one direction, and it progressed and got to the degree where they were more or less kidding each other about it,” he told the court.

But Shafer, himself a Navy veteran of World War II, said his brothers, Ben and John, were enthusiastic about what they were doing. “They just were both dedicated to the service and they had no other interests. They wanted to be together,” he said. “I don’t mean that they wanted to die, but they wanted to be on that ship.”

Lindstrom was 2½ years old when her father, Samuel J. Dabruzzi, died on the Thresher, so she doesn’t really remember him. Nicknamed “Smilin’ Sam” by his crewmates, Dabruzzi, a reactor operator, was 26 years old.

Her mother, Carrie, was 22 and had three children under 3 when the Thresher was lost. Lindstrom said her mother has told her that her dad was scared when he said goodbye that last time. “The day he left, he held my mom really tight,” she said.

He showed his young wife the insurance papers and told her “something was wrong with the sub,” Lindstrom said. She has since heard similar stories from other relatives of the lost crew.

After the tragedy, Dabruzzi’s young widow spent days driving around with her three small children in the car. She returned to the cemetery overlooking the bay where she used to watch for her husband’s ship to return.

“She was going up there to sit like she was waiting for the submarine to come back,” Lindstrom said. “And it wasn’t coming back.”

Lindstrom has since settled in Wisconsin, but she returns frequently to attend the Thresher memorial services. She and other family members went to Arlington for the dedication of the memorial there.

Reading the documents has been both heartbreaking and healing, she said. “To me, it’s validating what happened and my dad’s feelings,” she said. ”And how unbelievably brave those guys had to be, knowing what they were facing that day but still packing their lunch and going to work.

“They were all afraid they weren’t coming home. And they didn’t.”

Lindstrom was struck by a long list of deficiencies listed in the documents released so far: problems with valves, pipe joints and the ship’s high-pressure air systems. As she read the records, she said, “I was angry. I was hurt. I was sad that this even happened.”

But she said, “The healing part is seeing what the Navy put together after that to avoid it from happening in the future.”

That 1963 court of inquiry concluded that in light of what happened to Thresher, “There is a need to re-emphasize and improve, where indicated, the quality assurance program in shipbuilding and repair yards.” It listed dozens of areas of recommended improvements.

Two months after the Thresher was lost, the Navy created the SUBSAFE program, a quality assurance and certification process for submarines, with an annual training requirement that includes reviews of past failures such as the Thresher.

That is the true legacy of the lost crew, Navy veteran Galeaz said. As a submariner, he said, “We owe our lives to these guys.”

“Because of the submarine safety program, every time I dove on my submarine, I got to come home to my wife and my daughter,” he said.

Before the Thresher disaster, he said, the Navy was losing an average of one submarine every three years “to non-combat related incidents.” Since then, the Navy has lost only one submarine: The USS Scorpion, which had not completed the SUBSAFE certification process, sank in the Atlantic in 1968 with a crew of 99.

It’s not just submarines, Galeaz said: After the Columbia space shuttle disaster, NASA consulted with the Navy about SUBSAFE, in an effort “to help them change their culture.”

Galeaz said he is committed to making sure the sacrifice of the Thresher crew is not forgotten. It’s why he organizes the annual remembrance in Kittery and raised funds for the Arlington memorial. “My goal … is to touch the lives of the generations that are responsible for maintaining this legacy of submarine safety, to prevent this from ever occurring again,” he said.

The SUBSAFE program, Brentwood’s MacMillan said, “means everything to the Thresher family.”

“Because that is the only way that we can say they did not die in vain,” she said. “It means everything that no other family has to go through this.”

As difficult as it is to read the newly released records, Vivian Lindstrom said learning what the Navy did to prevent another disaster has left her in “a better place.”

“I’m angry and hurt that my dad had to pay that price, but he served because he wanted to protect this country. So this was his way,” she said. “To see it in black and white, I think has helped me.