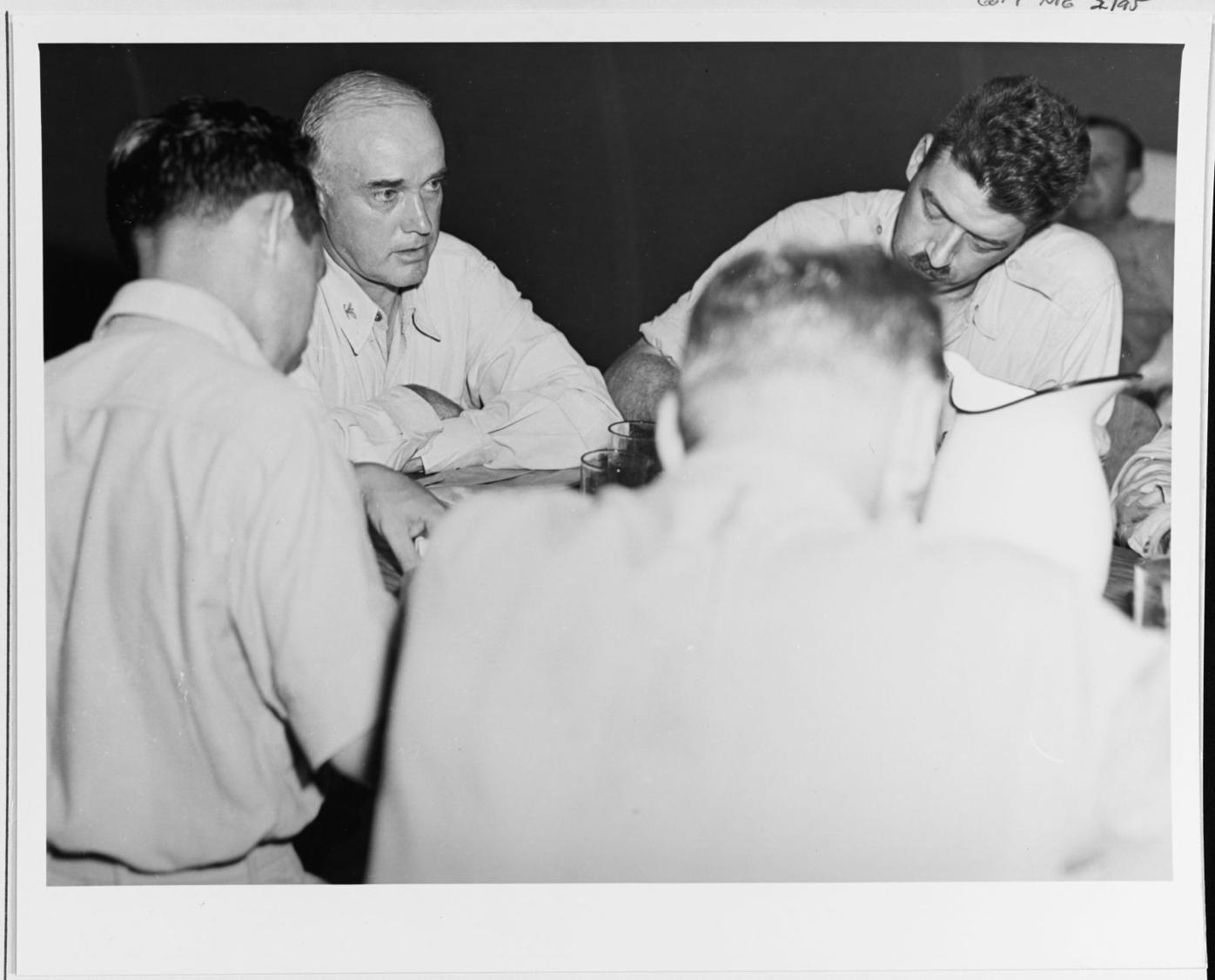 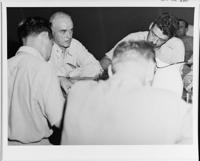 USS Indianapolis Commanding Officer, Captain Charles B. McVay, III, tells war correspondents on Guam about the sinking of his ship. MUST CREDIT: Official U.S. Navy Photograph, now in the collections of the National Archives 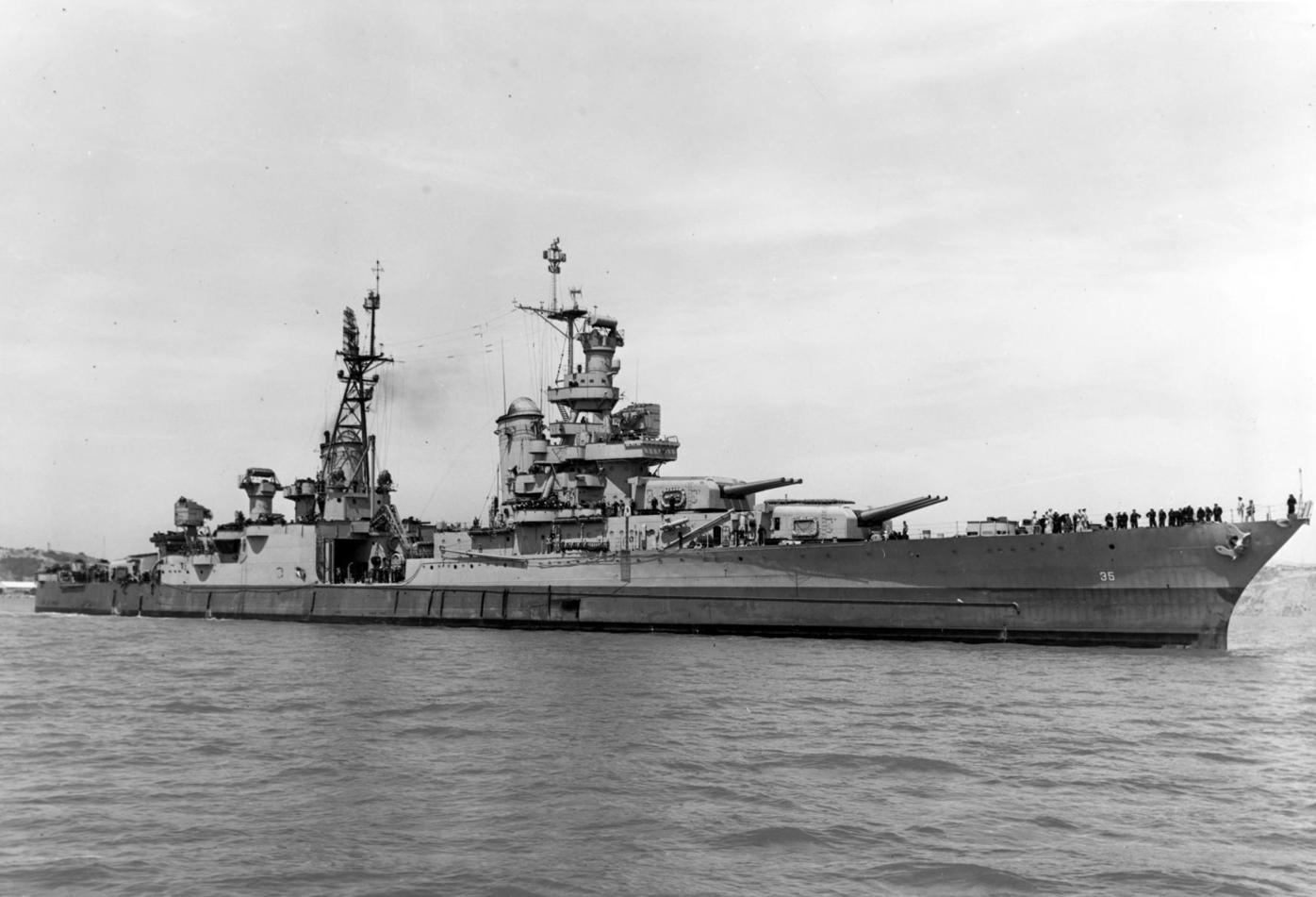 The USS Indianapolis off of Mare Island on July 10, 1945. MUST CREDIT: National Archives. 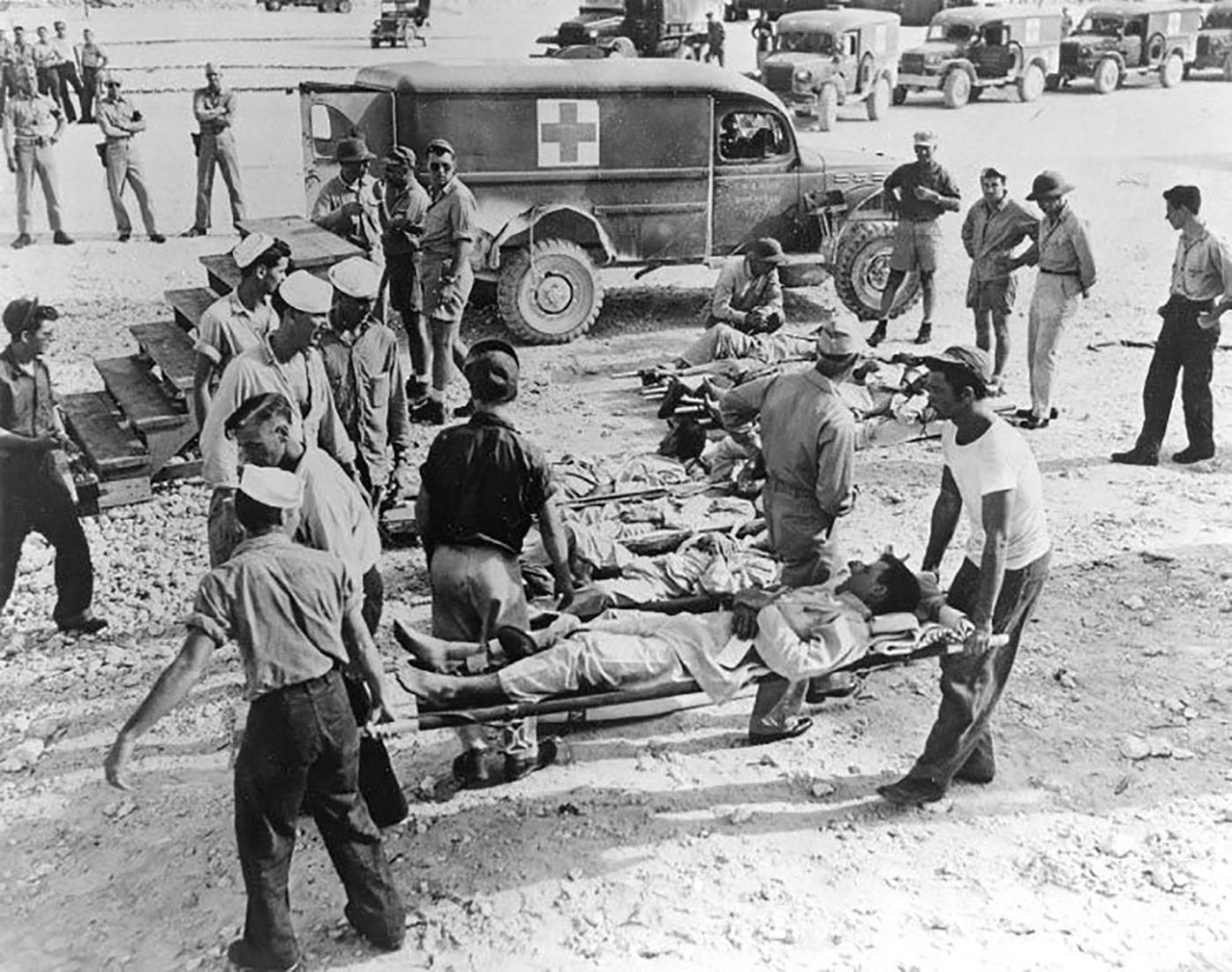 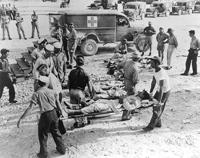 Survivors of the USS Indianapolis attack in Guam after being rescued in 1945. MUST CREDIT: U.S. Navy

USS Indianapolis Commanding Officer, Captain Charles B. McVay, III, tells war correspondents on Guam about the sinking of his ship. MUST CREDIT: Official U.S. Navy Photograph, now in the collections of the National Archives

The USS Indianapolis off of Mare Island on July 10, 1945. MUST CREDIT: National Archives.

Survivors of the USS Indianapolis attack in Guam after being rescued in 1945. MUST CREDIT: U.S. Navy

Just 34 days before the end of World War II, a U.S. Navy cruiser was torpedoed by a Japanese submarine and sunk in the Philippine Sea.

The USS Indianapolis had been the ship of state of President Franklin D. Roosevelt and had just delivered core components of the Hiroshima-bound atomic bomb "Little Boy" off the coast of Japan four days earlier.

After unloading her top-secret cargo at Tinian and then making a quick stop in Guam to await further orders, the crew of the Indy were soon bound for the Philippine island of Leyte, unaware that their location had just been discovered by an enemy submarine.

A Japanese sonar man had picked up on the sound of rattling dishes in her kitchen from some six miles away. The submarine began stalking her through the water until it was close enough to engage.

The sub's commanding officer, Mochitsura Hashimoto, gave the order to fire six torpedoes into her side at 12:04 a.m. on July 30, 1945. Two of the torpedoes hit their mark, and it took the Indy just twelve minutes to capsize and sink, forever entombing some 300 of her 1,195-man crew 18,044 feet beneath the surface of the moonlit water.

For the next five days, the nearly 900 sailors who had survived the sinking found their numbers whittled down as crew member after crew member fell victim to saltwater poisoning, drowning, delirium and shark attacks. Only 316 survived the horrific ordeal.

When the survivors were first spotted on the fourth morning by 24-year-old U.S. search and reconnaissance air pilot Chuck Gwinn while he was looking for enemy vessels in the area, they had drifted apart from each other and were found in several groups across nearly 200 miles of ocean.

Their collective rescue took about 24 hours to complete - leaving some survivors in the water for five harrowing days. One of the discovered clusters of men contained the Indy's captain, Charles McVay.

Despite the nightmare he'd just experienced and survived at sea, Captain McVay soon found himself in a different kind of fight - this one with the United States Navy.

The Navy had bungled many things regarding the Indianapolis and they knew it: They denied McVay the escort he'd requested for protection while traveling through enemy waters; they failed to respond to any of the distress signals sent from the Indy that listed its coordinates in the final moments of its sinking (the Navy has since disputed receiving any distress signals, though multiple servicemen claimed to have received them); they failed to recognize or report that the Indy had not arrived at Leyte when it was scheduled to; and they had provided McVay with an incomplete intelligence report in the first place - withholding the vital information they had come by through a top-secret code-breaking program that confirmed enemy submarine activity along the route the Indy would be taking to Leyte.

To prevent such blunders from getting out and possibly overshadowing the triumphant news of the likely ending of the war (the first atomic bomb was dropped on Hiroshima just two days after the survivors were rescued with "This one is for the Boys of the Indianapolis" written on its side), the Navy ordered a news blackout about the incident once the survivors were sequestered and convalescing on a nearby island.

In Washington, the Navy had already begun preparing for a court inquiry as requested by Admiral Chester Nimitz. Nimitz's inquiry requested an investigation of the cause of the sinking, the culpability of any servicemen involved, and how the survivors had been discovered entirely by accident after the base at Leyte failed to report the ship as missing.

In the end, a few servicemen were reprimanded for their respective roles in not recognizing the Indy's absence, but only McVay would be taken to trial and charged for the sinking of the ship once he arrived back on American soil.

The Navy all but spelled out their reasons for doing so in a letter their judge advocate general (JAG) sent officials at the time: "Full justification for ordering the trial...springs from the fact that this case is of vital interest not only to the families of those who lost their lives, but also to the public at large."

In other words, "the Navy needed someone to blame for what The New York Times had already called 'one of the darkest pages of our naval history,'" said Doug Stanton, author of "In Harm's Way: The Sinking of the U.S.S. Indianapolis and the Extraordinary Story of Its Survivors."

Initially, Navy prosecutors tried to charge Captain McVay with two counts of negligence: "failure to abandon ship in a timely manner" and "hazarding his ship" by failing to steer her in diagonal lines, a since-abandoned defensive maneuver known as zigzagging.

But the prosecutors soon realized they could not prove the first charge because the ship sank so quickly. So they put all their effort into making the second charge stick. McVay had already admitted that the Indy had not been zigzagging at the time of the attack, citing weather conditions. The Navy insisted on proving that his lack of doing so had been consequential.

Among the list of witnesses the prosecution called to testify against McVay was none other than the submarine commander who had sunk the Indy in the first place: Commander Mochitsura Hashimoto. The decision caused an uproar among members of the press and politicians alike.

"American military prosecutors calling Hashimoto to testify against McVay regarding the loss of his ship would have been as outrageous as the New York City district attorney calling a 9/11 hijacker to testify against the NYC fire commissioner regarding the loss of the World Trade Center," said Lynn Vincent, co-author of "Indianapolis: The True Story of the Worst Sea Disaster in U.S. Naval History and the Fifty-Year Fight to Exonerate an Innocent Man."

Nonetheless, Hashimoto had been asked to testify at the court martial and he obeyed - just not in the way prosecutors had hoped he would.

During his testimony, he was asked to confirm that the Indy had not been zigzagging at the time he fired upon her - a point he readily conceded. But he went on to seemingly mock the maneuver by explaining that zigzagging would have made "no change" in the way he fired the torpedoes and that he would have sunk the defenseless ship either way.

Despite the unexpected blow that Hashimoto's testimony had been to the prosecution, Captain McVay was still convicted of hazarding his ship by failing to zigzag.

"The conviction meant that of the almost 400 U.S. captains whose ships had been sunk during the war, McVay was the only one to have been court-martialed," Stanton said. Indeed, he was the only captain in the entire history of the Navy to be court-martialed whose ship was sunk by an act of war.

That distinction stayed with McVay for the rest of his life as he endured anguished letter after anguished letter ("Hate mail," Indy survivor Granville Crane Jr. later called it), from the families of the fallen sailors whose deaths had been blamed on him. "He read every letter he received and took them all personally," Stanton said.

In the end, McVay took his own life on November 6, 1968 - a gift from his father of a toy sailor clutched in his hand when he died.

His death marked a turning point for the remaining Indianapolis survivors as they had never held their captain responsible for the sinking and resented the way he'd been made to carry that unnecessary burden. "Once the captain was court-martialed, my first thought was how can we get these guys for doing this?" Twible later recounted.

Indeed, for more than fifty years, the survivors had tried and failed to get the Navy to reverse the court-martial and to clear their captain's name. At last, they decided to try another way: by making his exoneration a matter of law by appealing directly to the United States Congress.

The survivors gathered signatures and lobbied members of Congress in visit after visit to Washington. Finally, New Hampshire Sen. Robert Smith agreed to champion their cause, and he introduced an exoneration resolution that, as he put it at the time, "expresses a sense of Congress that Captain McVay's court martial was morally unsustainable."

Smith's resolution wasn't enough, however, because it was up to Sen. John Warner, R-Va., the chairman of the Senate Armed Services Committee and former Navy secretary, to decide whether to take the exoneration resolution to the Senate floor for a vote.

For several months, Vincent said Warner had opposed the measure and been "utterly immovable" until he received a letter from the most unlikely of people: Mochitsura Hashimoto.

Once again, 54 years after he'd testified at McVay's court martial, the submarine commander was coming to his old enemy's defense. Hashimoto told Warner that he wanted to join the "brave men who survived the sinking of the Indianapolis ... in urging that your national legislature clear their captain's name." He added: "Our peoples have forgiven each other for that terrible war and its consequences. Perhaps it is time your peoples forgave Captain McVay for the humiliation of his unjust conviction."

His heartfelt words were enough to soften Warner's resolve. "With the addition of Hashimoto's voice," Vincent said, "it was as though the entire matter had reached a kind of cosmic critical mass, and Warner realized it was time to finally lay it to rest."

In a show of support for the survivors, Hashimoto's daughter, Sonoe Hashimoto Iida, and his granddaughter, Atsuko Iida, bravely attended the 60-year anniversary of the ship's sinking in 2005. Though nervous about how they may be received by the survivors who had been meeting together on the anniversary of the Indy's sinking every year since 1960, they felt connected to the men of the Indianapolis through their father and grandfather and wanted to attend.

Singing as one, the moment was a fitting demonstration of healing between two peoples who had once called each other "enemy" - brought together by their shared desire to vindicate an innocent man.

"The survivors had fought for fifty years to exonerate their captain," Vincent said. "In an ironic twist of history, the man who first put them in peril was the same one who came to their aid."