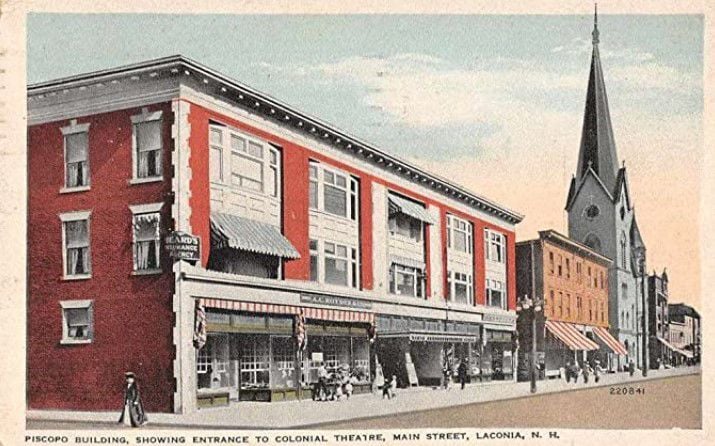 A vintage postcard shows Laconia’s Colonial Theatre, which is currently under renovation. 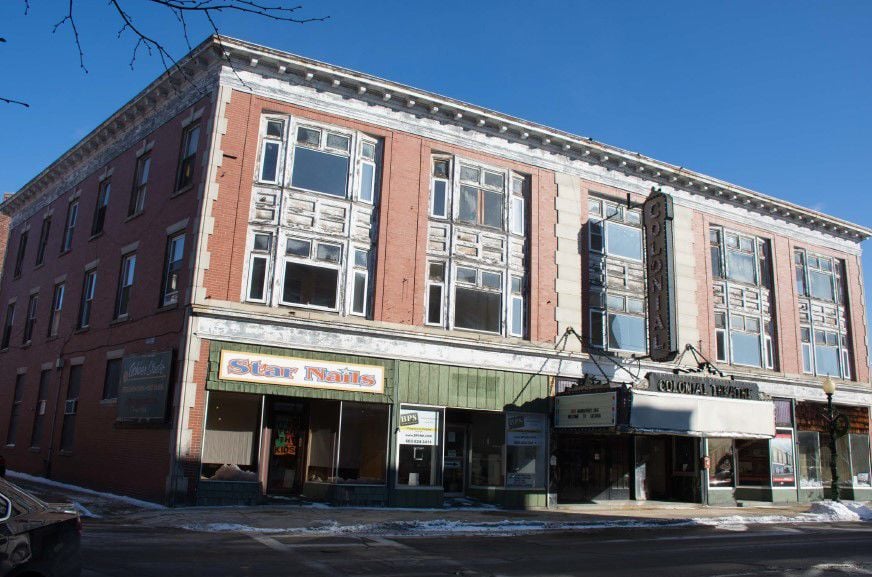 Laconia’s Colonial Theatre was built in 1914 by developer Benjamin Piscopo, a stone cutter from Italy who emigrated to Boston, and then moved to Laconia and developed a number of the city’s buildings. 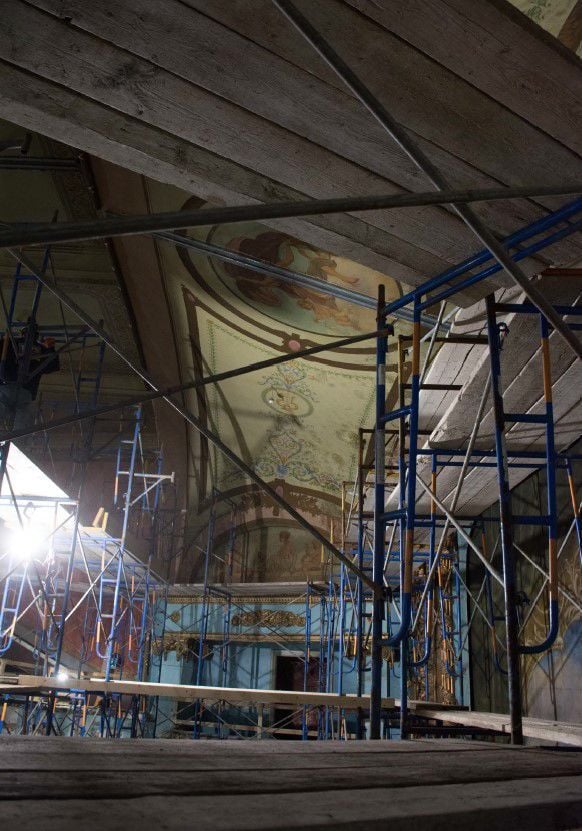 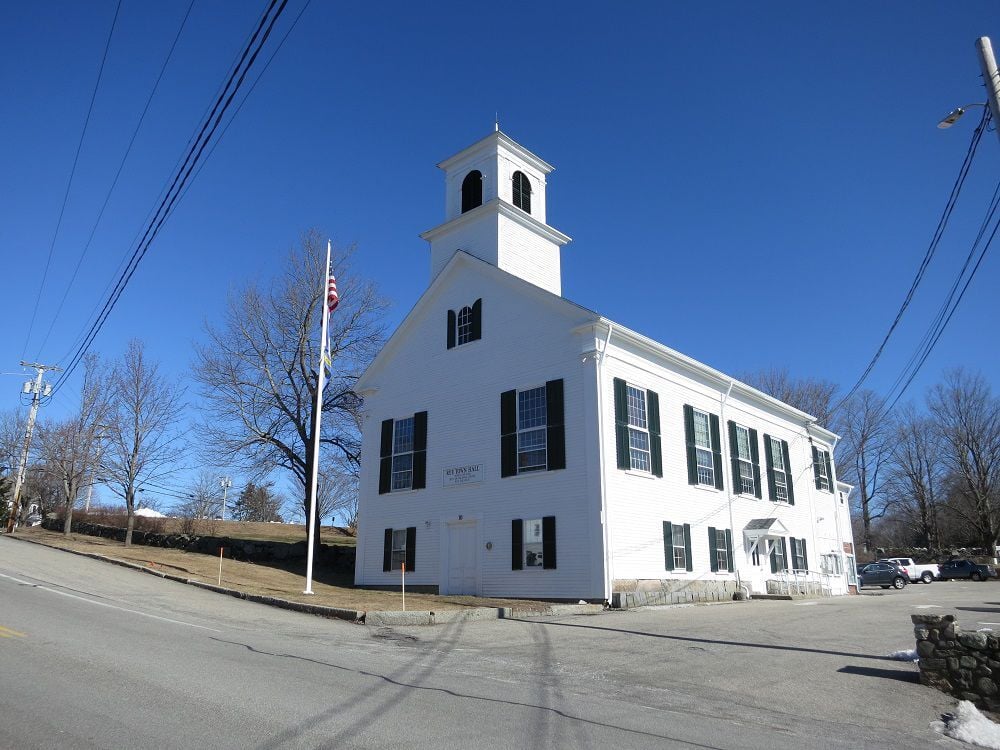 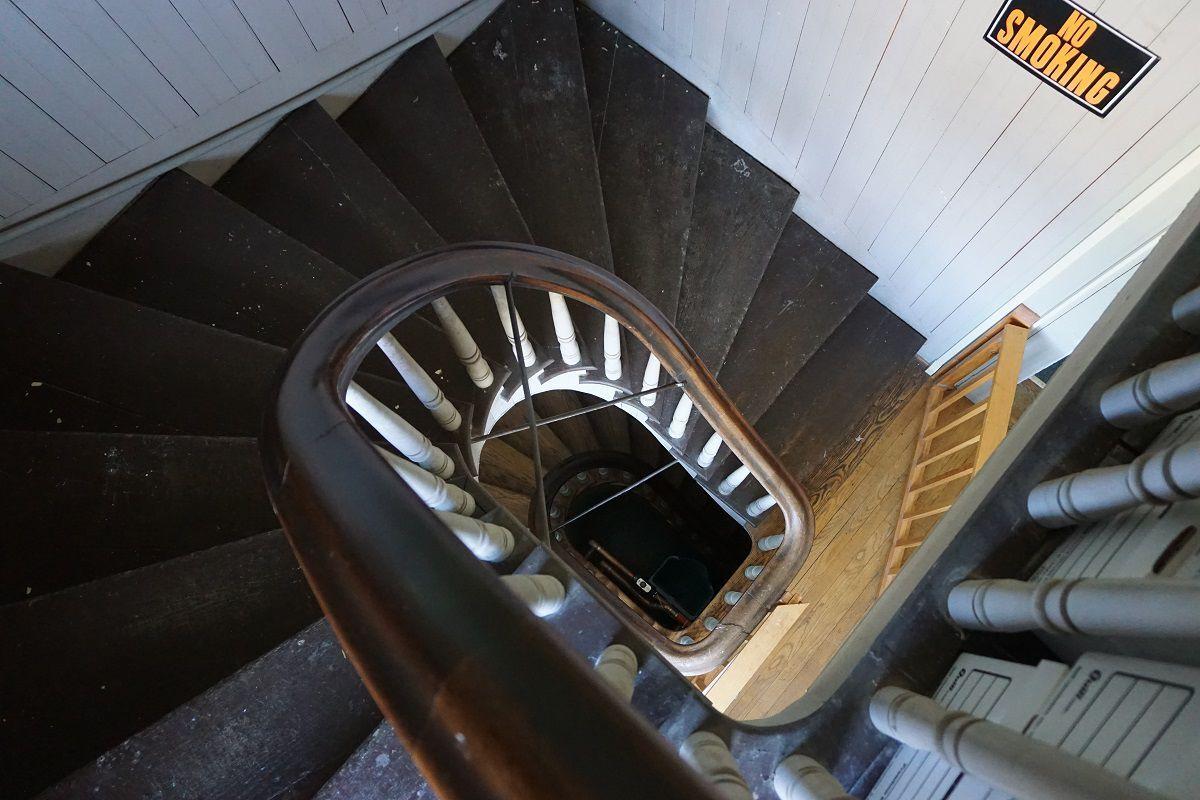 A pair of wide elliptical stairways in Rye Town Hall still have their original walnut handrails, round newel posts and turned balusters.

A vintage postcard shows Laconia’s Colonial Theatre, which is currently under renovation.

Laconia’s Colonial Theatre was built in 1914 by developer Benjamin Piscopo, a stone cutter from Italy who emigrated to Boston, and then moved to Laconia and developed a number of the city’s buildings.

A pair of wide elliptical stairways in Rye Town Hall still have their original walnut handrails, round newel posts and turned balusters.

The New Hampshire Division of Historical Resources announced Thursday that the Colonial Theatre complex in Laconia and Rye Town Hall have been honored by the U.S. Secretary of the Interior with placement on the National Register of Historic Places.

The theater was highlighted for its architecture and as a center of entertainment and commerce from the time it was built in 1914 into the 21st century, according to a news release. Rye Town Hall’s architecture and its role in local politics and government were also cited by state and federal officials.

“The Colonial Theatre complex is the largest of several mixed-use blocks that were built in downtown Laconia in the first quarter of the twentieth century,” the news release said. “With its primary entrance on Main Street, the complex includes three sections: the Piscopo Block, Colonial Theatre and Canal Street Annex.”

The complex’s most prominent feature is the theater’s 1930s marquee, which hangs over the main entrance of Piscopo Block and is topped by a two-story blade-style sign that spells out “Colonial.”

The theater’s entrance and lobby retain a majority of their original historic finishes and decorative details, including a pair of 12-light mahogany-stained birch doors with brass hardware, Vermont marble wainscoting, terrazzo floors and ticket booths with arched windows.

“The theater space still has its original layout, with an overhanging balcony, orchestra pit and two-tiered box seating at the front of the auditorium,” the news release said.

Restored details include the original gilded plaster ornaments, frescoes, high coffered ceiling decorated with images of high arts and floral designs, woodwork and a “1914” medallion centered above the stage.

Benjamin Piscopo, the original developer of the Colonial Theater complex, was a stone cutter from Italy who emigrated to Boston. He became a successful real estate developer and moved to Laconia, where he developed a number of the city’s business buildings and was an investor in the Tavern Hotel.

The complex has undergone several changes, including converting the theater space into a five-screen multiplex in the 1980s and alterations to the layout of the office and residential spaces on the second and third floors of the Piscopo Block.

Rye Town Hall was originally a 1½-story church built by the Methodist Society in 1839, it was elevated and turned into a 2½-story town hall by the Town of Rye, which purchased it in 1873.

“The building’s Greek Revival architectural details include its broad gable front with a recessed panel door, as well as corner pilasters reminiscent of columns,” the news release said. “While a double-arched window in the attic reflects the more ornate Italianate style that was popular at the time of the renovation, the building’s overall simplicity shows the frugality of both the congregation and the rural community.”

Rye Town Hall’s interior retains many of its historic features. The first floor’s original beadboard walls and six-panel solid wood doors are connected to the second floor by a pair of wide elliptical stairways, added when the town purchased the building, that still have their original walnut handrails, round newel posts and turned balusters.

A large elevated stage, framed by decorative panels and with a bowed front, was added to the second floor circa 1875. Settees purchased for that space are currently in use on the first floor.

“Payment records for bedding and heavy padlocks indicate that there may have been jail cells in the basement, as was often the case with local town halls,” the news release said.

A two-story addition to the rear of the building in 1890 added a rudimentary kitchen and toilet, as well as more backstage space for the stage. In 1974, a smaller addition behind the 1890 addition provided more space for municipal functions.

“Rye Town Hall was the center of community life from late 19th through the first half of the 20th century. Dances, concerts, whist parties, singing schools, oyster parties and immunization clinics are some of the wide variety of events took place there,” the news release said.

Being named to the National Register of Historic Places is a required step for a property to be eligible for federal tax incentives for renovation projects, but does not impose new or additional restrictions on its use, the state Division of Historical Resources said in the news release.

In New Hampshire, listing to the National Register makes applicable property owners eligible for grants such as the Land and Community Heritage Investment Program or LCHIP (lchip.org) and the Conservation License Plate Program (nh.gov/nhdhr/grants/moose).

For more information, visit nh.gov/nhdhr or contact the Division of Historical Resources at 603-271-3583.

New Hampshire's 10 conservation districts are celebrating their 75th year in 2021 and are looking for historic, conservation-themed photos.

Penhallow House at Strawbery Banke to be restored

The Penhallow House at Strawbery Banke Museum in Portsmouth will be restored with a $125,000 grant from the Land & Community Heritage Investment Program.

Damage to elegant centerpiece is a monetary value killer

Dear Helaine and Joe: We believe we have a “bride’s basket.” It came to us from my grandmother, who was married in 1929. A corner of the bowl was broken, and my grandmother took it to a glass repairman who made the other corners match. The base is marked “Pairpoint C5560” plus a diamond shap…

EFFINGHAM – In what officials are calling “a pretty big deal” for this small community, the town and the Effingham Preservation Society have received a $165,000 Land and Community Heritage Investment Program matching grant to repair, restore and rehabilitate a very special building.