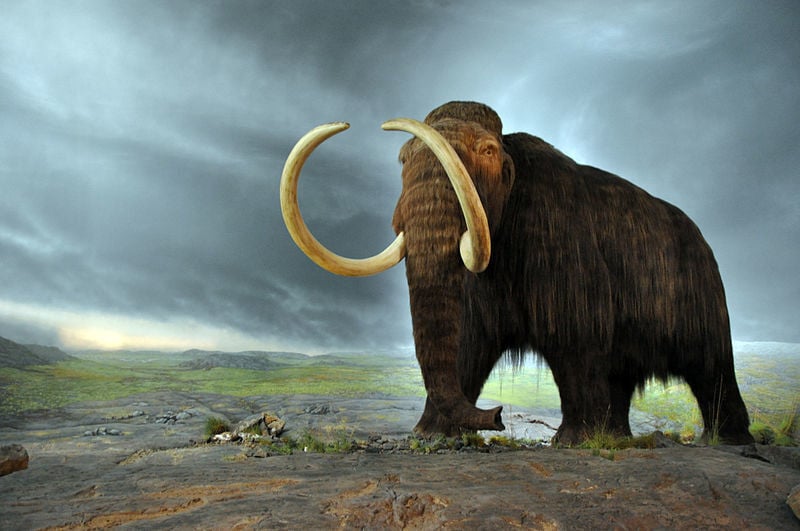 Woolly the Mammoth, a replica of the animal constructed with fiberglass tusks and muskox skins, has been a favorite of visitors to the Royal BC Museum for more than 40 years. The museum is in Victoria, British Columbia, Canada. 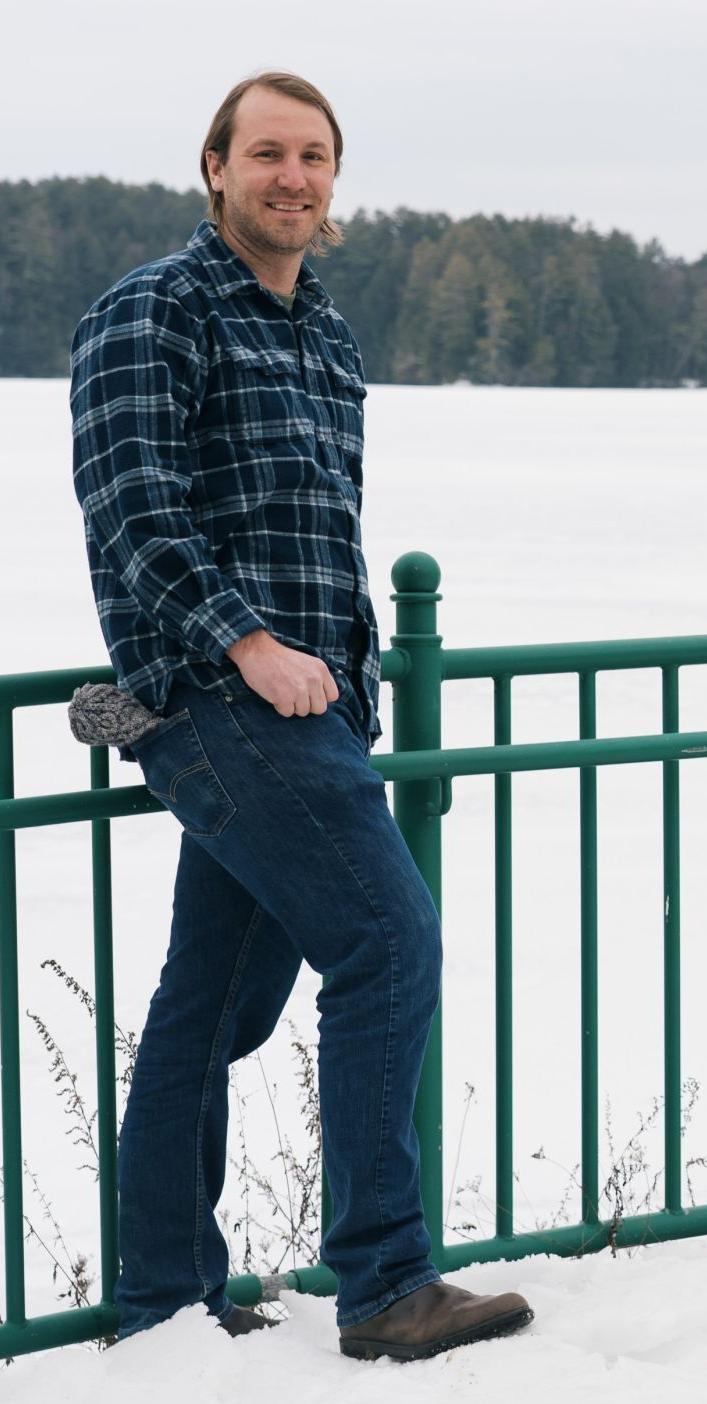 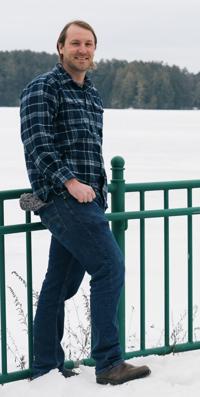 Nathaniel Kitchel, a postdoctoral fellow in archaeology at Dartmouth College, found the mammoth rib bone in the archived collection of the college’s Hood Museum of Art. 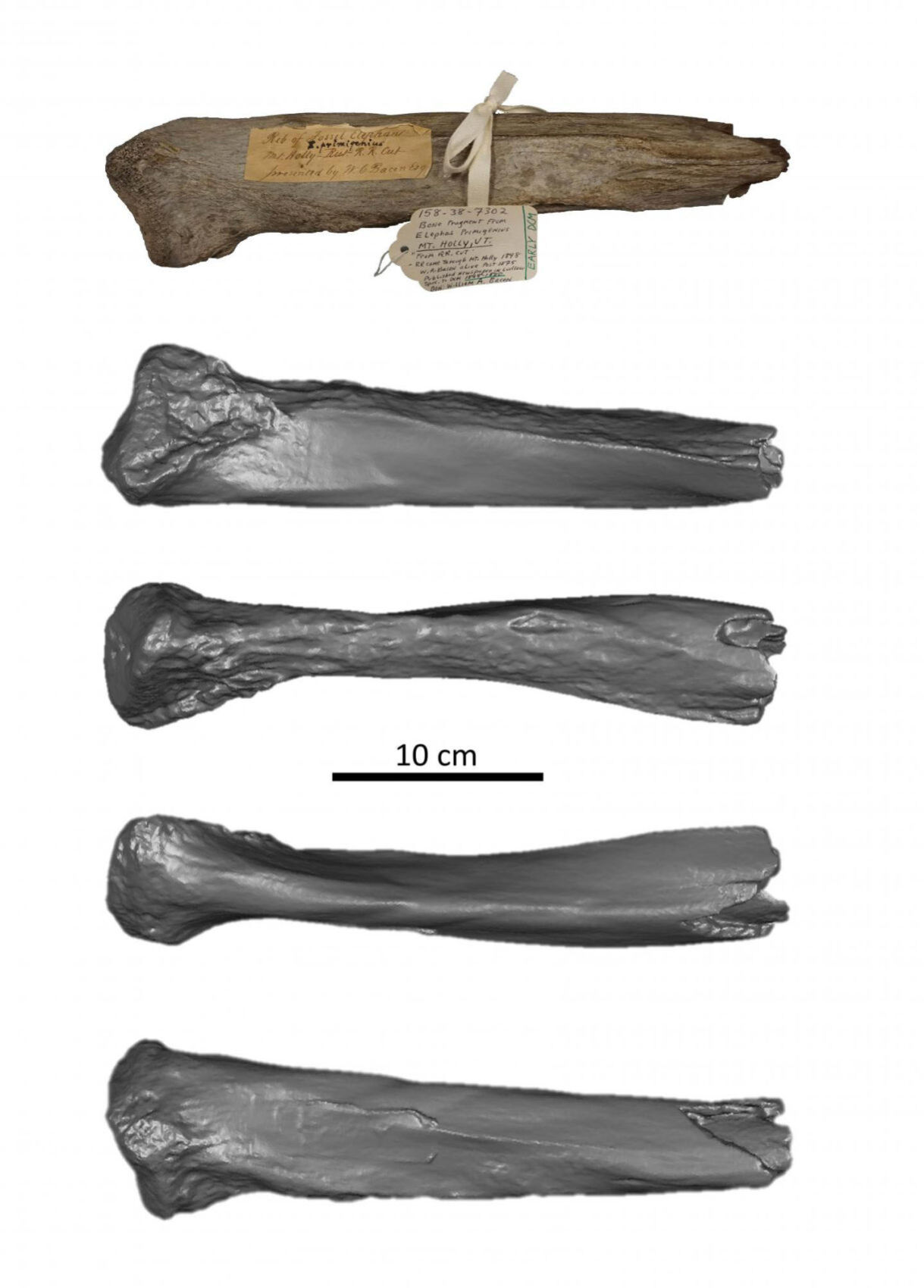 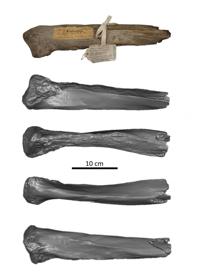 The Mount Holly mammoth rib fragment is housed at the Hood Museum of Art at Dartmouth. It was discovered in 1848 by workers building a railroad in Vermont.

Woolly the Mammoth, a replica of the animal constructed with fiberglass tusks and muskox skins, has been a favorite of visitors to the Royal BC Museum for more than 40 years. The museum is in Victoria, British Columbia, Canada.

The Mount Holly mammoth rib fragment is housed at the Hood Museum of Art at Dartmouth. It was discovered in 1848 by workers building a railroad in Vermont.

Nathaniel Kitchel was only hoping to find something that would interest his Dartmouth College students when he visited the Hood Museum of Art’s storage warehouse that winter’s day. “Really just to see what was there and if there was anything that struck my eye as particularly interesting,” he recalled.

What Kitchel found could change what we know about our earliest New England ancestors and the beasts that shared the landscape.

Kitchel, a postdoctoral fellow at Dartmouth’s department of anthropology, is an archeologist who studies the early humans who settled northeastern North America. He and his Dartmouth colleague, Jeremy DeSilva, just published a scientific paper that reveals that the woolly mammoth could once have shared these lands with the earliest humans to arrive here.

The story begins in December 2019, when Kitchel visited the Hood museum’s off-site storage facility to look over its collection of New England artifacts, which had been donated to Dartmouth many years ago.

Kitchel spotted a large bone — large enough to get his attention. There was a tag attached. When he turned it over, he read these words: Mount Holly, VT, and “fossil elephant.”

He didn’t jump up and down or shout to summon the curator, Kitchel said. “But the internal monologue was: Wow. OK. Wow,” he said.

Just a few weeks earlier, Kitchel had given a talk at the Mount Holly Community Historical Museum in his native Vermont. Mount Holly is where workers building a railroad in 1848 discovered fossilized partial remains of a mammoth preserved in a peat bog.

The find — a molar, two tusks and some bones — became known as the Mount Holly mammoth, and was later adopted by Vermont as its state fossil. (Incidentally, New Hampshire is one of only seven states without a state fossil, according to fossilera.com.)

At the Mount Holly museum, Kitchel had shared his opinion that it was unlikely that the earliest humans to arrive in New England had ever encountered mammoths or mastodons. “You might want to think that humans might have been around when this creature was living, but the best evidence we have right now indicates that that’s pretty unlikely,” he told the audience.

Now Kitchel was staring at a fossilized rib bone from the very mammoth he had been talking about. It was also the evidence that could prove him right — or wrong. “Famous last words,” he said.

Working with Dartmouth colleagues and Hood curators, he collected a tiny fragment from the rib bone and sent it off to a lab at the University of Georgia lab that specializes in radiocarbon dating, which determines how long an organism has been dead based on a radioactive isotope that decays over time.

Humans on the hook?

What makes the discovery so significant, Kitchel said, is what it contributes to a longstanding discussion about whether humans ever hunted these ancient elephants, known as proboscideans. In other parts of North America, there’s strong evidence they did.

That has led to scholarly arguments, he said, over “just what role humans had in the ultimate extinction of these animals.”

The arrival of the first people coincides with the mammoths’ disappearance, but there were other important factors, namely the ending of the Ice Age and the dramatic climate change that came with that.

The absence of proof that humans and mammoths were ever in this region at the same time has been part of the debate, Kitchel said. “If they didn’t overlap, you can’t blame humans.”

Now that his research has shown they likely did overlap, humans are back on the hook, he said, “with the major caveat that just because humans may have shared the landscape with these animals doesn’t mean that they necessarily hunted them.”

Hunting them would not have been an easy task. From what scientists have learned from their skeletons, mammoths were a third again as large as Asian elephants and could have weighed up to 20,000 pounds, Kitchel said.

Kitchel hasn’t weighed in on the debate. As an archaeologist who studies early people, he said, “It’s important to understand the creatures that they shared the landscape with, regardless of whether they were trying to eat them. Because it provides a fuller picture of what life might have been like back then.”

Mammoths on the move

The fossilized remains of the Mount Holly mammoth have a “storied history,” Kitchel said. “They did some traveling.”

“In 1848, paleontology in North America was in its infancy, and people were beginning to try to make sense of what the elephants were doing in various locations around North America,” he said.

When the Mount Holly mammoth was found, researchers from Harvard University traveled to Vermont to inspect the remains, and then brought them back to Harvard for study. One of the creature’s tusks was later returned to the University of Vermont and is now on permanent loan to the Mount Holly museum, Kitchel said.

The rest became part of a collection that was later sold to J.P. Morgan, the late-1800s financier, who sent them to the Museum of Natural History in New York City. That’s where they remained for more than 70 years before they were returned to Harvard, Kitchel said.

How the rib bone came to be stored at the Hood Museum’s warehouse is still a mystery. The attached tag had a name: William A. Bacon. Kitchel has since learned that Bacon was a lawyer and newspaper publisher who lived in Ludlow, Vt., in the early 1850s.

Back then, it was common “for people to try to acquire items like that for a cabinet of curiosities,” he said. In fact, that’s how many museums were created.

Doing the radiocarbon dating was only the first step in studying the newly discovered fossil. They want to confirm the results by sending a sample to a different lab.

Kitchel and his Dartmouth colleagues also are using ground-penetrating radar to explore the area where the mammoth was found. It’s unlikely they’ll find more remains, he said, but he’s eager to learn more about the environment that preserved the fossils for thousands of years.

Kitchel said he hopes that the new research will get others excited about the creatures that once roamed these lands.

Growing up in northern Vermont, he said, he knew about the Ice Age. “But the Ice Age animals, these megafauna, were always something I considered to be from somewhere else,” he said.

“I didn’t have any recognition, really, that those same almost mythical creatures — a mammoth, a mastodon — may have actually walked this same landscape that I did as a kid.”