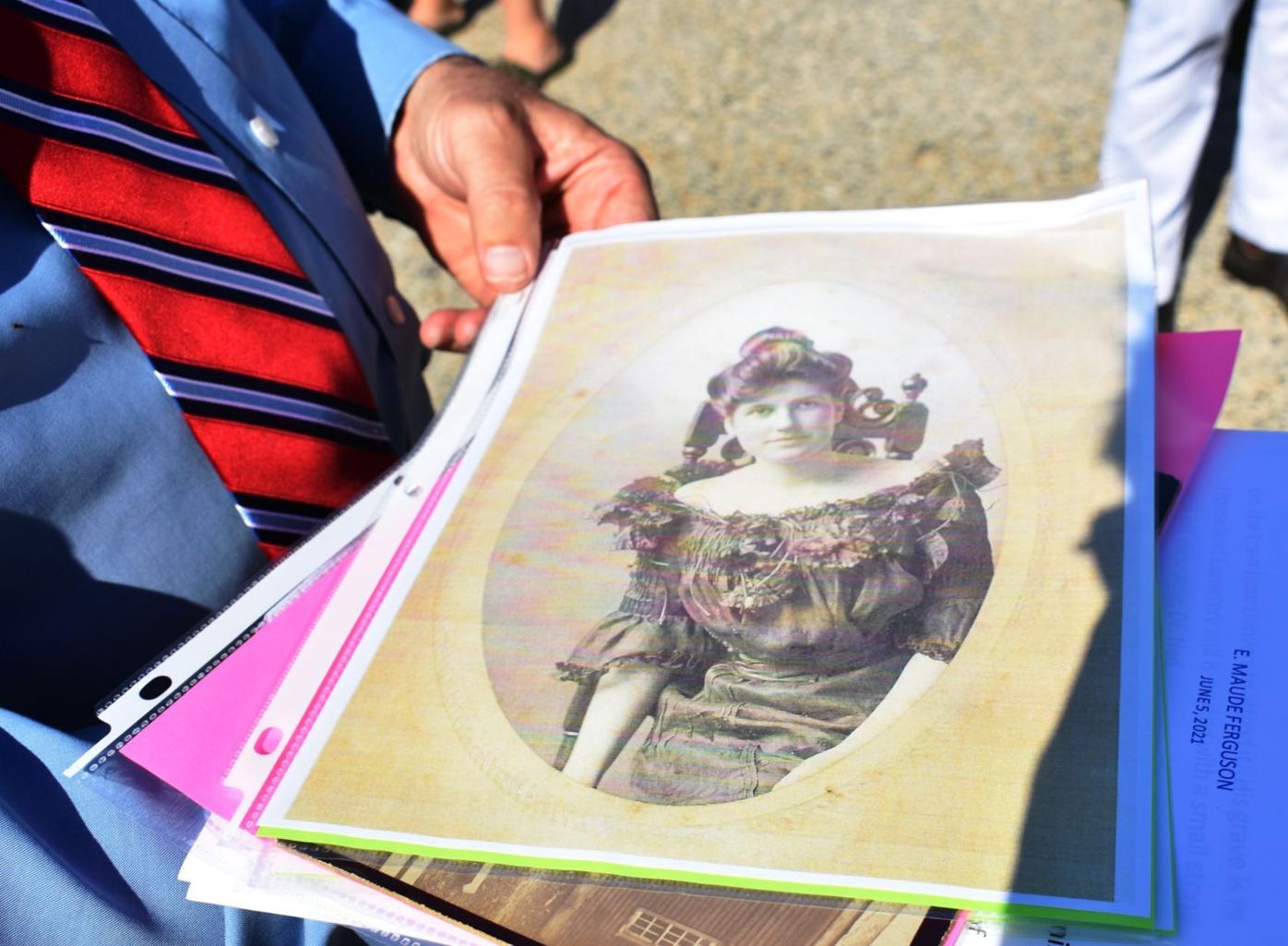 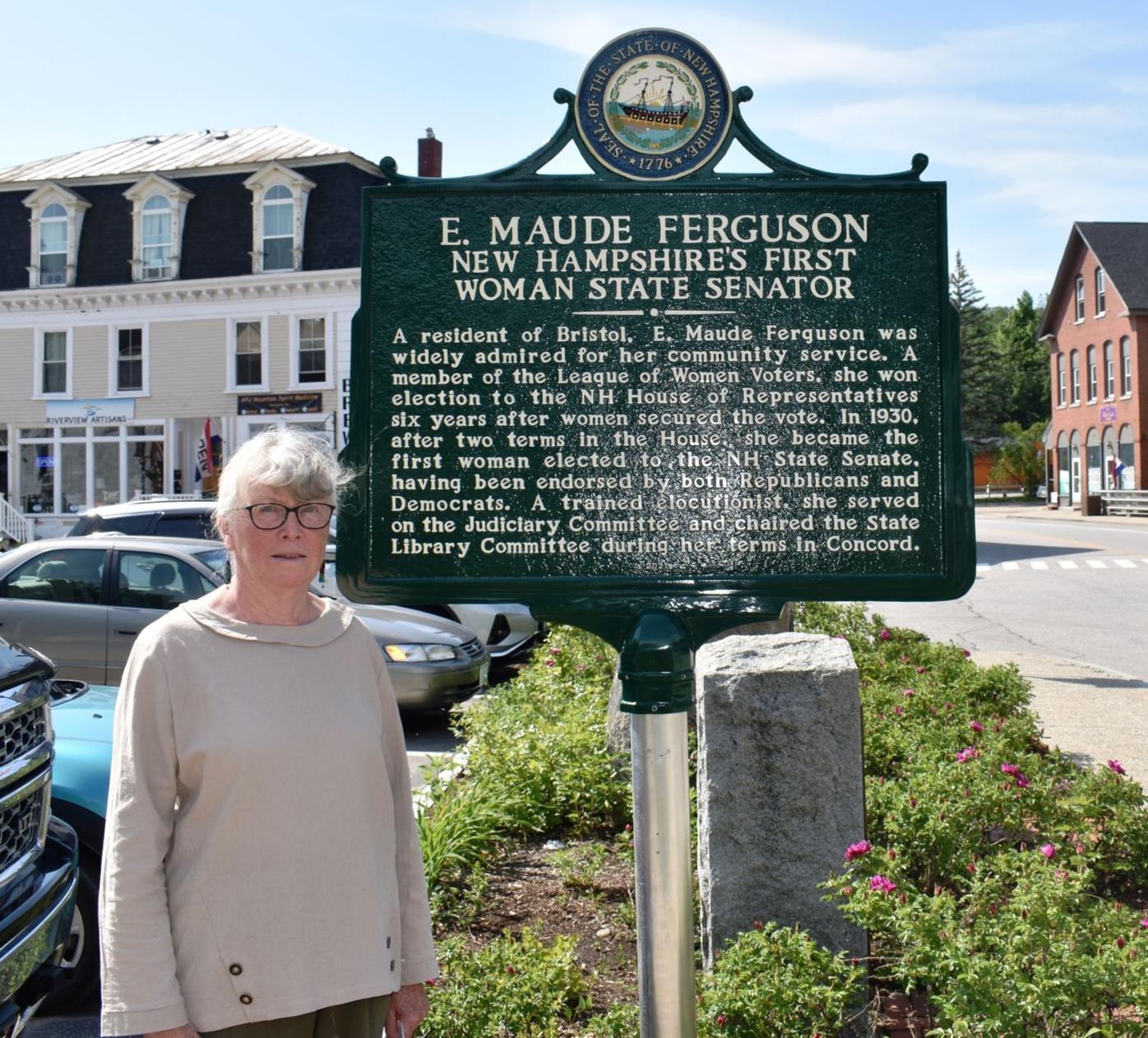 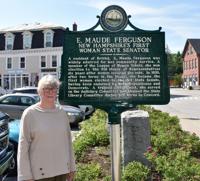 Lucille Keegan, president of the Bristol Historical Society, poses on Saturday in Central Square with the recently installed marker that honors E. Maude Ferguson, a Bristol resident who in 1930 became the first woman elected to the New Hampshire Senate.

Lucille Keegan, president of the Bristol Historical Society, poses on Saturday in Central Square with the recently installed marker that honors E. Maude Ferguson, a Bristol resident who in 1930 became the first woman elected to the New Hampshire Senate.

BRISTOL — New Hampshire’s first female state senator finally got her due in the small town she served nearly a century ago.

While E. Maude Ferguson (1882-1932) was the inspiration for a New Hampshire historical marker installed in Central Square, Bristol Historical Society President Lucille Keegan helped make it happen. To do so she worked with Rep. Ned Gordon, R-Bristol, chair of the House’s Judiciary Committee and the town’s longtime moderator.

Gordon, who spoke at Saturday’s unveiling, described Ferguson as a citizen who championed the rights of women in the state of New Hampshire and “a leader who cared about people and served them well.”

Ferguson had what Gordon called a “Bristol pedigree.” Her father, Edgar Fowler, was a doctor. Her mother, Addie Bucklin, was the daughter of Otis Bucklin, who owned the Bristol Hotel, a carriage shop and several farms in town.

The couple moved away with their infant daughter, but just months later, Edgar Fowler suffered a fatal heart attack at 24. His widow moved back to Bristol with Maude. Several years later, the widow married Dr. George Calley, a prominent Bristol citizen and state legislator who had “a huge influence” on his stepdaughter, Gordon said.

After graduating in 1900 from what was then Tilton Seminary and is now the Tilton School, Ferguson enrolled at the Greeley School of Elocution and Dramatics in Boston, which she graduated from in 1903.

Gordon said a history of Bristol published at that time identified Ferguson as “Edgar Maude Fowler.” He speculated that was in homage to her father. It was also the name Ferguson used when she successfully ran in 1926 for the first of her two terms in the New Hampshire House of Representatives.

“Clearly,” said Gordon, “the change was not a mistake, whether legally done or not.”

In 1912, she married Samuel Ferguson, who had emigrated from Northern Ireland. They settled into what Gordon called “the big house behind the church on the hill,” not far from Central Square.

Ferguson became deeply involved in the Bristol community, said Gordon, adding that he was confident “that she would have done even more had she not been precluded by the then male-dominated society.”

She was the chair of the Republican Women of Grafton County, and as a state representative, Ferguson was the first woman to serve on that body’s Judiciary Committee.

In a letter read by Keegan on Saturday, U.S. Sen. Maggie Hassan wrote that New Hampshire has “a strong tradition of inclusiveness,” of which Ferguson is a big part.

In 1930, Ferguson decided to run for the District 2 seat in the New Hampshire Senate and defeated two men to get the Republican nomination. Gordon added that in the general election, the Democrats, rather than field a challenger against her, endorsed Ferguson.

After serving one term, Ferguson was “diagnosed with a fatal disease,” said Gordon, possibly cancer. On June 23, 1932, she took her own life — a week after she was to attend the GOP national convention in Chicago. Her husband, according to Leon Anderson’s 1981 book “To This Day: The 300 years of the New Hampshire Legislature,” “found her in her Bristol garden, a pistol by her side.”