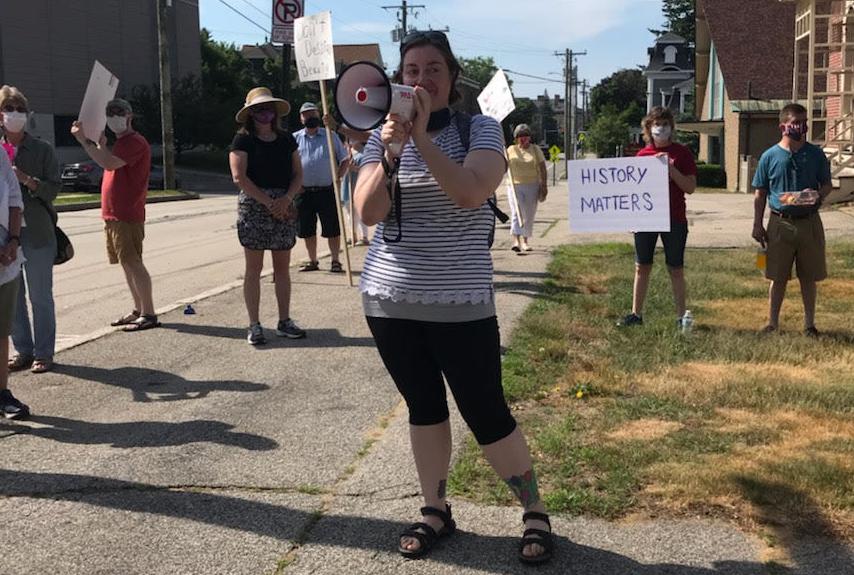 Katie Ferrara, an organizer of Sunday’s rally, talks to the crowd that showed up in support of saving Manchester’s Chandler House. 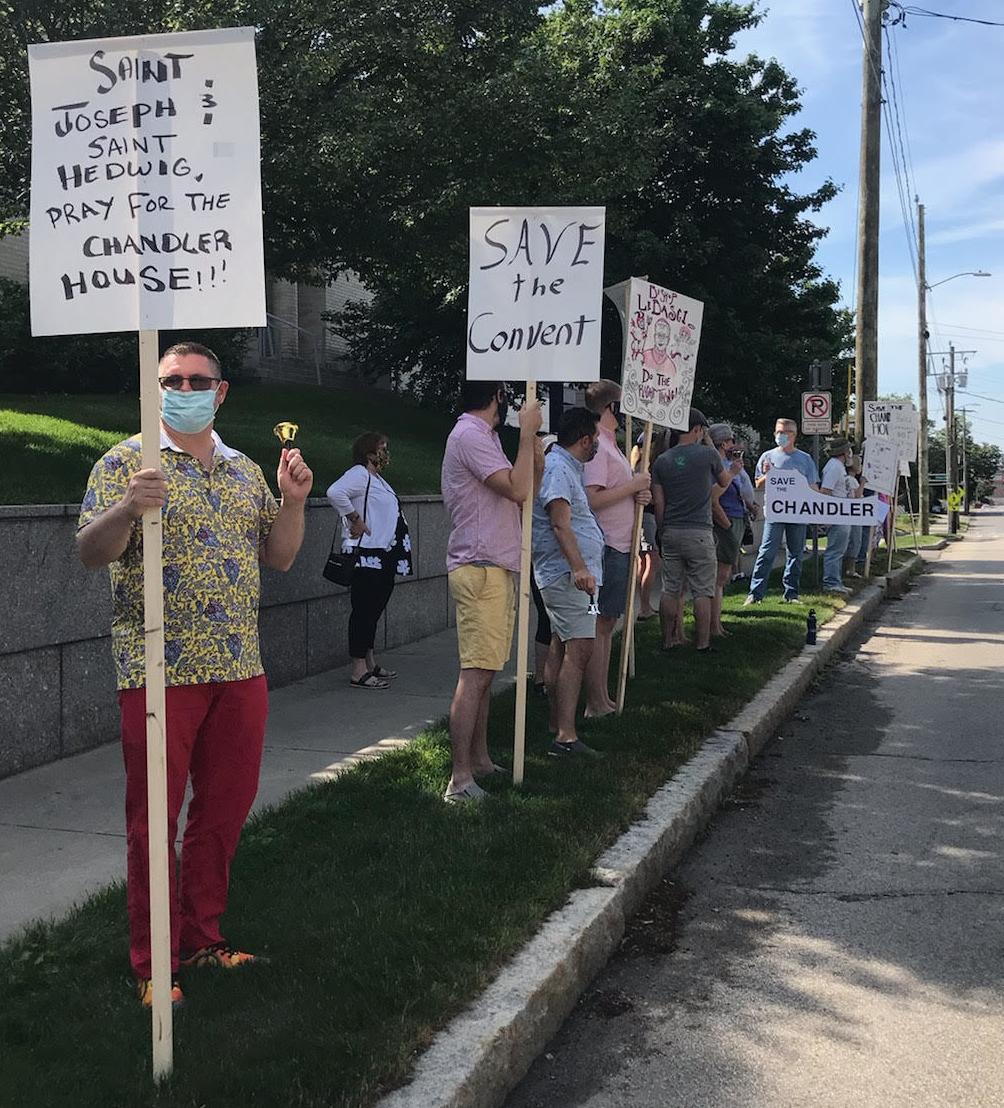 About 100 people lined Beech Street on June 28, asking the Diocese of Manchester not to tear down the Chandler House.

The Chandler House on Walnut Street in Manchester is scheduled to be demolished.

MANCHESTER — Demonstrators lined Beech Street on Sunday morning during a rally to save Chandler House, a 19th-century mansion scheduled for demolition by the Diocese of Manchester.

The Diocese, which has said the building is unsafe, plans to proceed with demolition despite last-minute pleas to preserve it.

“It’s really important to preserve these pieces of beautiful history that we’re never going to be able to get back again,” said Katie Ferrara, an organizer of the rally.

Ferrara said an online petition she started has more than 3,000 signatures from people who want the building to be spared. Ferrara said about 100 people held signs and rang small bells along both sides of Beech Street.

“Hopefully we send the message to the Diocese of Manchester that the community wants this house,” Chandler said.

“I’m doing my part for this place to be saved,” said Keith Thomas, a West Side resident who held a sign across the street from the mansion, which has been uninhabited the last five years. “It’s so beautiful. Why tear it down?”

The Diocese filed a permit application for the demolition with the city earlier this month. Mayor Joyce Craig joined the effort to save the Chandler House with a letter last week sent to Bishop Peter Libasci, asking him to grant a last-minute reprieve for the home that has towered over the northwest corner of Beech and Walnut streets since it was built in 1878.

“It would be a tragedy to tear down this vital piece of Manchester’s history and replace it with a parking lot,” Craig wrote.

Although the Diocese has said there are no definitive plans for future use of the land, it was once earmarked for a parking lot to be used by parishioners at St. Hedwig Church, just south of the Chandler House.

Libasci declined comment Sunday through a spokesman, who provided an updated statement from Libasci saying nothing had changed in the plans for the building since it was featured in the Union Leader’s City Matters column last Monday.

The Diocese had been in talks with the Currier Museum of Art, just across Beech Street from the Chandler House. The arrangement would have allowed the museum to undertake the repair and renovations of the building — estimated at $2 million — in exchange for a long-term, low-cost lease, according to the statement.

“Unfortunately, despite good faith efforts on both sides, we were unable to come to a mutually acceptable agreement,” Libasci wrote.

John Clayton, executive director of the Manchester Historic Association, disputed the “good faith” reference, saying it defied logic for the Diocese to expect the Currier to pick up the $2 million renovation tab while the Diocese would retain ownership.

“We’re hoping that the bishop will look and see this,” Clayton said at the rally. “The church has a lot of other issues to deal with. This is a simple one — allow the Currier to bring this building up to the glorious standard it met when it was first donated to the church back in 1905 and it will be a cultural gem that can be used by people here in the community.”

The mansion was originally the home of George Chandler, a businessman, banker and state senator. Since the property was acquired by the Diocese, the Chandler House has been home to several bishops and most recently served as a convent for Salesian nuns.

The New Hampshire Preservation Alliance listed Chandler House on its Seven to Save list in 2015.

Clayton said the failed negotiations reminded him of the Joni Mitchell classic “Big Yellow Taxi” and the line “They paved paradise. Put up a parking lot.”

“This building was allowed to lapse into this kind of disrepair by the Diocese and now I guess the best way to get rid of their problem is to demolish it in its entirety,” Clayton said. “You can’t tell from the outside, but the interior of this building has a grandeur that goes right back to Manchester’s Victorian heyday.”

Mayor to bishop: Save the Chandler mansion

I n March 1962, at a time when most Americans were not paying much mind to the escalating conflict in southeast Asia, 93 U.S. soldiers boarded a military-chartered transport plane in California for a top-secret mission to Vietnam.

HOOKSETT — A developer wants to demolish an architecturally prominent home of rare construction and put up a storage facility, a plan more than 4,400 signers of an online petition are against.

MANCHESTER — Officials with the Diocese of Manchester and Mayor Joyce Craig had what both sides term a “productive and enlightening” talk Tuesday regarding the future of the Chandler House, a 19th-century mansion scheduled for demolition.

MANCHESTER — Demonstrators lined Beech Street on Sunday morning during a rally to save Chandler House, a 19th-century mansion scheduled for demolition by the Diocese of Manchester.