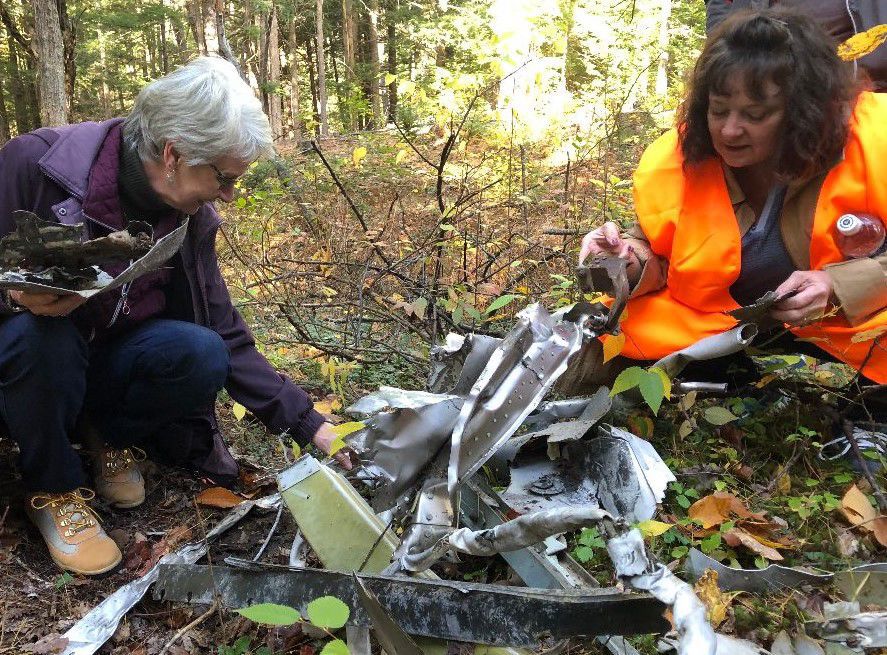 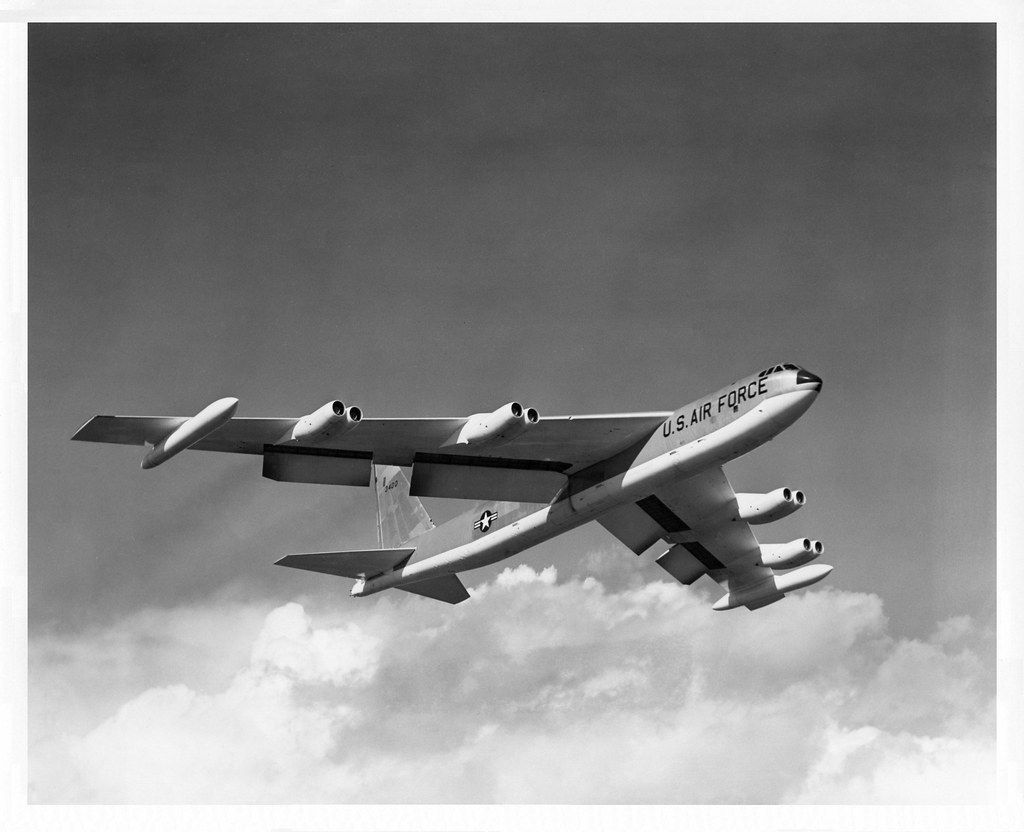 A B-52C bomber, similar to the one that crashed in Spruce Swamp in Fremont in 1959.

FREMONT — Ellen Kinser was just 6 years old when her father, U.S. Air Force Capt. George Kusch, and seven other crew members parachuted to safety moments before their B-52 bomber crashed in Spruce Swamp on Aug. 10, 1959.

Kusch was the flight commander piloting the eight-engine bomber when it began experiencing trouble.

The crew bailed out at 14,000 feet as the bomber flew over Candia, but Kusch stayed on board as long as he could and tried to direct the plane toward the ocean in an effort to prevent potential large-scale casualties on the ground.

When he realized he wouldn’t make it to the seacoast, Kusch ejected and landed safely in a yard at a home on North Road just seconds before the Cold War-era aircraft broke apart and crashed in a wooded area of Spruce Swamp, possibly at a speed as high as 300 mph.

“BOMBER CREW JUMPS SAFELY” was the banner headline across the top of the Aug. 11, 1959, edition of the Manchester Union Leader. The paper reported that the “cool-headed bravery” of Kusch had kept the crippled plane away from more populated areas.

The airmen who survived the crash have all since passed away.

Family members of the crew, who had heard stories of the harrowing ordeal over the years, visited the crash site for the first time Friday.

Kinser broke into tears as soon as she reached the site after a trek through the woods and discovered pieces of the wreckage still scattered on the ground.

After 60 years, she assumed the debris would have been buried by now.

“The first thing that comes to my mind right now is that it’s just very emotional. It’s a miracle that any of them survived. It’s overwhelming.

“I can feel him out here. It’s like he’s right here with us looking at this and saying, ‘This is where this happened,’” Kinser, of Delaware, said as she held pieces of the bomber.

The emotional visit was made possible because of the efforts of Newton resident William Kolias, a pilot who has spent the past couple of years researching the crash, seeking answers to questions that have lingered for years, and trying to find surviving family members.

The crew was on a training mission out of Westover Air Force Base in Chicopee, Mass., when the aircraft began shaking and breaking up at 34,000 feet. After notifying Westover of the problem, the crew was told to land at Goose Bay, Labrador, Canada, but never made it.

Kolias said the trouble was related to the nose-mounted radome — a structure that protects radar antenna — which began breaking into pieces.

As the bomber was losing altitude and became harder to control, Kusch ordered the rest of the crew out of the aircraft.

In addition to the site visit, Kolias discussed his research at presentations titled “It Fell From The Sky” held Thursday and Saturday at the Aviation Museum of New Hampshire in Londonderry.

Family of the crew also participated.

“It’s been satisfying to me to put together a timeline for this aircraft from the time it left Westover until it ended up here on this hill,” said Kolias, who led a moment of silence for family members at the crash site. “But by far the most fulfilling thing has been to meet these people.”

The first person with whom he connected during his extensive research was 85-year-old Shirley Hethorn, who lives in Idaho.

Hethorn’s husband, Merrel, who died in 2011, was an electronic countermeasures specialist aboard the bomber on that fateful day.

Hethorn traveled to New Hampshire and made the trip out to the crash site with her daughter, Becky Smith of Texas. Smith was born just days after the accident.

“For 60 years I’ve been imagining (the situation) he was in. This gives a final understanding,” said Hethorn, who used her cane as she made her way around a hill next to the swamp. “I never expected to see this. It was just an experience in the past. It was his experience and I could just only try to imagine it. To actually be here is just very emotional.”

Hethorn said that after her husband ejected and landed in Candia, he walked for about eight hours in the fog, trying to find other crew members. He would stop and fire his gun into the air every so often to try to get attention because the emergency radios didn’t work. At one point, Merrel Hethorn heard someone firing their own gun. Shirley Hethorn said her husband told her the shots came from co-pilot Joseph Hunt.

A 5-year-old boy eventually heard the gunshots, found the airmen and led them to a nearby farmhouse, according to Kolias. They were the last two crew members to be located.

Hethorn recalled how the military had notified her and the other wives about the crash, but it took several hours before she received word that they were found safe.

Smith said visiting the site made the stories she heard from her dad more real.

“I’m thankful for Kusch, that he cared about (the) crew and everything else, and that we had our dad for that many years,” Smith said. “When you look at the debris, it could have happened so different.”

Kolias, 65, plans to publish his findings on the crash, while Matthew Thomas, Fremont’s town historian, said he hopes to get approval for a state historic marker to be placed on Route 107 to raise awareness about the incident. Thomas said that at the time it was the only B-52 bomber crash in which the entire crew had survived.

“It happened out in the swamp and the military kind of kept it under wraps. It was the height of the Cold War,” he said.

Thomas said he was grateful for the work Kolias has put into his research. He’s studied the town’s history for decades and found it difficult to find anyone who had kept newspaper clippings about the accident. Thomas eventually tracked down a couple of original stories.

“With all the scrapbooks and pictures, nobody kept an article about that crash,” he said.

What caused a huge B-52 Stratofortress to crash and explode in a swamp in Fremont sixty years ago?

Looking Back with Aurore Eaton: Zadock Wright connects the Canterbury and Enfield Shakers

A distinctive religious community began in Canterbury, N.H., in 1782 as an informal assembly of new converts to the United Society of Believers in Christ’s Second Appearing, known as the Shakers.