A rendering of the condos a developer proposed to build on South Mammoth Road. The project called for four, five-story buildings for a total of 128 condos. 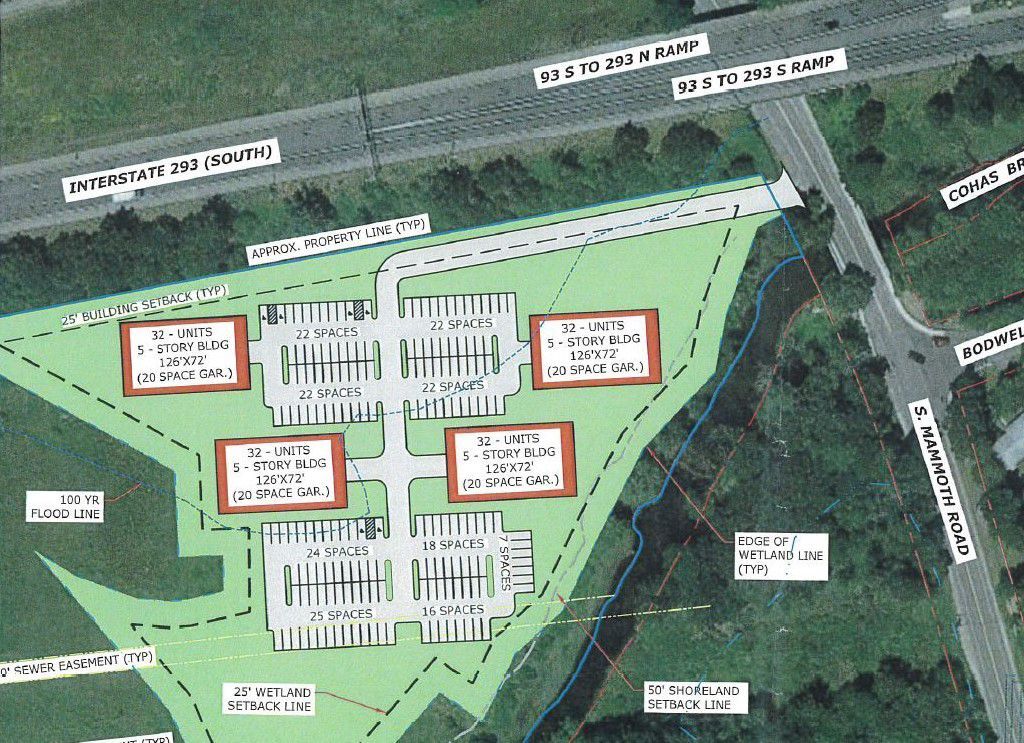 A rendering of the condos a developer proposed to build on South Mammoth Road. The project called for four, five-story buildings for a total of 128 condos.

The project at 415 S. Mammoth Road calls for four 32-unit buildings. The property is located in a “residential-single family” zoning district and will require a variance from the Zoning Board of Adjustment. The plans will be presented Thursday night.

Each building would have five stories, with a parking garage on the first floor and the residential units above, according to the application. The property is about 51 acres, but only about six acres can be developed because of wetlands and other site restrictions.

“Residential housing, particularly affordable housing, continues to be in high demand within the city of Manchester,” the application reads.

“This development, containing 128 units, is being constructed in part to help meet that demand with the projected selling price of the units falling within the range to qualify as workforce housing and address a vital need,” the application reads.

Variances are needed for the multi-family complex to be built and for the proposed height of 56 feet. The zoning district only allows structures to be 35 feet tall.

Previous attempts have been made to rezone land in the area to allow multi-family homes.

The land is owned by 415 Farm LLC, with David Giovagnoli listed as manager.

An access road is being proposed near Bodwell Road. The project will be constructed near Interstate 293 south.

The development would not be contrary to the public interest, according to the applications.

“The development is isolated from surrounding residential neighborhoods because of the highway and the natural areas of the property that push the developable area away from existing developments,” the application reads. “Those same conditions of the property mitigate both multi-family use and the height of the building such that they are not located in, or visible from, anyone’s ‘backyard.’”

The buildings will include the latest in fire suppression and monitoring systems.

The developers suggest the project “presents no significant burden” on enrollment in the city’s schools.

“The project would help to alleviate the need for housing within the city of Manchester by expanding safe and inviting areas for residents to live,” the application reads. “It would allow the subject parcel to be utilized for its highest and best use.”