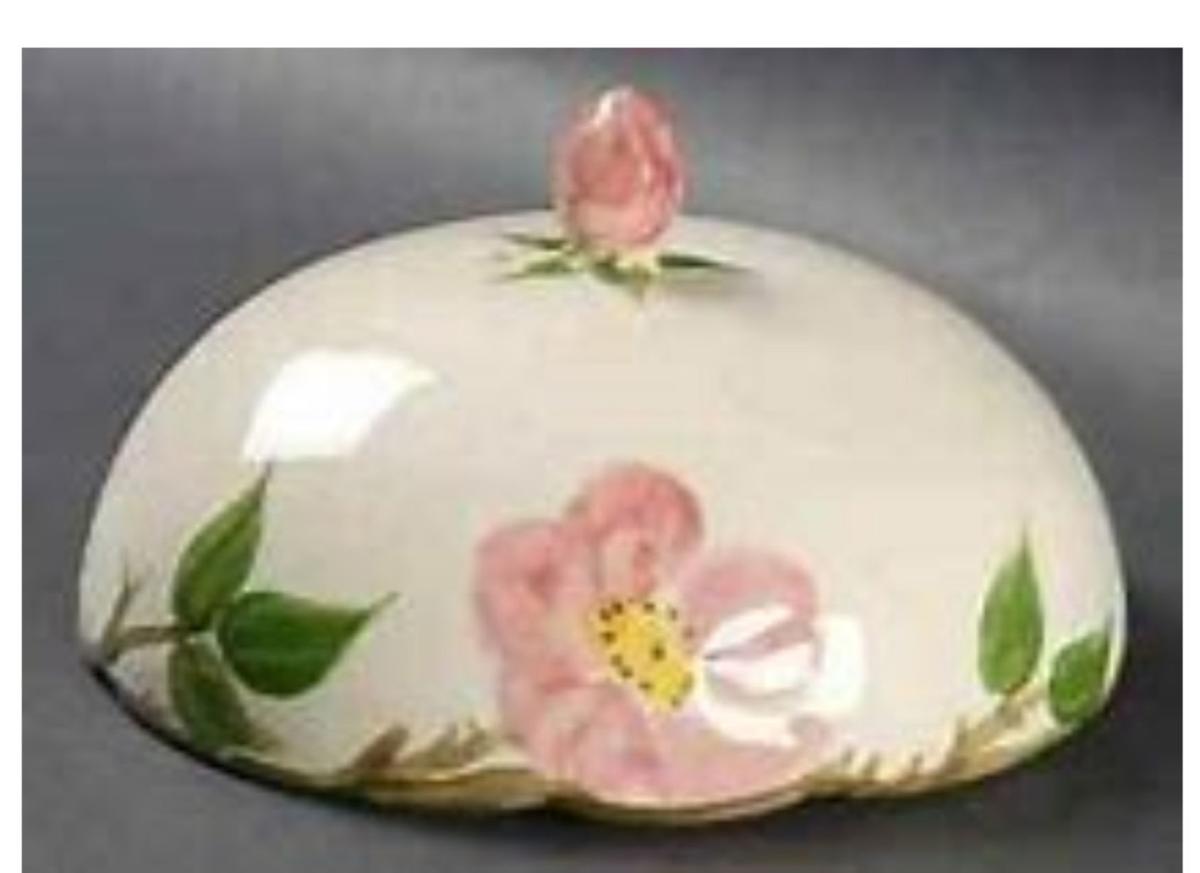 Gladden, McBean introduced a Desert Rose breakfast set in 1941 that included a toast cover with a small vent hole near the finial.

DEAR HELAINE AND JOE: I found this piece of Desert Rose china in an antiques booth at the gift shop of a local tourist attraction. It is about 5 inches wide and looks like a cover of some kind, but has a small vent hole on top. What is it?

I gave it to my sister-in-law, who collects Desert Rose, and she has never seen it before nor is it in her books on the subject. Can you help? Thank you.

DEAR L. F.: When we first saw the piece, with its domed shape and small vent hole near the three- dimensional rose finial, we guessed it might be a pancake or toast cover. Breakfast services from the first and second quarter of the 20th century sometimes had them. But this raises the question as to whether or not covers of this sort were made in the Desert Rose pattern.

Desert Rose is associated with the trade name Franciscan Ware or Franciscan Pottery, but the actual corporation responsible for making the products was Gladding, McBean, originally of Lincoln, Calif. Lincoln is in the Sacramento metropolitan area and was essentially settled in the 1860s (the population in 1880 was 275).

Early in the 1870s, high-quality deposits of kaolin — one of the essential ingredients for making hard paste porcelain — along with coal and sand were discovered. Gladding, McBean was founded there in 1875 to turn the raw ingredients into building materials such as terracotta and vitrified sewer pipe.

Over the years, Gladding, McBean acquired several other companies, including the Los Angeles Pressed Brick Company and the Tropico Pottery, also located in Los Angeles. In 1929, the stock market crash and the advent of the Great Depression curtailed Gladding, McBean’s building trades business significantly and they decided to go into the manufacture of earthenware dinnerware, which they made at the old Tropico Pottery facility in L.A. near Glendale.

The still very popular Desert Rose pattern was designed by Mary Jane Winans and is still being made by an English successor to Gladden, McBean. In 1942, a Desert Rose breakfast set was introduced, and the company’s catalog indicates the set contained the #869 toast cover, which is what L. F. appears to have.

This toast cover should have a diameter of approximately 5½ inches. (We suppose it could also be used to keep pancakes warm.) It is a fairly uncommon piece in the Desert Rose pattern, and although we have seen it offered for sale for much less, it should retail around $150-$175.

MANCHESTER — The developer of a new hotel being built in the Millyard hopes to now focus on building housing that is needed to help sustain New Hampshire’s workforce.

Treasures in Your Attic: Fig painting lovely, but likely has limited monetary value

Dear Helaine and Joe: I have what I hope is an interesting mystery to solve. About a year ago, I acquired this painting from a local consignment shop. It was painted by Fritz Fig, an English artist known for his paintings of Dutch children with wooden shoes, mainly depicted in idyllic genre …

Millennials willing to compromise more to buy a home

Young buyers are willing to make more sacrifices to buy a home — like drawing from retirement savings, delaying starting a family and living in lower-cost or faraway neighborhoods for the chance to build equity, according to a new study.

The housing crisis is making its way to the heartland

Earning $40,000 a year in Omaha used to be enough to make rent comfortably. Not anymore.