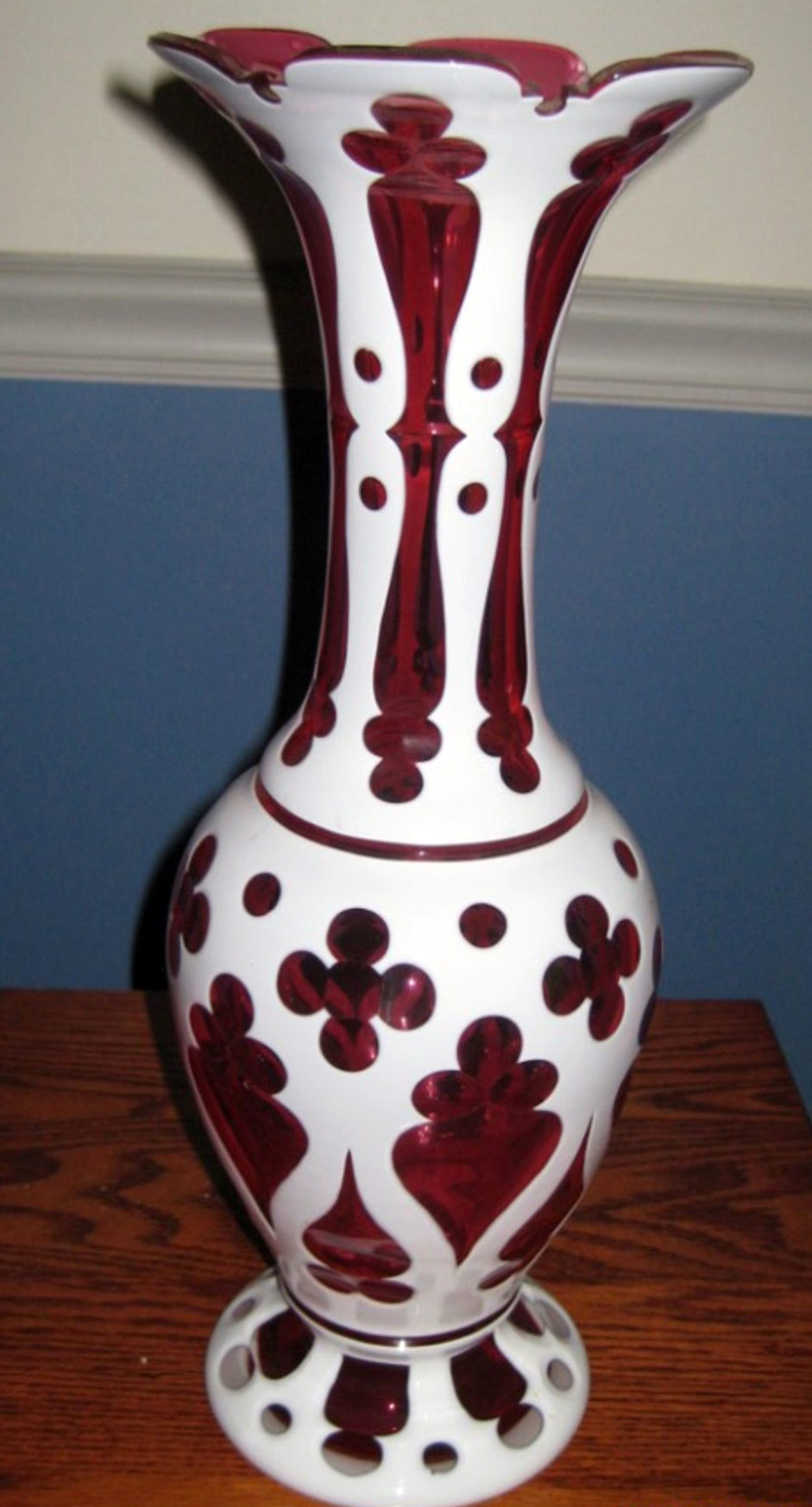 This tall vase was probably once part of a pair.

DEAR HELAINE AND JOE: What can you tell me about this vase? It is 15¾ inches tall and 5 inches across the base. It appears to be made from several layers of glass: clear, ruby then white. The design seems to be perfectly symmetrical and appears to have been made by cutting or grinding through the outer layer of white glass, but there are no grinding marks visible. There are no chips and all the edges are sharp and crisp.

DEAR J. F.: Once upon a time, this was probably one of a pair of vases that comprised a garniture set used to decorate a Victorian mantel. Its mate has vanished into the lost and found of history, but this one with its superb craftsmanship remains a thing of beauty.

This vase began its life in central Europe in a place that is now part of the modern Czech Republic. Then, the region was called Bohemia, and it was part of the Austro-Hungarian Empire. It is now the far western part of the Czech Republic and on the map appears to be approximately half the land mass.

Archeologists have found Bohemian glass works dating to approximately 1250 AD. But this glass vase, which was probably made around the Karlovy Vary area (Karlsbad), is much later and might date to the last quarter of the 19th century. It’s hard to tell exactly how old the piece is without a little family history because this sort of piece is currently made in Bohemia.

J. F.’s piece started out as a “gather” (or “blob,” if you prefer) of clear glass on the end of a glassblower’s blow pipe. The gather was then coated with red (cranberry) glass and then with white glass. The blob was then inflated and laboriously shaped until it was the vase seen today.

It was then sent to the decorating department, where skilled workers created the notching around the top and cut through the layers of white and cranberry to create the graceful and symmetrical “windows” seen on the finished piece. The surface was then polished to remove any telltale signs of the cutting process.

Tons of this glassware type is being made for tourists visiting Bohemia and other parts of Europe today. But the pieces tend to be smaller and rather less well-done. At 15¾-inches tall, J. F.’s example is a far larger than average specimen that would have been improved only by gilding and a more imaginative pattern to the cutting. Still, for retail purposes, the vase should be valued in the $500 to $650 range.

Helaine Fendelman and Joe Rosson have written a number of books on antiques. If you have an item you’d like to know more about, contact them at Joe Rosson, 2504 Seymour Ave., Knoxville, TN 37917 or treasures@knology.net. If you’d like your question to be considered for the column, please include a high-resolution, in-focus photo of the subject.