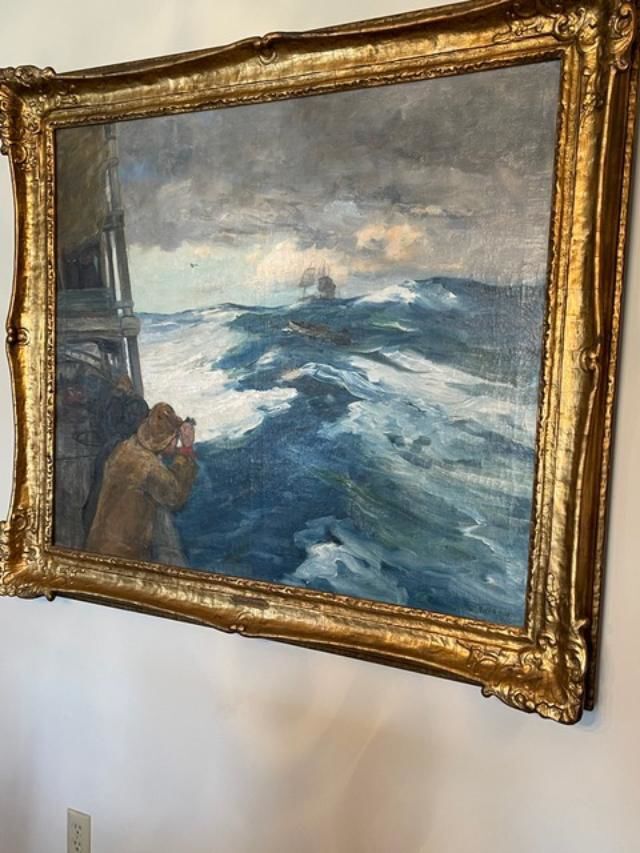 A dramatic painting by a well-known American artist.

Treasures: Gruppe painting is a gem

I live in the middle of Iowa where there is no appraiser anywhere near my vicinity, so I hope you will be able to assist me. I am looking for some information about a marine oil painting signed in the lower right “Chas. P. Gruppe.” It is in the original gold frame and the size of the painting is 35 1/2-by-41 1/2 inches. We think this painting was probably purchased by my husband’s grandparents in the 1920s or '30s. Hope you are able to help.

This is certainly a dramatic painting! Some may even find the heaving ocean a bit stomach-churning.

Today, the internet can tell collectors a lot about what they own, but it can also lead them down a rabbit hole into a maelstrom of misinformation. It really helps to have a little experience interpreting information gathered online, and always remember to look for a second source to act as confirmation.

Charles Paul Gruppe was born on Sept. 3, 1860, in Picton, Ontario, Canada. His father, Henry W. Gruppe, died when Charles was 3 years old and his mother, Albertina, moved Charles and his brother and sister to Rochester, New York. Gruppe was a self-taught artist and somewhat of a prodigy when at age 12 he became one of the founders of the Rochester Art Club.

In 1897, Gruppe moved his wife and family to the Netherlands, where he worked with the Hague School and also worked as a dealer, selling paintings by Dutch artists in the United States. The Gruppe family returned to New York City in 1913 just before the outbreak of World War I.

Other than Gruppe, the Salmagundi Club included such members as N. C. Wyeth, Norman Rockwell and Louis Comfort Tiffany. It was founded in 1871, and many say its name was taken from a kind of hodgepodge stew that was often served to the members in the club’s early days. But it is really from a French word for “a desperate assembly of ideas, things or people.”

Gruppe had four children, all of whom were in the arts – one a cellist, another a sculptor, another a watercolorist. His son Emile Albert Gruppe (1896-1978) was also an artist who specialized in coastal and marine paintings like his father. Emile Gruppe was a member of the Cape Ann (Massachusetts) school of artists, and his work can bring strong prices.

A.N. might be interested in knowing she owns a piece by an artist whose work can be found in the collections of the Smithsonian Institution and the Detroit Institute of Art, among others. Charles Gruppe’s paintings usually sell for between $5,000 and $15,000, and his most desired works feature boats, boatyards, wharves and people.

In our opinion, the painting in today’s question should be insured for $7,500.

(Helaine Fendelman and Joe Rosson have written a number of books on antiques. Do you have an item you’d like to know more about? Contact them at Joe Rosson, 2504 Seymour Ave., Knoxville, TN 37917, or email them at treasures@knology.net. If you’d like your question to be considered for their column, please include a high-resolution photo of the subject, which must be in focus, with your inquiry.)

OTTAWA, April 19 (Reuters) - Canadian housing starts rose 21.6% in March compared with the previous month on a surge in multiple urban starts, data from the Canadian Mortgage and Housing Corporation showed on Monday.

The warmth of natural wood trim is the finishing detail that outlines windows and doors and adds distinction to a room. Whether furnishings are stark contemporary or tried-and-true traditional, any furniture style is complemented by wood trim, and white oak is one of the most popular choices…

How to start a backyard garden

While spring is the ideal time to begin digging and growing a traditional vegetable or flower garden, plenty of planning and other tasks can be done at any time of the year. Gardeners spend most of the summer watering, weeding and watching young plants grow. Fall is a good time to plant tree…