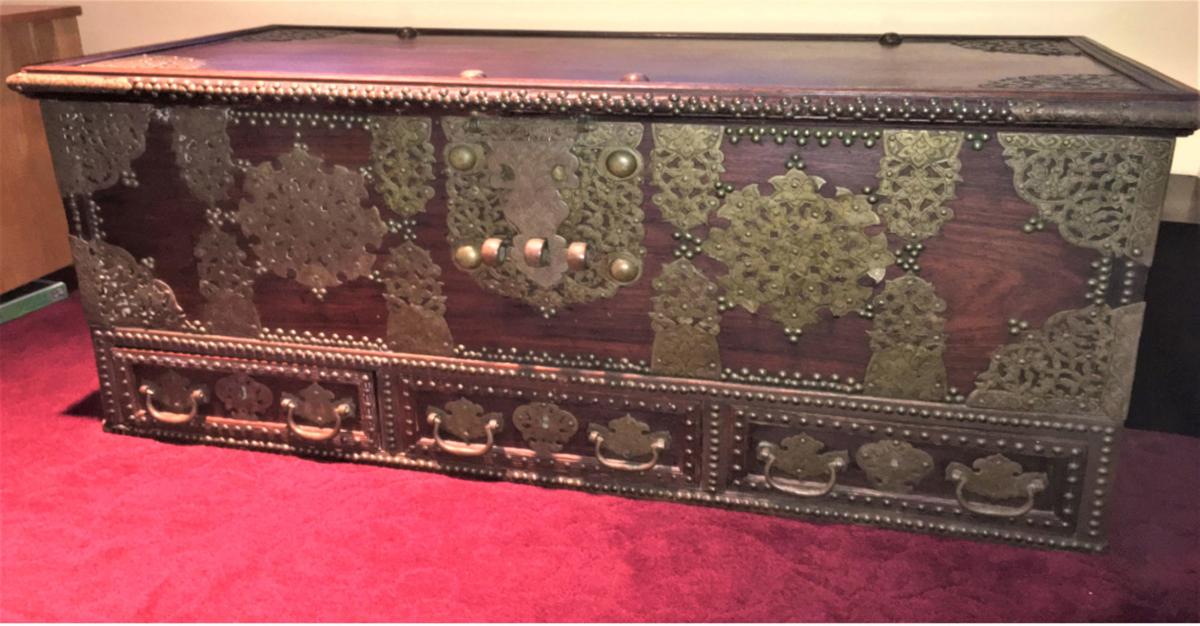 DEAR HELAINE AND JOE: I inherited this chest from my parents. It was shipped to them from Saudi Arabia in 1968, and they referred to it as the “Kuwaiti chest.” My father said it was dug up in the desert somewhere. It measures 52 inches wide by 22 inches tall. Any information would be appreciated, and should I be concerned about sun damage since I have it in a room under a window?

DEAR L.: This and similar chests are called by a variety of names. “Kuwaiti chest” is one of them. They are also referred to as Shirazi chests (if they show any kind of Persian influence in the design), Zanzibar chests, Omani chests and more generically “Arab chests.”

A Kuwaiti chest is sometimes associated with storage in the captain’s quarters of a seagoing dhow, which is a lateen-rigged (slanted triangular sail) ship that is thought to have originated in India. At least some of the chests might have been decorated by seamen on dhows during long voyages.

Dhows are often associated with Middle Eastern and Indian vessels sailing in the Red Sea and Indian Ocean but can also be found on the Nile River. Depending on the size, a dhow can have a crew of between 12 and 30. But we think this particular chest was far too large to have been housed in the captain’s cabin of a dhow and was probably not decorated by a ship’s crew.

Instead, we think it is a dower chest — the chest a young woman brought to her new home containing both her material wealth and items she would need to set up housekeeping. We do not have a photograph to substantiate this, but we suspect the top on the piece raises up to reveal an interior that probably has a lidded till along the side at the top of the interior that was designed to hold valuable such as jewelry and/or money.

As for the piece having been dug up in the desert, we doubt if this is literally true. Such a circumstance would have damaged the piece terribly, but it might have some figurative or metaphoric meaning. We believe the piece was actually made in India (some sources suggest near the Pakistan border or even in Pakistan itself), and the wood is probably either teak or shisham (aka Dalbergia sissoo), also called Bombay blackwood or North Indian rosewood.

The beautifully decorated dower chest is probably late 19th or early 20th century and shows English influence in the batwing pulls on the bottom drawer fronts. We suggest keeping the beautiful piece out of direct sunlight because it will eventually fade the wood on the top. This would diminish aesthetic and monetary value.

We have seen similar Kuwaiti dower chests sell for very little at auction (less than $500), but at retail we have found them priced at more than $3,000. This leaves us in a bit of a quandary, but we believe the chest should be insured in the $2,500-$3,000 range.

If you have an item you’d like to know more about, contact Helaine Fendelman and Joe Rosson at Joe Rosson, 2504 Seymour Ave., Knoxville, TN 37917 or at treasures@knology.net. If you’d like your question to be considered for the column, please include a high-resolution, in-focus photograph of the subject.

New-home sales in the U.S. unexpectedly increased in April after swooning a month earlier, suggesting the housing market is starting to stabilize.

Don’t wait too long to fix your gutters

Gutters serve the important function of diverting water away from your home, preventing costly damage and keeping your siding and foundation in good working order. With regular maintenance, gutters can last for many years. But if they’re beginning to show signs of wear, it may be time to rep…

Gardening boosts your mood as much as some types of exercise, study finds

In recent weeks, public health experts have warned that the coronavirus pandemic could have a devastating effect on mental health. In the United States, rates of anxiety and depression are rising. Dread and confusion pervade everyday life.

Apparatus is a tilt-cradle water