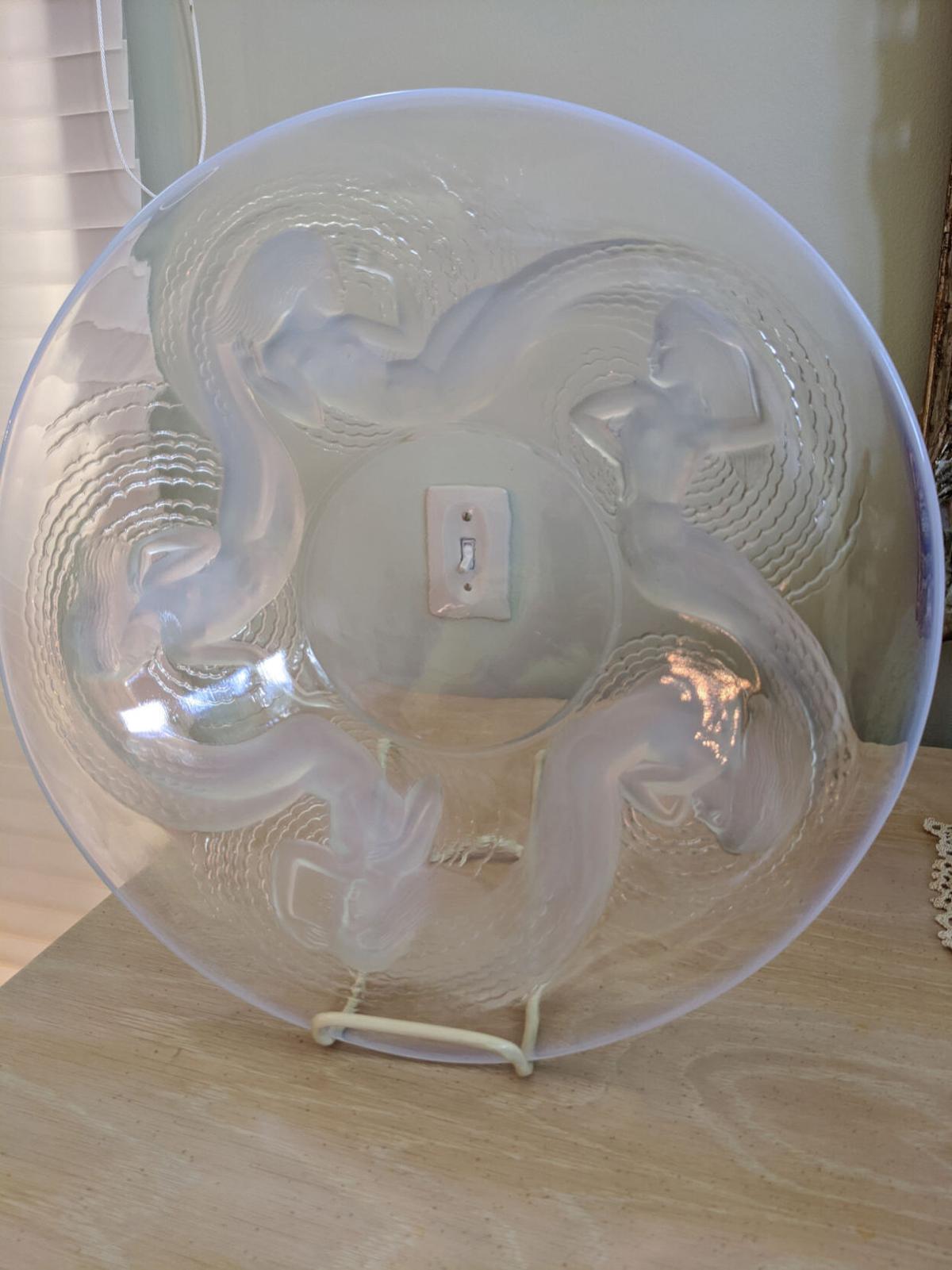 Are these mermaids, or something else?

I am sending photos of a glass, 14-inch diameter, mermaid plate or bowl that has a signature on it. I think it reads “Lalique France” — but I am not sure. Any thoughts or estimate of value would be appreciated.

The pattern name of this lovely piece is “Calypso,” and it was indeed made by Lalique at their Verrerie d’Alsace (Glassworks of Alsace). It is located in Wingen-sur-Moder, Alsace, France, and was founded by Rene Lalique in 1922. Alsace is a region in far eastern France with Strasbourg as its capital.

Lalique was born in Ay in 1860, but his family moved to Paris when he was a child. After his father died, Rene became apprenticed to jeweler Louis Aucoc, but he also attended classes at the Ecole des Arts Decoratifs ( School of Decorative Arts) in Paris. In 1885, after doing design work for important jewelers such as Cartier and Boucheron, he took over the workshop of jeweler Jules Destape in the Place Gaillon, Paris.

By the turn of the 20th century, some called him “the inventor of modern jewelry.” Along with gold, precious and semiprecious stones, Lalique also used nonprecious materials such as horn, mother-of-pearl, enamel, and after about 1890, glass.

In 1905, Lalique opened a shop at 24 Place Vendome and showcased both his jewelry and glass objects, which were made at his workshop in Clairefontaine near Rambouillet. In 1907, perfumer Francois Coty saw Lalique’s work and persuaded him to start making stylish perfume bottles. This began the transition of Rene Lalique from art nouveau jeweler to art deco glassmaker.

The Verrerie d’Alsace met Lalique’s growing need for factory glass production. Pieces made before his death in 1945 are signed “ R. Lalique, France,” but from 1945 to 1977 they are signed “ Lalique France,” either with an acid-etched stencil or an engraved signature made by using a diamond point pencil.

There are actually two Lalique patterns, one called “Calypso,” with five water sprites, and another called “Ondine,” with six. An “Ondine” (or “Undine”) is basically an elemental spirit based on the alchemical elements: earth, air, fire and water. The spirit associated with earth is the gnome; with air, the sylph; with fire, the salamander; and with water, the undine.

Undines are usually female and lived near waterfalls, pools of water and the sea. They have morphed into the mermaid, but that is not exactly correct. C.P. reports that the large plate/coupe/bowl was purchased in 1954, which is probably when the piece was made, give or take a year or two. It is opalescent glass (clear with areas of milky opacity), and she also reports it is 14 inches in diameter, which really helps us determine value.

If the piece is in perfect condition — no cracks, chips or unsightly scratches — it should sell at auction for between $2,300 and $3,000 on the market. Retail value would be higher.

A new development that could bring nearly 50 homes to Amherst is being proposed along New Boston Road.

WASHINGTON — Contracts to buy U.S. previously owned homes fell for a second straight month in October as an acute shortage of properties pushed up prices, though the housing market remains supported by record low mortgage rates.

Housing boom in U.S. threatened by shortage of available homes

Housing boom in U.S. threatened by shortage of available homes