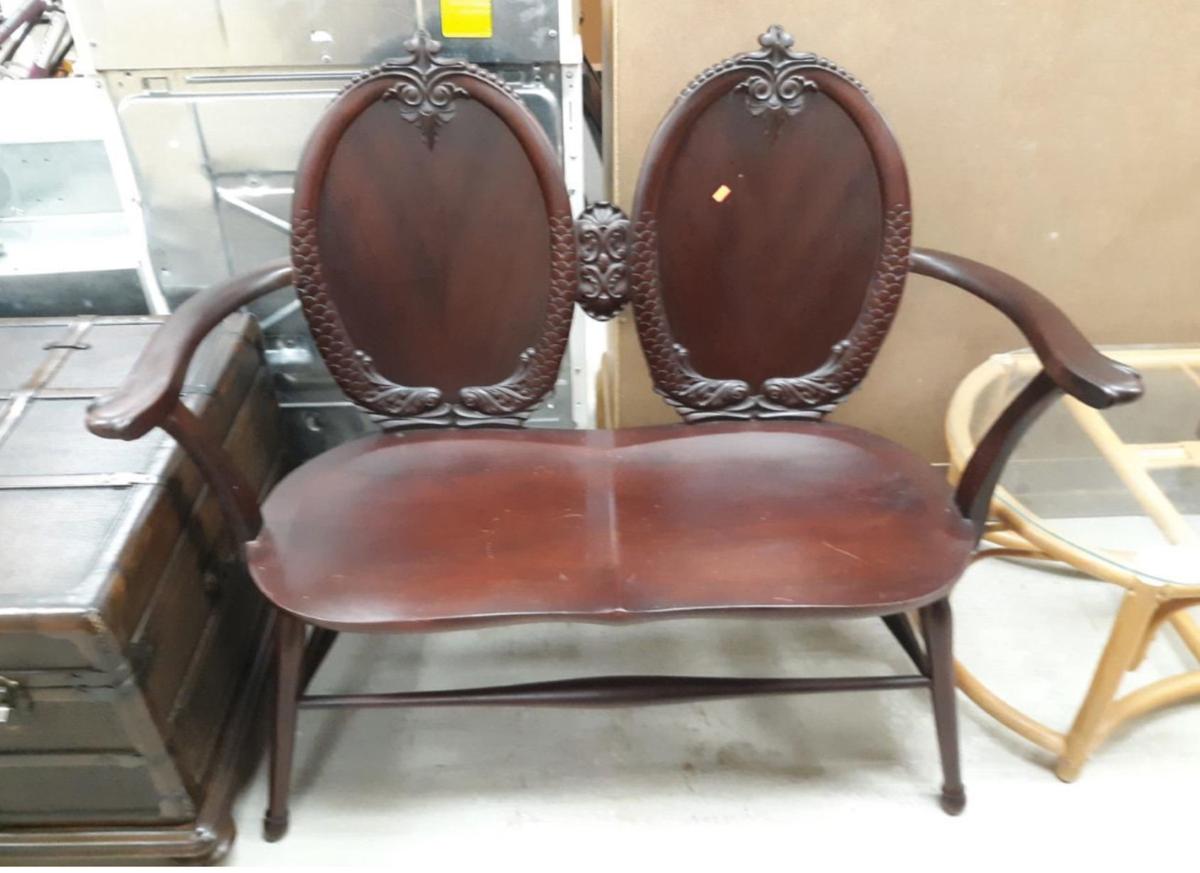 With so many “Wedgwoods” in the pottery business over the centuries, there’s plenty of room for confusion.

I found this settee in a local antiques shop and liked it so much that I purchased it for $150. Now I am concerned that I paid too much. What do you think?

Dear L. R.: First of all — and most importantly — we do not think you paid too much for this rather stylish solid wood (probably mahogany) settee that is now around 110 years old.

Second of all — and perhaps more interestingly — we had a difference of opinion as to exactly what the piece was. Helaine looked at the curvilinear lines and thought American Victorian Rococo Revival. But Joe looked at the neoclassical elements (essentially, the dolphin-enclosed oval backs) and thought Edwardian. Since Helaine does not like this term applied to anything but English furniture, Joe made it “English Edwardian.”

At something of an impasse, Helaine called up some friends in the 19antiques business but did not receive a satisfactory answer until she spoke with an auctioneer who had some definite ideas about the piece. He said it looked like the maker was either R. J. Horner or George Flint — both New York City cabinetmakers — and he thought the piece was circa 1900.

The auctioneer felt the “scaly dolphins” were a dead giveaway for the two makers. This opinion seemed to have some authority behind it, so we hit the books to do our due diligence and found it was not as clear cut as we had hoped. The George C. Flint Furniture Company was founded in New York City in 1868 and they designed, sold and manufactured furniture in a variety of styles. R. J. Horner was founded in 1886 and sold furniture it manufactured, as well as imported it from Europe.

The two companies began life on West 23rd Street, but Horner moved to West 14th Street in 1876. The firms merged in either 1906 or 1914, depending on the source, to become Horner and Flint. Flint advertised that it made “good furniture at low prices,” while Horner made furniture in a range of styles and price points.

Two-person settees were made in the rather short time period when Edward VII was on the English throne (1901-1910). Some were regurgitations of Chippendale and Hepplewhite styles, while others were strongly influenced by the Art Nouveau movement. Neoclassic themes were also in vogue. Today’s collectors tend to prefer examples with caned backs, inlay or painted decorations.

The pieces often came as parlor groupings with at least a pair of chairs included. The example in today’s question has an interesting design, but one thing that might keep the value down is the plank seat, which looks rather uncomfortable for relaxed seating. Originally it may have been intended for use in an entrance hall to deter annoying callers from lingering.

HOOKSETT — A developer wants to demolish an architecturally prominent home of rare construction and put up a storage facility, a plan more than 4,400 signers of an online petition are against.

Have holiday plans on hold? You are not alone. Instead of travel, many are choosing to take a staycation to enjoy rest and relaxation. This is where improvements and renovations to outdoor environments come into play.

Stuck inside for the past few months, we’re ready to get out, even if we can’t get all the way out to a restaurant or a park. What if, instead, we could add on a room to our homes — another place to go, at home?

Treasures in Your Attic: Plank seat may keep settee’s value down, but settee is stylish

Look into a modern bathroom mirror

Look into a modern bathroom mirror