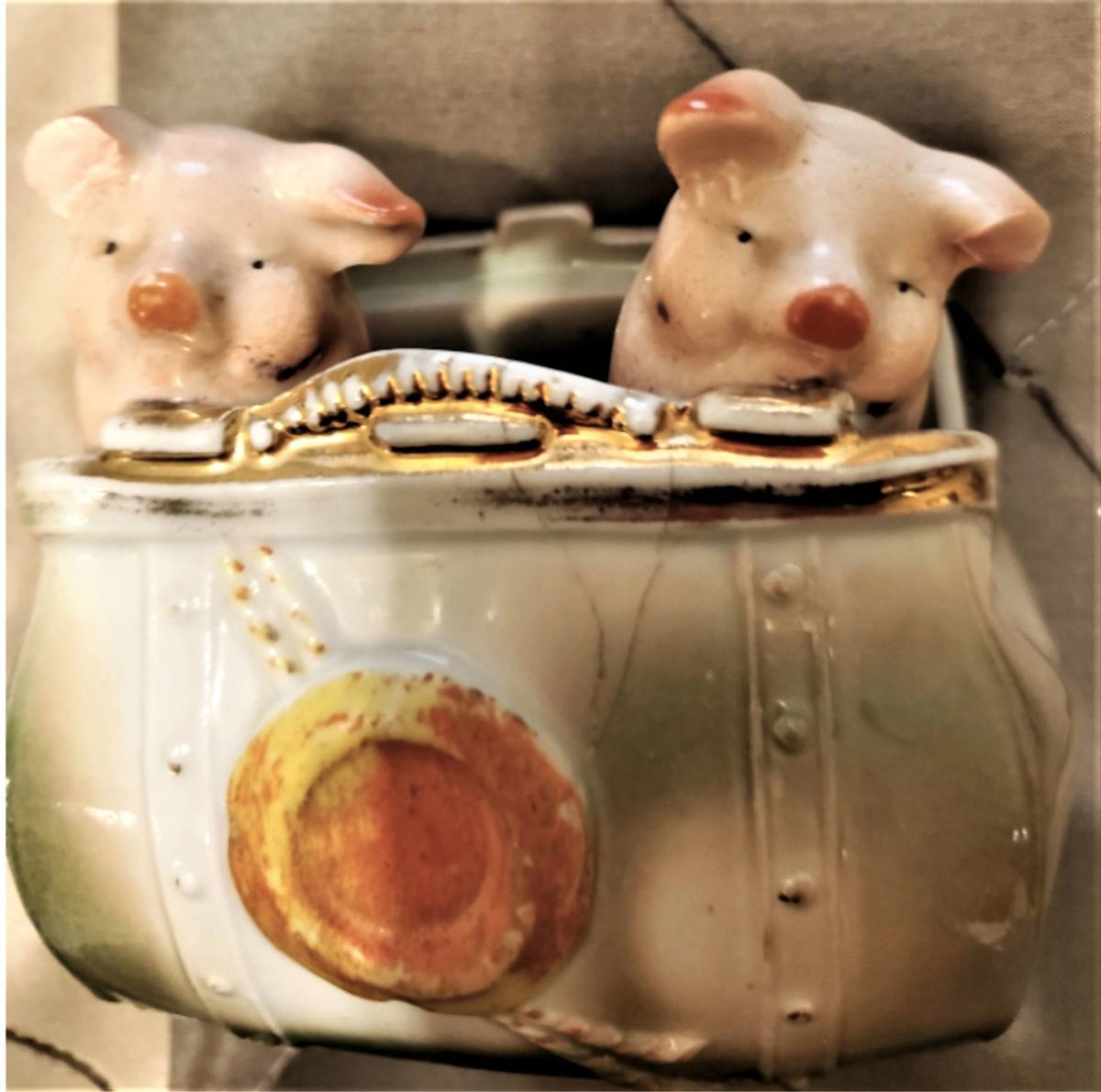 DEAR HELAINE AND JOE: I inherited these items from various family members, and I am hoping you can tell me something about their possible value. The piggies in a poke are 4 inches wide by 3 inches tall. It is just a knickknack and has no markings. This piece was given to me by a great-aunt who died in the 1980s. The other piggies are salt and pepper shakers. There are no chips or cracks.

The teapot appears to be circa 1925-1950 American and probably worth in the $35 to $50 range, while the tureen is European, possibly French, and from the first quarter of the 20th century. Value? Probably $100 to $125 because it is attractive and useful.

Now on to the main event: the pigs. The three little piggy salt and pepper shakers are beyond cute with their flirty eyes and saggy overalls, two with painted blue stripes, one with painted flowers. We took a close look, hoping they might have been made by Shawnee pottery, but the little porkers do not appear to have been made in one of the company’s molds.

The three pigs were probably made in the third quarter of the 20th century. Their country of origin might have been either Germany or Japan. But without a mark, we cannot be sure which (we favor Japan). In any event, the three should probably be valued at around $10 to $12 each at retail.

The piggies in a poke, however, are German in origin and are part of a collecting group known as “pink pigs,” which is part of a larger collecting group called “fairings.” Fairings are generally small, inexpensive pieces of porcelain that were either given away at country fairs or sold for just a few pennies each. In the case of some pink pig items, they were emblazoned with the names of cities and/or tourist locations and sold as souvenirs in gift shops.

Collectors of pink pigs can find examples riding in an early automobile, playing piano, posed beside a bean pot, sitting on a sofa or mailing a letter. The pigs in a purse C. W. owns is not uncommon and was probably made some time between the end of World War I and the beginning of World War II. The pink pig fairing has a retail value in the $50 to $65 range.

If you have an item you would like to find out more about, write to Joe Rosson, 2504 Seymour Ave., Knoxville, TN 37917 or email treasures@knology.net. If you’d like your question to be considered for the column, include a high-resolution, in-focus photo of the subject.

MANCHESTER — The developer of a new hotel being built in the Millyard hopes to now focus on building housing that is needed to help sustain New Hampshire’s workforce.

Treasures in Your Attic: Fig painting lovely, but likely has limited monetary value

Dear Helaine and Joe: I have what I hope is an interesting mystery to solve. About a year ago, I acquired this painting from a local consignment shop. It was painted by Fritz Fig, an English artist known for his paintings of Dutch children with wooden shoes, mainly depicted in idyllic genre …

Millennials willing to compromise more to buy a home

Young buyers are willing to make more sacrifices to buy a home — like drawing from retirement savings, delaying starting a family and living in lower-cost or faraway neighborhoods for the chance to build equity, according to a new study.

The housing crisis is making its way to the heartland

Earning $40,000 a year in Omaha used to be enough to make rent comfortably. Not anymore.