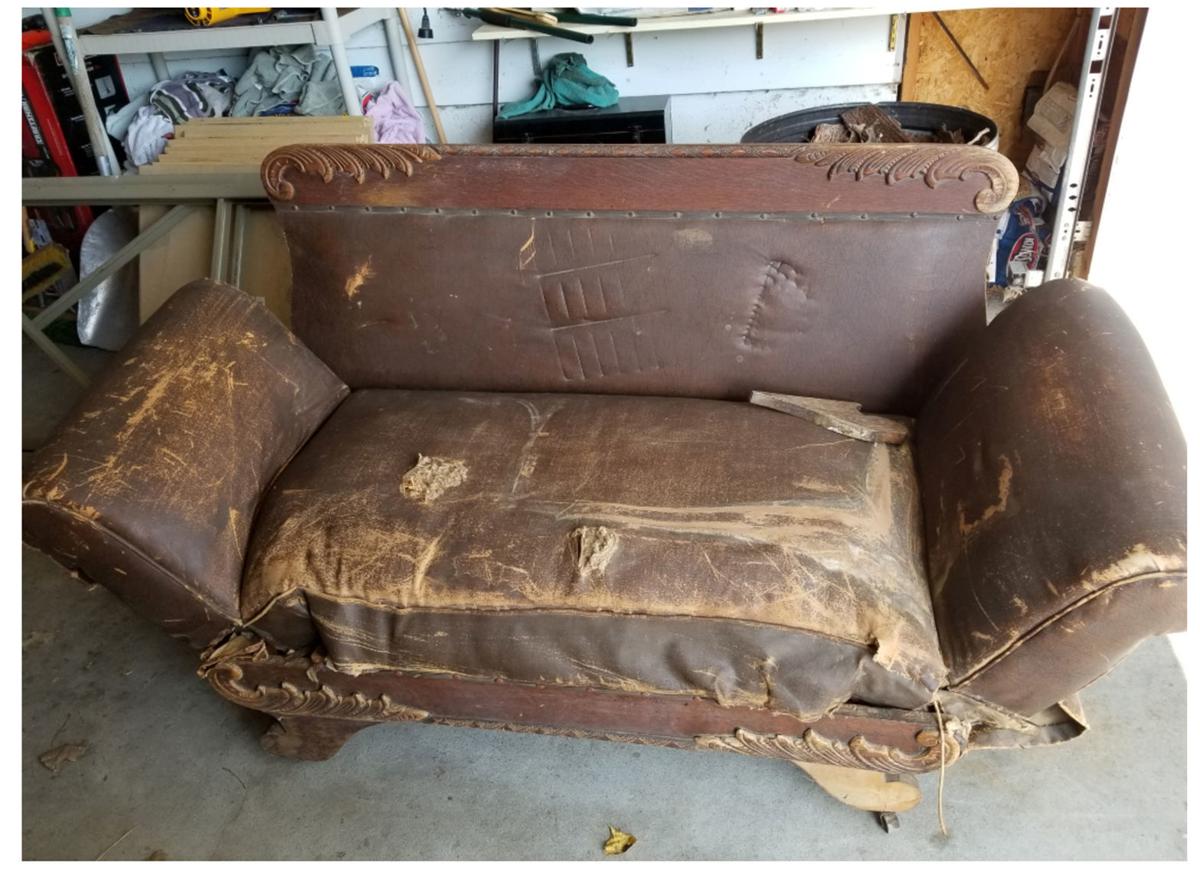 This convertible sofa will take a lot of effort to save.

DEAR HELAINE AND JOE: I recently purchased this piece with its ratcheting arms because I thought it was unique. I have never seen anything like it before. I asked around at my local antiques shops, but no one seemed to know much about it. I have three questions. What is it called? How old is it? Is it worth reupholstering? Any information would be appreciated.

DEAR B.: The word “unique” means one of a kind. This interesting convertible sofa is far from being that. Many people would call the piece a train wreck because of its current condition. But it is really a potentially charming convertible sofa — we believe it is more of a love seat size — with ratcheting arms that adjust down to form a bed.

We have seen pieces a tad older described as being convertible fainting couches, but we think that is a touch too precious. The so-called Victorian “fainting couch” was nothing more than a daybed, and that is exactly what this was intended to be — sofa by day, bed for night — and in the afternoon perhaps a comfy place to take a nap. But to receive a person in a “faint” was an unlikely occurrence.

These convertible pieces of furniture can be found as early as the American classic/Victorian transition period of the 1840s and ’50s. Except at that time, the sofa tended to be full-sized, and the back released to come down and form a flat surface so the piece could be used as a bed for sleep.

We suppose they were nice to have around in the mid- to late 19th century and into the early 20th century when guests visited and required an extra bed. The rather smallish piece in today’s question might have been most useful in a small apartment when having a sofa that became a bed could be practical, if not terribly comfortable.

The convertible sofa belonging to L. B. appears to be from the early years of the 20th century. We believe a circa 1905 date would probably be about right. Looking at the construction in the many pictures we were sent (thank you!) we wonder if the back was not designed to be removed as well.

The arms that ratchet down are an interesting modern innovation on the convertible sofa, but they do not greatly enhance the monetary value. Now let’s get to the point and examine the actual monetary value. Earlier we called this a train wreck, and it is. The overall condition is unsightly with a leather covering (which looks like the original) being scuffed and scored, tattered and torn beyond redemption. Currently, the value is close to zero.

In addition, we see what might be either a replaced leg or missing veneer on a leg and believe restoring the piece will be a lot of work. But if L. B, loves it, she should give it a try with the understanding that when she is finished — and if she does an outstanding job — the convertible sofa will only be worth in the $175-$250 range at most.

Treasures in Your Attic: Lamp might have originally been part of stand-alone sculpture

DEAR HELAINE AND JOE: My wife’s grandmother gave us this lamp, which has “Humplik” on the bottom. Do you have any information on this piece? Thank you.

Millennials' share of the U.S. housing market: small and shrinking

Today's young adults are starting their lives on drastically different financial footing than their parents did decades ago. Necessities cost far more and wages have flattened; as a result, many young families have to dig through mountains of debt before they can even think about growing the…

Real estate Q&A: You signed agent's agreement, so grit your teeth and pay

Q: My tenant wants to purchase the home he recently rented with the help of my real estate agent. I checked the listing agreement I signed with the agent and noticed that it states that if I sell the property to the tenant, I need to pay the agent an additional sales commission. I already pa…