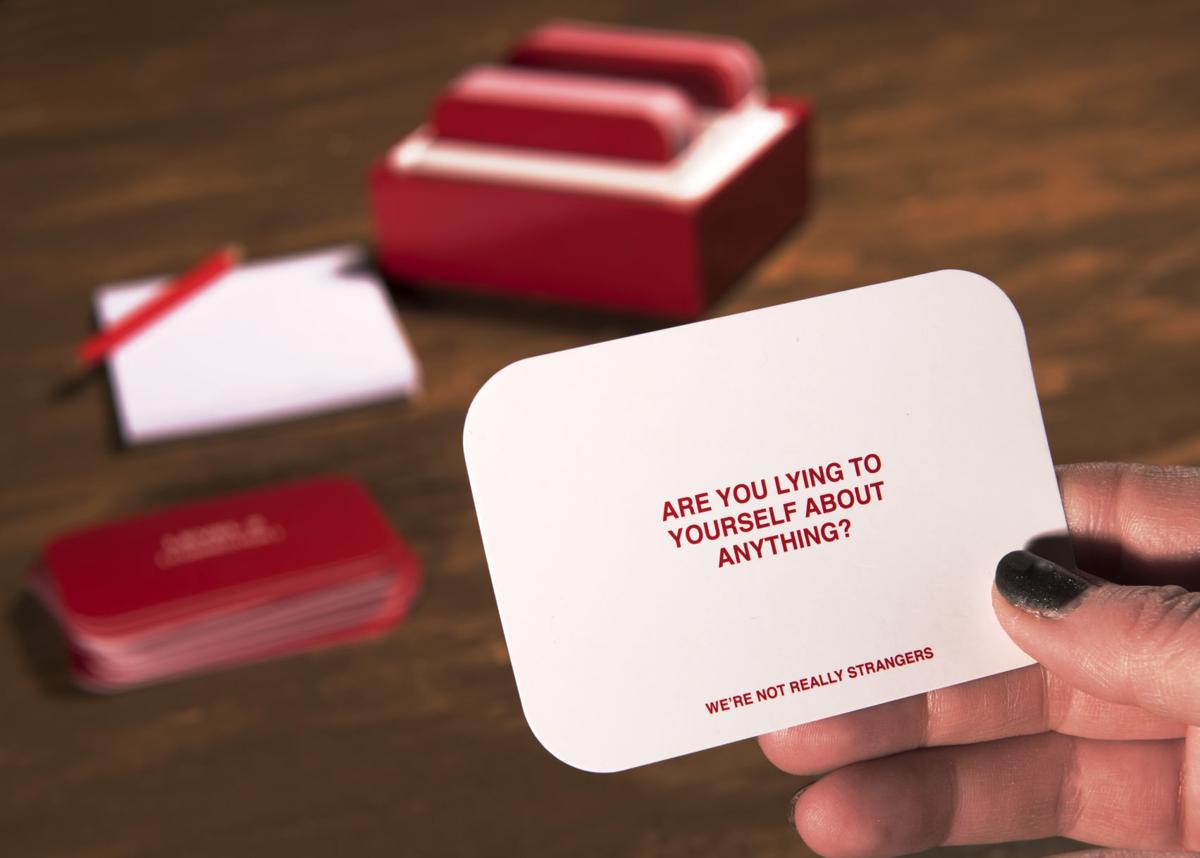 We’re Not Really Strangers is one of several card games that urges players to get personal with one another — and themselves. 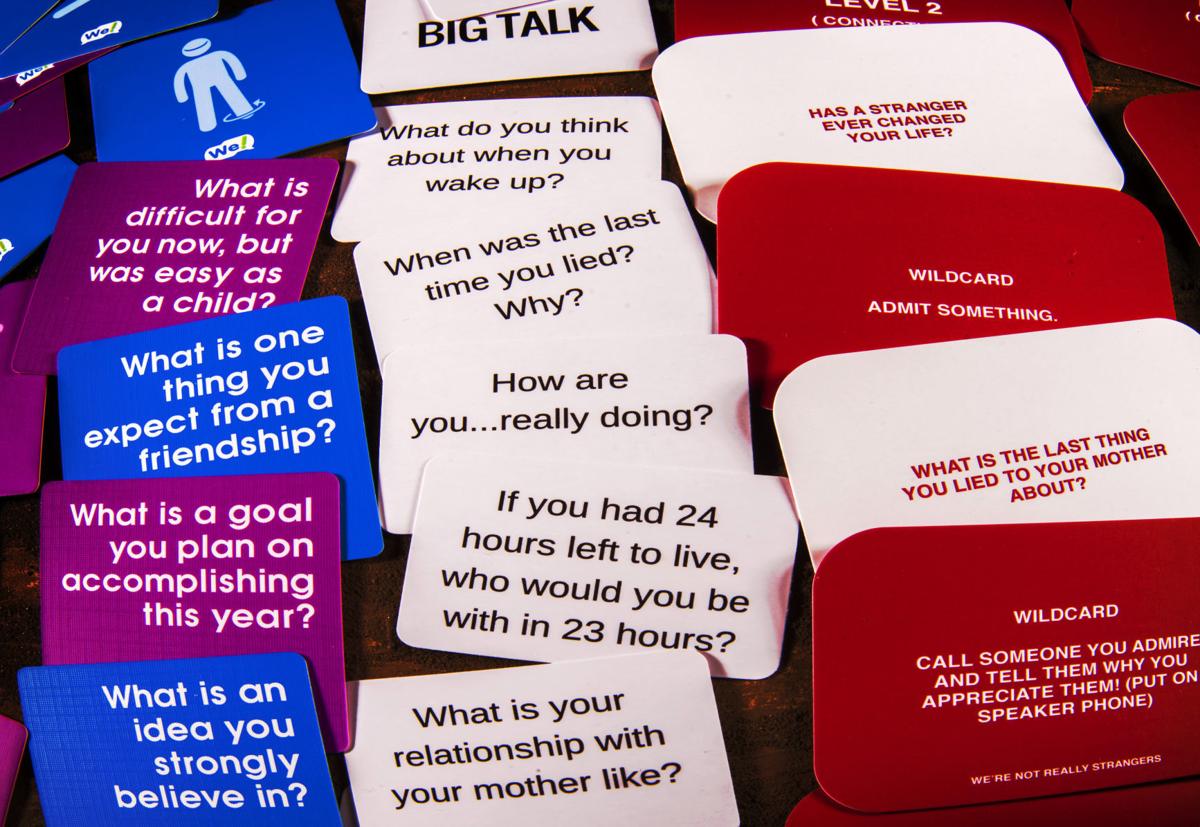 Cards, from left, from the games We! Connect Cards, Big Talk and We’re Not Really Strangers have some serious questions for anyone who dares to “play.”

When Sandra Mary Mathoslah suggested playing a card game with her in-laws on a Sunday afternoon, she didn’t know it would result in tears.

Mathoslah, a 33-year-old pharmacist, had suggested they play the game, called Uncurated, over Turkish coffee and fruit tarts in her Bethesda, Md., studio apartment. Her husband’s parents, Gwen and Attalah Sayegh, were good sports and agreed to try this “game of questions and answers,” as Mathoslah had cryptically put it to them.

Things got emotional — and not in a flip-the-Monopoly board-and-storm-off kind of way. The probing questions printed on the Uncurated cards had them wrestling with long-buried things that suddenly might see the light of day.

Mathoslah’s husband, Munir, drew a purple card that asked, If you could go back and change one decision, what would it be? His wife was shocked to learn he had second thoughts about spending as much time as he did at Purdue University, where he worked for five years. Her father-in-law pulled another that read, What is one time you wish you didn’t ignore your gut instinct? He declined to answer, but Mathoslah knew something was sealed behind his lips.

Then came the tears. If you could share one message with the world, what would it be? asked one sea-foam-green card to Mathosalah’s mother-in-law. Her eyes started to well up.

“I wished that everyone could have a relationship with Jesus Christ, but I knew that wasn’t possible,” Mrs. Sayegh told The Washington Post. “So I said I wished everybody would share their goods so there would be no hungry people.”

Mathoslah knew her mother-in-law to be a sweet woman but had no idea this concern pressed so hard on her heart.

If you don’t like card games, or watching people bare their souls, or examining yourself as a person, Uncurated’s brand of prompted conversational self-reflection sounds nightmarish. Even to those who are open to opening up, Uncurated’s gimmick might sound a little hokey.

But card games aimed at getting deep are proliferating. We’re Not Really Strangers (WNRS). Big Talk. SoCards. We! Connect Cards. Known Project. These games are often pitched as antidotes to loneliness and isolation and facilitators of self-discovery and personal growth.

“It’s about expanding your paradigms and growing in empathy,” said Cherini Ghobrial, 28, who created Uncurated. “When you share with each other, you see each other. And you see yourself differently.”

Sydney George, 20, has played WNRS only one-on-one with her boyfriend. Three rounds of questions, three levels of intensifying introspection. She drew a card that asked How are you, really? “I honestly started crying,” the Austin, Texas, native said. “I honestly didn’t know how I was.” Between jobs as a creative assistant at her local church and a food runner at a seafood restaurant, her daily life is a gantlet of tasks with little room to check in on her feelings. It felt good to be asked.

No rules and no winners or losers

Not every game set comes with a list of guidelines attached, and when guidelines do appear they’re broad enough to function more like suggestions than laws. You pull a question and could answer it about yourself. What is one thing you wish you never believed? If that one hits too close to home, then skip it. Or ask it of another player who’s more gung-ho about the mindfulness thing. Or pose the question to everyone else and go around the room. There’s no way to win these games. You can’t exactly cheat, unless you “cheat” yourself by answering untruthfully.

It’s a recipe for a different kind of game night than some people are used to. “I had brought the game and been like, ‘This is a game we have to play,’ and my friends definitely gave a leery response,” said Julia Kennedy, 28, a Los Angeles-based digital marketer who purchased a WNRS deck. “They were like, ‘It sounds so serious,’ like it’ll take us to dark places.”

They had wine and snacks to lighten the mood. Kennedy got to ask herself: What do you think people’s first impressions of you are? Loud and obnoxiously chatty, she said. Her best friend told her that those were thoughts that never crossed his mind. It dawned on Kennedy that those fears locked up in her head might just be fears, not defining traits.

“It’s a deep game,” Kennedy said, “but that doesn’t make it depressing.”

Informal questioning cards are carving their niche in schools and the working world. We and Mesells decks of We! Connect Cards boasts Disney, Cigna, JetBlue Airways and Starbucks on its list of clients. Irene Parisi, chief academic officer of the public school system in Greenwich, Conn., recently ordered decks for all 1,100 of her teachers.

Fallene Wells, owner of Let Em Have It Salon in Denver, uses question cards from the game Big Talk to create bios for her new hires and figure out how her current staffers think. Three days a week, she says, Wells leads a morning huddle and starts off with a Big Talk question. What would be the first thing you would grab if your house is on fire? One of her employees said their mattress. The image of them lugging a queen-size out of a burning building had the whole group laughing.

In 2017, Mike Lee, a 39-year-old film producer, was living in Seoul, close to broke and depressed. He stumbled across Big Talk and later hosted his own gatherings. Guests would pick questions from buckets and be encouraged (though never forced, Lee says) to bare their souls. It was a way of feeling close to people again despite being hundreds or thousands of miles from friends and family.

Lee remembers one woman pulling a card that asked her, What is the biggest secret you have? She shared a story about getting groped on the train to school in India when she was a child and being told by her teacher that she’d just have to deal with it.

The woman cried when she shared the story, Lee says, and other guests comforted her and offered support.

Nobody had won, or lost. It wasn’t a game at all.

CONCORD -- Surviving family members and elected officials evoked tragic losses from accident scenes in Randolph and Bow in their support of tougher criminal penalties for harming others while driving impaired.

CIREGLIO, Italy — As Americans mourned NBA legend Kobe Bryant on Monday, fans and friends in Italy remembered a lesser-known chapter in his life when he played in their streets as a boy while his father competed in the local basketball league.

OSWIECIM, Poland/TRONDHEIM, Norway — Edith Notowicz first saw Nazi SS doctor Josef Mengele when she arrived at the Auschwitz extermination camp in May 1944, after several days crammed into a cattle train so packed that by journey’s end she and her family had to sit on the dead.