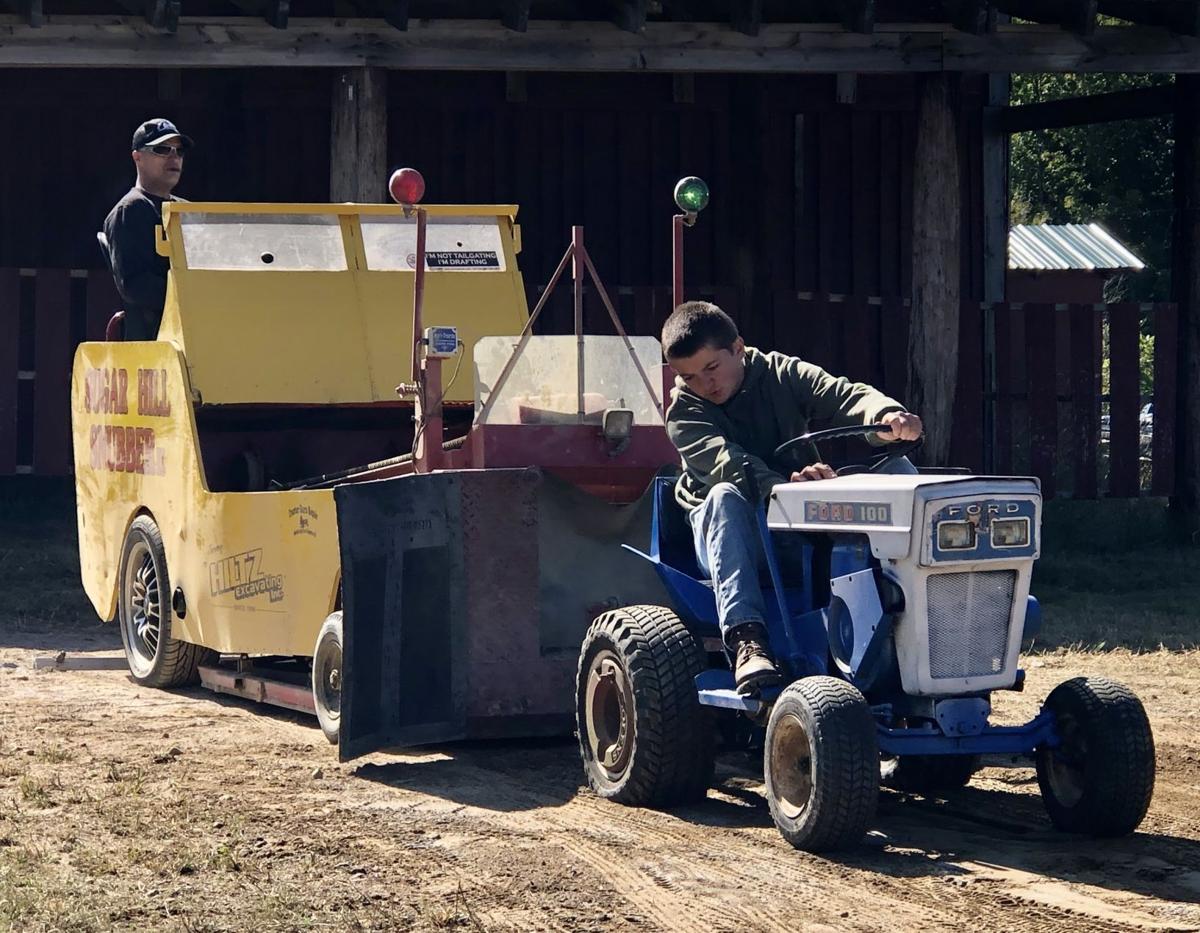 Mason Farmer checks his footing and tires during a mini-tractor pull at the Belknap Fairgrounds Saturday. 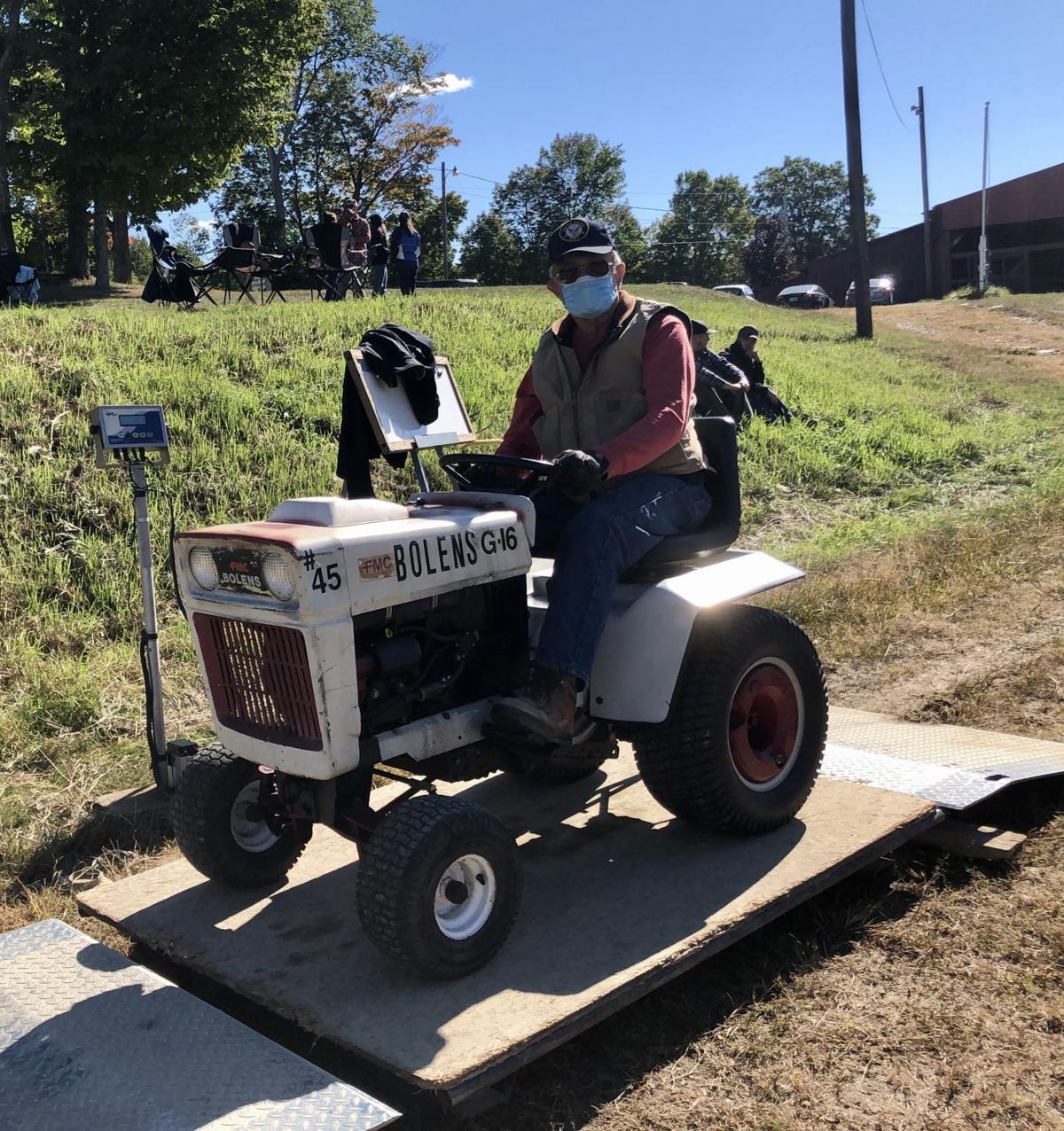 Clyde Sauls of Bradford weighs in his vintage mini-tractor before the competition begins at Saturday’s pull.

Mason Farmer checks his footing and tires during a mini-tractor pull at the Belknap Fairgrounds Saturday.

Clyde Sauls of Bradford weighs in his vintage mini-tractor before the competition begins at Saturday’s pull.

For a 13-year-old participating in only his second mini-tractor pull, he gladly explained the technique he was planning to use while riding his blue and white Ford 100.

“Make sure you’re not spinning the tires too much but fast enough to smack some traction,” was his advice.

Mason is a member of the Sugar Hill Snubbers of New Hampton — a self-contained mini-tractor pull group that travels to fairs throughout New England and wages friendly competitions among its members.

According to Clyde Sauls of Bradford, a 20-year-veteran of tractor pulling, the events are popular, especially in farm communities in Northern Europe and in the regional fair circuits in North America. The Sugar Hill Snubbers usually make the fair circuit in New Hampshire, with the occasional foray into Massachusetts.

A snubber, he said, is a sled with a weight that moves forward the further it is pulled, which causes more weight to move to the rear of the pulling mini-tractor. Over the course of a single pull the front end can rise off the ground and the tires can sink into the dirt track, halting forward progress.

“There’s a whole generation of them in Pennsylvania and Missouri” he said.

The maximum allowed speed is 4 miles per hour, said Sauls, and a very loud alarm goes off if a driver exceeds the speed limit.

According to Belknap County Fairgrounds President Brian DeNutte, this is only the second event to be held this season because of COVID-19.

Saturday’s event was admission free and was largely put on by the Sugar Hill Snubbers. The fair staff was selling hamburgers and hot dogs to try and raise a little revenue, DeNutte said.

“We had no money coming in this summer, but we have quite a lot of staff,” DeNutte said, adding that the fairgrounds is fortunate that it has no debt.

To offset the loss of revenue, DeNutte said the fairgrounds are tenting some space over the fall and winter for a limited amount of boat storage to a local marina as well as renting some of the parking area to people who want to store their campers over the winter.

“We want to show that we are still here,” he said.

And for the fairgrounds, DeNutte said the Sugar Hill Snubbers are perfect because they bring their own equipment, including a sound system, electronic devices to measure distance and speed, and most-importantly, the snubber.

Saturday’s event, he said, was a demonstration but normally the group charges a venue for the entertainment.

DEAR ABBY: My sister-in-law “Brenda” often takes it upon herself to change a baby’s diaper during social gatherings with family. She never bothers to ask the baby’s parents if it’s OK to do this, and they never solicit her help. For years, I found it a bit strange, but never said anything to…

As they approach their first anniversary, Evelyn Ufomadu Arnold and her husband, Joseph Arnold, are laughing, joking and teasing each other during a phone interview.

Election Day is still two weeks away, but 136,137 people have voted absentee in New Hampshire, shattering the record for a presidential election set just four years ago. On top of that, more than 60,000 additional ballots were requested that have yet to be cast.

Dear Readers: Because of the coronavirus, we have become more aware of the importance of disinfecting and sanitizing. This may prompt us to hoard cleaning supplies, soaps, detergents, hand sanitizers, wipes, bleach, etc.