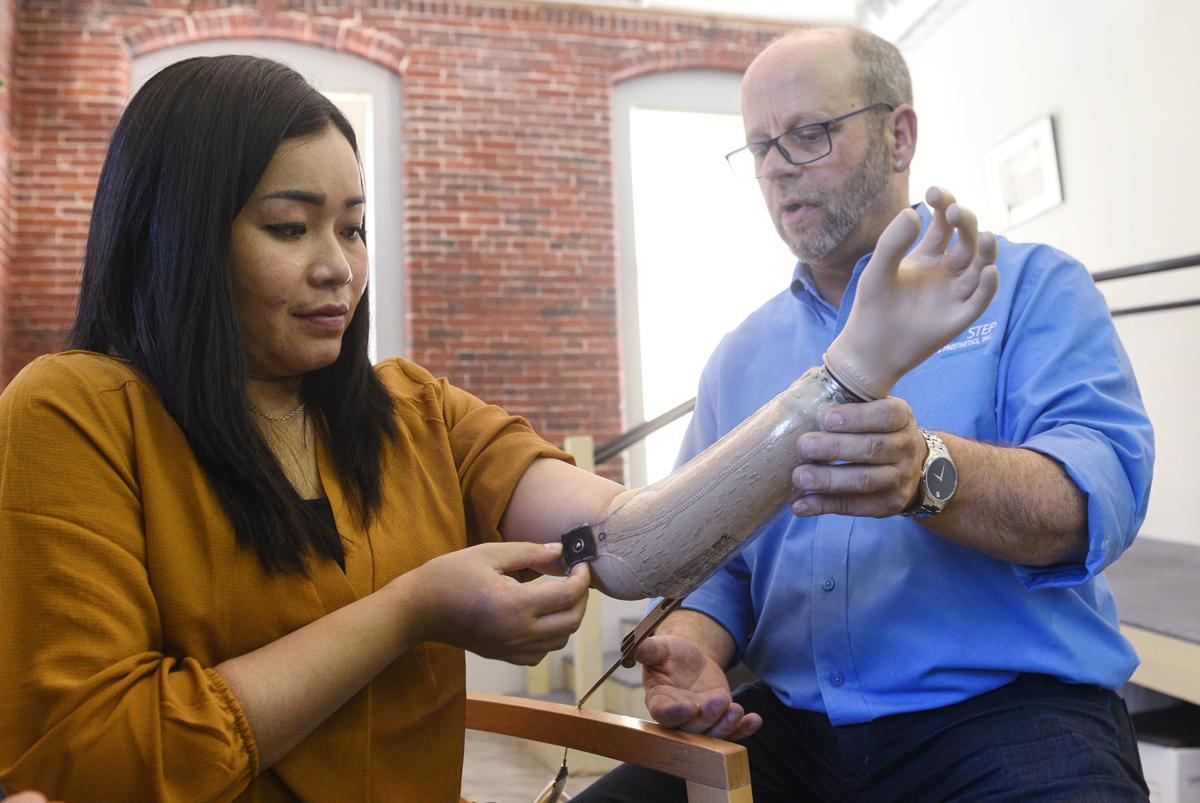 Nora, victim of a violent attack in her native Cambodia, is fitted for a new prosthetic hand Monday, Oct. 21, 2019, by Matt Albuquerque, founder and CEO of Next Step Bionics and Prosthetics in Manchester. 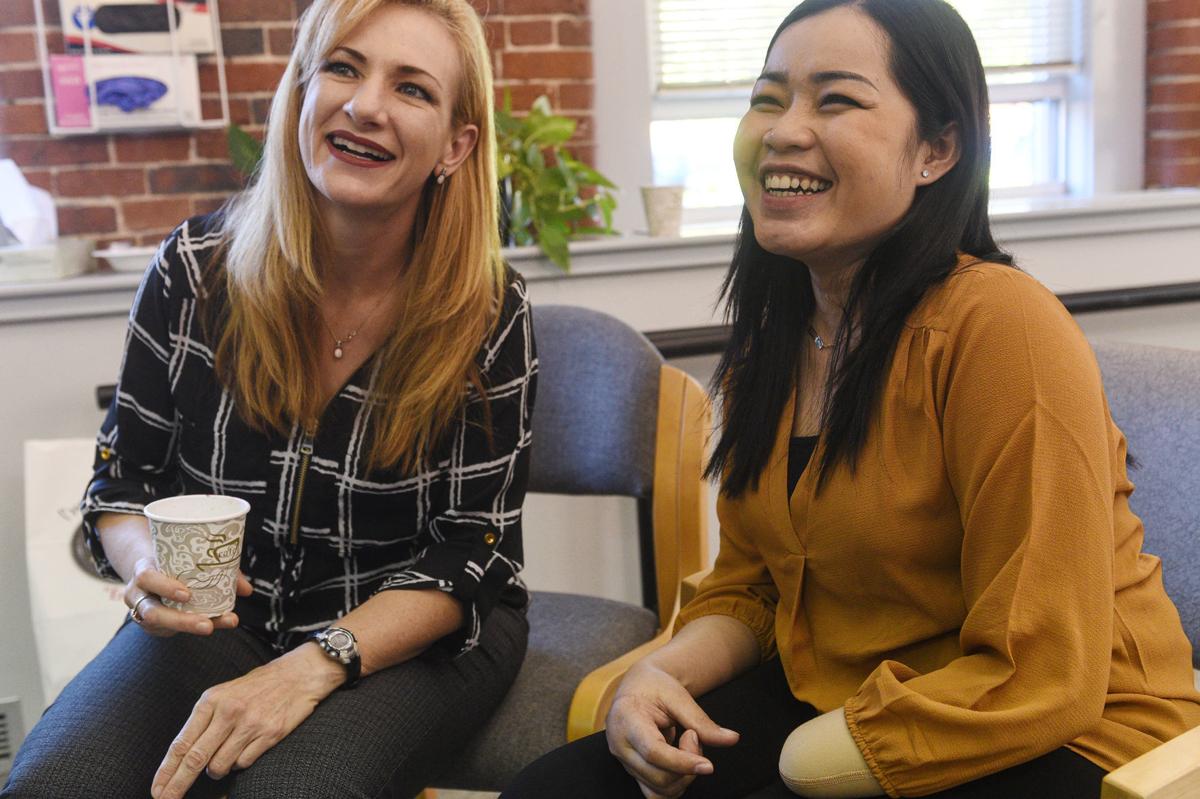 All Things Possible’s Holly Dziedzickie, left, runs the Girls House of Refuge in Cambodia where Nora recovered after a violent attack. The two were at Next Step Bionics and Prosthetics in Manchester on Monday, Oct. 21, 2019. 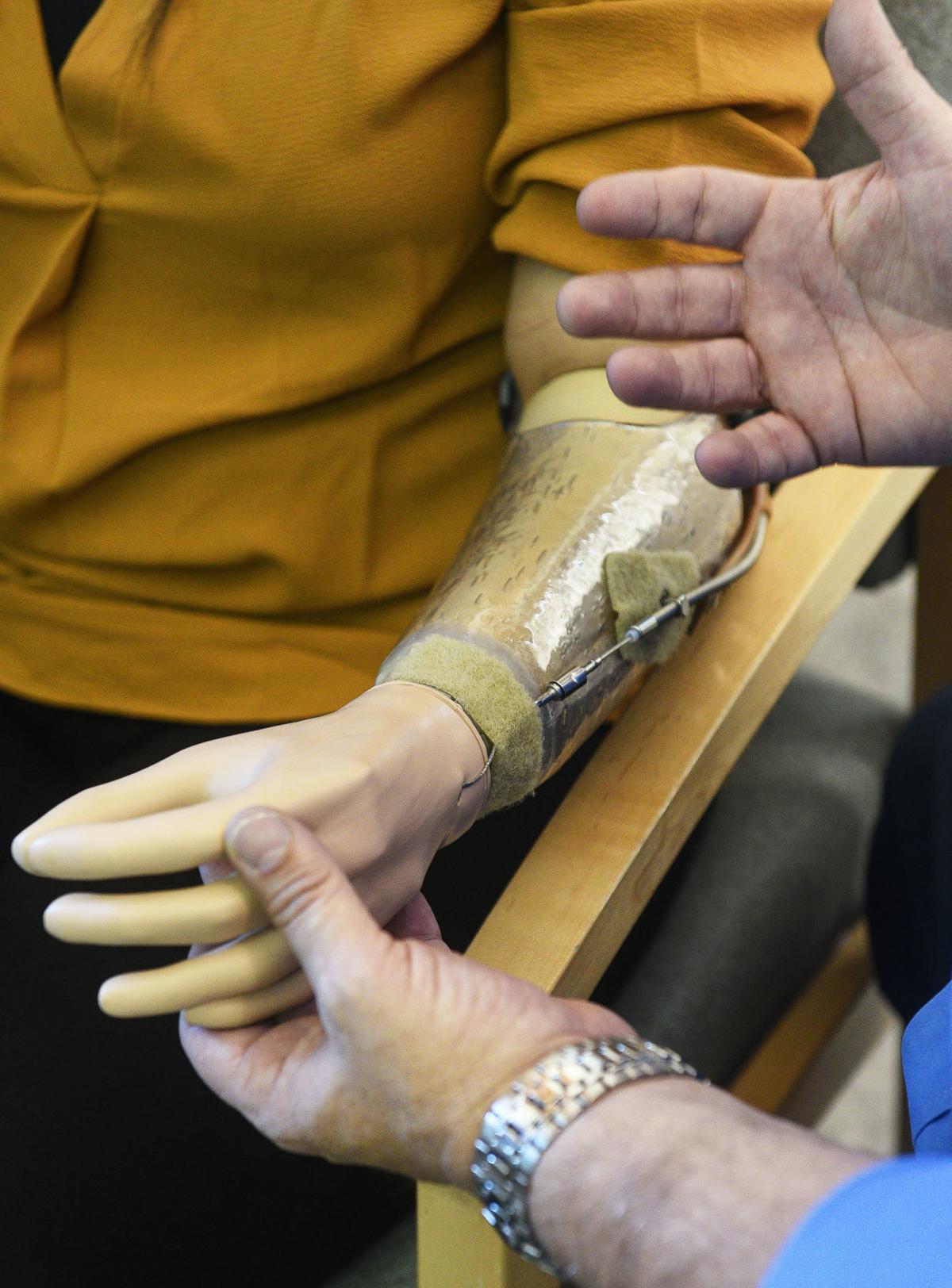 Matt Albuquerque, founder and CEO of Next Step Bionics and Prosthetics in Manchester, is hoping to send Nora home with a prosthetic that features the option of a hook or an artificial hand.

MANCHESTER — A Cambodian sex-trafficking survivor whose captor chopped off her left hand couldn’t contain her smile as she was fitted with a prosthetic Monday at Next Step Bionics and Prosthetics.

“I was just trying to live. This is just really amazing. This is an amazing gift,” the woman, identified as “Nora,” said through a translator. “I didn’t even think it was possible.”

Next Step Bionics and Prosthetics agreed to provide the prosthetic hand free of charge after learning of the horrific attack that left her clinging to life in a Cambodian hospital nearly eight months ago.

Nora still bears the scars — emotional and physical — from her ordeal on Feb. 27, when her assailant chopped off her left hand at the wrist. Her right hand has a scar that spans several inches where the blade of a butcher knife came down as she tried to protect the back of her head. She was also doused with battery acid, which left her with chemical burns on her face and neck.

Doctors at a Cambodian hospital left her with a stump just below her left elbow. Nora eventually moved into a women’s home run by All Things Possible Ministries, an American faith-based organization that set about getting her a prosthetic.

Next Step has been fitting amputees with prosthetics since 1996. Founder and CEO Matt Albuquerque’s philanthropic efforts have also included helping survivors of the Boston Marathon bombing in 2013 and members of the military who lost limbs. Albuquerque didn’t hesitate once he heard Nora’s story.

“I would never turn something like this down,” Albuquerque said. “To get paid for something is great. That’s what we all do so we can provide for our families. To do something just because it’s the right thing to do feels even better.”

Connecting Nora with Next Step was a collaborative effort. All Things Possible Ministries founder Victor Marx contacted Mark “Oz” Geist. A fellow retired Marine, Geist was an American contractor who survived the terrorist attack on a diplomatic compound in Benghazi, Libya in September 2012.

Geist reached out to Phil Taub, a Bedford lawyer who founded Swim With a Mission with his wife, Julie, and has been sponsoring an annual fundraiser at Newfound Lake featuring demonstrations by Navy SEALs. It was Taub who reached out to Albuquerque.

“When Victor told me about Nora’s story. I just felt that it was one of those things — I knew I wanted to make a difference somehow. I think the Lord put me in touch with Phil for a purpose and it ends up — well, here we are,” Geist said.

Taub joined Geist at Next Step on Monday as Nora started the process of receiving her new hand.

All Things Possible brought Nora to the United States a few weeks ago; the group has made several stops across the country, including California, Las Vegas and South Dakota before arriving in Manchester on Monday.

“It’s been a whirlwind,” said Holly Dziedzickie, director of the All Things Possible’s Girls House of Refuge. She translated for Nora on Monday.

Nora will spend the next few days in Manchester as the prosthetic is adjusted and fine-tuned while she trains with an occupational therapist from Catholic Medical Center.

Albuquerque said he was hoping to send Nora home with a prosthetic that features the option of a hook or an artificial hand, which is made to look like the real thing.

Nora broke out in a wide grin when Albuquerque placed the sleeve back on her arm after making a few adjustments.

MANCHESTER — New Hampshire marked its 20th official Martin Luthur King Jr. Day on Monday, with audiences hearing from the woman who signed the bill into law.

Gyrocopter crash pilot: ‘I might have used up my bucket of luck on that one’

NASHUA — The pilot injured in a gyrocopter crash at the Nashua airport last week says he is thankful he wasn’t more seriously hurt — and doesn’t remember a minute of the incident.

Hints from Heloise: The emergency card

Dear Heloise: I made an "emergency information" card with information I hope I never need.

DEAR ABBY: I have been dating a great guy for a year and a half.